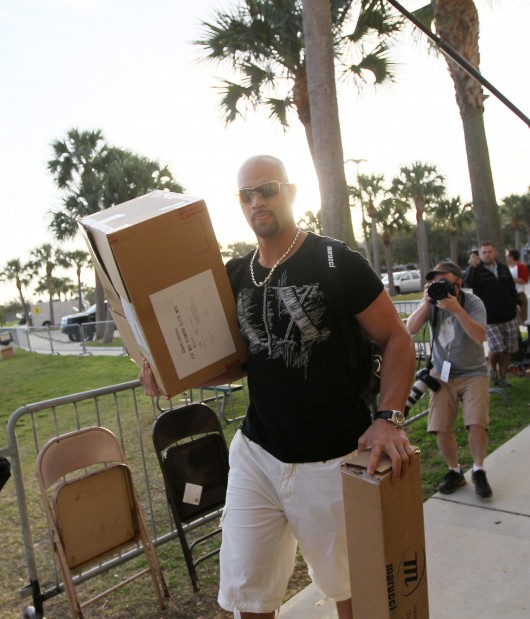 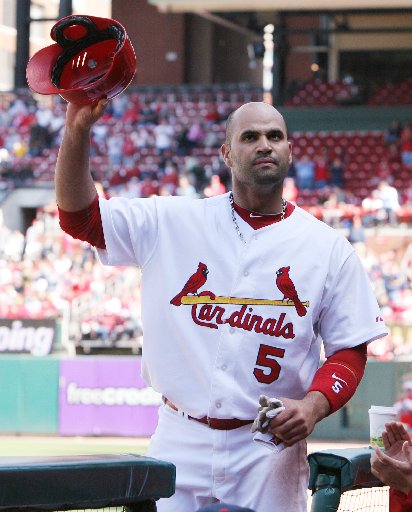 Among the things Albert Pujols was offered by the Cardinals in a modified contract proposal was an equity stake in the franchise. (Chris Lee / Post-Dispatch photo) 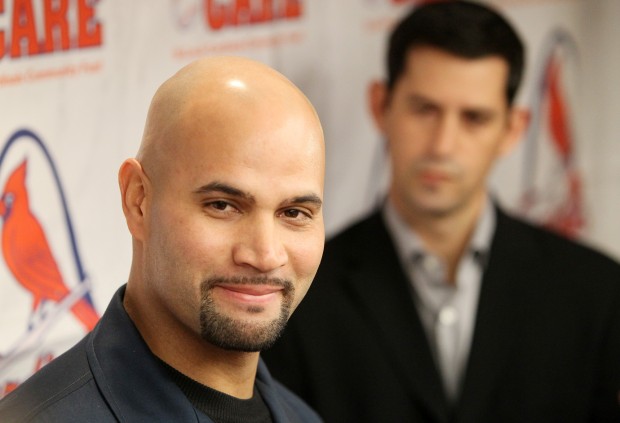 JUPITER, Fla. • The face of the Cardinals is due to enter camp today.

Before an overflow crowd of national media, the plight of the Cardinals achieved greater clarity Wednesday.

First baseman Albert Pujols took a significant step toward free agency when an 11 a.m. deadline expired regarding talks about a contract extension for the three-time National League MVP.

Despite what the club described as a 'substantial, long-term offer" first extended in early January and tweaked several times since, the Cardinals and Pujols never achieved traction on a deal that could have allowed the franchise to secure its signature player for the balance of a Hall of Fame career.

While Cardinals Chairman Bill DeWitt Jr. and general manager John Mozeliak declined to discuss specifics of the team's initial offer, sources familiar with the process described the package's total value at more than $200 million over nine or 10 years. Once rejected, the deal took several other forms that involved shifting years and salary and apparently even an equity stake in the team.

"We are greatly disappointed in this outcome of negotiations that we've had over the last number of months," DeWitt said to open a news conference at Roger Dean Stadium.

DeWitt recognized Pujols as "a great Cardinal ... an iconic player" before noting that the organization made "every effort" to extend his contract beyond the upcoming season. Ultimately, however, the sides never approached common ground, leaving Pujols to officially enter the "walk year" of an eight-year, $111 million deal signed in February 2004.

Neither the club nor Pujols' agent, Dan Lozano, divulged terms of the Cardinals' original offer or any of several modifications advanced as recently as last week.

"Obviously any negotiation always evolves," Mozeliak said. "This was certainly a unique process and one that we had hoped of getting it done. Unfortunately, today we are here to say we didn't."

At over $200 million, the offer would have represented the third-largest contract in terms of gross dollars in the game's history. However, its average annual value reportedly would have ranked well behind the game's highest-paid player, New York Yankees third baseman Alex Rodriguez. One estimate placed the average annual value at $19 million to $21 million, another set it at $19 million to $23 million.

"While both parties were hopeful that an agreement could be reached, a difference of opinion in determining Albert's value simply could not be resolved," Lozano said in a prepared statement.

Lozano set the deadline. Now that the deadline has lapsed, DeWitt and Mozeliak insisted Wednesday that any call to restart the process before season's end belongs to Pujols' representation.

"At this point we do feel we will honor their request in terms of not opening up negotiations in spring training or through the season," Mozeliak said. "Should that change from their end, we would be willing to listen."

A statement by Pujols, released Wednesday night by his agents, underscored his respect for the organization and desire to bring another championship to St. Louis.

Pujols is quoted, in part, as saying: "I have made it very clear that I do not want any of this to be a distraction during the season, and it was for that reason, that we came up with a deadline. I hope that the media are respectful toward my family, my teammates, coaches and the Cardinals organization in honoring this request. I have the utmost respect for Mr. DeWitt, Mo and the rest of the Cardinals organization, and the path that these negotiations have taken will not impact our relationship moving forward in any way."

Pujols, 31, did nothing to damage his value during a 2010 season in which he led the NL in home runs and runs batted in while winning his second Gold Glove. Lozano called Pujols' first 10 seasons "nothing short of historic." But the Cardinals' reported proposal failed to eclipse the average annual value of Howard's extension.

"The expiration of today's deadline does not eliminate the possibility of Albert returning to the Cardinals in 2012 but simply delays negotiations until the conclusion of the Cardinals' season," Lozano, who could not be reached for further comment, said in his statement.

The Cardinals remain sensitive to charges of foot-dragging in talks with a player they drafted, developed and have celebrated during a 10-year career that has produced a .331 batting average, 408 home runs, 1,230 runs batted in and a 1.050 on-base-plus-slugging percentage.

"We tried last offseason, so maybe the third time will be the charm," DeWitt said. "As one becomes a free agent, obviously that is a point when he goes in another direction or stays with the Cardinals. I'm not saying there wasn't urgency, because there was. We did make every effort. We started the process early. We got our offer out early. We had a good dialogue all along. It wasn't that we ran out of time. It's just that we were unable to reach an agreement."

Mozeliak described the tone of negotiations as "positive."

"Obviously each side had different goals," Mozeliak said. "That's what we were trying to align. Unfortunately, as we sit here today, we were unable to do that. I don't think any bridges were burned in the process. When you look to next year, I don't think we put ourselves in a bad position. When that time comes, we'll revisit it."

Pujols' reaching free agency would put the Cardinals in a competitive environment where rival clubs will shape his value. DeWitt noted the club's ability to address a changing environment but also recognized its limitations.

"We'd like Albert to continue (with the Cardinals). He is an iconic player. He helps us win. He has helped us win," DeWitt said. "It's a process we have no control over. If he chooses to go elsewhere, he chooses to go elsewhere. That's the business we're in. The players are mobile in this generation. In the end, if he doesn't stay a Cardinal — which we'll make every effort that he does stay — we'll be out there trying to win a division and championships just like we have in the last 15 years."

The Cardinals found themselves in an uncomfortable position of trying to set Pujols' market alone. DeWitt in December said he would not be governed by what he considered bad contracts, but on Wednesday he declined to take issue with specific deals, including the $275 million package Rodriguez signed in December 2007.

DeWitt recognized that a competitive market could offer advantages.

"You do have clarity," DeWitt said. "That's obviously something we don't have (now) because you don't have other teams able to say, 'We'll do this or that.'"

DeWitt acknowledged that the club is not assured right of first refusal if Pujols reaches free agency.

Once Pujols reaches camp today, the Cardinals insist he is going nowhere the rest of the season. Mozeliak dismissed any notion that the club might attempt to trade Pujols, who enjoys veto power over any deal due to his major league service.

Yet some of Wednesday's comments made clear the club's ability to envision playing next season without him.

"I think we'll be judged on how our club performs without Albert if he goes to another club," DeWitt said. "We're committed to winning, and we're committed to spending the resources to win. That's what the Cardinals are all about."

DeWitt found perspective in Pujols' previous deal, recalling questions by fellow owners about signing Pujols to a then-record deal for an arbitration-eligible player.

Asked whether he had regrets about the terms, DeWitt proved prescient.

DeWitt taking a gamble by not signing Pujols

Cardinals chairman DeWitt is gambling that Pujols and agent are miscalculating his value in open market. Pujols arrived in Florida this morning.

Pujols arrives with no grudges

Failure to reach agreement "doesn't mean I don't want to be a Cardinal."

They're shocked that Cardinals didn't approach the negotiations with more urgency.

Analysts weigh in on Pujols

JUPITER, Fla. • The announcement by both sides that any further negotiations between the Cardinals and Albert Pujols about a contract extensio…

Duncan pleased with pitchers in camp

Coach is notably impressed by Lance Lynn and some of the young arms.

July 31 • The nonwaiver trade deadline. Pujols has the right to veto any trade, based on his tenure. Cardinals officials said Wednesday they w…

Cub fans can only hope for a shot at Pujols

CHICAGO • For perhaps the first time in its angst-ridden history of anticipation, the Cubs organization now has a very good reason for spendin…

Will Pujols be wearing Cardinal red in 2012?

Our insiders offer mixed opinions; one says 'it's insane' paying that much to one player

Among the things Albert Pujols was offered by the Cardinals in a modified contract proposal was an equity stake in the franchise. (Chris Lee / Post-Dispatch photo)