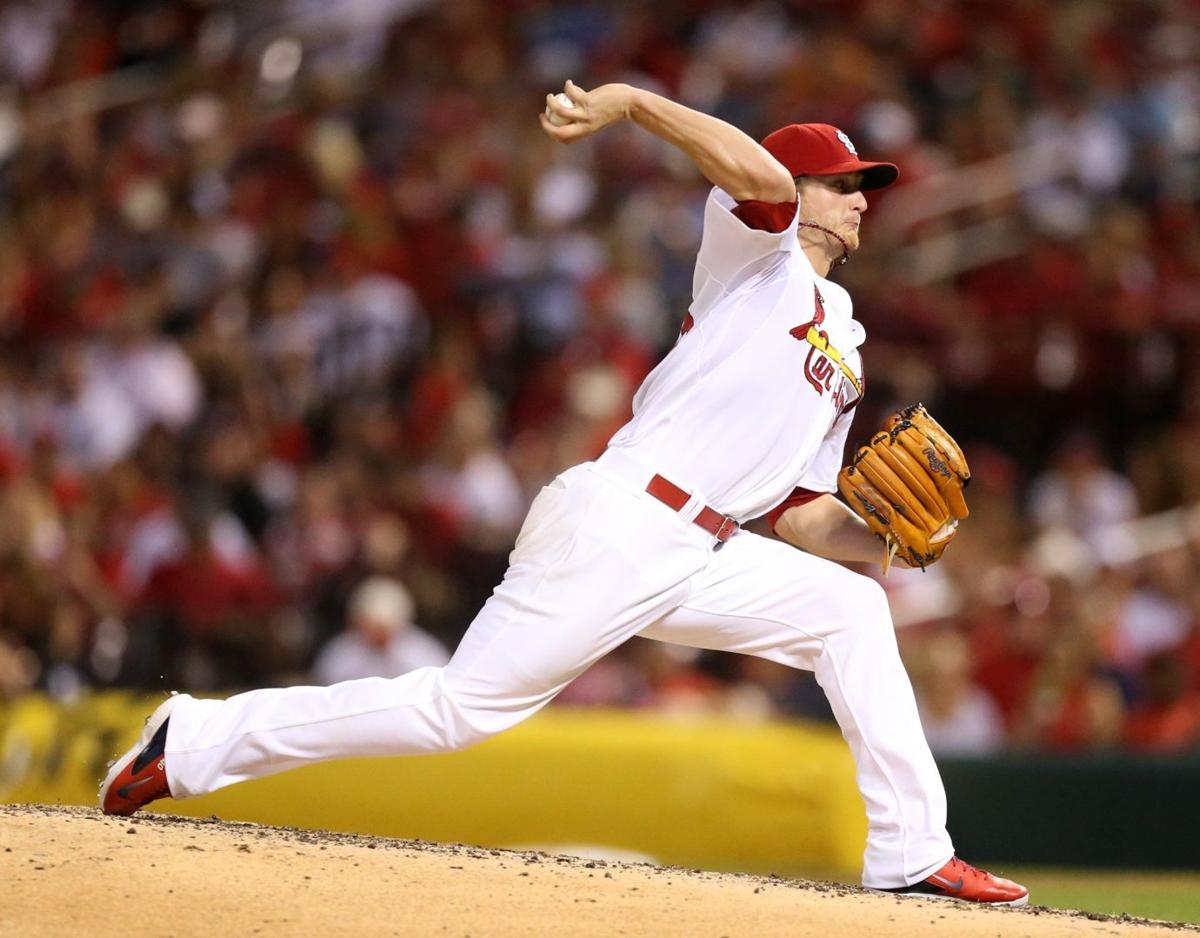 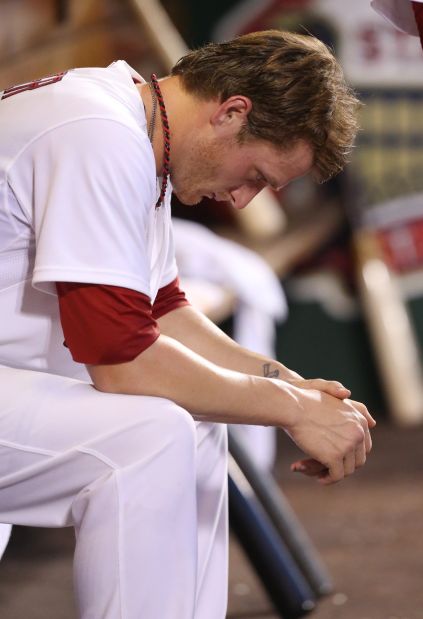 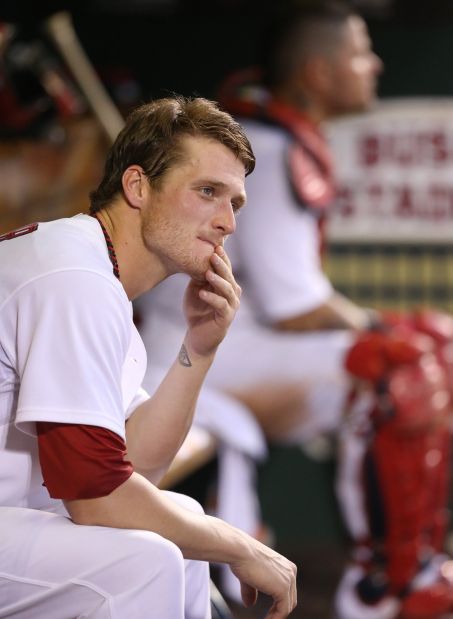 Whatever the Cardinals’ lineup did late to gamely deflate the New York Yankees’ bloated lead proved merely cosmetic because of the bruising Shelby Miller took early.

Before they got a run, his start was already in ruins.

The Yankees jumped Miller for nine hits and seven runs, both of those totals a career-worst for the young righty, in a 7-4 victory Wednesday at Busch Stadium. The Yankees strafed Miller for four-run and three-run innings that created a gulch too deep for the Cardinals’ lineup to scale. Matt Carpenter and Kolten Wong made an attempt with a combined six hits, including a career-high four from rookie Wong. But Miller’s troubles meant no matter what the offense did, a raucous interleague series between members of baseball royalty ended flat, with a dud.

“Rough night,” Miller said. “Gave up big hits in big situations. … Just an all-around bad game for me. Didn’t have it.”

With a combined 38 World Series championships between the two franchises, the series brought history to St. Louis’ doorstep and made a little along the way. Retiring Yankees shortstop Derek Jeter was feted at every opportunity, including an impromptu standing ovation in the seventh inning Wednesday when the scoreboard camera showed him in the dugout. He went to the top step and doffed his cap to the sellout crowd of 45,267 for his only appearance of the evening. The 1964 championship Cardinals team held a 50th anniversary reunion, complete with a ceremonial first pitch thrown by Bob Gibson and caught by his catcher that season, Tim McCarver. For the Cardinals, Lance Lynn topped the three-game visit from the Yankees with his first career shutout Tuesday night.

Lynn’s nine scoreless innings continued a dominant turn for the rotation, one that ended with a thud in Miller’s game. The previous four starters had allowed a total of five runs in 29 2/3 innings.

Miller had allowed seven by the end of the fourth.

“He just didn’t have it,” manager Mike Matheny said. “The third inning hit and they were just on everything. You didn’t see a lot of bad swings, no matter what we threw up there. The timing was right on for a couple of innings and then the damage was done. One of those nights where everything seemed to be right where they were putting the bat. …

Since he gave Miller (6-4) a succinct, stern and nationally televised admonition on the mound in Pittsburgh several weeks ago, Matheny has sought to soften the apparent tone of that talk while not taking away from its impact. Before Miller’s start Wednesday he called the conversation “a little redirection,” and he lauded how the righty “responded extremely well.” The drifts in his delivery that the Cardinals saw during Miller’s starts had diminished, and Miller insisted that his mechanics were in tune through his start. He even felt his command was reliable.

The Yankees certainly offered Miller a lineup that had its tender spots, what with 1,019 career home runs on the bench in Jeter, Alfonso Soriano, and the injured Mark Teixeira.

During his shutout on Tuesday, the Cardinals' only win in the series, Lynn had a sharp breaking pitch, and he described how he "pitched backward" to ground the Yankees. Miller had a similar approach. The fastball-based righty pitched off his curveball more than usual, and the Yankees had a lot of first-pitch whacks as they ambushed him for the seven runs total in back-to-back innings.

“I don’t know if I was tipping it or what,” Miller said. “We threw a lot of 0-0 breaking balls. When I’ve been pitching it’s usually 0-0 when my breaking pitch has been fouled off or taken. Not this year. It could be this is a Yankee team used to seeing 0-0 breaking pitches. They were good pitches, but they were strikes.”

A walk sparked the four-run jag in the third inning. Brett Gardner took it and then raced for third on a Brian Roberts single. Jacoby Ellsbury singled and had the first of his three RBIs off Miller. Miller gave Brian McCann a strategic walk, as Lynn did the night before, to load the bases again and give himself a chance to escape. On the first pitch Miller threw after the walk to McCann, No. 5 hitter John Ryan Murphy flipped a single to right to score two runs. Murphy hit a curveball that Miller said had good placement. It was another first-pitch curve. It didn’t fool him.

Roberts doubled and Ellsbury had a two-run single in the fourth inning to extend the Yankees’ lead to 7-0.

Each time he got on base Ellsbury stole second without resistance from Miller.

Matheny said sometimes a pitcher looking for results can lose his attention.

“That’s on all of us,” Matheny said. “What we’re trying to do is figure out a way to get him through. Ideally, everybody is still mixing up their times (to the plate) and realizing this game is still being played and we’ve got outs to get. They just made an aggressive jump and timed it perfectly. That’s just something that cannot happen on all of our parts.”

The Cardinals had a chance to immediately answer the four-run burst by the Yankees in the third. They loaded the bases with two outs, and Yadier Molina popped up to the second baseman to end the threat. That set a theme. Although the Cardinals scored single runs in four different innings, many of their threats came with two outs. Huroki Kuroda (4-3) didn’t pitch deep into the game, even with the big early lead, but he did short-circuit a few rallies.

Of the Cardinals’ 13 hits, seven came with two outs.

They were three for 15 with runners in scoring position.

Wong had a base hit in each of his final four at-bats, and he scored in the fifth inning on Allen Craig’s groundout. He drove home Carpenter in the eighth after the leadoff hitter doubled for the second consecutive at-bat. Carpenter had an RBI in the sixth inning by pushing home pinch-hitter Jhonny Peralta. The Cardinals nibbled into the lead.

They never got a chomp.

In the ninth, the first two batters of the inning reached and brought the tying run to the plate. Yankees closer David Robertson retired the next three batters, all on strikeouts, to end the game, officially. It had effectively ended much earlier with Miller holding the ball.

“There’s (room for) a lot of improvement in a lot of places right now,” Miller said.

Breakfast with Bernie: Cards try to rebound vs. Giants

On today's edition, Bernie Miklasz previews the Cardinals 4-game series vs. the league-best Giants & looks back on a disappointing series vs. …

Cards Talk: Fans sound off on all things Cardinals

On today's Breakfast With Bernie, the Post-Dispatch's Bernie Miklasz previews the Cardinals 4-game series vs. the league-best Giants & looks b…

Leadoff man continues to heat up while No. 2 hitter Wong has four-hit night.

In the first round of voting, Molina leads all NL catchers. Also: Adams sidelined by a sore calf.

Cards need some offense, so something has to give.

Bird Bytes: Holliday's power, plus 4 quick takes on the Cardinals

No 3 hitter has declined in slugging percentage over the past 3 seasons, but he still rates among the most consistent hitters in MLB.

Breakfast with Bernie: Comparing the Cards and Yankees

The Yankees have spent $1 billion more than the Cardinals over the last 10 seasons. Bernie Miklasz says the "DeWitt Way" is better.