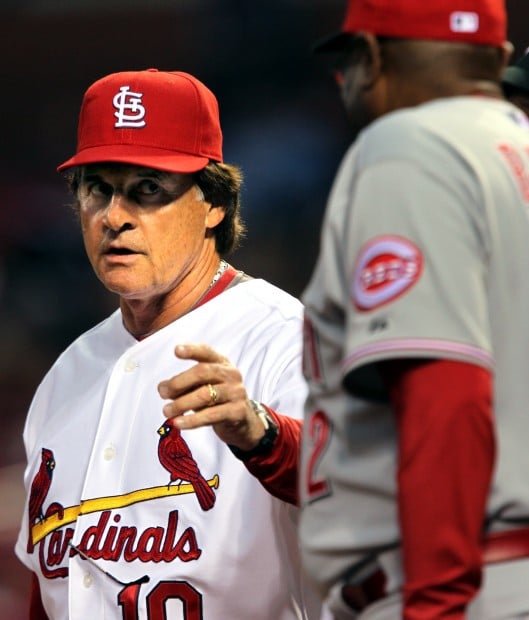 Tony LaRussa and Reds manager Dusty Baker talk as they deliver their lineups to umpires before a 2010 game at Busch Stadium. (Photo by Robert Cohen / rcohen@post-dispatch.com) 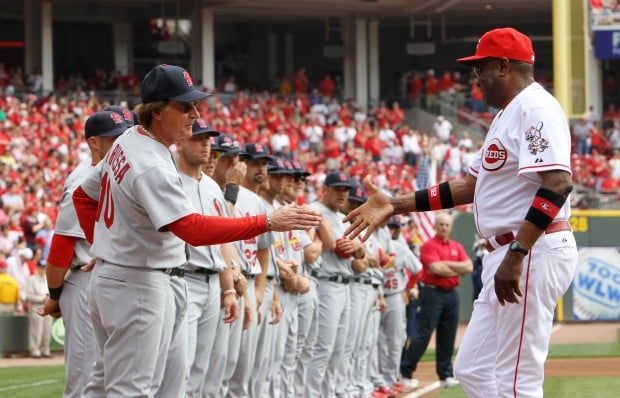 The big numbers — and the little ones — speak to Cardinals manager Tony La Russa's success as a major-league manager.

More than 2,600 wins overall and exactly 1,301 as a Cardinals manager. No living manager has won more games overall, and only two dead ones have — Connie Mack and John McGraw.

Two also is the number of managers who have won World Series in each league. La Russa is one of those. Sparky Anderson is the other.

But the manager La Russa will battle this weekend — in strategy only, if the umpires have anything to say about it — has a good chance to do something this year that only one other manager has done.

Cincinnati's Dusty Baker, if his Reds can hold their suddenly monstrous lead of eight games over the Cardinals in the National League Central Division, will be the second manager to take three different teams into the postseason in a nine-season span.

Previously, Baker had the San Francisco Giants in the 2002 World Series and the Chicago Cubs almost in the 2003 World Series, except for a Florida rally fueled by overzealous Wrigley Field fan Steve Bartman.

Billy Martin had three different clubs in the American League playoffs in an eight-season span with Minnesota (1969), Detroit (1972) and the New York Yankees (1976).

Baker also would tie Hall of Famer Bill McKechnie for taking three different National League teams into the playoffs. McKechnie managed the 1925 Pittsburgh Pirates to a World Series title, steered the 1928 Cardinals into the World Series and won the World Series with Cincinnati in 1940 after losing it with the Reds to the Yankees the year before.

The La Russa-Baker matchup has been a delicious, and occasionally messy, one over the years as each has lost his temper and good graces in the heat of battle.

They have opposed each other in the National League every year since 1996, excluding 2007 when Baker was an analyst for ESPN between his Cubs and Reds jobs.

For the record, La Russa's Cardinals teams have a 95-93 edge over Baker's clubs with San Francisco, the Cubs and Cincinnati, and that includes the Giants' 4-1 win over the Cardinals in the 2002 league championship series.

That was the first year the two skippers really went at it for the first time.

In Game 1 of the NLCS that year, the Giants' Kenny Lofton homered off Cardinals starter Matt Morris and took a slow trot around the bases as Morris glared at him. When Morris was lifted with the Giants ahead 7-1 in the fifth, reliever Mike Crudale zipped a pitch inside to Lofton, who turned on Cardinals catcher Mike Matheny, who then confronted Lofton.

La Russa and Baker were almost nose-to-nose before the umpires intervened.

"It's a trick that I've seen (Lofton) pull before," La Russa said at the time. "It caused a lot of stirring around and people saying nasty things to each other."

Baker then said, "I didn't think we overreacted at all. What are you going to do when a guy throws the ball up around your head?"

Baker and the Cubs

The next year, as the Cubs overtook the Cardinals by winning four games out of five in an early September series at Wrigley Field, tensions heightened when the teams engaged in something of a beanball duel as pitchers Matt Clement of the Cubs and Danny Haren of the Cardinals hit each other in the early innings and other close pitches resulted.

After some finger-pointing and shouting — some graphic — between the managers, they met on the field the next day for a five-minute conversation, ostensibly calling a cease-fire.

Baker had been irritated by what he considered La Russa's publicly counseling him to take control of pitcher Kerry Wood.

"Nobody intimidates me but my dad and Bob Gibson and a bully I had in elementary school," Baker said then. "And I grew bigger than him, so he couldn't bully me.

"(La Russa) has an opinion and I have an opinion. What was right, what was wrong, what was enough or whatever. ... It's a big series; a lot of emotions run high in this series. I'm not proud of myself when I display that kind of action because I don't really like that person when he comes out. And he rarely comes out unless he's provoked to come out."

The last couple of seasons have featured Cardinals pitching coach Dave Duncan claiming that tonight's Cincinnati starter, Bronson Arroyo, was using pine tar from his hat. This year, Reds second baseman Brandon Phillips' harsh description of the Cardinals escalated into Phillips and Cardinals catcher Yadier Molina having words the next night, and then La Russa and Baker shouting at each other during an on-field, benches-emptying scrum.

That action was highlighted, or low-lighted, by Cincinnati pitcher Johnny Cueto, backed against the screen, kicking Cardinals catcher Jason LaRue to the point that LaRue suffered a season-ending concussion. Crew chief Jeff Kellogg and his umpires handled the policing that night in the best possible fashion by ejecting both La Russa and Baker before there were any further shenanigans.

A spokesman for Major League Baseball said Thursday that MLB will inform the umpiring crew for this weekend's series of the managers' and teams' history and a "heads up" rather than warnings will be issued before tonight's first game. But MLB wouldn't have to do any updating if the same umpiring crew is on hand, which is a distinct possibility.

Despite it all, La Russa maintains that the relationship between him and Baker is a friendly one, and he goes back to 1986, when Baker was finishing his career with the Oakland A's and La Russa spent the second half of the season with the A's as manager after being fired as Chicago White Sox manager in June of that year.

Oakland had the worst record in the American League at 31-52 when La Russa took over. They went 45-34 the rest of the way and La Russa gives much of the credit to "the leadership of the club. It was Carney (Lansford), Dusty and one name that would surprise everybody that turned out to be a hell of a leader — Dave Kingman," said La Russa.

"At the end of the year, Dusty thought he could still hit. He had a bad knee and was looking for a job. Our organization wanted to go with Reggie (Jackson) as the DH the next year. So I lost track of (Baker) and he ended up not getting a job and the Giants hired him as a coach.

"I told him, 'If I had known you were going to retire, I would have tried to have you coach us because I always thought you had a gift for it.'"

"It's been aggravated because we're in the same league, and for several years (seven) we've been in the same division. But we have a good friendship."

La Russa concedes the two have an unusual fashion sometimes in showing that friendship, but he said, "Heat of the competition."

Baker agrees. "We're both competitive guys," he said. "He doesn't take much and I don't take much, you know what I'm saying?"

'our team vs. their team'

And now here are the Reds, at least a year ahead of what the experts figured, on the cusp of their first division title in 15 years. They have a sizable cushion before they take the field tonight, but Baker expects the Busch Stadium crowd to be revved up, although Cueto won't pitch anytime this weekend and Public Enemy No. 2 Phillips has missed a week of starts lately after being hit on the right hand by a pitch.

"I love St. Louis," Baker said. "And they'll probably be more hostile this time. They're not usually, but you know this time they will. But that's OK."

Baker's young team has a chance to learn from this weekend because it likely will be tested as much or more throughout September and probably into October.

As for the often highly charged matchup between the managers? La Russa would have said the same thing Baker did.

"Not important," Baker said. "It's our team vs. their team."

(Dan O'Neill of the Post-Dispatch contributed to this story.)

The series that could define the season

As the Cardinals look to save their season or play for 2011 this weekend, they'll need a power boost -- perhaps from Colby Rasmus, the kid who slugs .580 against Cincinnati.

Can Cards still catch ... anyone?

Our insiders say it's not about just chasing Cincy in the division and Philly in the wild card, there are others to worry about, too.

Poll: Prediction for the Cards-Reds series?

Cards Talk: Sound off about the Ryan trade

No shortage of blame for Cards' collapse

How can a team anchored by Pujols, Holliday and a Big Three of Waino, Carp and Garcia be flopping? Bernie Miklasz assesses the blame, from the chairman down to the manager.

Earlier, we scrutinized the folks who put this Cards team together. Now it's the players' turn.

Tony LaRussa and Reds manager Dusty Baker talk as they deliver their lineups to umpires before a 2010 game at Busch Stadium. (Photo by Robert Cohen / rcohen@post-dispatch.com)