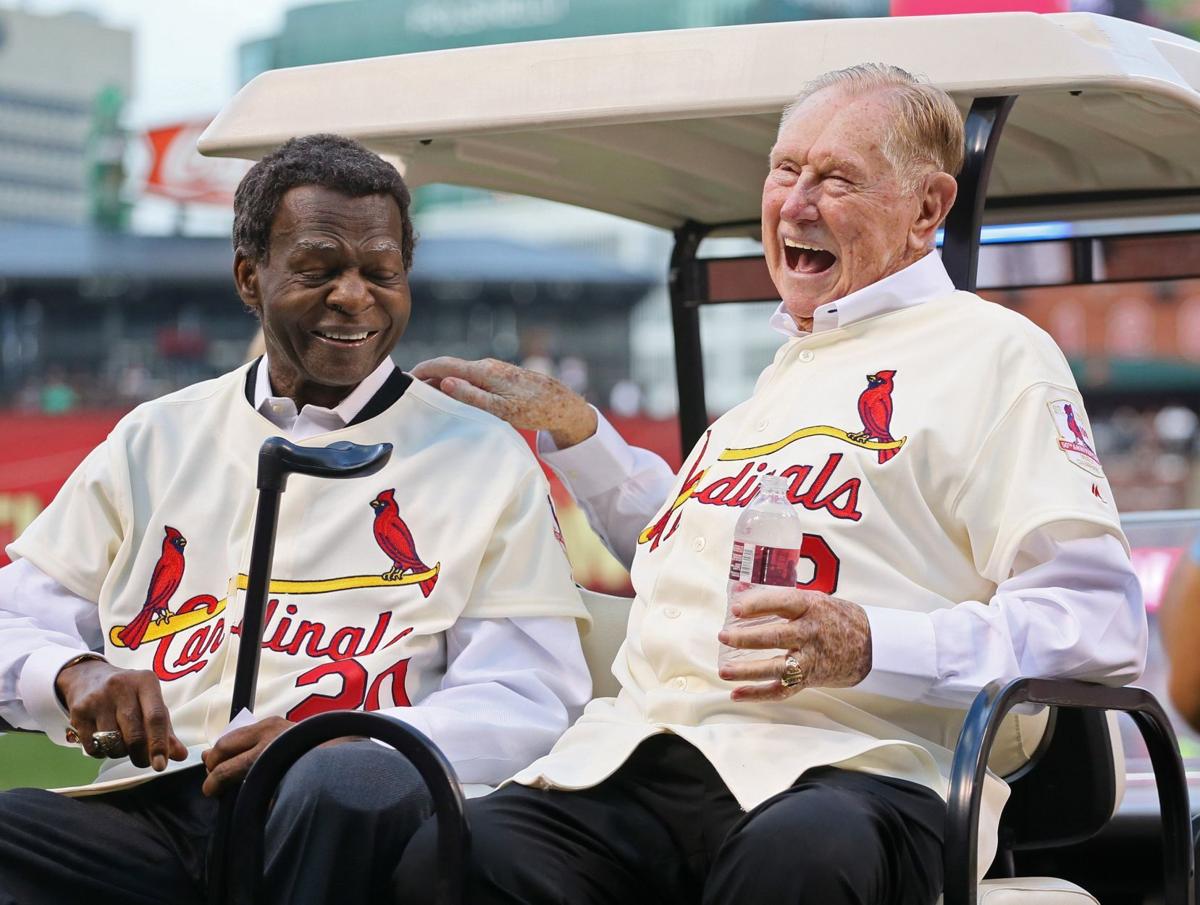 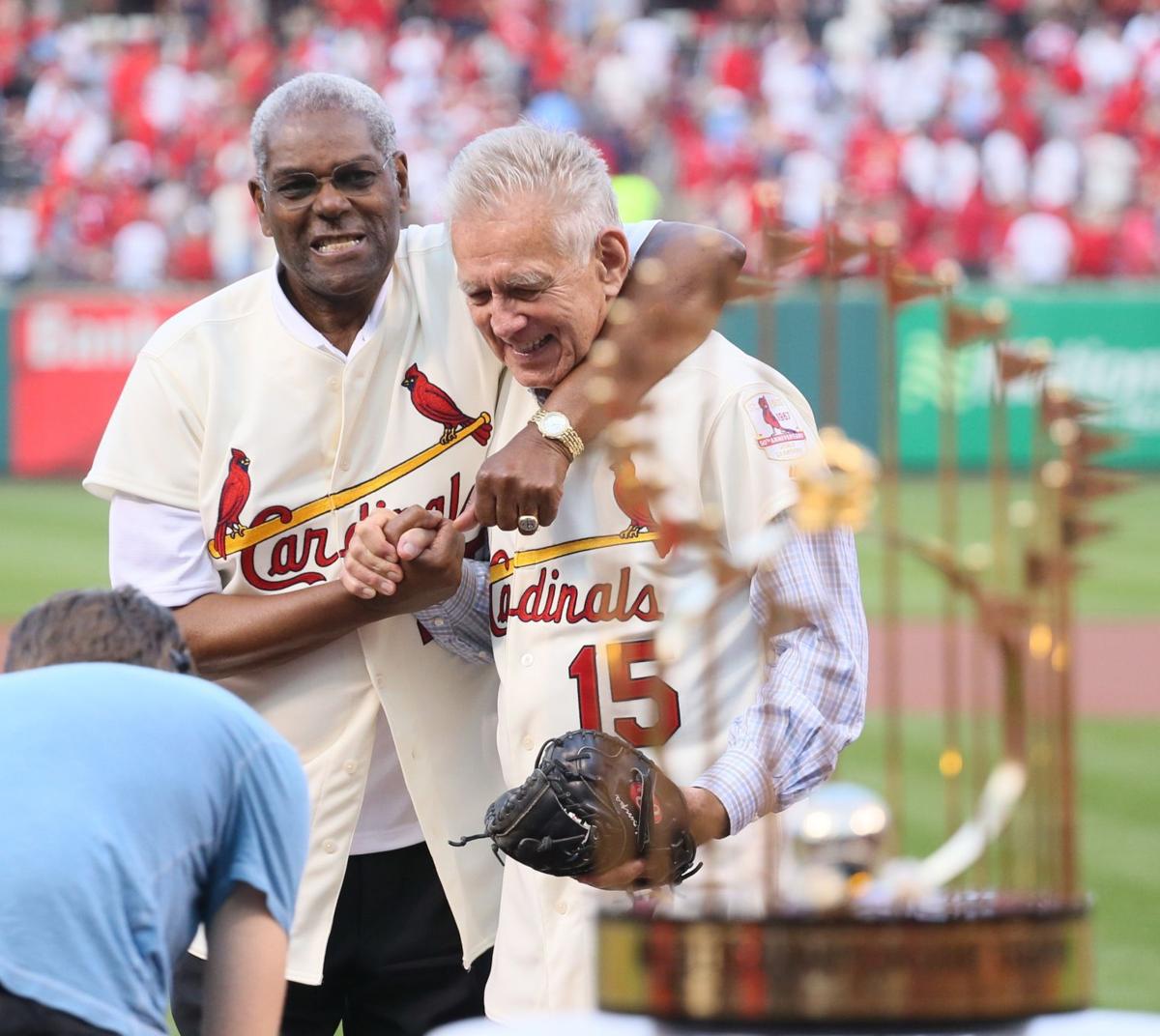 Lou Brock had what they call in the NBA a “triple double” in 1967. The Cardinals Hall of Fame outfielder had 32 doubles, 12 triples and 21 home runs as he helped lead the club to the National League pennant and the World Series title.

Then, of course, there were the stolen bases. Brock, who holds the National League record at 938, had 52 in 70 attempts that year and then tacked on seven more in the World Series against Boston, when he hit .414.

Certainly, he was the catalyst of the championship team that was honored Wednesday night at Busch Stadium, but not just because he stole bases. “The rest of us weren’t that fast,” said catcher Tim McCarver. “But he taught us to be more daring on the bases. Derring-do, if you will.”

As an aid to himself and his teammates, Brock said he used to watch the outfielders throw in pregame practice — when there was pregame infield — and told the other Cardinals that “no outfielder is going to make five out of 10 throws on the base. So, you stretch it. You don’t give the outfielder that credit.”

The 77-year-old Brock, who is battling multiple myeloma less than two years after having a leg amputated, said, “In ’67, I had a brother who passed and I dedicated the season to him. I wanted to do everything perfect.”

Hall of Fame pitcher Bob Gibson said that when Brock came to the big games, “Lou always turned it up a notch. I don’t know how that’s possible, but it happened.

“I think I was one of those, too. I think I pitched harder in the World Series than I did during the regular season.”

Brock said, “I may have played a little bit under the radar but when big games came, somebody had to step up. And it was always me, because I had to raise it above the radar. Gibby was right.”

The ’67 Cardinals had five Hall of Famers, including manager Red Schoendienst, and a couple of others who perhaps should have been in the late Curt Flood and Roger Maris. Thirteen of them were honored before Wednesday night’s game with the Red Sox. They were paraded around the outfield track in convertibles and, in Brock’s case, a golf cart, where he ultimately was joined by the 94-year-old Schoendienst, recovering from a heart procedure.

First baseman Orlando Cepeda, who had come from San Francisco the year before in a trade, said that in the magical 1967 season, “Red Schoendienst made it easy for me. And playing with Bob Gibson, Tim McCarver, Curt Flood, Lou Brock and Roger Maris made it very easy for me.

“Nobody was special. Nobody was better than anybody else. They made me feel wanted right from day one.”

Cepeda was the league Most Valuable Player in 1967 by virtue of his league-leading 111 RBIs and .325 average.

Gibson was just 13-7, but he lost nearly two months to a broken leg when hit by a line drive struck by Pittsburgh Pirates star Roberto Clemente on July 15. Gibson would face three more hitters after that, explaining Wednesday, “I didn’t know my leg was broken. They had sprayed it with that ethyl chloride. It freezes it. You don’t feel it.

“So I thought it’s OK. I’m OK. But then I pitched again and it cracked. It made so much noise. I thought somebody hit me from behind. I thought I’d been shot. (The leg) broke in half. But it was definitely already cracked. They probably would never have X-rayed if it I hadn’t broken it.

“Back in those days, they would tell you to rub some dirt on it, spit on it and ‘go get ’em.’”

When Gibson went down, others stepped up, notably Nelson Briles, who reeled off 10 wins in 11 decisions, including nine in a row.

Dick Hughes also helped fill in, although he already was well on his way to a 16-win season. When Gibson was hurt, Hughes said, “Collectively, we thought, ‘This isn’t good.”

Future Hall of Famer Steve Carlton was 14-9 that year pitching at age 22. Asked what he was thinking when Gibson was hurt that year, he said, “I was a young lefthander. I wasn’t allowed to think. They just put you out there and said, ‘Pitch.’

“They didn’t want you thinking.”

Gibson returned Sept. 7 and prepared for October as the Cardinals were on their way to 101 wins and a 10½-game final margin over second-place San Francisco.

McCarver said, “Gibson was Gibson. There was no way he was going to lose a game in October.

“I hate to use that term, ‘Can’t be denied,’” said McCarver. “But Gibson was tough enough when he didn’t make up his mind that he was going to be the best. When he made his mind that ‘nobody is going to touch me,’ there was nobody touching him.”

As history tells us, Gibson won all three of his starts in the World Series, pitching a complete game in each, allowing a total of three runs. He also hit a home run in Game 7 in Boston off Red Sox ace Jim Lonborg.

“Hanging slider. I was looking for it,” said Gibson. “If I hadn’t, it probably would have killed me. The only way you can hit a slider is to go to it. And I was going to it.”

Later Wednesday afternoon, as he watched a video of the home run on one of the monitors in the Cardinals’ dining room, Gibson said, proudly, “There it goes. Straightaway center. Don’t you ever hang a slider to me.”

The Boston Herald had run a blazing headline the morning of Game 7 that year that read, “Lonborg and Champagne.”

Fiddlesticks, said Gibson, who said he had rephrased it, “Lonborg and Shampoo.”

History also has told us that Post-Dispatch sports editor Bob Broeg, noticing that Gibson and other Cardinals hadn’t been served breakfast in a crowded coffee shop that morning in Quincy, Mass., had hopped off the team bus on the way to Fenway Park to get Gibson an egg sandwich at a deli he knew.

Broeg ultimately gave the sandwich to Butch Yatkeman, the equipment manager, and hoped Gibson would eat it before the game.

For years, Gibson said he had eaten it afterward. He said Wednesday that was not true.

“I threw it away,” he said. “I told people I ate it. I’m not going to eat a cold egg sandwich. It probably was dry. I didn’t know if it had mayonnaise or anything on it.

“But that was nice of him to do that,” said Gibson. “He was concerned.”