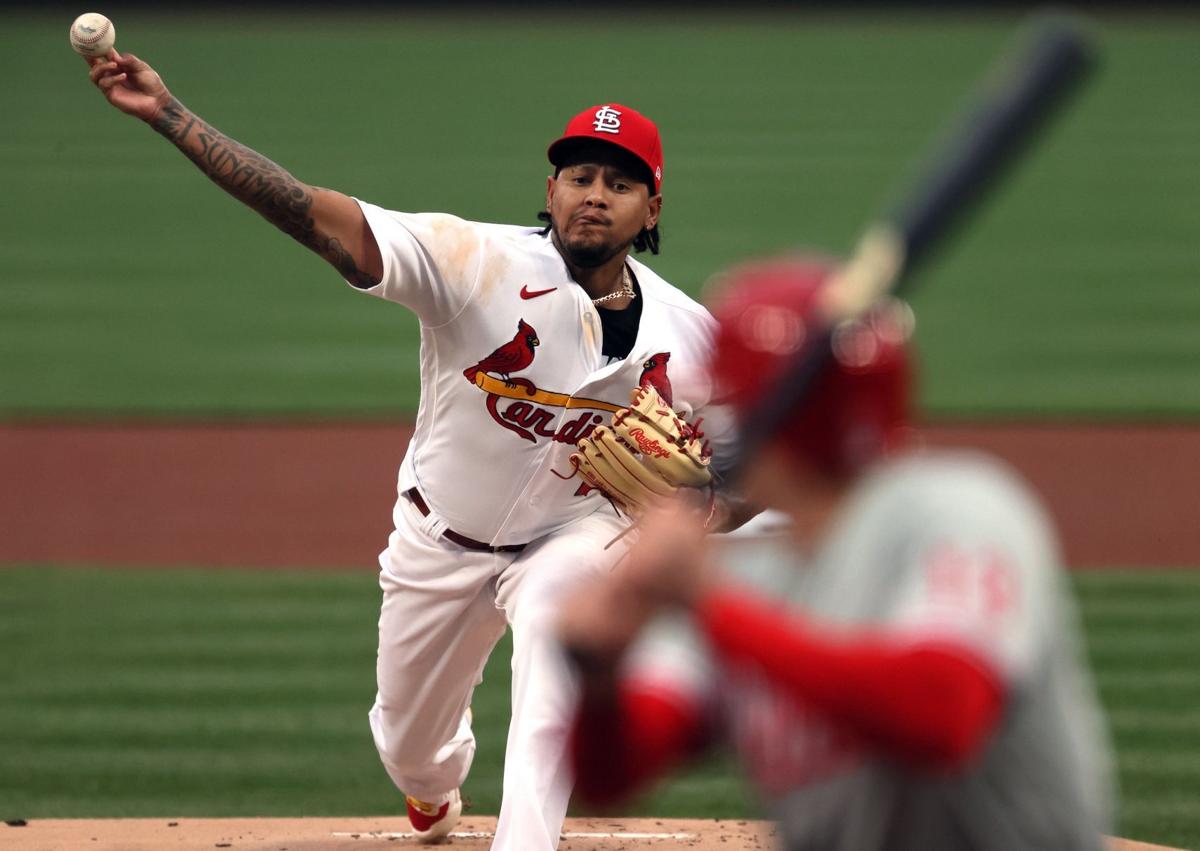 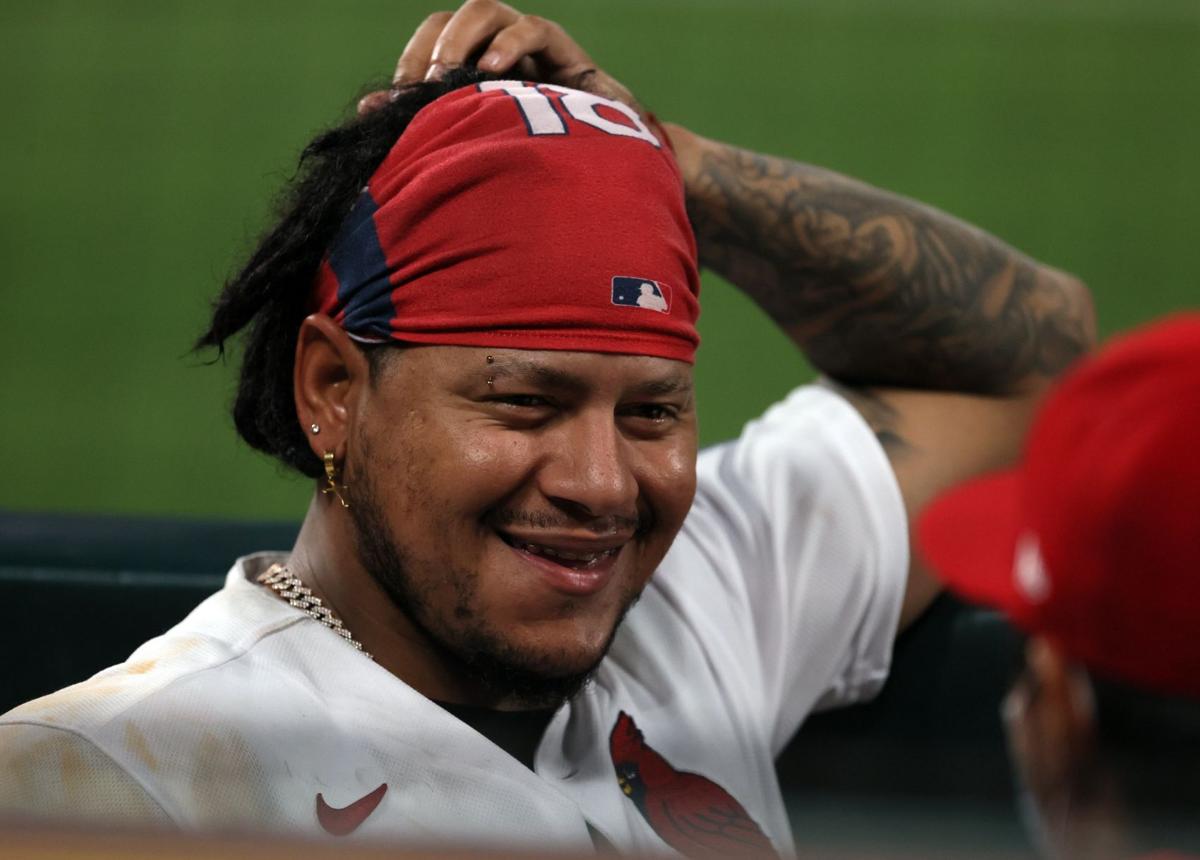 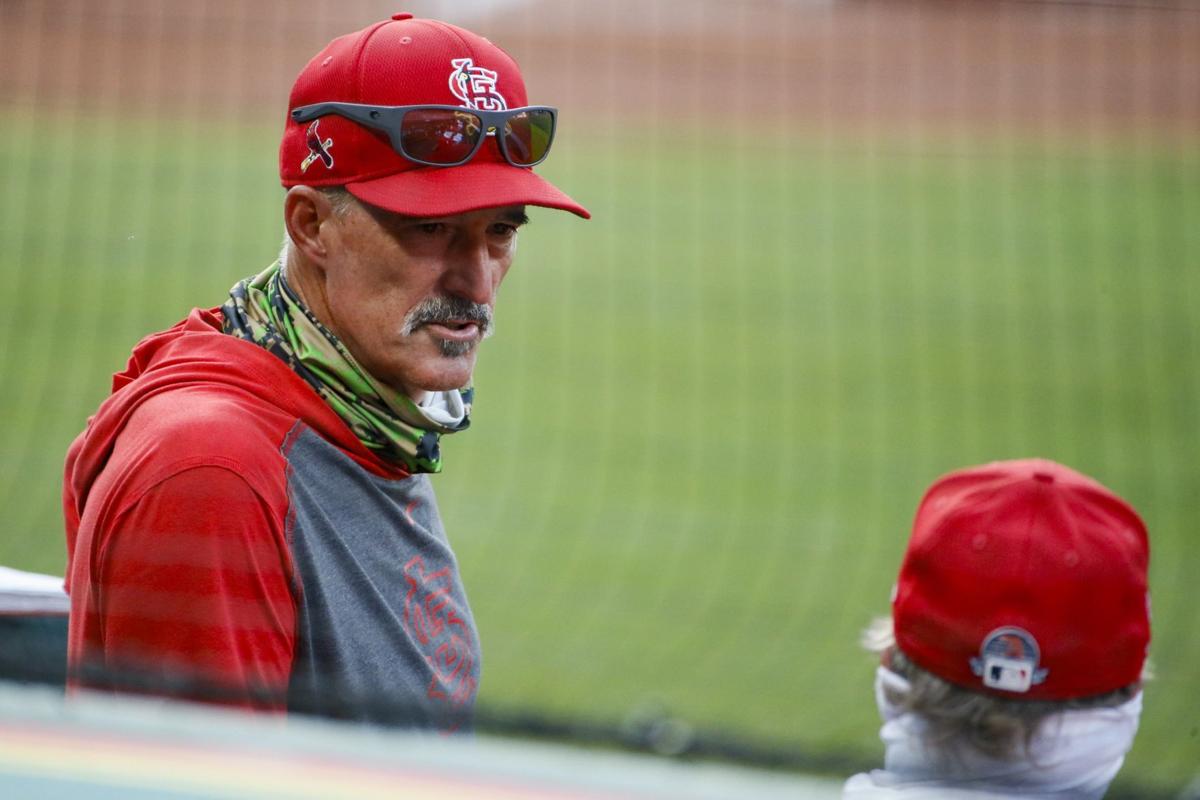 Carlos Martinez, seen facing the Phillies in April, is one of just two long-established pitchers now in the Cardinals' scaled-back pitching rotation.

Injuries have led to Cardinals pitching coach Mike Maddux, left, planning the team's rotation “all in pencil. Let’s put it this way. I need a new eraser."

Remember those days of the Cardinals’ six-man rotation? Well, those days are over. At this point, they’re trying to come up with five starters or even four.

The first time manager Mike Shildt and pitching coach Mike Maddux invoked the six-starter concept was for a 17-game stretch in 17 days that began in late April. The Cardinals went 13-4 during that time, ascending to first place in the National League Central Division.

They tried it again, for another 17-game, 17-day period commencing on May 21. In that span, which ended Sunday, the Cardinals were 6-11 and now find themselves in third place in the division after being off Monday. More importantly, they are without half of the six starters they expected to navigate that entire period, with first, Miles Mikolas (flexor tendon), then Jack Flaherty (torn oblique) then Kwang Hyun Kim (lower back tightness) winding up on the injured list.

Now, as the Cardinals prepare to start a two-game set at home against Cleveland on Tuesday night, the rotation consists of veterans Carlos Martinez and Adam Wainwright, who will pitch the games against the Indians. There then is some uncertainty before John Gant (“our unsung hero,” said Maddux) and Martinez probably start the final two games of a weekend series in Chicago against the Cubs. Then, Wainwright against Miami here and . . . more uncertainty as the Cardinals entertain the Marlins for three games and play four at Atlanta next week.

Maddux has been a pitching coach at the big-league level for 19 consecutive seasons — with Milwaukee, Texas, Washington and the Cardinals — and this likely is one of his most challenging seasons. But he said it did not equate to the 2020 coronavirus-pocked schedule in which the Cardinals had 11 doubleheaders in about a month-and-half and a revolving door of pitchers, changing from one day to the next and, sometimes, from one game to the next.

“Nothing compares to last year,” Maddux said. “That was the biggest challenge I’ve ever had. We had guys pitching that we didn’t know were on the team.

“We’d make between-game moves. You’d say, ‘What’s our matchup here? Well, who’s on the team?’ We ask every day. ‘Who’s available?’ But, we asked then, literally, ‘Who is on the team?’”

This would appear a perfect time for one-time ace Martinez to re-emerge as that No. 1-type pitcher, if he can. Maddux says he has seen signs of that, even with that 10-run allotment in the first inning that Martinez yielded against the Los Angeles Dodgers last week.

“I think Carlos has been throwing the ball pretty darn good,” said Maddux, “notwithstanding his last game. It was one of those you like to wash your hands and write it off, you know?

“Prior to that, he was throwing the ball really well. I think we saw visions of it in Arizona (Martinez’s previous start), when he took a no-hitter into the seventh. And he was pretty good in his starts prior to that. A healthy Carlos is a pretty darned good Carlos.”

Martinez, as occasionally is his wont, had shown some frustration with how things were unraveling in that first inning and the “very feisty” Dodgers, as Maddux referred to them, took advantage. They would call time while at bat or on the bases just as Martinez was about to pitch again.

“There was a lot of gamesmanship going on,” Maddux said.

Off what he saw Saturday, Maddux might have found his fourth starter in hard-throwing Johan Oviedo, who had been the sixth starter in the first configuration of the six-man rotation. After walking six men in 4 1/3 innings in his previous start, the 6-foot-5, 23-year-old threw 49 strikes out of 65 pitches in a good, four-inning start then against Cincinnati.

“We tried to dumb it down a little bit,” Maddux said. “Let’s go back to the grass roots. In our last couple of bullpen sessions, we practiced throwing strikes because his stuff is going to play regardless of who’s hitting.

“You know, ‘Ovie’ came here fast and really hadn’t pitched much (in) Double-A or Triple-A. Often, when these guys get up here, you have an assumption that they have ‘this and that’ in their toolbox. Not quite. We’ve got to hone him at this level. And we’ve got to start with the grass roots, pounding the strike zone.”

“As soon as you realize that your stuff plays, that’s the beginning of a good thing,” Maddux said.

And, though Oviedo has no victories to show for his first 10 big-league starts — five each in 2020 and 2021 — he might be the leadoff pitcher Friday in the Cardinals’ first visit of the season to Wrigley Field.

“We have three (starters). And we need another couple,” Maddux said. “I don’t see why Ovie’ can’t be one of those.”

The situation might not be as dire as it appears. Maddux is optimistic that Kim can come off the injured list after missing just one start and pitch a week from Tuesday, or even that Wednesday against Miami.

“That’s what we’re kind of crossing our fingers for,” said Maddux, citing the off days this week as helpful in smoothing out the bumpy Cardinals’ rotation. “In a perfect world, we can line ‘KK’ up for (Miami).”

In a perfect world, Alex Reyes might be in the rotation now. But he has been far too valuable as a closer, who has 16 saves in 16 opportunities.

“That really hasn’t crossed my mind,” Maddux said. “We’re a better ballclub when he’s out there at the end (of the game) right now. I haven’t entertained it.”

Ordinarily, Maddux maps out the starting pitching schedule for weeks at a time. Now, he has it mapped out “all in pencil,” for only the next 12 days, through the Atlanta series.

“We try to give all the off days we can to these guys. A lot of it depends on ‘KK.’”

Much of the talk about the Cardinals’ pitching is that their hurlers lead the majors by wide margins in walks issued and opponents hit. Maddux isn’t that upset about the latter, even though the Cardinals hit eight Cincinnati batters in four games (no Cardinals were hit by Reds pitchers).

“I don’t mind the hit by pitches,” he said. “That means we’re throwing in(side). The nature of the beast is that sometimes guys are flying across the dish and don’t know how to get out of the way. So some of those hit by pitches are strikes.”

As for the walks, Maddux is disturbed by that total, especially because the Cardinals have one of the best defenses in baseball, if allowed to participate.

“That’s part of our strategy,” he said. “That’s what we tell (the pitchers) every day. ‘Let your stuff play. Let the defense play. They’ve all brought gloves, so let them play.

“Sometimes, hitters earn walks. But non-competitive walks? I don’t care for those,” Maddux said. “I don’t like those at all.”

Maddux said he “absolutely” figured to have Flaherty back before the end of the season.

Mikolas? “We certainly hope so.”

But until then, he will continue to look for sharp pencils and good erasers.

“Nobody feels bad for us,” Maddux said. “We’ve got to march forward. “What we have is what we have.”

Reds score three runs against the Cardinals' bullpen, getting the winning run as a result of an error and dropping the Cardinals back to .500, at 49-49.

Clock’s ticking: Cardinals sink back to .500 as Cleveland romps, 7-2, and trade deadline nears

Cleveland hits four homers (three in one inning) against lefty Kim, sending the Cardinals back home from Ohio at 51-51, still window-shopping for pitching.

With the MLB trade deadline coming down to the wire and NHL free agency underway, which front office leader do you have the most faith in to make the right moves for their teams?

Rookie Woodford returns to the scene of the flex — this time as a starter for the Cardinals with an ongoing audition to remain in the rotation.

Carlos Martinez, seen facing the Phillies in April, is one of just two long-established pitchers now in the Cardinals' scaled-back pitching rotation.

Injuries have led to Cardinals pitching coach Mike Maddux, left, planning the team's rotation “all in pencil. Let’s put it this way. I need a new eraser."