Will Pujols stay or go?
0 comments
Share this
{{featured_button_text}}
1 of 3 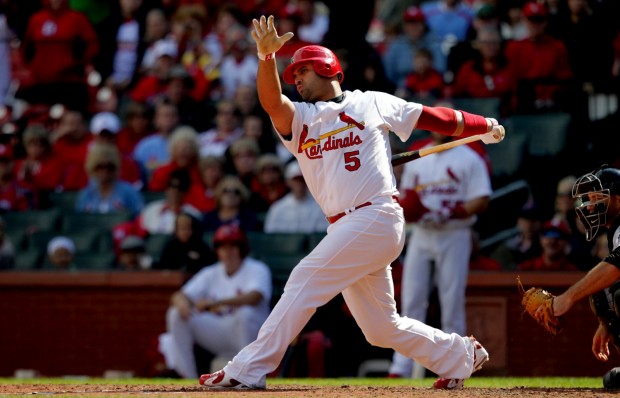 Things seem to be trending in a positive direction right now in terms of re-signing Albert Pujols, but what if he and his agents really want to test free agency? (Laurie Skrivan | lskrivan@post-dispatch.com) 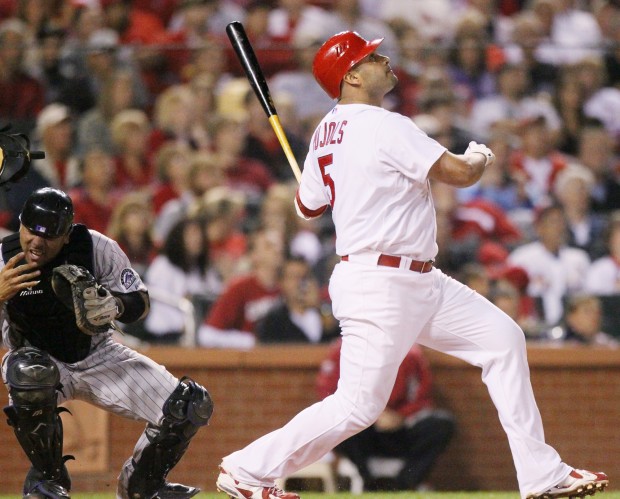 Team Pujols' has said it is done negotiating an extension with the Cardinals when Pujols arrives at spring training. Position players report in 15 days. If he becomes a free agent, will Pujols still wear the Birds on the Bat in 2012? (Chris Lee | clee@post-dispatch.com) 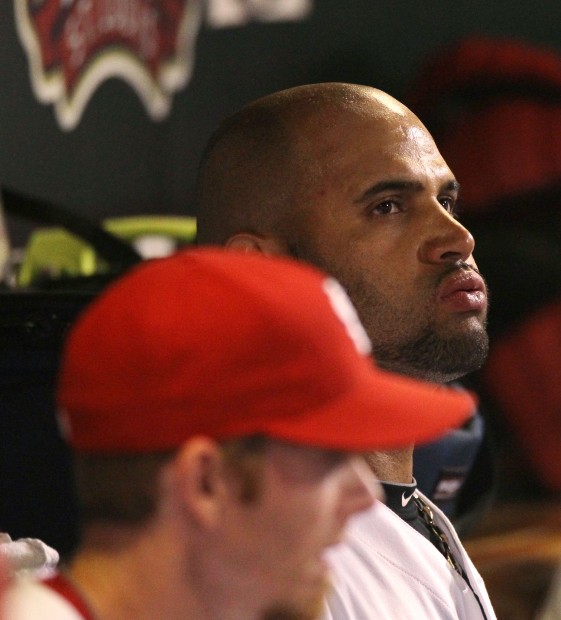 September 28, 2010 -- Cardinals' Albert Pujols in the dugout in the eighth inning during a game between the St. Louis Cardinals and the Pittsburgh Pirates at Busch Stadium in St. Louis, Mo. Chris Lee clee@post-dispatch.com
BY JOE STRAUSS • > 314-340-8371

He will become untradeable — at least without his permission.

After challenging for a fourth National League MVP award this season, Pujols achieves 10 years' major league service time plus five years with his current team. Under terms of the game's Basic Agreement, that means the Cardinals cannot trade Pujols without his consent. Such status becomes especially important as the club weighs when and how to engage its signature player in negotiations about an extension that would make Pujols a Cardinal "for life" before he reaches free agency after next season.

The Cardinals will assume Pujols' $16 million option for 2011 within 10 days after the World Series. In the meantime, the club feels no compulsion to address his future with the club sooner than later.

"We have a number of other issues we need to get to first," Mozeliak said last week. "We certainly plan to engage Albert and his agent in talks at some point. It's something we feel is very important, obviously. But we also have to position ourselves to address our needs for next season."

Pujols repeatedly has said he would factor in the team's competitiveness when establishing his position. After reaching the postseason in four of his first five seasons, Pujols has been there twice in the last five. He has yet to say how the club's regression from 91 wins and a division title may color his stance in upcoming months.

"When the time comes to engage, hopefully every side is prepared. I certainly think preparation is critical."

Both parties held to a virtual gag rule this season regarding Pujols' status. However, that is not to say outside forces have left Pujols in a vacuum.

Signed to a guaranteed seven-year, $100-million extension on the eve of arbitration in February 2004, Pujols has since seen his deal lapped by less-tenured, less-accomplished players, including at least one at his position.

The Philadelphia Phillies signed Ryan Howard in late April to a five-year, $125 million extension that runs through 2016. Howard, the 2007 National League MVP, is currently within a three-year, $54 million deal that pays him 25 percent more ($20 million) than Pujols next season. January's signing of free agent left fielder Matt Holliday to a franchise record seven-year, $120 million deal left Pujols as the club's second highest-paid player a year after he was unanimously voted a second consecutive MVP award.

Pujols declined specific comment shortly after the Howard extension for fear of creating a "distraction" to the season. However, most within the industry assume Howard's $25 million average immediately became a baseline for an extension between Pujols and his current club.

"You can slice and dice it any way you like," said one agent not associated with Team Pujols, "but there is absolutely no way he accepts a deal for a lower AAV (average annual value) than Howard. Start there and go north."

Contract length also represents an obvious hurdle. Pujols, 30, achieved production numbers this season superior to his 2008 MVP season despite a difficult May and a combination of late-season injuries. Mozeliak has remained insistent that the club will base any offer on how it projects Pujols' future production rather than the previous decade. How it finesses talks with a player who won at least three MVP awards within his current deal's seven-year base offers a compelling subplot.

Pujols last week held to a muted stance about his contract, insisting he didn't want to become a distraction to manager Tony La Russa's pending decision whether or not to return for a 16th season with the club.

"I'd just like to leave (any discussion) alone for now," he said.

The collective bargaining agreement between the MLB and the Players Association expires after next season. Though no hints have been dropped that a salary cap may be revisited, negotiations tend to take on their own gravity.

"Albert's going to be in a certain class that is very unique. In terms of having outside factors slow this down or table it, I don't think it's pushing in that direction," Mozeliak said. "I just think when there is time to deal with this I'll obviously be in contact with his agent and we'll try to figure out the next step."

Pujols has not said if he will repeat this year's tack by refusing to negotiate once next season begins. A source familiar with his thinking said Pujols is likely to remain consistent, leaving less than six months to finalize an extension.

Rival agents and teams see an interesting game unfolding. Should Pujols enter next season unsigned, the club faces the dilemma of whether to make Pujols available for trade rather than risk losing him for additional picks in the 2012 draft. And, needing Pujols' consent to any deal, could the club wait until midseason to make him available?

While Pujols seemingly gains leverage each passing month — he leads the league in home runs and RBI after contending for the Triple Crown through August — those familiar with his thinking say he has grown more impatient with the team's slow-play approach.

"We thought it would be best to table it. We tabled it," Mozeliak said. "We haven't revisited it because we're not in the off-season yet. But at some point we'll have a better feel for that as well."

The club sent public signals in 2009 that last off-season represented an "optimal" time to address Pujols' deal. That was before the team immersed itself in a successful pursuit to retain Holliday. During his appearance at the January Cardinals Care Winter Warm-up, Pujols assuaged segments of the fan base and local media by suggesting he would accept a "discount" to remain in St. Louis. However, Pujols never defined the term while asserting he was unafraid of free agency.

This season offered a primer on the risks associated with consolidating a high percentage of payroll in a few elite players. Injuries and overly optimistic projections regarding the minor-league system badly exposed a team that rode its pitching to a quick start and a lead at the July 31 non-waiver trade deadline. Pujols was named the league's Player of the Month in August while the team limped to an 11-15 record for the month that left it seven games off the Cincinnati Reds' division lead.

Not accounting for deferred money, more than 50 percent of this year's payroll is earmarked to Holliday ($17 million), Pujols ($16 million) and starting pitcher Chris Carpenter ($14.5 million). More than $20 million was committed to the remaining veterans within the rotation: Kyle Lohse ($8.875 million), Brad Penny ($7.5 million) and Adam Wainwright ($4.65 million). Those six players accounted for more than 75 percent of the Cardinals' salaries with only Penny's contract set to lapse. The five holdovers are due more than $66.5 million next season.

Should ownership advance payroll to $100 million, $33.5 million is left to cover 80 percent of the roster in addition to players added through in-season moves.

Cards need to pay up for Pujols

Bernie: Pujols has been a relative bargain so far; now is not the time for team to go low.

It's become common to say if the Cardinals cannot sign Pujols to an extension, they have to trade him. Derrick Goold says: Hogwash. Here's why the Cards should keep him, even with free agency looming.

Club wants him back; he wonders if organization would benefit from change after 15 years.

By exercising the $16-million option, Cards set the stage for negotiations on an extension.

Show me the money

DeWitt happy for Reds ... for the most part

Mostly for their owners, but Cards' boss told them he's also eager to get team back on top.

Things seem to be trending in a positive direction right now in terms of re-signing Albert Pujols, but what if he and his agents really want to test free agency? (Laurie Skrivan | lskrivan@post-dispatch.com)

Team Pujols' has said it is done negotiating an extension with the Cardinals when Pujols arrives at spring training. Position players report in 15 days. If he becomes a free agent, will Pujols still wear the Birds on the Bat in 2012? (Chris Lee | clee@post-dispatch.com)

September 28, 2010 -- Cardinals' Albert Pujols in the dugout in the eighth inning during a game between the St. Louis Cardinals and the Pittsburgh Pirates at Busch Stadium in St. Louis, Mo. Chris Lee clee@post-dispatch.com
© Copyright 2021 STLtoday.com, 901 N. 10th St. St. Louis, MO | Terms of Use | Privacy Policy
Powered by BLOX Content Management System from TownNews.com.
You don't have any notifications.