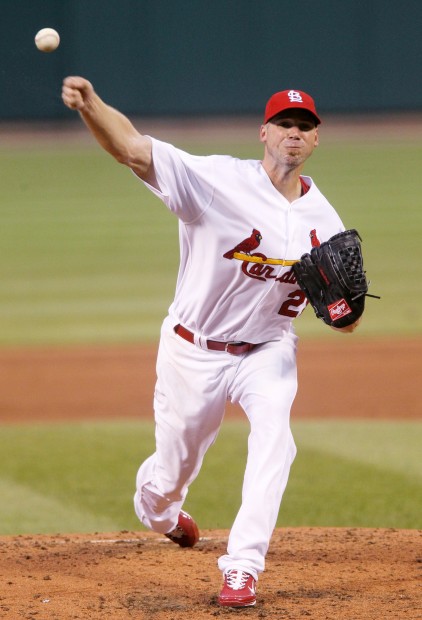 Chris Carpenter leads off for the Cardinals in a three-game series vs. the Reds as Tony La Russa has his aces aligned. (Chris Lee | clee@post-dispatch.com) 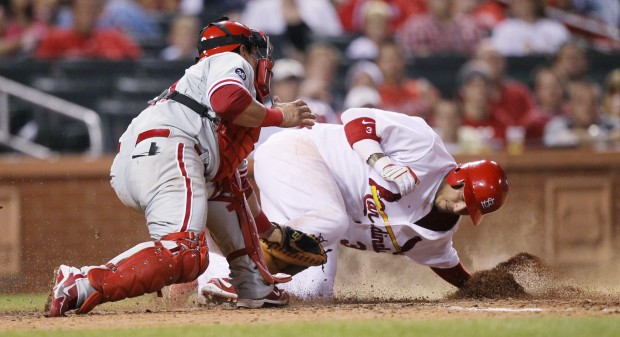 July 20, 2010 -- Cardinals' Felipe Lopez scores ahead of the tag by Philadelphia catcher Carlos Ruiz (left) on a single by Randy Winn in the eighth inning during a game between the St. Louis Cardinals and the Philadelphia Phillies at Busch Stadium in St. Louis, Mo. Chris Lee clee@post-dispatch.com
BY JOE STRAUSS • > 314-340-8371

If they're not healed, they are getting well.

If they aren't whole, they at least no longer waste scoring chances by the gross.

The Cardinals showed Tuesday night that if they spent the season's first half as being dangerous to themselves, they now increasingly are a threat to the rest of the National League. A 7-1 smothering of the Philadelphia Phillies, before 38,712 at Busch Stadium, exposed the two-time defending NL champion as the scuffling team and the Cardinals as one to be feared.

For a second straight start, Chris Carpenter (11-3) exhibited improved command while zooming through five innings in 44 pitches and six innings in 58. And for a second consecutive Carpenter start, the Cardinals took control early and didn't let go as the Phillies' ancient lefthander, Jamie Moyer, left because of a strained elbow after one inning.

The Cardinals ran their season-best win streak to seven games and climbed 12 games above .500 (53-41) for the first time this summer. Justly branded underachievers during a listless first half, this team has taken less time to reach its current position than last year's 91-win model, which didn't reach plus-12 until Aug. 10.

"It can be contagious and it sure seems like it's gotten contagious," offered shortstop Brendan Ryan. "We know in the first half we never played our ‘A' game. We'd like to find out what our ceiling is."

A day after battering the third-place Phillies (48-45) with four home runs, the Redbirds constructed their offense Tuesday with center fielder Randy Winn's two-run homer in the third inning and left fielder Matt Holliday's fifth-inning three-jack against reliever Danys Baez. The Cards have managed a .316 average and 37 runs during a 6-0 home stand. They have replaced a hack-and-slash attack with a more disciplined approach.

"It's always looked like a dominant lineup," said second baseman Aaron Miles, who contributed two hits to raise his average to .341. "Look at the names. Then you couple that with the pitching this team has and even some of the guys who are hurt, it shouldn't be surprising we can roll wins off like this."

The Cardinals have won seven in a row at home and improved to 33-15 there this season. Potentially even more important, what resembled a stop-and-start lineup has achieved rhythm. The win streak is the team's longest since a seven-game tear in July 2006.

"When your pitching has performed like it has, we can run off some wins,'' Holliday said. "If we keep hitting the ball like we've been hitting we should have a pretty good record in the second half."

The manager no longer speaks about inconsistent at-bats up and down the lineup. Rather, he urges a continuation of what he has seen the last week.

"We've got a little confidence going. Now when you start playing better, the No. 1 quality you need is to remain relentless every day. It's really a fine edge," manager Tony La Russa said. "When you get on the right side of that edge you've just got to stay relentless.

"We're playing well; we're playing hard," he said. "I think we're doing the same things we've been doing all year. Balls are starting to fall and we're continuing to pitch well. Our bullpen has done a great job."

"I feel good. I feel like I'm able to keep my timing day to day," Holliday said.

Winn, starting in place of Colby Rasmus, in the eighth inning contributed his third RBI. He has resurrected his standing with an eight-for-16 rush including four extra-base hits and seven RBIs in his last six games.

Third baseman Felipe Lopez managed three hits as every spot in the order hit safely. Carpenter provided a near carbon of his previous start while voicing satisfaction for the first time this season about his delivery.

Carpenter entered Tuesday with a 5.73 ERA in eight career starts against the Phillies. Relying heavily on a sinking fastball, he needed only 90 pitches to work eight innings five days after using 101 pitches to clear eight innings against the Los Angeles Dodgers. He has surrendered nine hits and one walk in his last two starts. His mechanics in check, Carpenter no longer answers to suggestions that he is pitching hurt.

"My delivery was better tonight," Carpenter said. "I'm going to continue working on it between starts and try to get better again."

La Russa said, "Even when he's not in his groove it's real good. But he's getting sharper. He made a lot of good pitches against a good lineup."

The Phillies, in contrast, went through six pitchers while managing only isolated threats against Carpenter. Defensive hijinks in the third inning helped create a first-and-third situation with one out before Carpenter induced a double play.

The Phillies didn't break through until trailing 6-0. That's when right fielder Jayson Werth and center fielder Shane Victorino had back-to-back doubles to spoil Carpenter's run at his first shutout this season.

The Cardinals managed at least one baserunner in every inning and at least two in six innings. They increased their lead to 3-0 following catcher Yadier Molina's double to lead off the fourth inning. A wild pitch scored him.

With Lou Piniella giving up, Cards manager has outlasted another NL Central rival. Already there are rumors about the Cubs pursuing La Russa.

Freese could be out an extra 2-3 weeks

But third baseman voices optimism he still could go on rehab assignment some time next week.

Chris Carpenter leads off for the Cardinals in a three-game series vs. the Reds as Tony La Russa has his aces aligned. (Chris Lee | clee@post-dispatch.com)

July 20, 2010 -- Cardinals' Felipe Lopez scores ahead of the tag by Philadelphia catcher Carlos Ruiz (left) on a single by Randy Winn in the eighth inning during a game between the St. Louis Cardinals and the Philadelphia Phillies at Busch Stadium in St. Louis, Mo. Chris Lee clee@post-dispatch.com
© Copyright 2021 STLtoday.com, 901 N. 10th St. St. Louis, MO | Terms of Use | Privacy Policy
Powered by BLOX Content Management System from TownNews.com.
You don't have any notifications.