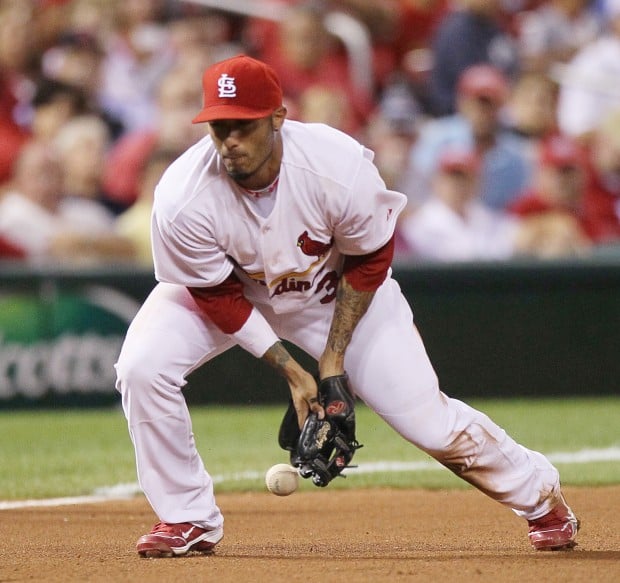 Felipe Lopez likely has been overexposed at third base this season. The Cardinals aren't hiding their desire to acquire a regular third basemen. (Chris Lee | clee@post-dispatch.com) 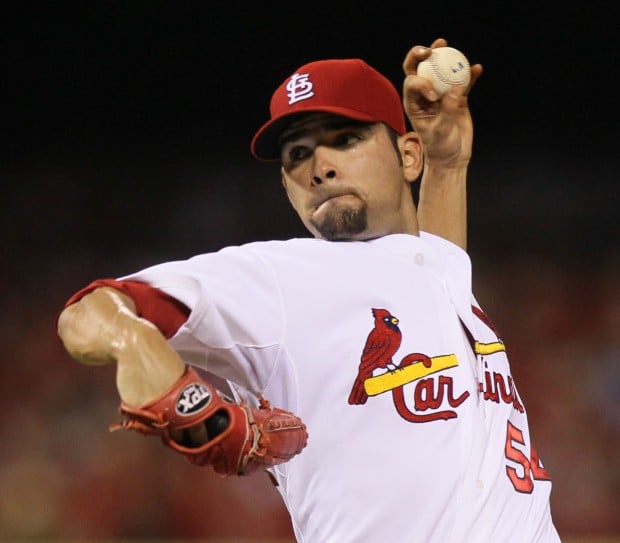 Jaime Garcia's went 13-8 with a 2.70 ERA as a rookie. Will he face a sophomore slump this year, or just continue to get better? (Chris Lee | clee@post-dispatch.com) 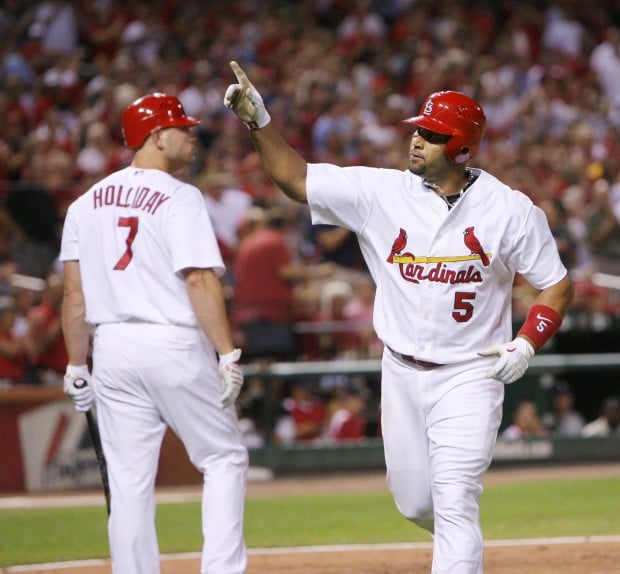 August 17, 2010 -- Cardinals' Albert Pujols celebrates as he returns to the dugout after hitting a solo home run in the fourth inning during a game between the St. Louis Cardinals and the Milwukee Brewers at Busch Stadium in St. Louis, Mo. At left is on-deck hitter Matt Holliday. Chris Lee clee@post-dispatch.com
BY JOE STRAUSS • > 314-340-8371

Tuesday night at Busch Stadium the Cardinals made him resemble a Cy Young Award contender.

Even so, the Cardinals might still have stolen a low-scoring decision from the Milwaukee Brewers. Instead, an early defensive gaffe from an increasingly vulnerable position allowed the Brewers to reach lefthander Jaime Garcia (10-6) for three unearned runs in what became a 3-2 Brewers win before 45,380 at Busch Stadium.

The loss dropped the Cardinals two games behind the NL Central-leading Cincinnati Reds, leaving the Redbirds in the same position they were in before sweeping a three-game series from the Reds last week.

Lopez, however, absorbed the responsibility. "If I make those plays, we win," he said.

Third-inning damage became unavoidable after Lopez fumbled Ryan Braun's smash with runners at first and second and none out. Trying to hurry to third base to force the lead runner, Lopez instead had the ball pinball between his feet to load the bases.

One run scored on a subsequent

Unearned runs against Garcia are nothing new. Of his 51 runs allowed, 13 have been unearned. Teammates Chris Carpenter and Adam Wainwright have allowed nine unearned runs total. Garcia lowered his ERA to 2.58, sixth-best in the National League.

Sluggish pace and loss of focus are often attached to a pitcher's susceptibility to unearned runs. Manager Tony La Russa disputed both in Garcia's case.

"I think the guys enjoy playing behind him. He works quickly. I don't think he's even begun to make excuses or show anybody up out there," La Russa said.

Lopez neither played down nor rationalized his mistakes. "It's baseball," he said. "That's all."

Bush (6-10) exhibited radically different form from his previous three starts, when he allowed 25 hits and 31 baserunners in 161/3 innings. The Cardinals pushed just two runners to second base against him - one on Brewers shortstop Alcides Escobar's third-inning throwing error and the second on first baseman Albert Pujols' 31st home run. A blister on his index finger, not the Cardinals, chased Bush.

"He was commanding his fastball," said second baseman Skip Schumaker, who had one of the Cardinals' six hits against Bush and two relievers. "There were some guys who had numbers against him. Maybe at times we were overaggressive. But having said that, he was around the zone with all his pitches. You've got to give all the credit to him and none at all to our side."

"He was ahead on everybody. He was pretty much getting us to swing at his pitch," said shortstop Brendan Ryan. "It's pretty much frustrating, but it's what he gets paid to do, too."

"When you get beat by three you always think you can get four if you have any confidence in your offense," La Russa said. "Without taking anything away from Bush and the relievers, there are ways to get four runs. You're disappointed you don't."

Much of the Cardinals' positive news on offense centered on Pujols. His 397th career home run moved him past Joe Carter into sole possession of 50th place all-time. Pujols has homered in eight of his team's last 14 games.

The Cardinals didn't manage more than one baserunner at a time until Schumaker's single brought the go-ahead run to the plate in the eighth inning.

Garcia worked aggressively. After allowing 12 runs (eight earned) in 101/3 innings covering his last two starts, Garcia consistently challenged a dangerous lineup. "It's basically about going after hitters. Pitching to contact is when you get strikeouts instead of being too fine and trying to get strikeouts," Garcia said. "That's the guy I was at the beginning (of the season)."

The third-inning rally left Garcia slapping at his glove. But rather than implode after McGehee's blast, Garcia collected himself and kept the game in order. Garcia allowed five hits and three walks while striking out six, including five in the first two innings.

"It's part of the game. Stuff like that is going to happen," Garcia said. "You're always having things going on. If the umpire misses a pitch, whatever happens behind you, you've got to keep your mentality the same."

The Cardinals made the score 3-2 in the eighth when reliever John Axford bounced a wild pitch, allowing Ryan to come home.

With Schumaker on second, Axford escaped by striking out center fielder Jon Jay, intentionally walking Pujols and getting left fielder Matt Holliday to ground out.

The Cardinals turned a brilliant double play in the seventh inning when Ryan extended for right fielder Corey Hart's smash near second base, flipped the ball to Schumaker with his glove, then watched Schumaker whirl to complete the turn. An appreciate crowd offered a lengthy standing ovation.

He'll get playing time at third base in Memphis as Cards continue search for help at the position.

Brewers make themselves at home

Their 3-2 win over the Cardinals on Tuesday night gave them a 23-19 mark at new Busch.

Felipe Lopez likely has been overexposed at third base this season. The Cardinals aren't hiding their desire to acquire a regular third basemen. (Chris Lee | clee@post-dispatch.com)

Jaime Garcia's went 13-8 with a 2.70 ERA as a rookie. Will he face a sophomore slump this year, or just continue to get better? (Chris Lee | clee@post-dispatch.com)

August 17, 2010 -- Cardinals' Albert Pujols celebrates as he returns to the dugout after hitting a solo home run in the fourth inning during a game between the St. Louis Cardinals and the Milwukee Brewers at Busch Stadium in St. Louis, Mo. At left is on-deck hitter Matt Holliday. Chris Lee clee@post-dispatch.com
© Copyright 2021 STLtoday.com, 901 N. 10th St. St. Louis, MO | Terms of Use | Privacy Policy
Powered by BLOX Content Management System from TownNews.com.
You don't have any notifications.