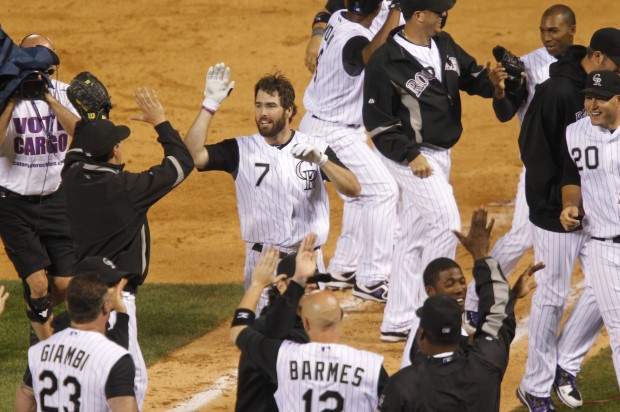 July 6, 2010 - Colorado Rockies' Seth Smith, center, is congratulated by teammates after he hit a three-run, walkoff home run against the St. Louis Cardinals in the ninth inning of the Rockies' 12-9 victory. Photo by David Zalubowski | Associated Press 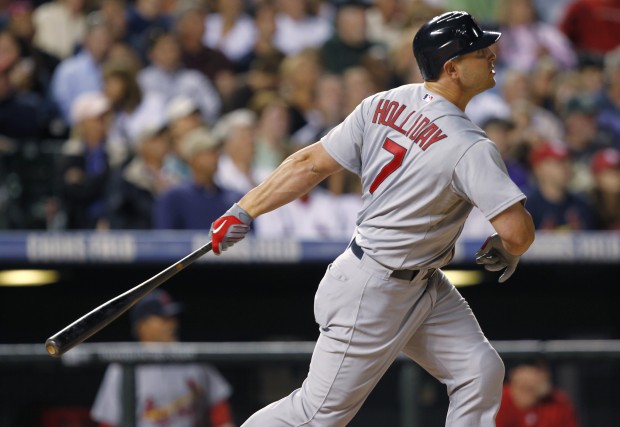 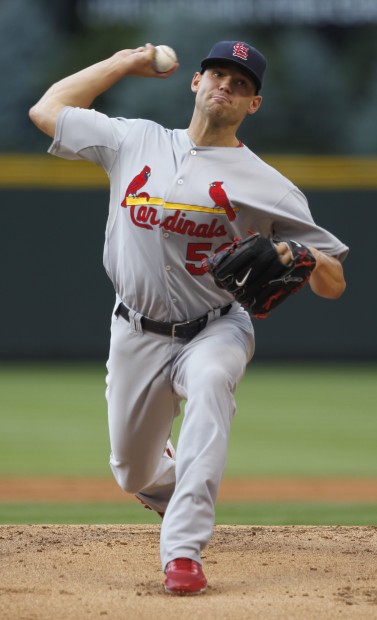 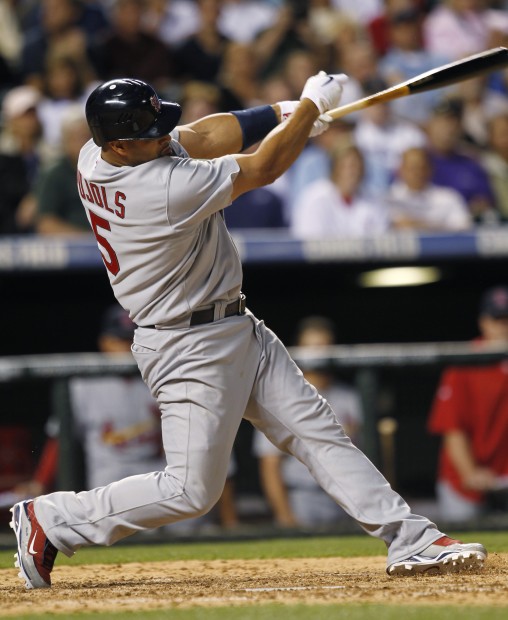 July 6, 2010 - St. Louis Cardinals' Albert Pujols follows through on a single against the Colorado Rockies to lead off the fifth inning. Photo by David Zalubowski | Associated Press 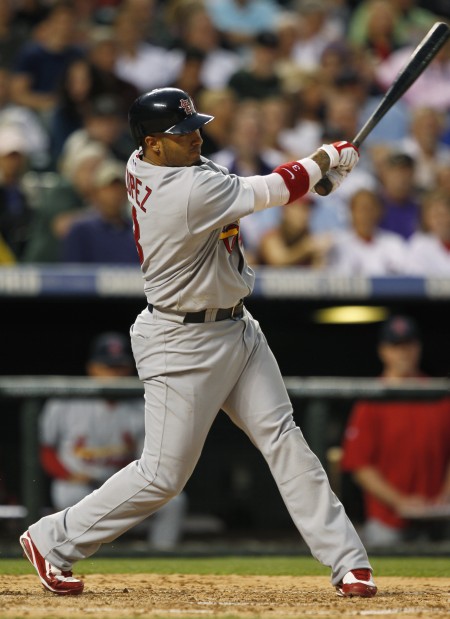 July 6, 2010 - St. Louis Cardinals' Felipe Lopez follows the flight of his RBI-single against the Colorado Rockies in the fourth inning. Photo by David Zalubowski | Associated Press 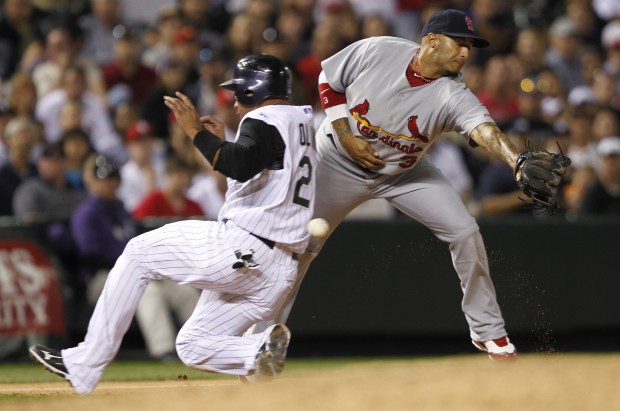 DENVER • Several hours after Brad Penny took a step back from his return, the pitcher who has taken his place in the rotation made a stride forward in his career.

Then a colossal collapse by the bullpen botched it.

The Colorado Rockies kept testing starter Blake Hawksworth with no luck through five innings before finally busting through in the ninth against closer Ryan Franklin. The Rockies scored nine runs and had eight of their season-high 19 hits in the final inning to steal a 12-9 stunner Tuesday at Coors Field. The nine-run inning was the Rockies' largest of the season, and six of the runs came off Franklin (3-1).

The Cardinals' closer allowed two three-run homers in the inning, including the walk-off homer by Seth Smith. The Rockies' right fielder clubbed a shot deep over the scoreboard in right field to snap a 9-9 tie and deliver Colorado the improbable win.

"We played our butts off for nine innings and then I come in and didn't get the last out," Franklin said after his first loss of the season. "I just didn't get it done. I feel bad for everybody in here who fought so hard for three hours."

The Rockies tied the game when right fielder Randy Winn mishandled a ball in right field, committing his first error in 253 games and allowing Carlos Gonzalez to score on Jason Giambi's single. Catcher Miguel Olivo scored two runs in the inning and the Rockies sent 11 batters to the plate. Five of the Rockies' runs in that inning came with two outs.

It was the first time in 38 games this season that Cardinals lost after leading through seven innings.

"There is no way you cannot get three outs with a six-run lead," manager Tony La Russa said. "There's no way to explain it, no excuses you make. It's just a really difficult loss. It's just brutal."

The disastrous ninth inning spoiled an evening for the Cardinals that was otherwise remarkable for their ability to deflect the Rockies' scoring threats.

Hawksworth was especially deft at it.

The righthander continued to exploit the first extended look he has had as a starter in the major leagues. Hawksworth ducked, dodged, evaded and otherwise shimmied free of trouble throughout his five innings of work - and though it took him a maximum amount of pitches, he did it with minimal damage from the Rockies.

Felipe Lopez backed Hawksworth with three two-out RBIs in the first four innings of the game, connecting against Jeff Francis for a two-run homer in the third and an RBI single in the fourth. In the sixth inning, Matt Holliday hit his first home run in 12 games, crushing a blast deep into the left-field seats for a three-run shot. That gave five Cardinals relievers ample cushion to preserve what would have been a second consecutive win for Hawksworth.

Or so it seemed.

Chris Ianetta's three-run shot off Franklin was the opening volley in a ninth-inning debacle for the Cardinals' bullpen. Dennys Reyes started the inning with a six-run lead and retired only one of the four batters he faced. Ianetta slashed the Cardinals' lead to two runs with one out in the ninth.

The Cardinals flirted with such danger all game. It caught them when it seemed least likely.

Add that worse ending to a day that started bad.

Some of the Cardinals arrived at the clubhouse Tuesday to see Penny leaving it. The righthander, out with a strained back muscle, cut his planned simulated game short and headed back to St. Louis to have the renewed discomfort around his shoulder and right arm re-evaluated.

The Cardinals chose Hawksworth, who has filled in for Penny, over veteran Jeff Suppan for the opener of this three-game series against the Rockies. Their reasoning was Hawksworth had "deserved" to stay on normal rest and, if he pitched well, score another start before the break arrived. Even if Penny had returned has scheduled, the Cardinals were down an arm in the rotation with Kyle Lohse on the disabled list.

"In all fairness to Hawksworth, he deserves the chance to (start)," said pitching coach Dave Duncan before the game. "We know what Soup can do. We need to see what Hawk can do."

Hawksworth held the Rockies to two runs on eight hits and four walks. From the second inning to his fifth and final inning, Colorado left 10 runners on base. Hawksworth had to duck out of two bases-loaded jams in the first three innings he pitched at Coors Field. He leaned heavily on his changeup and the lower third of the Rockies' lineup to escape trouble.

Twice he got the Rockies' pitcher to ground out with at least two runners on base to end an inning, and he got Clint Barmes to spike a 94-mph sinker into the ground for an inning-ending groundout that left the bases loaded.

The Cardinals built a seven-run lead by the time Hawksworth left the game, having thrown a career-high 97 pitches. Lopez was the early engine. In the fifth inning, Yadier Molina stroked an RBI single that scored Albert Pujols. In the sixth inning, reliever Jhoulys Chacin walked Pujols to bring up Holliday.

The Cardinals' left fielder was making his second trip as a visitor to Coors Field, the ballpark he called home for the first five seasons of his career. Holliday brought a .357 average at Coors into Tuesday's game. He ripped a 1-1 pitch from Chacin for his 12th homer of the season and his 85th homer in 362 games at the downtown Denver ballpark. It was his first home run as a visitor.

Those were the last runs the Cardinals scored.

Nine ways to look at the disastrous 9th

Derrick Goold writes: The Cardinals' collapse in the 9th inning of a 12-9 loss to the Rockies was historic, ugly and, perhaps, absolutely avoidable.

Strange games, strange team, strange activities. Something is always malfunctioning with the Cards.

With a lead early in the game, should a manager go to the relievers or preserve the bullpen by leaning on a long man?

Your Turn: Fans rant about collapse

How the Cards blew a six-run lead in ninth

Penny told team officials that he felt a tightness in his triceps, near where he had upper back muscle strain.

Baseball writer reveals that "questions are being asked internally about team chemistry."

July 6, 2010 - Colorado Rockies' Seth Smith, center, is congratulated by teammates after he hit a three-run, walkoff home run against the St. Louis Cardinals in the ninth inning of the Rockies' 12-9 victory. Photo by David Zalubowski | Associated Press

July 6, 2010 - St. Louis Cardinals' Albert Pujols follows through on a single against the Colorado Rockies to lead off the fifth inning. Photo by David Zalubowski | Associated Press

July 6, 2010 - St. Louis Cardinals' Felipe Lopez follows the flight of his RBI-single against the Colorado Rockies in the fourth inning. Photo by David Zalubowski | Associated Press