Do Cards owe city in ballpark deal?
0 comments
Share this
{{featured_button_text}}
1 of 7 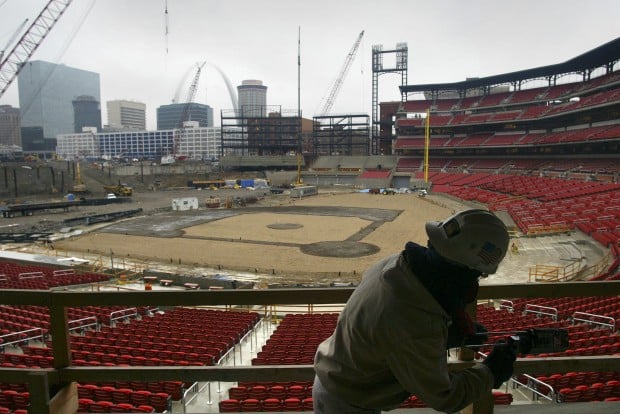 Jan. 10, 2005-- Lee Rowe, a carpenter with J.P. Henry Contractors, installs seats on the Field Suite Level of Busch Stadium as he works above the newly-developing infield Friday. (P-D file photo) 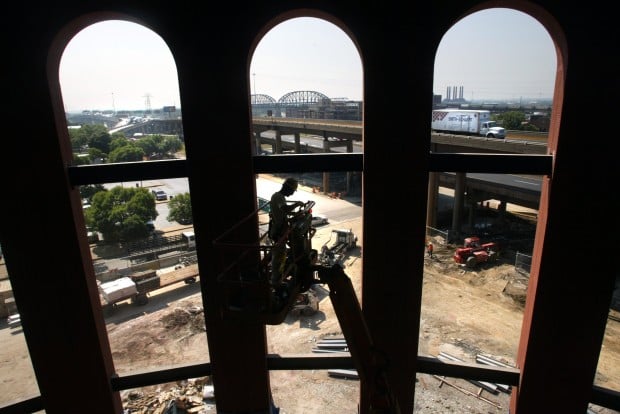 July 20, 2005--Painter Keith Throop uses a lift to touch up the primer on the beams supporting the Spruce St. entrance adjacent to Highway 40, as the new Busch Stadium takes shape. (P-D file photo) 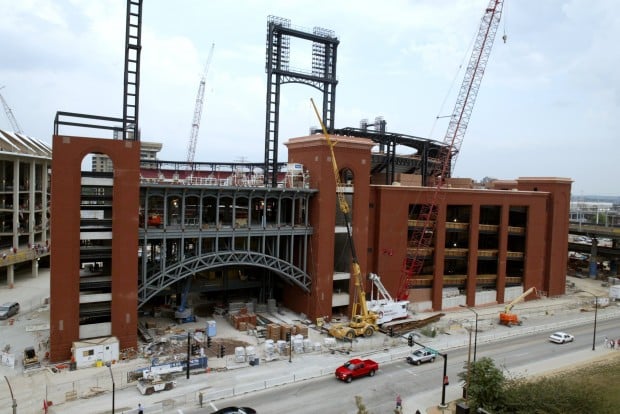 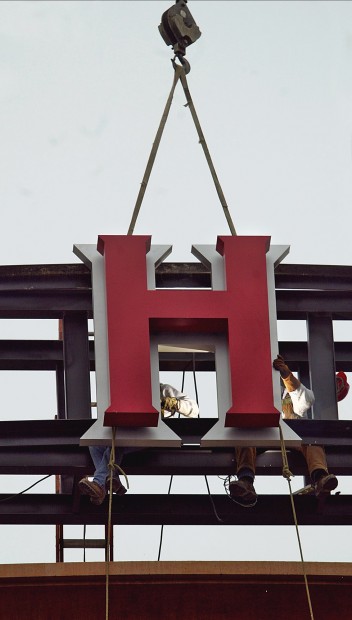 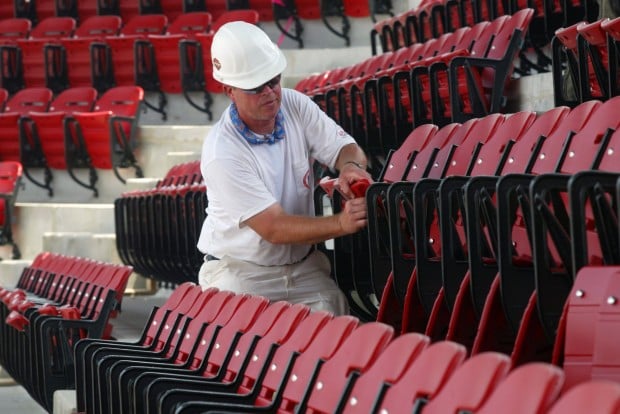 July 19, 2005--Jim Amerman of J.P Henry Co. installs seats in basic Cardinal red along the upper deck on the first-base side of the stadium. (P-D file photo) 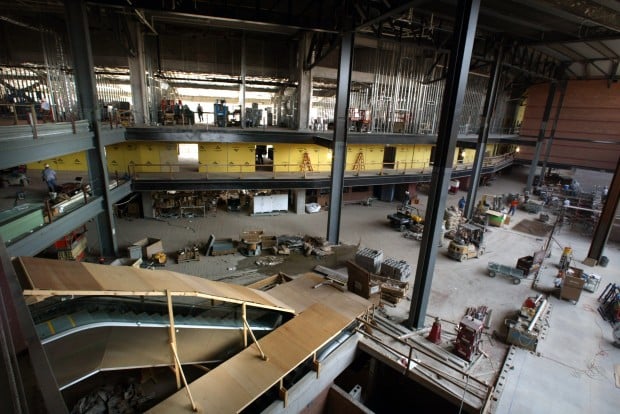 ST. LOUIS • Eight years ago, as the St. Louis Cardinals aimed to build a new baseball stadium, team owners signed an agreement with the city worth millions of dollars a year in tax breaks.

The Cardinals also agreed to give the city a cut of profits made if any portion of the team was sold.

Then, last year, owners sold a sizeable chunk of the Cardinals — more than 13 percent. Now, a group of anti-public-stadium advocates is alleging that the team owes the city hundreds of thousands of dollars.

And, despite another multimillion-dollar budget gap anticipated for the coming year, the city isn't checking into it. City officials acknowledge that they have never really kept tabs on the agreement.

"Here they are moaning and groaning that they don't have enough money to pay firemen," said Fred Lindecke, a volunteer with the Coalition Against Public Funding for Stadiums. "Here's an opportunity to explore the possibility that they may have some extra money coming in, and they won't do it. That's just amazing to me!"

The Cardinals insist that they have done everything they were supposed to.

"There's nothing owed the city," said Mike Whittle, general counsel for the Cardinals.

"It's been an unbelievable deal for the city, by any measure," said team President Bill DeWitt III, citing an annual bump in tax revenue.

Several city officials, including Barb Geisman, the former deputy mayor for development, said there was no reason to double-check. They trust the Cardinals.

But critics say that trust might mean that the city has left several hundred thousand dollars on the table.

In 2002, Cardinals owners were working to secure financing of their new stadium.

City aldermen had given the team tax breaks for the new Busch Stadium, including the complete abatement of ticket taxes and 25 years of real estate tax relief.

But the city wanted to make sure the Cardinals wouldn't take the money, build a new stadium and then sell the team for a premium. Or, worse, move somewhere else.

So city leaders surveyed similar deals across the country and wrote the current "Operations and Non-relocation Agreement."

It included a profit-sharing clause.

The contract set the value of the Cardinals at $180 million, plus or minus owner investments or dividends after 2002. Owners who sold at prices above their share of that value would have to pay the city no more than 8 percent, depending on the profit and the year. (The percentage dipped every year after 2005.)

So, for example, if owners had sold the entire team in 2006, and got $429 million — the reported worth of the Cardinals then — they would have owed the city about $13 million.

But even smaller sales could provide a shot of cash to the troubled city budget.

Until last year, no major sales were reported.

The new stadium opened in April 2006.

Since then, the Cardinals have saved about $706,000 a year through city real estate tax abatements on the stadium, as well as at least $5 million a year in ticket tax waivers. That's $28.5 million that the city has forgone since 2006.

Over 25 years — roughly the length of the abatements — the Cardinals will save at least $143 million on payments to the city. In addition, the team got $54 million in state incentives and a $45 million county loan.

Cardinals officials said the deal has been great for the city. The team is paying about $11 million a year in city taxes — about $2 million more than in 2001.

Moreover, said Rodney Crim, executive director of the St. Louis Development Corp., the team has adhered to the contract's profit-sharing clause as well as its other requirements.

The team's 2002 agreement with the city did not require proof that the team was giving away 100,000 tickets a year, or making 486,000 inexpensive seats available to the public, or giving $100,000 to city recreation programs.

Crim and other city officials said they never asked the Cardinals for documentation, until the Post-Dispatch called recently.

The team had, according to its data, lived up to its word.

But what about the profit-sharing clause? The Cardinals eventually began sending affidavits stating how much of the team had been sold each year, as required by the agreement — though not until Lindecke's group complained to the city comptroller.

The first affidavit came in October 2007, about a year and a half after the stadium opened.

It showed that Cardinals Chairman Bill DeWitt Jr. had sold some of his shares in 2005. The shares totaled less than 1 percent of SLC Holdings, which owned the company that owned the franchise. The Cardinals reported another sale by DeWitt the next year, again of less than 1 percent, and a sale the year after for just under 3 percent.

Then, this January, the Cardinals reported two larger sales of SLC Holdings. The first was 10 percent to Dogwood Investments Inc., a Maryland corporation formed by Randall D. Sones, general counsel for the Allegis Group, which bills itself as the "largest privately held staffing company in the United States" and has offices in Germany, India and the Netherlands.

The second was 3 percent to Stapleton Baseball Partners LLC, and principal Craig R. Stapleton, a Kansas City-born businessman who has sat on numerous company boards, owned the Texas Rangers with President George W. Bush, and served as U.S. ambassador to the Czech Republic and France.

The Cardinals didn't list who sold the shares, as the contract requires. But the team noted, as in the past, that "there were no Ballpark-Related profits … arising from such transfer."

Whittle, the Cardinals' attorney, said the 2009 sales prices didn't exceed their 2002 value. A small chunk of ownership isn't worth that of a majority share, he said. "Just because there are profits doesn't mean there are distributions," he said.

"That's true with every company."

Indeed, it isn't unusual for corporations to trade for what's called "book value," or the value on the balance sheet, instead of market rates, said Mike Alderson, a finance professor at St. Louis University.

Lindecke can't see how any of that makes sense. Surely, with a new ballpark, steady attendance and regular increases in ticket prices, the Cardinals franchise has increased in value. And, if so, why would any owner sell his shares for less than they're worth?

"They were so desperate for money, they were willing to sell their ownership percentage for nothing more than the team was worth in 2002?" he asked. "That contradicts all logic. Even someone who's having their home foreclosed tries to get as much as he can."

So, this summer, Lindecke sent a letter to City Attorney Patricia Hageman and Comptroller Darlene Green. "I urge you to investigate this for the purpose of learning whether the City of St. Louis is entitled to revenue it badly needs," he told them.

Neither Hageman nor Green replied, he said. Nor did they respond to the Post-Dispatch.

The cash payout to the city wouldn't have been huge, either way. Even if the value had nearly tripled, and the owners had sold the 13 percent for $63 million, the sellers would have owed the city $1.3 million, or less than half of a percent of the city's $450 million general fund budget.

Still, for Lindecke, the issue is bigger than a baseball team. If the city isn't keeping tabs on this agreement, how about all the others?

What about the $50 million in downtown development promised by Lumière Place? Or the space-sharing agreements at the new Peabody Opera House?

And what about the $35,000 a year just promised by north St. Louis casino developers, meant to rehab the Mississippi River trail?

If the city's not watching the Cardinals, asked Lindecke, then who is?

The dealing and wheeling is under way

Now that the Cardinals have signed Ryan Theriot as a shortstop, beleaguered Brendan Ryan goes on the market. Ask Joe Strauss about the deal, w…

Washington U. is site as group considers effect of saturation on the ordinary fan.

Midyear cuts are likely, including $2 million from the police department.

Jan. 10, 2005-- Lee Rowe, a carpenter with J.P. Henry Contractors, installs seats on the Field Suite Level of Busch Stadium as he works above the newly-developing infield Friday. (P-D file photo)

July 20, 2005--Painter Keith Throop uses a lift to touch up the primer on the beams supporting the Spruce St. entrance adjacent to Highway 40, as the new Busch Stadium takes shape. (P-D file photo)

July 19, 2005--Jim Amerman of J.P Henry Co. installs seats in basic Cardinal red along the upper deck on the first-base side of the stadium. (P-D file photo)

July 25, 2005--Workmen swarm over the 7th Street entrance to the new Busch Stadium which they are scurrying to finish by season's end. (P-D file photo)
© Copyright 2021 STLtoday.com, 901 N. 10th St. St. Louis, MO | Terms of Use | Privacy Policy
Powered by BLOX Content Management System from TownNews.com.
You don't have any notifications.