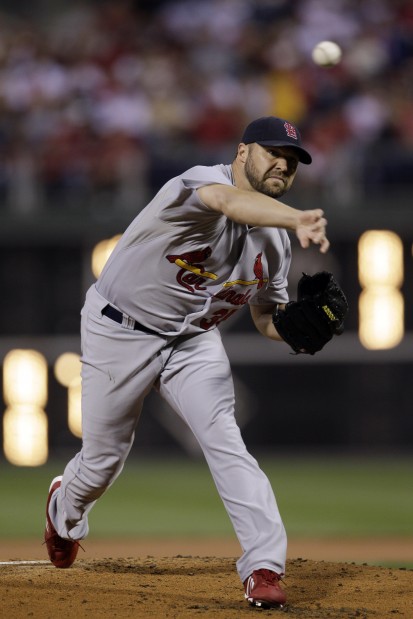 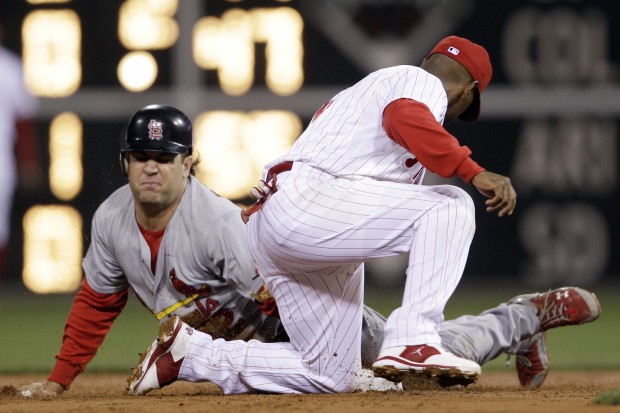 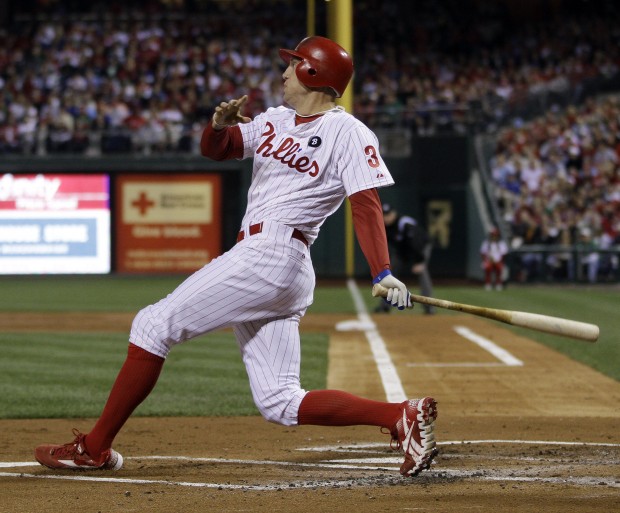 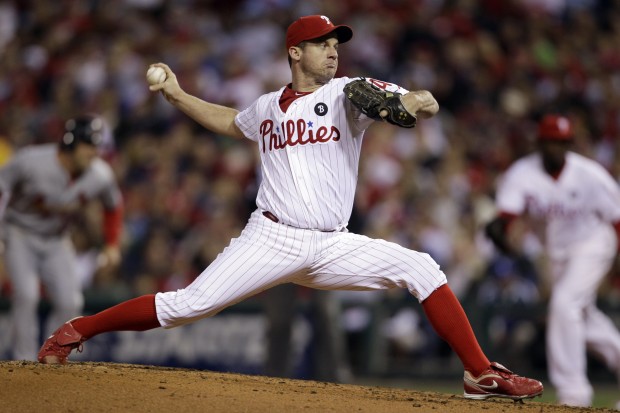 While Roy Oswalt has had some durability issues the past few seasons, he'll likely seek a one-year deal to show teams that he's still capable of making 30 starts and performing at a high level. (AP Photo/Matt Slocum) 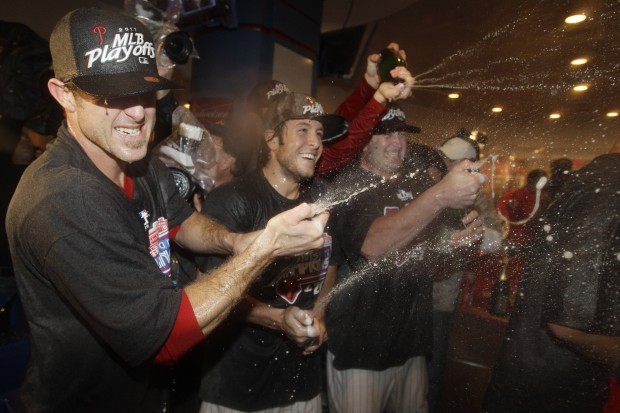 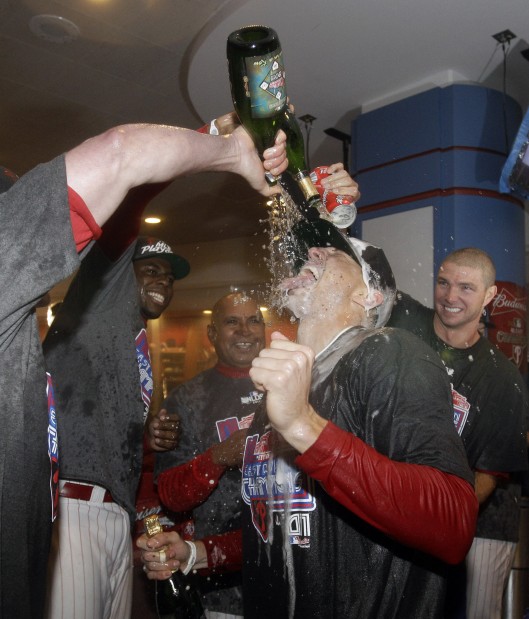 Philadelphia Phillies' Hunter Pence, second from right, celebrates in the locker room with teammates after they beat the St. Louis Cardinals 9-2 in a baseball game to clinch the NL East title Saturday, Sept. 17, 2011, in Philadelphia. (AP Photo/Matt Slocum)

PHILADELPHIA • For one team, Saturday night at Citizens Bank Park represented a milestone, a celebration, and the fulfillment of an outcome long thought inevitable.

For the other, it posed another hurdle and perhaps this time something insurmountable within a rapidly shrinking season.

The Philadelphia Phillies completed a trek to their fifth straight National League East title at the Cardinals' expense. On a night when Cardinals starting pitcher Jake Westbrook never found a rhythm, counterpart Roy Oswalt offered seven dominant innings in what ended in a deceptive 9-2 blowout before a crowd of 45,470.

"We invested a lot in that game," said Cardinals manager Tony La Russa after watching watched his team rally to 3-2 in the eighth inning, only to then witness two misplays aid the Phillies' six-run response in the bottom half.

Moments after they had put the tying run at second base during their four-hit rally, several Cardinals served as spectators to the Phillies' rather modest on-field celebration.

"I just wanted to see how they celebrated," Schumaker said. "It was impressive. They just high-fived and did the normal thing. It's just a stepping stone for them. I want that here."

This year's degree of difficulty became exponentially higher for the visitors.

A combination of events left the Cardinals 4½ games behind the Atlanta Braves' wild-card lead and 6½ games off the Milwaukee Brewers' lead in the NL Central. With only 11 games remaining, they increasingly appear to have too little time to do too much.

"We're just trying to win to stay in this thing," La Russa said. "I've got no complaints except you wish the score had gone the other way."

The Phillies scored only two of 10 baserunners through four innings as La Russa summoned specialist Arthur Rhodes to put down a fourth inning that chased Westbrook. "We played with a lot of urgency," the manager said.

Giving away two extra outs in the eighth proved fatal to the Cardinals chances as Victorino bounced an RBI single over second base for the inning's first run before Furcal stayed back on a bases-loaded grounder that left him unable to get a force at second base. He instead hurried a throw to first that failed to beat Hunter Pence.

"I should've come after the ball and thrown to first base for the out," Furcal said. "It was a stupid thing to do."

The next hitter, Ibanez, unloaded on a fastball that Dotel let wander over the middle third of the plate.

"It's just like Furcal says, ‘Be happy before the game because you don't know how you'll feel after the game,'" Dotel said.

La Russa boasted of his team's effort in a game that left both clubs with 10 hits. The Cardinals used four relievers to hold the game before the eighth-inning detonated against Marc Rzepczynski and Dotel.

"It's more than just the starting pitchers. It's our team. Didn't we have a chance in that game? It's a one-run game going into the bottom of the eighth," La Russa noted. "The guy who has hands as good as anybody (Descalso) gets a tough hop and makes an error. That wasn't a matter-of-fact game. That was a hellacious effort from the Cardinals. I bet they were worried over there."

"The score was very misleading, I think," La Russa said.

The Cardinals have won 15 of their last 21 games and played the Phillies better than any National League club. A dominant starting rotation most clearly defines the teams' differences. Oswalt offered a mix that included a steady diet of change-ups, a relatively new weapon. Oswalt, who eliminated the Cardinals from the 2005 NLCS, kept the Cardinals off balance more than he overpowered them.

"He wasn't the same guy I saw last year," Schumaker noted. "He was very good before, but you usually knew you were going to get fastballs. He was pitching tonight. He once was an old-fashioned country hardball guy who dared you to hit it. Tonight he had a change-up working with a curve and a fastball that was 93-94."

The Cardinals never seriously threatened Oswalt. He retired 18 of 21 hitters through six innings, walked none against six strikeouts, allowed only two runners into scoring position and left with a 3-0 lead after 107 pitches.

Molina reached him for two hits, including a seventh-inning single that narrowly missed clearing the left-field wall. Otherwise, left fielder Lance Berkman had to steal his way into scoring position in the second inning before Molina doubled in an otherwise unproductive fifth.

Westbrook warmed before the game without incident but exhibited a strangely choppy delivery. He walked five and quickly trailed when Pence pulled a two-out double to score Rollins in the first inning.

A double play helped Westbrook avoid second-inning damage. Consecutive two-out walks loaded the bases in the third before a pop fly from Ibanez ended the threat.

The fourth inning, however, proved inescapable after Furcal failed to hold onto Westbrook's throw on a one-out sacrifice. A single loaded the bases before Westbrook walked Victorino on four pitches to force home a run and bring La Russa to the mound.

"I put myself in bad situations early every inning," said Westbrook, who allowed three hits and a walk to begin his four frames. "I wasn't in a position to have quick innings. I felt like I was battling the entire night."

The Cardinals manager has focused on his defensive alignment late in games.

Cards Talk: Sound off about Berkman

The Cardinals saw their 3-game winning streak snapped by the NL East champion Phillies in a 9-2 rout.

While Roy Oswalt has had some durability issues the past few seasons, he'll likely seek a one-year deal to show teams that he's still capable of making 30 starts and performing at a high level. (AP Photo/Matt Slocum)

Philadelphia Phillies' Hunter Pence, second from right, celebrates in the locker room with teammates after they beat the St. Louis Cardinals 9-2 in a baseball game to clinch the NL East title Saturday, Sept. 17, 2011, in Philadelphia. (AP Photo/Matt Slocum)