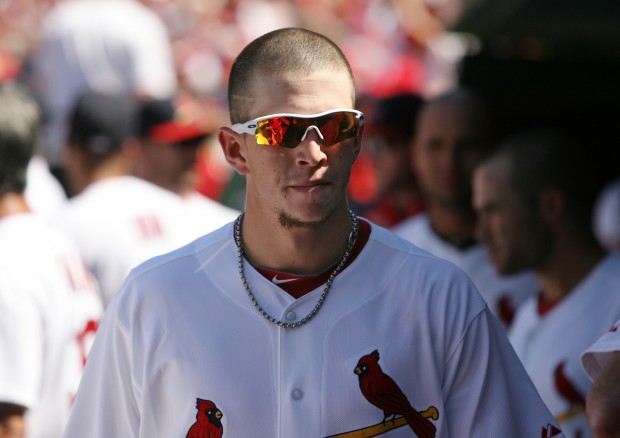 September 5, 2010 -- Cardinals centerfielder Colby Rasmus in the dugout during a game between the St. Louis Cardinals and the Cincinnati Reds at Busch Stadium in St. Louis, Mo. Chris Lee clee@post-dispatch.com 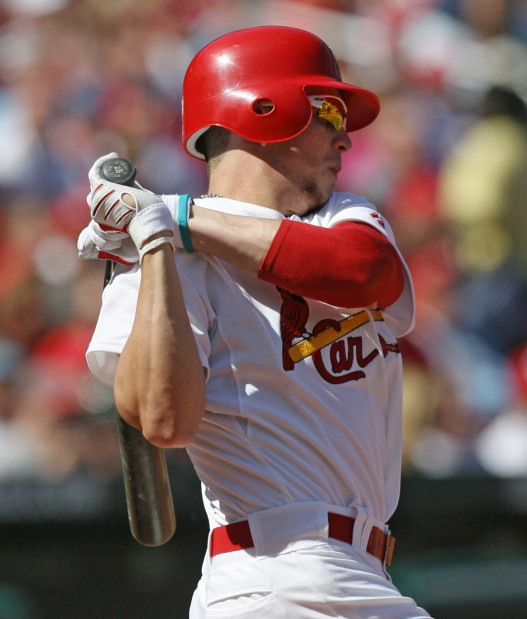 Given time and patience, most believe Colby Rasmus will prove to be an impact player. (Chris Lee | clee@post-dispatch.com) 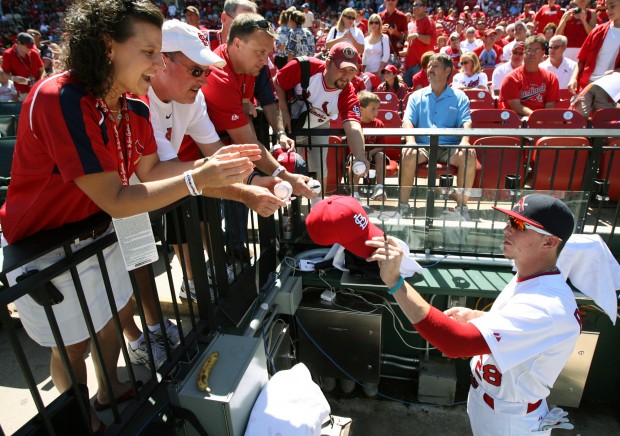 September 5, 2010 -- Cardinals' Colby Rasmus signs autographs for fans before a game between the St. Louis Cardinals and the Cincinnati Reds at Busch Stadium in St. Louis, Mo. Chris Lee clee@post-dispatch.com
BY JOE STRAUSS • > 314-340-8371

In a bizarre twist to what has at times been an awkward relationship, Cardinals manager Tony La Russa confirmed Sunday that center fielder Colby Rasmus sought a trade earlier this season.

The admission brought at first no comment, then later a denial from Rasmus, who spoke at length with La Russa and general manager John Mozeliak about the handling of the matter after the team's 4-2 win over the Cincinnati Reds.

Responding to a report in Sunday editions of the Post-Dispatch that Rasmus had requested a trade, La Russa acknowledged the incident but suggested underlying issues that fed the request had since eased.

"I think he's thinking probably the grass is not greener other places and that this is a good situation, a great organization, teammates, everything. That's what I think. You can ask him," La Russa said.

Rasmus declined to confirm or deny any trade request before the game and afterward offered a denial following a face-to-face discussion with La Russa and another via phone with Mozeliak.

"I never did that," Rasmus told a crush of reporters at his locker. "I don't know where that's coming from. I just want to play baseball and have fun."

Pressed before the game about Rasmus' possible motivation for a trade, La Russa replied, "What do you want me to say? Ask Colby. Just ask Colby. He can handle it however he wants to handle it. He's capable of explaining himself and what he was thinking at the time."

Rasmus declined the opportunity before the game to state whether he hoped to be part of next season's Cardinals team. "I'm not going to say either way," Rasmus said.

Told about La Russa's suggestion that their relationship had improved, Rasmus replied, "That's what he said. I don't know. I've got no comment on that."

Though almost two months old, the matter stoked simmering intrigue surrounding a relationship parsed almost daily depending on Rasmus' availability when injured or his presence in the lineup when healthy.

Albert Pujols described a trade request as "disrespect," adding that he was approached by a "veteran guy" bothered by the report. "If you don't want to be a part of this, then you need to figure out another place to go play," he said.

Rasmus made his trade request to La Russa on July 24 during a heated exchange in the visiting manager's office at Wrigley Field. Rasmus had been among a number of players tardy to Wrigley Field after team buses were kept away from the team hotel by early morning street flooding. (Infielder Felipe Lopez arrived at the park after Rasmus and was scratched from the start.)

La Russa scolded Rasmus during the July meeting and threatened to option him to Class AAA Memphis, sources familiar with the situation confirmed. Rasmus later voiced his concerns to Mozeliak.

Mozeliak conceded Sunday afternoon that he was aware of "issues" between player and manager but insisted neither Rasmus nor his agent, Paul Cohen, issued a formal trade request.

"I became aware of a conversation between Tony and Colby during that time, but I was never approached about a trade," Mozeliak said.

Rasmus more recently said that he and La Russa have reached an improved understanding and that he is open to learning. He reiterated the point Sunday while admitting an occasional rub. "We've had our times, but it's a tough game out there, a lot of pressure's involved. Some things happened in the heat of the moment, but everything's fine."

Rasmus briefly led the National League in on-base-plus-slugging percentage before the All-Star break and contributed two hits, including a double, in Sunday's win. He exited the game hitting .267 with 19 home runs and 54 RBIs. He ranks third on the team with a .499 slugging percentage, fourth with a .351 on-base percentage.

La Russa consistently has denied friction between him and the most celebrated position player to graduate from the Cardinals' player development system since Pujols. La Russa on Sunday challenged a notion that he has strained Rasmus' playing time, going as far as to look up his plate appearances. The manager also used Sunday's postgame news conference to challenge a portion of Sunday's report that cited his irritation with Rasmus for taking off-campus batting practice with his father.

La Russa insisted the issue has not colored how he has handled Rasmus. "Not at all," he said, "because I talked to him at the time about what were the issues.

"Last year it was part of growing up. I think he's grown up this year quite a bit. He's on his way."

The matter chafed at Pujols, who initially believed Rasmus had approached management in the past several days. Told the issue was about two months old, the three-time National League MVP cut him little slack.

"For a young kid to come up and say that he wants to be someplace else, I don't know why," Pujols said. "I guess he said it two months ago. Two months ago we were in first place. Who doesn't want to be on a team in first place battling for a spot in the playoffs? Like I say, he was young, but he needs to approach that in a different way."

During spring training, Rasmus admitted to problems integrating within the Cardinals clubhouse as a rookie. Pockets of resentment greeted his arrival as the favored child of a player development system eager to produce an impact talent. Last season's trade of Chris Duncan and the free-agent departure of Rick Ankiel opened additional playing time and helped diminish what Rasmus felt as a negative vibe. At times this year Rasmus has been reminded by uniformed personnel that he is "Luhnow's baby," a reference to vice president of amateur scouting and player development Jeff Luhnow.

"I feel like I've got a pretty good relationship with most of the guys. I think guys are starting to learn me better," Rasmus said. "You come up and put up a little bit of a guard being a young guy, kind of staying in your locker not saying much, so it takes a little time to get to know some of the guys. But as far as that goes, I think everything is square. We're just trying to win some baseball games."

"Colby has had some issues about how happy he is here, and I think it's just a young guy and a lot of attention," La Russa said. "I think if he hangs around here long enough he'll appreciate what it means to be a Cardinal."

A grand slam off the bat of Yadier Molina helped the Cardinals to an 8-6 victory over the Milwaukee Brewers this afternoon.

La Russa on Rasmus: It's not him or me

Manager: "Our relationship is nowhere near that." Player: "I could have handled it (differently)."

Redbirds win series vs. Cincinnati for the fifth time in six tries this season.

A reason the Cardinals coveted, pursued and ultimately enriched outfielder Matt Holliday in the past year happened in the sixth inning Sunday.

La Russa is on the alert for fatigue

Manager is concerned about three core players who are playing every day.

Reds are happy to avoid sweep

They came, they saw, they booed. But all of the harassment and negative vibes that Cardinals fans poured on Cincinnati's Brandon Phillips the …

September 5, 2010 -- Cardinals centerfielder Colby Rasmus in the dugout during a game between the St. Louis Cardinals and the Cincinnati Reds at Busch Stadium in St. Louis, Mo. Chris Lee clee@post-dispatch.com

Given time and patience, most believe Colby Rasmus will prove to be an impact player. (Chris Lee | clee@post-dispatch.com)