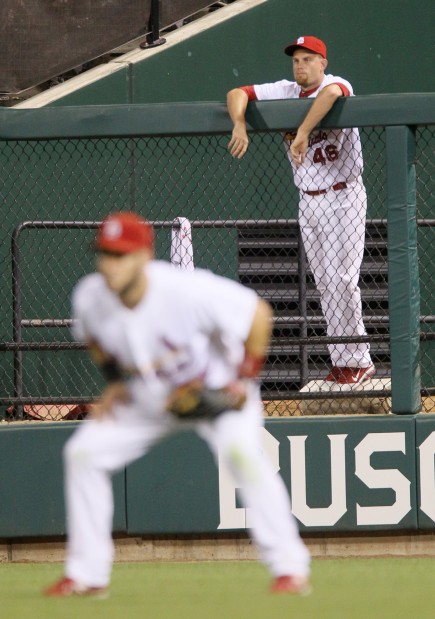 July 27, 2011 -- With the addition of pitcher Edwin Jackson to the starting rotation, pitcher Kyle McClellan has been returned to the bullpen during a game between the St. Louis Cardinals and the Houston Astros at Busch Stadium in St. Louis, Mo. Chris Lee clee@post-dispatch.com 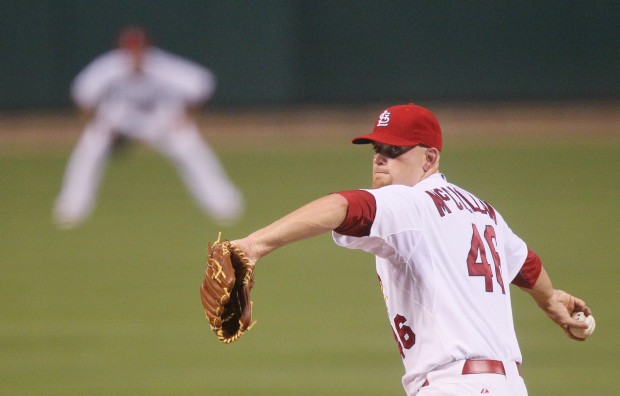 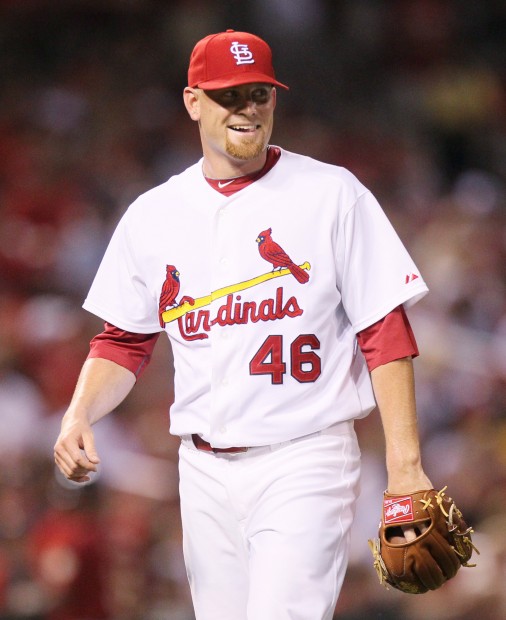 July 25, 2011 -- Cardinals starting pitcher Kyle McClellan smiles as he leaves the field after retiring Houston's Carlos Lee on a long fly out to end the top of the sixth inning during a game between the St. Louis Cardinals and the Houston Astros at Busch Stadium in St. Louis, Mo. Chris Lee clee@post-dispatch.com

Once he had been told earlier in the day about his new/old job description and had his bullpen session between starts canceled, Cardinals righthander Kyle McClellan popped his head into manager Tony La Russa's office and all but volunteered his services as a reliever for Wednesday night's game against Houston.

La Russa told McClellan to check with "PC," as in pitching coach Dave Duncan, but Duncan already had determined that McClellan's first "live" night for relieving will be Friday. That would be three days after McClellan's last start, which covered seven innings, and one day ahead of the start he won't be making now that he is a reliever again.

With newly acquired Edwin Jackson, who will make his first Cardinals start Friday, on board, McClellan is out of the rotation for the foreseeable future and back in the bullpen. But he will be in a more prominent role than the one he had when he first joined the Cardinals' bullpen in the 2008 season and where he continued to make his pitching home until this year.

La Russa even suggested that McClellan could close games if Fernando Salas needed a night off and McClellan said he would be happy to do that.

Is he happy the change was made Wednesday? Probably not, but, with the trade deadline looming, he had steeled himself for such a possibility and said the right thing about doing "whatever it takes to help this team win.

"This could be the last time in my career I have a chance to do it, or in anybody's (career)," said McClellan. "You don't want to take it for granted any time (the front office) shows the effort to put the pieces in place. It's exciting."

Duncan has virtually one-third of a new staff and one-fifth of a new rotation all of a sudden.

"In the bullpen, I like — I don't know how to say his name — (Mark Rzepczynski)," said Duncan. "I think he's really going to be a help.

"And everything I've been able to find out about (Octavio) Dotel is that he's still throwing really well.

"As far as the rotation goes, I've heard nothing but good stuff about Edwin Jackson's physical abilities. It's going to be interesting seeing him because you would think that a guy with a reputation of having electric stuff would have had more success (55-58). He's going to be a real interesting guy."

It is puzzling that Jackson has been traded five times by age 27, but La Russa said all he knew was that Detroit manager Jim Leyland, who had Jackson for a season, called to tell La Russa that Jackson would help the Cardinals. "I didn't ask about him personally," said La Russa.

In the big picture, La Russa said, "Because of the specialness of McClellan, our bullpen got deeper and we got a competitive starter to take his place. We're deeper and better on paper and now we've got to show it on the field."

Duncan admitted he was a "little sad because it means that McClellan won't continue to start. I felt it was a really good learning experience for him and I feel that sometime in the future, he will be a starting pitcher."

McClellan 'showed a lot of character" in accepting his new assignment, said La Russa. "He could have been bitter."

Winless in his last eight starts before Monday, McClellan posted a 6-6 record as a starter with one more win coming in relief when, in a La Russa strategic move against Cincinnati, he entered the game early as a reliever after a rain delay.

"I felt like the time I was in the rotation, I did a good job," McClellan said. "I don't feel that I pitched my way out of a job. I feel confident that I've proved not only to myself but to the organization and to everybody that I can be a starting pitcher in this league. And down the road, that is something I'd prefer to do. But, given the situation, it just doesn't fit right now.

"You've got to understand that you have a chance to win and some guys have to do some things they're not comfortable with or don't want to do. In my case, I've done the bullpen. I'm OK with it.

"I think I've shown I can do a little bit of everything, which is nice. On this team, right now, (relieving) is what they need me to do and that's what I'm going to do. It's always exciting to know that every day when you come to the park, you have a chance to contribute to a win."

McClellan has had six big-league saves and he said, "Over the last few years, with what I've done in the bullpen, I don't think there's anything that shows I can't do that. I definitely wouldn't shy away from it."

Or, as Duncan put it, "I wouldn't be afraid to put him out there in the ninth inning."

But, at least for now, you won't see McClellan in the first inning.

The Cardinals made Colby Rasmus the centerpiece in a three-team exchange that brought them four players from the Toronto Blue Jays and Chicago White Sox.

Life after Rasmus; talk about trade and more

Bernie Bytes: The Trade: Morning After

Kyle McClellan respond with class; Edwin Jackson is better than his stats and there's a lot to like in Marc Rzepczynski.

July 27, 2011 -- With the addition of pitcher Edwin Jackson to the starting rotation, pitcher Kyle McClellan has been returned to the bullpen during a game between the St. Louis Cardinals and the Houston Astros at Busch Stadium in St. Louis, Mo. Chris Lee clee@post-dispatch.com

July 25, 2011 -- Cardinals starting pitcher Kyle McClellan smiles as he leaves the field after retiring Houston's Carlos Lee on a long fly out to end the top of the sixth inning during a game between the St. Louis Cardinals and the Houston Astros at Busch Stadium in St. Louis, Mo. Chris Lee clee@post-dispatch.com