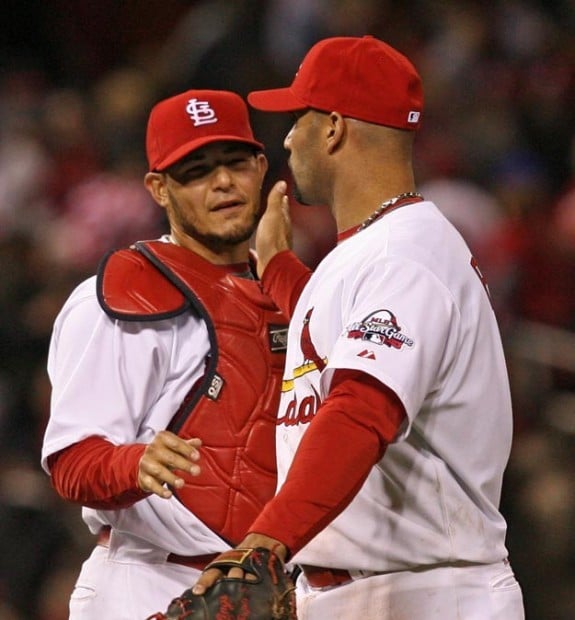 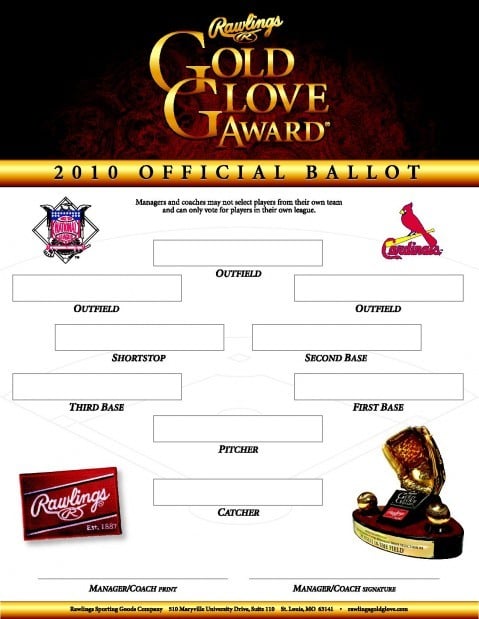 The St. Louis Cardinals are certain to add to their history this afternoon as the most defensively decorated franchise in the majors, and Yadier Molina is expected to lead the way by doing what no other Cardinals catcher has.

Molina is the favorite to win his third Rawlings Gold Glove, matching the Cardinals totals of Mike Matheny and Tom Pagnozzi, both of whom won three with the Cardinals. But neither of them won the award in consecutive seasons.

Unlike last year, which seemingly offered a new award every day for first baseman Albert Pujols, the Cardinals' three-time MVP has been a (unofficial) runnerup for the major awards so far this season. As discussed in yesterday's Round 2, Pujols is expected to finish second in the National League MVP race this season, to Cincinnati Reds' first baseman Joey Votto. But, today, the Gold Glove could be Pujols' to shine. He's a favorite to win his second.

The Gold Glove awards are determined by a vote of managers and coaches from each league. The ballot, which you can see an official copy of attached to this blog entry, says that a voter cannot elect a player from his team and can only vote for players within the league. Already this season the voting process has been a favorite target. Cardinals writer Matthew Leach, over at MLB.com, argued that the voting process has to change, either with an expanded pool of voters (players! writers!) or with a panel put together expressly for the purpose of judging defense. On the list of American League winners, Leach and other detractors of the voting process got their Exhibit A: Derek Jeter.

Jeter, the New York Yankees captain, had a pedestrian season and saw significant declines in his play. Yet, there he was, an incumbent voted back into office because of name recognition and muscle memory. Rob Neyer, at ESPN.com, argued that Jeter may have five Gold Gloves - only four shortstops in history have won more - but that's four more than he deserved.

I can't knock that many off his shelf, but clearly the voting needs an update.

An expanded pool of voters makes sense, one that includes players and certainly includes observers who are able to watch more games than the participants. There are plenty of other suggestions out there, especially in the Jeter Fallout. But allow me to make one: Voters should be quarantined from fielding percentage. Keep it away from them. That statistic is toxic. There's no way there are 14 better defensive third basemen in the game than Adrian Beltre, and yet there his .957 percentage sits, ranked 15th among the 26 third basemen who had at least 200 chances this season. Jeter had a .989 fielding percentage this past season, and of course he did. He had 134 fewer assists than the league leader, Chicago White Sox shortstop Alexei Ramirez (499), and Jeter had nearly a 100 fewer total chances than Cardinals shortstop Brendan Ryan despite playing 176 1/3 more innings at the position. Fielding percentage is statistical pyrite.

That's not to say that other defensive metrics are bulletproof. While regular readers of this here blog will recognize my fondness for the plus/minus stat, it is not infallible. It's really good. It's tangible. It helps us quantify and describe what our eyes tell us. But it's not perfect. Zone rating as its problems. The digital eye that is supposed to help measure "range" and "reaction time" hasn't provided the sort of public data that is readily accessible. There isn't that unifying equation for defense, that one-stop shop for the game's best, but there have been great strides (many by John Dewan at Baseball Info Solutions) in measuring and understanding defensive value.

"The secret's getting out," an unidentified AL general manager told Sports Illustrated in 2009. "Defensive metrics have almost caught up to the offensive side. Some people would say they didn't think they'd see this day. But the revolution's here."

So why is voting still stuck in the dark days of fielding percentage?

Perhaps, it's not entirely. Some slivers of light are starting to shine through. Tampa Bay's Evan Longoria won the AL's Gold Glove at third base despite having twice as many errors and a meeker fielding percentage than Alex Rodriguez. Makes sense. The eye test tells us that Longoria is a better defensive player than Rodriguez at the Hot Corner, and so do the metrics. Longoria was a plus-17 at the position, third best in the AL, and his 13 "runs saved," per Bill James Online, ranked fifth in baseball. Rodriguez, meanwhile, was a minus-5 on the plus/minus scale and his minus-4 runs saved ranked 20th in the majors.

Molina offers another example of voting gone awry. It was two years after Molina had established himself as the league's best catcher - and certainly the majors' best gunslinger behind the plate - that he won his first Gold Glove. The Cardinals' catcher cherishes the award. That necklace that he kisses during his at-bats has a golden catcher's mitt charm dangling off of it. And, yet, he once acknowledged that he won a Gold Glove after a subpar defensive season. Doesn't matter. He's got name recognition. He's got a reputation. He still has the numbers (pickoffs, runs caught stealing, etc.). He's an incumbent. Molina proves that this current method of voting does get it right. Eventually.

With a win this afternoon, Molina will match Joe Mauer's run of three consecutive Rawlings Gold Glove awards. (Mauer won yesterday.) Only nine catchers in the game have won more than three Gold Gloves, and that group includes Molina's mentor, Matheny. The former Cardinals catcher and current Cardinals exec won three with the club and one with San Francisco.

Combined, Cardinals' catchers have - before today's announcement - won eight Gold Gloves. With the help of some crack researchers, including Dan Kimack at Fleishman-Hillard, we were able to go through the Rawlings Gold Glove history and determine that no team has won more Gold Gloves than the Cardinals. (The motivation behind the search, for me, was some book I was writing or something.) The Cardinals have won at least two Gold Gloves at every position, and from 1957 to 2009 their 76* are the most, ahead of Baltimore and the New York Yankees.

* The number reaches 77 if you include a Gold Glove that Keith Hernandez won the same year he was trade.

Yes, the man behind the T-shirt designs from several years ago is now working at Rawlings Sporting Goods, and this morning, hours before the Cardinals are expected to add to their totals, he offers up some addition nuggets of golden goodness:

-- 293 players have been recognized as Rawlings Gold Glove winners.
-- The New York Yankees have won 62, including three this season. Tampa Bay and Arizona have the fewest with four, and the non-expansion team with the fewest is Milwaukee at nine.
-- 22 different Yankees have been honored, and Robinson Cano broke the tie yesterday with the Cardinals. There have been 21 Cardinals honored, and since Molina and Pujols have already won, today isn't likely to boost that total.
-- 48 players have a Rawlings Gold Glove Award with multiple teams.

All of that helps remind us that the voting process may be outdated and the voting itself may be sluggish to recognize the game's top defenders, but the award itself - that Gold Glove perched on top of a wooden base - hasn't lost any luster.

How did McGwire do?

With a season under his belt, hitting coach hopes Cardinals rely less on video.

Yadi is first Cards catcher to win three Gold Gloves in a row; Pujols gets first since '06.

Molina is voted NL’s best at catcher; Pujols gets the award at first base.

Out of 533 minor-league FAs, the search is on for the next Nunez, Al Reyes or (yes) Ludwick who could offer needed depth.

Sometime after the stats had settled and the votes counted, Albert Pujols would look back at his 2006 season and suggest it was his finest yet…

Cards' catcher and shortstop graded out as the best in the majors at their positions. Also: Ludwick has La Russa's vote.