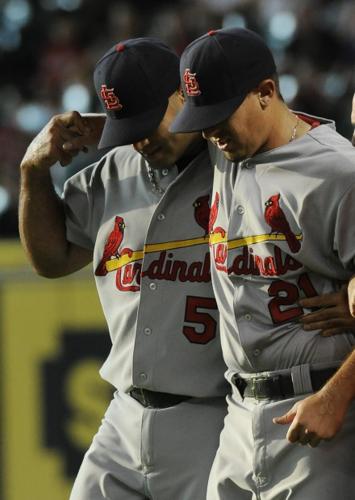 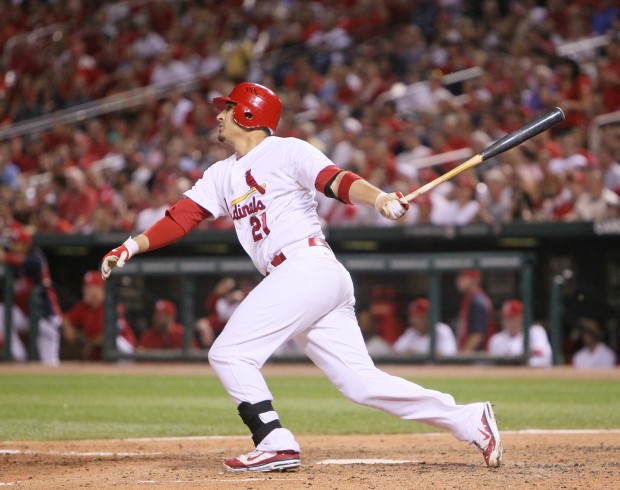 Allen Craig. The Cards generated plenty of runs during his latest absence, but Beltran is going to need some rest in right field and rookie Matt Adams will be hard-pressed to continue his early offensive pace at first base. Craig hit .373 between injuries and will try to become an impact offensive player with Lance Berkman sidelined until at least August.

HOUSTON — With consecutive games against lefthanded starting pitchers, including tonight's at a ballpark that caters to righthanded batters, Cardinals manager Tony La Russa had designs on planting Allen Craig in the middle of the lineup and watching him swing.

Instead, Craig will be healing, sidelined by a knee injury.

The Cardinals outfielder needed three stitches to close a gash in his right knee, the result of a crash Tuesday night into the metal fencing that separates theseats on Minute Maid Park's first-base line from a sliver of foul territory. Craig also sustained a deep bruise in the knee. La Russa said he is out for the series in Houston, and Craig's availability will be revisited this weekend in Milwaukee. La Russa said the team can play shorthanded for a series or two without putting Craig on the disabled list.

Craig said the physician he met with told him there wasn't an injury more severe than the bruise. The outfielder said he was in "de-swelling mode."

"It's sore," said Craig, who had the leg wrapped and couldn't bend it comfortably. "Once the swelling gets out of it, it should get better quickly."

Before closer Fernando Salas faced Jason Bourgeois with two outs in the ninth inning Tuesday night, La Russa already had called down to the bullpen to warm up Ryan Franklin. Out or not, Bourgeois was the last batter Salas would face.

Salas struck out Bourgeois and earned his 11th save of the season, but to finish the two-inning assignment he needed 44 pitches. Due to the workload, La Russa said he'll have to finish the series in Houston without Salas and would play the ninth inning "by ear." That improvisation will include Franklin, whose removal from the closer role opened the way for Salas.

"Whether it's the setup role or the closer, whatever it is, I want to make a difference for the team," Salas said of his emergence as the Cardinals' save solution. "As a closer or as a setup man, I can do that. ... I had to stay aggressive (Tuesday) and make what pitch I could. I had to be aggressive in the zone. I needed all of my pitches."

The adviser for Cardinals first-round draft pick Kolten Wong said he and his client do not expect protracted negotiations with the Cardinals.

"I believe it will get done pretty quickly," said Wong's adviser, David Matranga. "It will really be at the pace of the Cardinals. Kolten wants to get started, and the Cardinals have had their eye on him for awhile, so we all have a pretty good idea what the range is."

In the past few years, the Cardinals have taken more than a month if not right up to the mid-August deadline to sign their first pick. Last year's pick, Zack Cox, agreed to a deal and a spot on the 40-man roster a few hours before the deadline. Wong, a junior at Hawaii, is likely to command a bonus close to the slot that is suggested each draft by the commissioner's office.

The slot for the 22nd pick this season is expected to be around the $1,287,000 it was last season. Both sides agree that Wong could play this summer for an affiliate. Matranga said he could see negotiations taking a couple of weeks depending on the Cardinals' timetable.

"It's a good thing for (Jay)," said Franklin, who said he plans to do some work with his brother after retiring from the game. "I think he's going in the right direction."

Albert Pujols laughed when asked why he shaved off his goatee before Tuesday's game and wondered why his hairstyle or facial hair would be of interest. He admitted that he did get a message from his wife commenting on the new look. "There's no reason," he said. "I got here (Tuesday) and thought, 'OK, let's go clean.' ... I'm not superstitious. Trust me, the last thing I am is superstitious." ... On Tuesday, Ryan Theriot became the third shortstop in Cardinals history to have a hitting streak of at least 20 games, joining Lou Klein (1943) and Placido Polanco (2001). While both of those players appeared at shortstop occasionally during their hitting streak, Theriot is the first in club history to have a hitting streak that long as a full-time shortstop. ... La Russa said members of his Animal Rescue Foundation arrived in Joplin, Mo., on Tuesday to help with pets displaced or abandoned during last month's tornado. "You do what you can and you add all the pieces together and hope it helps," he said.

How critical is Cardinals' series at Milwaukee?

A lot of baseball left, but it could set the tone for later.

Allen Craig. The Cards generated plenty of runs during his latest absence, but Beltran is going to need some rest in right field and rookie Matt Adams will be hard-pressed to continue his early offensive pace at first base. Craig hit .373 between injuries and will try to become an impact offensive player with Lance Berkman sidelined until at least August.