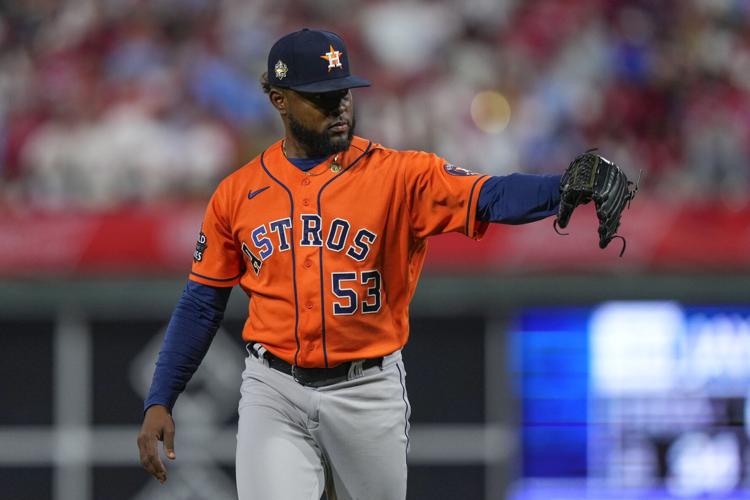 Houston Astros starting pitcher Cristian Javier leaves the field after the sixth inning in Game 4 of baseball's World Series between the Houston Astros and the Philadelphia Phillies on Wednesday, Nov. 2, 2022, in Philadelphia. (AP Photo/Matt Slocum) 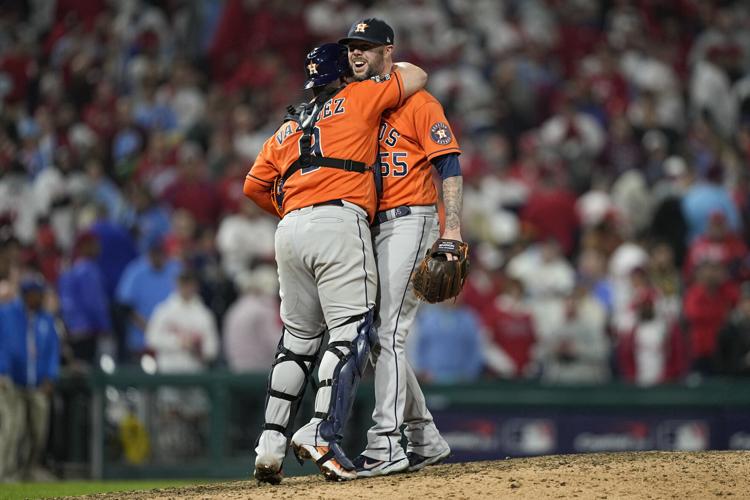 Houston Astros relief pitcher Ryan Pressly and catcher Christian Vazquez celebrate their win in Game 4 of baseball's World Series between the Houston Astros and the Philadelphia Phillies on Wednesday, Nov. 2, 2022, in Philadelphia. The Astros won 5-0 on a combined no-hitter to tie the series two games all. (AP Photo/David J. Phillip) 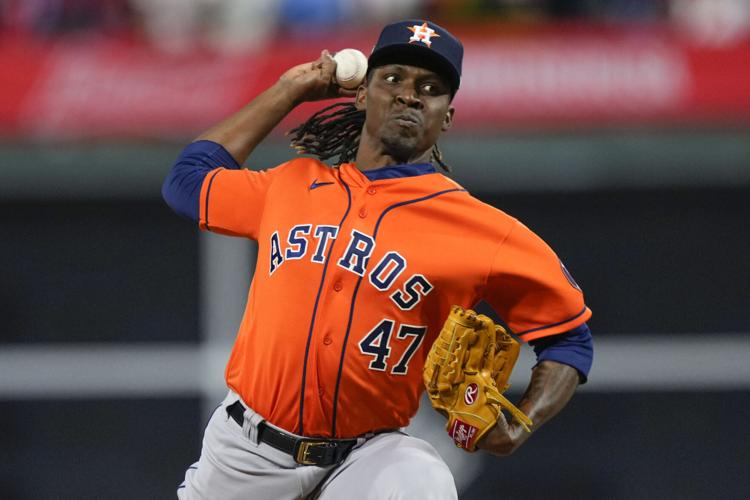 Houston Astros relief pitcher Rafael Montero throws during the eighth inning in Game 4 of baseball's World Series between the Houston Astros and the Philadelphia Phillies on Wednesday, Nov. 2, 2022, in Philadelphia. (AP Photo/Matt Slocum) 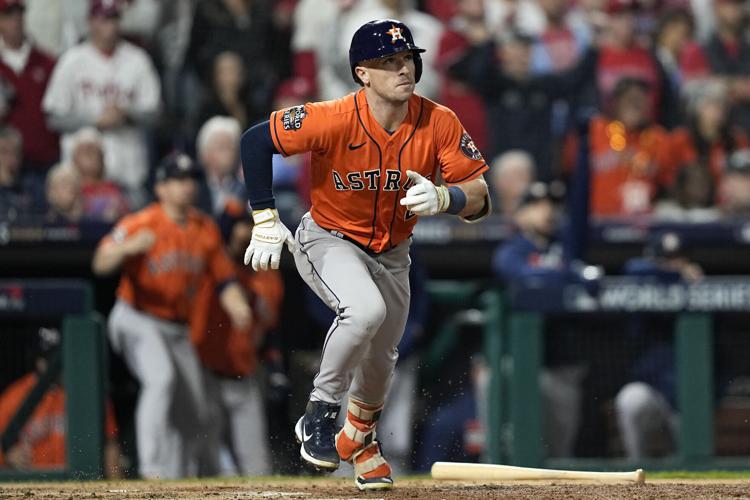 Houston Astros' Alex Bregman runs after hitting a two-RBI double during the fifth inning in Game 4 of baseball's World Series between the Houston Astros and the Philadelphia Phillies on Wednesday, Nov. 2, 2022, in Philadelphia. (AP Photo/David J. Phillip)

PHILADELPHIA — In the minors, the former outfielder with the paintbrush-flick to his delivery was so strikingly serene in his movements, so confident in his fastball that he could lacquer the strike zone with it and still leave hitters unsure what they saw.

It was just there.

Cristian Javier did not need eye-catching velocity for the mind-boggling results Houston Astros pitcher coach Josh Miller saw time and time again. Young hitters reared up to hit a fastball cruising between 88 mph and 92 mph only to be set down the same way each time, perplexed.

“It’s like he throws the invisible fastball,” Miller said.

Once an unheralded prospect who now throws what teammates call the best fastball in the game, Javier authored one of the greatest World Series starts in history for all to see. Houston’s right-hander held the Philadelphia Phillies without a hit for six innings Wednesday night to begin a combined no-hitter in Game 4 of the World Series with three teammates. For the first time since Don Larsen’s perfect game in 1956, a team was held without a hit in a World Series game. Only twice before in the postseason had a team been no-hit, and two of the three playoff no-hitters games have happened at Citizens Bank Park.

Javier is the first pitcher since Larsen to take a no-hitter that deep into a World Series game, and no pitcher had ever done so this deep into the calendar.

Houston closer Ryan Pressly finished what Javier began by pitching around a one-out walk in the ninth to secure a 5-0 victory and, for the second time this season, complete a combined no-hitter started by Javier. Not many people may have seen Javier before Wednesday, but, like his fastball, he’s been there. You just missed him.

“Like always, I just tried to stay focused, keep calm,” Javier said. “And attack the hitter as quickly as possible.”

Javier’s first career World Series start and first start with his father in the crowd gave the Astros a vital win in the best-of-seven Fall Classic. A day after the Phillies tied a record with five home runs — all off them by the fifth inning, all of them off the same Astros pitcher — Javier unplugged that power. An offense that had scored 42 runs in its first six home playoff games mustered barely more than a hard groundball. A sellout crowd shifted from raging for a commanding lead in the series to wishing for a hit, any hit to wipe that historic zero off the scoreboard. Two Phillies walked and got as far as second base against Javier, and they had to steal second on strikeouts to get that far.

Followed by scoreless innings from Bryan Abreu, Rafael Montero, and Pressly, Javier’s brilliance tied the series, two games apiece, and assured it will return to Houston this weekend for resolution.

Both sides can articulate what’s become a best-of-three series for the commissioner’s trophy. What they struggled with following Wednesday’s history was Javier’s fastball.

The Phillies knew it was coming and could not hit it.

The Astros knew how it went and could not describe it.

“It’s there and it looks like you’re going to get it, and then you’re always under it,” Houston left fielder Aledmys Diaz said. “How many fastballs did he throw in the game? And he’s still getting outs. He’s fearless with it. I know a few guys who have hit against him and they say it plays up to 97 mph, 98 mph.”

Pressly paused when asked about it.

He eventually pulled from the box score.

Going into the start, the Astros set 100 pitches as a soft cap for the 25-year-old right-hander. Their plan had two sides. First, it would keep the pitch count from swelling on the young right-hander and risking injury. Second, it would keep him available as a factor for Game 7 on Sunday, if the World Series requires it. Javier was at 97 pitches when lifted for a reliever at the start of the seventh inning. He got 18 outs. Nine of those outs were strikeouts. Five of those came in row. He finished all five with a fastball.

Not one surpassed 96 mph and he averaged 93.4 mph — the lowest average on a four-seam fastball from any of the nine pitchers who appeared in the game.

Houston outfielder Chas McCormick has never faced Javier — “Never want to,” he said — but he’s watched plenty of those fastballs in the minors and majors, and McCormick described the illusion it presents hitters. Javier’s arm swing does not come high over the top, and he whips his hand so the pitch leaves with an unusual angle and a low vertical approach to the plate. That’s partially how he tricks the hitter’s eyes. From that delivery, a fastball sinks or cuts, and that hitter is conditioned to expect that, McCormick described.

Javier’s fastball leaves his fingers with such a high spin rate so that it defies dropping just long enough to give the perception it’s rising. It’s not. Gravity says so.

Through his first two at-bats, Harper saw only fastballs.

With Vazquez leading the way, Javier did not shift from his usual approach just because the Phillies and their leader, Harper, are superb against the fastball. He used it against them. Harper accepted a leadoff walk in the second inning, but back-to-back strikeouts eventually left him stranded at second. In the fourth, Javier tested him with three consecutive fastballs. Harper fouled off two before missing a 93.3-mph fastball at the top of the zone.

“To see one of the best hitters in baseball struggle with that fastball is unbelievable,” Diaz said.

The success and swings Javier got from the fastball set up the slider for ruthless use. Of the first 21 he threw, the Phillies made contact on only one, according to Baseball Savant. It was fouled off. On 25 sliders, Javier got five swings and misses.

The Phillies only put one slider in play.

“When you think you’ve got a chance with the fastball and he throws you the slider, and it’s a big slider,” Vazquez said. “It feels better catching than facing him.”

At 16, in the Dominican Republic, Javier was an outfield with not much to distinguish himself other than a strong arm. It wasn’t until an Astros scout urged him to try pitching that he attracted an offer. Shortly before his 18th birthday — a time when most in his signing class were nearly two years younger — Javier received a $10,000 bonus from Houston. He went to work. In his first season with an affiliate in the United States, Javier had a 2.29 ERA and 66 strikeouts in 51 innings. He never allowed more hits than he had innings pitched or strikeouts, and in 2019 he had an absurd season with a 1.74 ERA to go with 170 strikeouts and only 51 hits allowed in 113 2/3 innings split between the Astros’ top three minor-league affiliates.

Javier reached the majors in 2020, and in his first 78 appearances he’s faced 1,223 batters and allowed a .178 batting average. This season, which included 25 starts, he struck out more than twice as many batters as he allowed hits.

The closest the Phillies came Wednesday was a hotshot down the first base line that Schwarber pulled — just foul.

They did not get the ball out of the infield.

Javier handled seven innings and struck out 13 in the combined no-hitter June 25 at Yankee Stadium. It took him 115 pitches to get that far. He left more history for the bullpen to make Wednesday. Abreu struck out the side in the seventh. Montero handled the eighth, Pressly the ninth. They combined to retire nine of the 10 batters he faced, and the last out was a groundball struck by J. T. Realmuto to third baseman Alex Bregman.

After the game, representatives from the National Baseball Hall of Fame collected mementos from the event. They got broadcaster and Hall of Fame pitcher John Smoltz’s scoresheet, written in blue pen. A rosin bag was on the way. And on a baseball Javier threw in the game, the Hall collected signatures from all four pitchers and Vazquez. Javier signed his name and number (53) under the World Series logo.

Fans will know it when they see it.

“They do now,” Pressly said.

Vierling, a state champ and once a Cardinals draft pick, began year as Philly's starting center fielder, but had to overcome demotion to Tripl…

Phillies tied World Series record with five homers in 7-0 shellacking of Houston in Game 3. Philadelphia has 22 homers in the postseason, surp…

Molina and Pujols, who announced retirements in spring, were removed from Cardinals' 40-man roster Tuesday and designated, through transaction…

Houston Astros starting pitcher Cristian Javier leaves the field after the sixth inning in Game 4 of baseball's World Series between the Houston Astros and the Philadelphia Phillies on Wednesday, Nov. 2, 2022, in Philadelphia. (AP Photo/Matt Slocum)

Houston Astros relief pitcher Ryan Pressly and catcher Christian Vazquez celebrate their win in Game 4 of baseball's World Series between the Houston Astros and the Philadelphia Phillies on Wednesday, Nov. 2, 2022, in Philadelphia. The Astros won 5-0 on a combined no-hitter to tie the series two games all. (AP Photo/David J. Phillip)

Houston Astros relief pitcher Rafael Montero throws during the eighth inning in Game 4 of baseball's World Series between the Houston Astros and the Philadelphia Phillies on Wednesday, Nov. 2, 2022, in Philadelphia. (AP Photo/Matt Slocum)

Houston Astros' Alex Bregman runs after hitting a two-RBI double during the fifth inning in Game 4 of baseball's World Series between the Houston Astros and the Philadelphia Phillies on Wednesday, Nov. 2, 2022, in Philadelphia. (AP Photo/David J. Phillip)