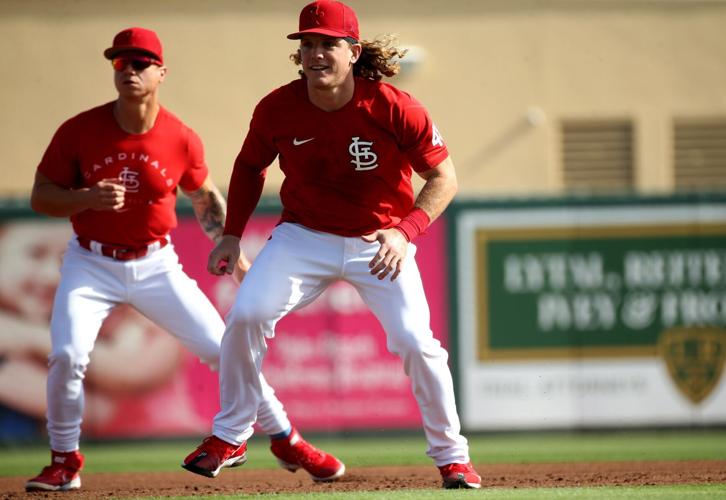 Cardinals left fielder Tyler O'Neill, left, and center fielder Harrison Bader practice base running during a drill before the start of the team's first game of spring training against the Houston Astros on Friday, March 18, 2022, at Roger Dean Chevrolet Stadium in Jupiter, Fla. Photo by Laurie Skrivan, lskrivan@post-dispatch.com 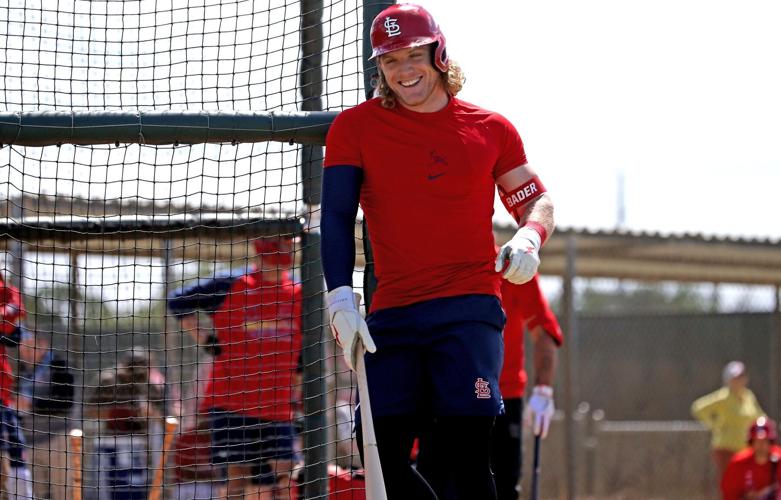 "I don’t want to play anywhere else. I want to do all I can to have the chance to stay here” with the Cardinals, Harrison Bader says.

The Cardinals and their golden outfielder plan to finalize a two-year extension as soon as Sunday, a source confirmed to the Post-Dispatch. The contract, which guarantees Bader slightly more than $10 million, allows the club to avoid an arbitration hearing. For Bader, it gets him closer to what he’s often discussed — staying with the team that drafted him.

“I want to be a Cardinal, and I want to stay a Cardinal,” Bader said before referencing Yadier Molina and Adam Wainwright. “And I don’t have to look far for a couple of teammates who have been Cardinals for life. I don’t want to play anywhere else. I want to do all I can to have the chance to stay here.”

A deal with Bader leaves Tyler O’Neill as the only Cardinal headed toward an arbitration hearing, though the club and their left fielder have continued to discuss a multi-year extension.

Because of the lockout, arbitration hearings have been pushed into the regular season with the plan to hold them on an off day. A hearing for O’Neill has not been scheduled, a source confirmed.

The Cardinals filed a salary offer of $3.4 million for O’Neill, and the left fielder’s representative countered with an ask of $4.15 million. An arbiter will choose between those two numbers if a hearing is held. Until the hearing, O’Neill will be paid based on the team offer, but if his side wins the arbitration he’ll receive back pay — plus interest, according to a source.

Bader and the Cardinals were unable to come to an agreement before the March 22 deadline to exchange figures. He requested $4.8 million, and the team offered $3.8 million. The contract being finalized will pay him $4.7 million in the first year with a $1 million bonus, a source confirmed. His salary in 2023 will be higher if incentives are reached based on plate appearances, similar to the arbitration process.

The extension covers his final two years of arbitration eligibility and would take him to free agency after the 2023 season.

“St. Louis opened its arms to me since I stepped up, the front office and the fans have had my back,” Bader said Saturday night. “Having the potential (for an extension) is what I wanted, and then doing all I can to make sure it sets up for something longer term.”

Ahead of the thunderstorms that forced the cancelation of Saturday night’s scheduled exhibition game against Houston, the Cardinals rewrote their pitching plans and had Adam Wainwright pitch against teammates on the back fields for his final appearance before a start Thursday, opening day. The right-hander threw 89 pitches in a simulated game that allowed the Cardinals to test him with a variety of situations and facing the same hitters as many as seven times.

In front of Cardinals officials and his family, Wainwright faced Albert Pujols, Paul Goldschmidt, Nolan Arenado, O’Neill, and Dylan Carlson in a loop, having to shift his pitch sequencing each time.

“I don’t think an audience does anything for him (as much as) it’s more the cat and mouse game of figuring out sequences to get guys out,” manager Oliver Marmol said. “We were able to put runners in different situations for him and try to pick him apart that way, where he had to pay more attention to (Lars) Nootbaar. The combination of controlled environment and being able to do what we want is advantageous.”

Wainwright will lead the rotation into the four-game season-opening series against Pittsburgh, and he will be followed by Miles Mikolas on Saturday, Steven Matz for the Sunday game and Dakota Hudson will start April 11.

Wainwright got through five innings Saturday, and the veteran said it’s a reasonable stride to go from the four up-and-downs of five innings to throwing more than 100 pitches and covering at least six innings against Pittsburgh on Thursday at Busch Stadium.

“I felt good, got to get my pitch count up, got to face really, really tough hitters,” Wainwright said. “They grinded me. I was looking for the first pitch rollovers. No one gave me any of those. Which was kind of annoying.”

After two weeks without throwing because of bursitis in his right shoulder, pitcher Jack Flaherty started Saturday the steps of a throwing program before taking to the field for a game of catch. Although starting the season on the injured list, Flaherty will travel with the team to St. Louis and relocate his rehab there until he advances to a point that facing hitters in extended spring training will be necessary.

The right-hander received a platelet-rich plasma injection two weeks ago to tame the inflammation inside his shoulder joint. Flaherty said at the time that his mechanics had changed coming out of last season’s oblique injury and shoulder soreness, and that he intended to use recovery time to address those and avoid future discomfort.

“He is progressing as planned right now, spot on,” Marmol said.

Yadier Molina has yet to open his final regular season with the Cardinals and already has his first post-retirement gig lined up. Molina will manage the Navengantes del Magallanes in Venezuela’s winter ball league this upcoming offseason, the team announced .

• The Cardinals are considering having Mikolas pitch on the back fields Monday instead of in a Grapefruit League game. That would clear the innings for the remaining relievers to split on the eve of the regular season. There will be a spillover of innings the Cardinals need to find after relievers such as Kodi Whitley, Gio Gallegos, T. J. McFarland, and rising prospect Jake Walsh did not pitch Saturday night.

These developments would keep the good vibes rolling as the Cardinals round third and prepare to head home.

A record five Gold Gloves return to the Cardinals field, but will defense be enough to claim the one trophy out of reach?

Wainwright, Schumaker make prank ‘pact’ after years of mischievous capers (or, is it April Fools?)

For years, the teammates have traded practical jokes big, small, and smelly, but on the 10th anniversary of the most elaborate one a new dynamic: It's Coach Schumaker now.

Cardinals left fielder Tyler O'Neill, left, and center fielder Harrison Bader practice base running during a drill before the start of the team's first game of spring training against the Houston Astros on Friday, March 18, 2022, at Roger Dean Chevrolet Stadium in Jupiter, Fla. Photo by Laurie Skrivan, lskrivan@post-dispatch.com

"I don’t want to play anywhere else. I want to do all I can to have the chance to stay here” with the Cardinals, Harrison Bader says.