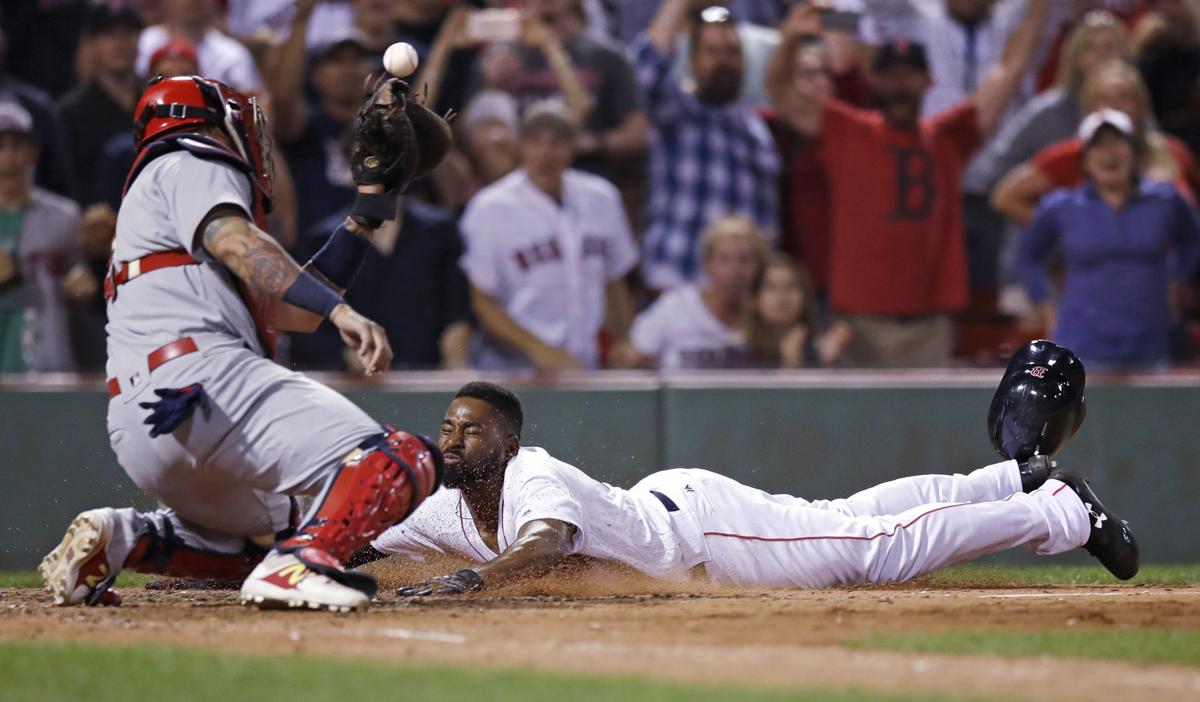 Boston's Jackie Bradley Jr. slides home with the winning run as the relay throw gets away from St. Louis Cardinals catcher Yadier Molina in the bottom of the ninth Wednesday. The Red Sox won 5-4. (AP Photo) 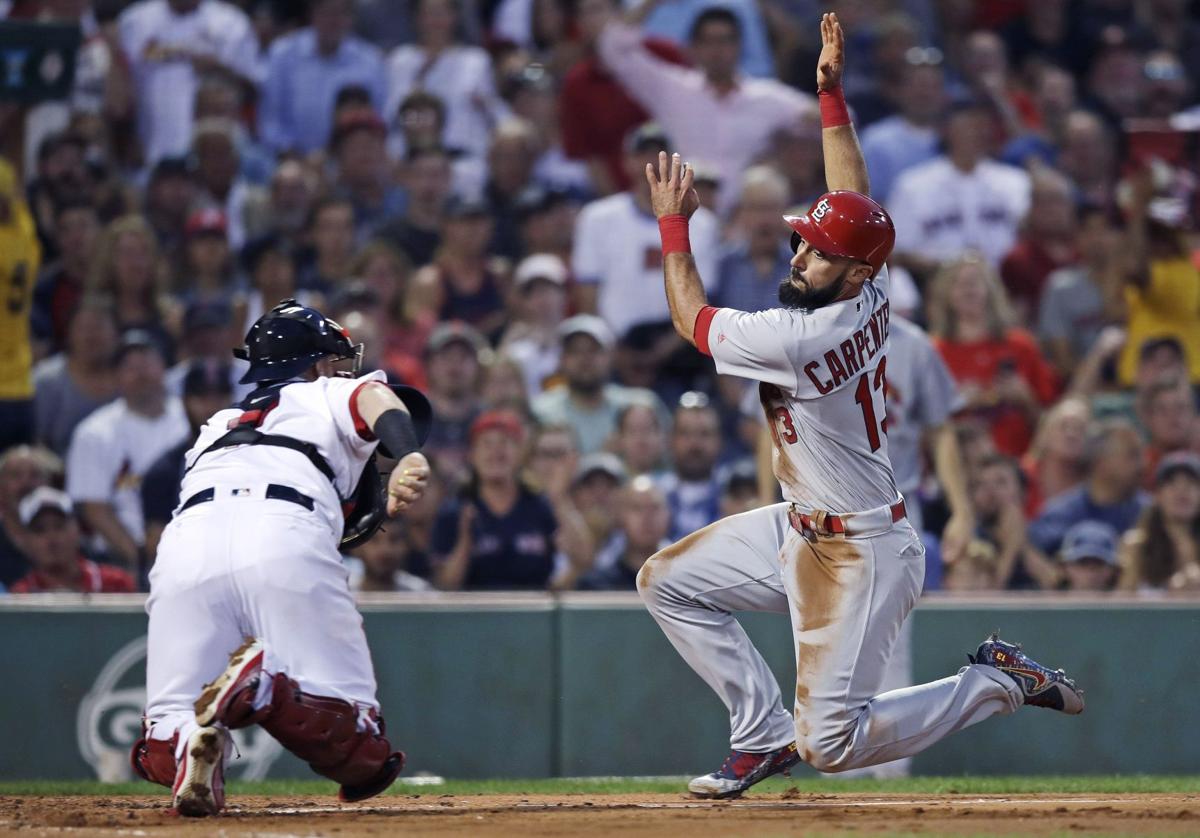 BOSTON • Long before the game unraveled, the Cardinals had reasons to come unhinged.

On the brink of solving their Boston problem and hopscotching around a possible injury to closer Trevor Rosenthal, the Cardinals ran into a foe they had feuded with most of the game and a decision no one could remember an umpire making.

He needed “a break.”

Holding on to a one-run lead and turning to their third reliever of the inning to secure it, the Cardinals were already seething over a checked-swing call when home-plate umpire Chris Segal called time out, on his own. Reliever John Brebbia was into his delivery and floated a pitch. Catcher Yadier Molina, helmet on and hands behind his back, confronted Segal and, after interceding, manager Mike Matheny became furious once he heard the reason. Ejected, Matheny shouted at Segal that it wasn’t his “show” and fans didn’t come to watch the umpire. They wouldn’t for much longer.

A handful of pitches later, Boston’s Mookie Betts drilled a game-winning, two-run hit off Fenway Park’s Green Monster. Jackie Bradley Jr. scored from first base, and though Paul DeJong’s throw beat him, Molina didn’t complete the tag. Boston danced away with a 5-4 victory Wednesday night, leaving the Cardinals only to count the times they thought they had the game won.

“Enough,” Matheny counted, adding: “Eventually something is going to give. You can only watch it so long without (breaking). It all came to a head there in the last inning.”

Its lasting bruise was only starting to purple in the hour afterward. The Cardinals are retracing their steps back to .500, having lost their third consecutive game, and slipped to 2½ games behind the division-leading Cubs. Matheny will face at least a fine for his ejection. Fenway continues to find new ways to torment the Cardinals, sending them to Pittsburgh fuming after losing a four-run lead one night and allowing an eight-run inning the night before. And while they can forget interleague play at Fenway for a few years, a more immediate issue will greet them Thursday at PNC Park: Rosenthal’s health.

A trigger for all that happened in the ninth inning was a tightness Rosenthal felt in his right arm that cost him command and led to a curious drop in velocity.

Rosenthal entered the ninth with a two-run lead. Xander Bogaerts cut it to one on the second pitch of the inning. It was a 91.4-mph fastball that Bogaerts put in the seats above the Monster. Rosenthal touched 95 mph with his fastball, a pitch that usually sizzles in the high 90s and can hit 102 mph. The Cardinals are concerned that Rosenthal could have some issue near his shoulder similar to what limited him during and coming out of spring training.

“Check with the trainer, see what we’ve got to deal with,” Matheny said.

Rosenthal walked the second batter he faced to put the tying run on base, and in came lefty Zach Duke. He struck out the first batter he faced, and appeared to get a checked-swing strike from Bradley before third-base ump Vic Carapazza waved it off. Molina stalked the third-base line, shaking his head at Carapazza. The Cardinals’ dugout was not quiet. Duke would walk Bradley, nudge the tying run to second, and bring Brebbia to the mound. Like Duke, he retired the first batter he faced, but not before Segal called “time out.”

The Cardinals wanted Brebbia to hold the pitch an uncomfortable amount of time. It’s a way to control the running game and disarm the batter.

“If you can throw it right before (the batter) calls time — the longer that he holds the ball the better,” Matheny said. “That’s an advantage for us. That’s the play we’re trying to do. The umpire doesn’t need to have a break. First I’ve ever heard of it. That’s what pushed me over the edge.”

The inning, the moment, the opponent, the call — all ignited an anger from the Cardinals that had been percolating from their dugout throughout the game. Lance Lynn and Molina grumbled often at Segal and his strike zone. At times, Boston players appeared unsure about pitches. Several times the body language of all the players said strike, and the ump said ball.

Lynn thought he had the final out of the fifth inning on his 82nd pitch, but a challenge from Boston proved otherwise. The Red Sox had already cut the Cardinals’ four-run lead down to 4-2, and now along with the strike zone had a chance to inflate Lynn’s pitch count. A review of the groundout showed that Matt Carpenter’s foot was not on first base before Betts’, and that prolonged the inning. It took Lynn another seven pitches to get the out, and that put him at 100 as the trouble started in the sixth. Molina and Matheny both visited him on the mound to check on a blister he had, but Lynn remained in the game.

He got ahead 0-2 before giving a walk to Mitch Moreland and putting the tying run on base. He got behind 2-0 before getting the double play that ended the inning and his quality start.

“He was frustrated with the zone all day long,” Matheny said. “Not blatant misses, but enough quality pitches at the bottom of the zone. Those are pitches we need to get.”

The runs the Cardinals had all came in the second. Molina opened the inning with a double and rookie Luke Voit extended it with an RBI double. Carpenter drove home the fourth run with an RBI single, and an error allowed him to reach third with the potential fifth run. Tommy Pham lined a ball to center and Carpenter got caught in between. He was running on contact — but Pham’s liner was high enough that it might be caught. When it fell for a single, Carpenter raced for home and was thrown out. The Cardinals’ lead froze at 4-0.

Like the calls in the ninth, it proved not to be enough.

By then, the Cardinals had had enough.

The Cardinals didn’t lose Wednesday night because of plate umpire Chris Segal. Let’s make that clear right away, but Segal was an embarrassment to his profession and Major League Baseball.

Closer has right elbow irritation. Weaver's promotion is his third since early July.

Hochman: Another brutal Cards loss — but give assist to ump

This’ll be the one.

While Zach Duke’s recovery from elbow surgery has been nothing short of a revelation for a Cardinals team looking for a lefty like him, there …

The Cardinals will play three games in Pittsburgh and one at the Little League World Series in Williamsport against the division rival Pirates.

Boston's Jackie Bradley Jr. slides home with the winning run as the relay throw gets away from St. Louis Cardinals catcher Yadier Molina in the bottom of the ninth Wednesday. The Red Sox won 5-4. (AP Photo)