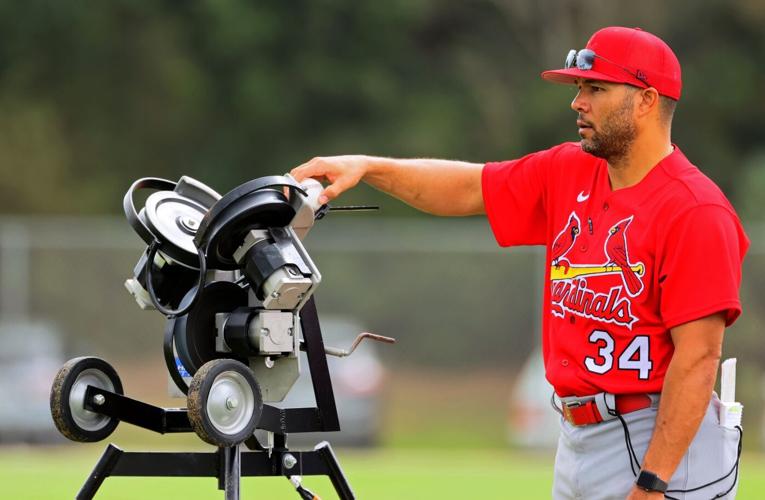 Memphis Redbirds manager Ben Johnson sends a ball through a pitching machine on Monday, March 7, 2022, the first day of Cardinals spring training at the team's training facility in Jupiter, Fla. 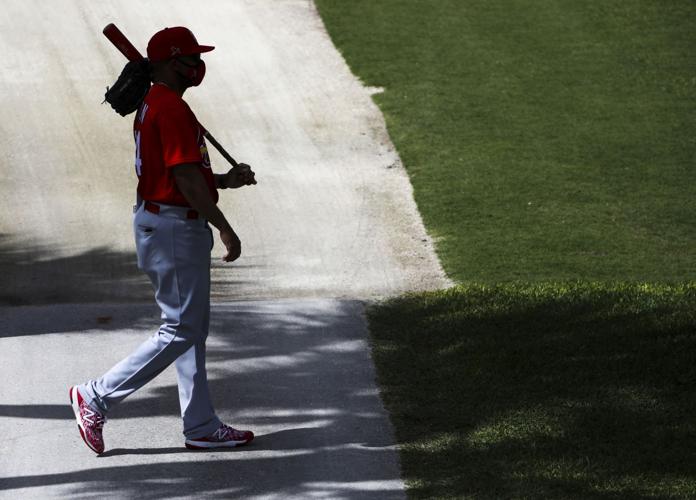 Even down in the minor leagues, at the Cardinals’ Class AAA affiliate, many of the expectations for the players by the coaching staff are similar to the sentiments echoed in the majors.

“The expectation is winning on a nightly basis,” Brendan Donovan said of his experience in Class AAA Memphis.

That benchmark is one evident early on Cardinals prospects' minor-league paths.

“That's what we strive on,” Nolan Gorman said. “That's kind of something you learn as soon as you get into this organization is that you're here to win and help the big-league team win championships.”

It’s an ideology true under manager Ben Johnson, who has led the Cardinals’ Class AAA affiliate since the start of the 2019 season. And it's an ideology that helped ease that jump from the minors to the big leagues for the 12 Memphis players who earned call-ups this past season.

“It’s really similar (in Memphis) to how things are done here,” Juan Yepez said in Spanish as he stood in the Cardinals’ clubhouse at Busch Stadium in September. “(Johnson) tries to make it as similar as possible so that when we get here we don't feel uncomfortable.”

“We're tough here,” Johnson said. “We don't really give them a whole lot of leash. And I think that that benefits them.”

When Johnson took over in Memphis, it was his first minor-league managerial job. It brought Johnson back into the organization that drafted him in 1999 and back to his hometown. In three seasons since taking over, Johnson has led Memphis to a 199-211 record. The Redbirds went 73-77 this past season and failed to earn a playoff spot for the third consecutive season.

But what Memphis did have was a dozen of its players make their MLB debuts, some of whom made big impacts for the Cardinals following their call-ups.

For Donovan, that impact led to a third-place finish in National League Rookie of the Year voting and the NL utility Gold Glove — the first such award of its kind and the first Gold Glove won by a Cardinals rookie after he was called up at the end of April. Left-hander Zack Thompson, who was called up in June, had an impact in the form of a bullpen role for manager Oliver Marmol and a spot on the club’s playoff roster after he held a 2.08 ERA over 34⅔ innings.

“It really set us up for success once we got here,” Thompson said of Johnson’s big-league expectations in the minor leagues. “Prepared us for what it was going to be like with the coaching staff with Oli, and he just did a great job of getting us ready for that.”

Others, like Gorman, who ended the season back in the minors, and Juan Yepez produced double-digit home run seasons — enough to put them both within the top 15 rookie sluggers in MLB.

“I definitely feel pride, and it's not just because I've coached them,” Johnson said of the players on his Memphis roster who received call-ups. “We all care for each other here. We're a family here. I know their parents are proud of them, I know their grandmas are proud of them and we feel that as well. You know, we put our blood, sweat and tears into it, too. And we lose sleep over these guys. So when they do go up and play well, we really feel good about it, and we get excited about it.”

The familial feeling Johnson describes is one that was paired with the expectation to perform at a high level considering the environment those promoted prospects were entering.

“I feel like it's not so much like treating us like minor-leaguers,” said Alec Burleson, who was called up in September after batting .331 with a .904 OPS and 20 home runs in Class AAA. “(Johnson) is treating us as big-leaguers and just preparing us for when we get up here so that, you know, it's just like you're playing in the minors, just on a bigger stage.”

For an outfielder like Burleson, that included accountability Johnson expected in Memphis, including making the most of batting practice and working on approach in the box or being meticulous with fielding work in getting reads on balls and throws in — things the left-handed-swinging outfielder said were minor but made him feel prepared upon arriving in the majors.

“He runs it runs like a big-league club,” Burleson said of the Memphis culture.

The culture is one that even extended off the field to make sure players are prepared when it comes to often-overlooked things like travel.

“He’s is a manager who helps you, who likes to help you,” Ivan Herrera, who made his MLB debut in May, said in Spanish . “I feel like he does a good job helping the rookies and implementing more than just what playing at the level of the major leagues is like.”

Described as a “player-first guy,” Johnson’s efforts to work with each individual is something Gorman described as “special.” The fact that the 41-year-old was able to do that with a smaller staff around him made him that much more appreciated by his players.

“We've had to pick up slack in certain areas,” said Matthew Liberatore, who made his MLB debut in May. “And (Johnson’s) been really invaluable in making himself available for whatever guys need.”

Memphis Redbirds manager Ben Johnson sends a ball through a pitching machine on Monday, March 7, 2022, the first day of Cardinals spring training at the team's training facility in Jupiter, Fla.