Bernie: Villanueva a plus in long relief
0 comments
Share this
{{featured_button_text}}
1 of 2 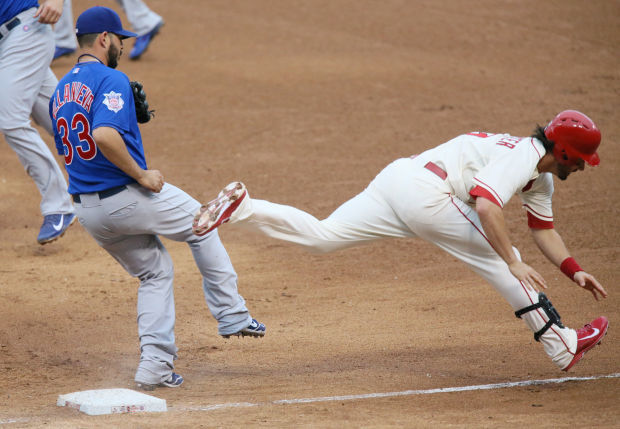 Matt Carpenter of the Cardinals clumsily crosses paths with Cubs pitcher Carlos Villanueva as he runs out a ground ball during a game late in the 2013 season. (Photo by Chris Lee, clee@post-dispatch.com) 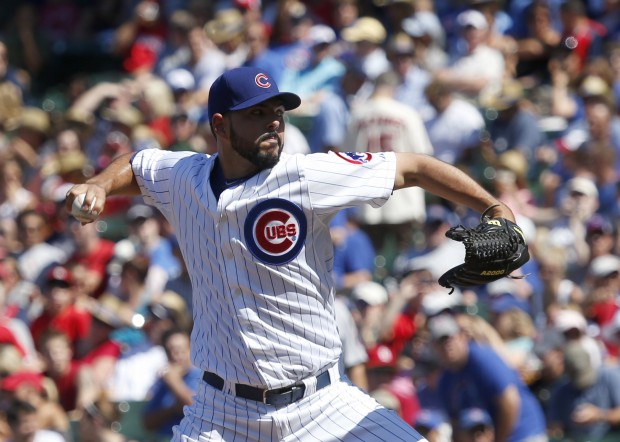 Good afternoon to the BFIB.

Notes on my scorecard:

1. I like the Cardinals' low-key but potentially valuable signing of RH pitcher Carlos Villanueva to a minor-league contract _ with a chance to make the big club in spring training. This has little to do with Villanuena being able to step into the rotation in an as-needed basis.

So the idea that Villanueva could come to the rescue and effectively fill long-term a rotation void in the aftermath of a calamitous event ... forget about it. He's not what you would want or need for that role.

Villanueva has been a much better reliever than starter in the majors. His relief stats are superior to his starter stats in essential categories including ERA (3.55), HR rate (0.98), WHIP (1.21), and strikeout rate (9.1 per 9 IP).

And Villanueva's career numbers against RH batters and LH batters are pretty much the same. The numbers aren't superhuman or anything -- a .745 OPS allowed to LH batters, compared to a .732 OPS allowed to RH batters. But the point is, Villanueva isn't a platoon-split liability. And that means manager Mike Matheny can use him against LH hitters without stressing over it.

But I believe Villanueva can best serve the Cardinals in a long-relief role.

Villanueva has made 314 relief appearances in his MLB career and has gone more than one inning 125 times. That includes 95 appearances of 2+ innings.

In relief stints of 1+ innings, Villanueva has a 2.02 ERA with a healthy strikeout rate of just under nine per 9 IP.

Having a rubber-armed pitcher capable of giving the Cardinals two or more innings of solid relief per outing is a plus. Carlos Martinez has been cast as the No. 5 starter and is unlikely to supply a ton of innings. The same would be true of young LH Marco Gonzales if Gonzales was asked to start. That's where Villanueva comes in; if innings from the starters are an issue, he can back up Martinez (or Gonzales) and get the Cardinals into the seventh or eighth inning.

So Villanueva would fill a useful role, being a "bridge" pitcher that leads to the late innings at a time when Martinez and/or Gonzales are learning how to go deeper into starts.

2. Another potential plus about Villanueva, with a hat tip to Post-Dispatch sports columnist Joe Strauss, who the other day mentioned something I hadn't thought about: Villanueva could be a good mentor for Martinez. Villanueva, like Martinez, is a native of the Dominican Republic. And Villanueva has been around a long time after breaking into the majors as a 22-year-old in 2006. He is said to be a good fellow and a good teammate. If that's the case, Martinez would have someone to lean on for advice.

3. I don't know what the deal is on this, but MLB hitters sure have punished Villanueva's changeup through the years. According to the data at Brooks Baseball, Villanueva has given up 74 homers over the past six seasons ... and 31 of the 74 have been on changeups. That's a huge HR percentage for a pitcher who throws five different kind of pitches: four-seam fastball, sinker, curve, slider and change. Maybe Villanueva is using the changeup too often, or in the wrong situation. Maybe he's tipping the pitch. And perhaps Cardinals pitching coach Derek Lilliquist and catcher Yadier Molina can help Villanueva enhance a pitch that's clearly been a weakness.

4. The 1987 World Series, Cardinals and Twins, the unusually high noise level at the Metrodome in Minneapolis, the site of Games 1, 2, 6, and 7. Broadcaster Al Michaels, then of ABC, is convinced the Twins were pumping in fake crowd noise. You can read about it here, and, no, Bill Belichick had nothing to do with it.

5. The Chicago Cubs are said to be exploring the possibility of signing free-agent starting pitcher James Shields. Here's the link. I have no idea what to make the the Shields rumors, but the Cubs already have a good rotation after signing free-agent Jon Lester. Either way, the NL Central race should be very interesting this season.

Strauss: Sense of intrigue with Cardinals

Cubs' aggressive winter and Pirates' back-to-back trips to the postseason feed the uncertainty about the Cardinals.

Bernie: NL Central will be a dogfight

It’s a fascinating division: You have the reigning power in St. Louis, the new darlings in Chicago, a talented and stubborn foe in Pittsburgh.

Contract gives Jay a sense of security he was missing.

Villanueva to wear 'many hats' for one open job

Tempted to escape NL Central, veteran reliever and starter stayed when Cardinals offered him a chance to win a spot in their bullpen.

Pitcher and ex-Cub has minor league deal but gets invitation to major league camp.

While focus is on the salary for pitcher Shields and the dizzying bids for young Moncada, there are fee factors beneath the surface for both.

Former Orioles backstop and his 6-foot-5 frame once rose to the heights of a lofty prospect ranking.

Matt Carpenter of the Cardinals clumsily crosses paths with Cubs pitcher Carlos Villanueva as he runs out a ground ball during a game late in the 2013 season. (Photo by Chris Lee, clee@post-dispatch.com)