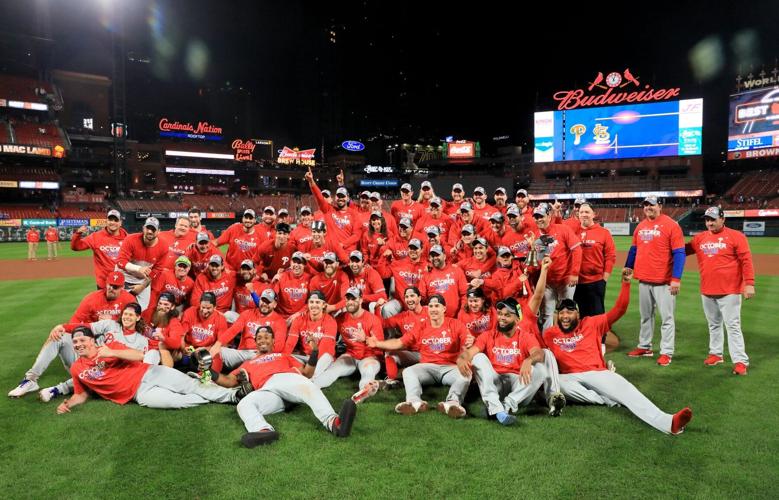 The Philadelphia Phillies pose for team picture after beating the Cardinals 2-0 on Saturday, Oct. 8, 2022, at Busch Stadium to sweep a best-of-three National League wild-card playoff series. 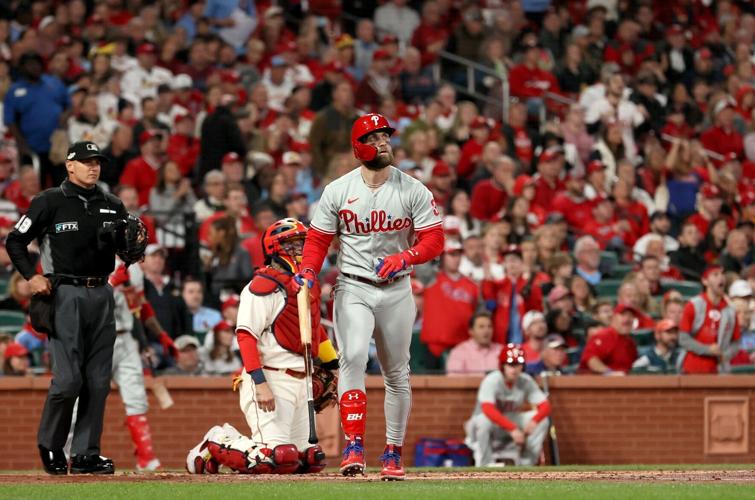 Philadelphia designated hitter Bryce Harper watches the ball he hit in the second inning soar for a home run in Game 2 of a National League wild-card playoff series against the Cardinals on Saturday, Oct. 8, 2022, at Busch Stadium. 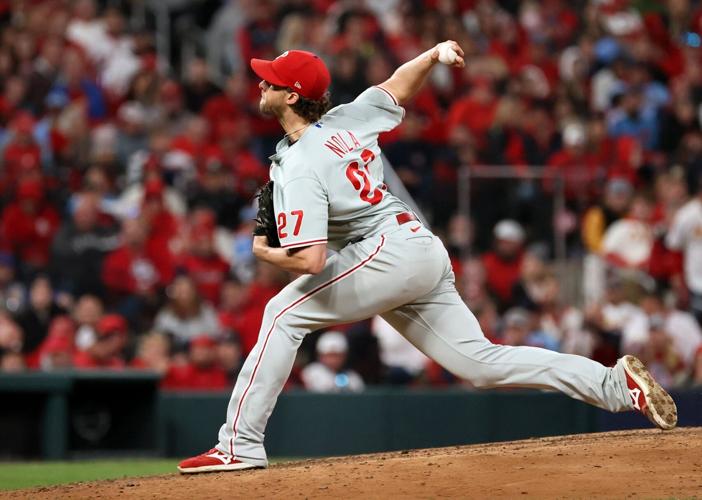 Philadelphia's Aaron Nola pitches against the Cardinals in the seventh inning of Game 2 of a National League wild-card playoff series on Saturday, Oct. 8, 2022, at Busch Stadium. He did not allow a run in 6⅔ innings of work in the Phillies' series-clinching 2-0 victory. 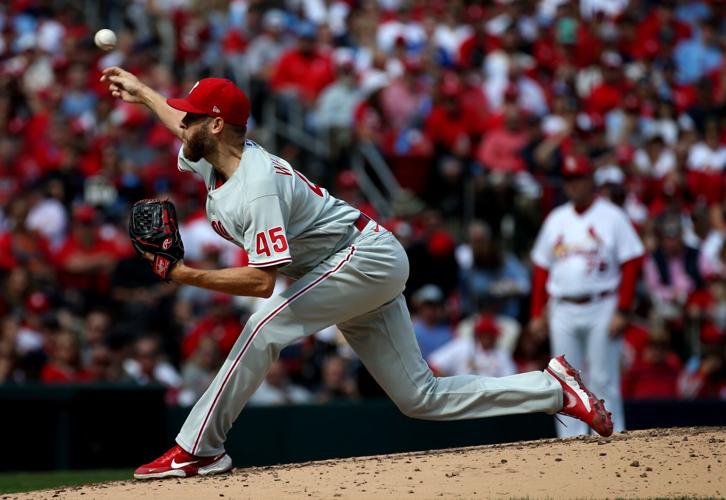 Philadelphia Phillies starting pitcher Zack Wheeler (45) goes to work in the fourth inning of game 1 of the National League Wild Card series against the St. Louis Cardinals on Friday, Oct. 7, 2022, at Busch Stadium.

Any pre-series analysis of the Cardinals’ wild-card round with the Philadelphia Phillies dealt, in large part, with starting pitching at the top of the rotation. The Phillies, in a short series, were presumed to have the edge because of right-handers Zack Wheeler and Aaron Nola.

Wheeler, who didn’t allow a run to the Cardinals in 14 regular-season innings, didn’t permit any in 6 innings in Game 1 either. Nola, 5-3 with a 2.69 career earned-run average against the Cardinals, was scoreless for 6w innings on Saturday night in the clinching Game 2, a 2-0 Phillies victory.

But the Cardinals figured to make that ground up with a deeper bullpen and on defense. And while they played more solidly in the field on Saturday than they did on Friday, especially when they rubbed out two Phillies runners in the sixth inning as the Phils were a little too aggressive, the Phillies played the better brand of defense.

Cardinals Gold Glovers Tommy Edman and Nolan Arenado both got caught in- between Friday on plays they normally make in the six-run ninth inning for the Phillies. Meanwhile, Phils third baseman Alec Bohm played the position like Arenado.

The Phillies’ reconfigured bullpen was not an issue and, in fact, the Philadelphia relievers outpitched a compromised Ryan Helsley, an All-Star, in Game 1 and held on for the final 2⅓ innings on Saturday.

Besides the Cardinals giving up all those runs in the ninth on Friday, Giovanny Gallegos walked No. 8 hitter Bryson Stott in the eighth while protecting a two-run lead, forcing manager Oliver Marmol to go to Helsley for a five-out save.

Jordan Montgomery, normally a starter, then walked ninth-place hitter Stott on Saturday to load the bases and set up an insurance run in the Phillies’ fifth.

“Their defense played well,” Marmol said. “And their bullpen was good enough.

“We had a tough time scoring runs. Need runs to win.”

There were two particular, non-offensive instances that stood out.

One came in the first inning Saturday when leadoff man Lars Nootbaar singled to right center and took second when center fielder Brandon Marsh committed the Phillies’ only misplay of the series.

Nootbaar didn’t expect to be at second very long. But he died there as Albert Pujols and Paul Goldschmidt struck out and Arenado flied to reasonably deep right.

By scoring early, Nootbaar said, “we would be putting some pressure on them, making them work a little bit harder.”

Arenado said, “I hit that ball pretty well to right. I wish I had stayed on top of it a little bit more. It would have been better if we had scored first.”

And not just from a scoreboard standpoint.

“It would have had a different feel,” Marmol said.

In the sixth inning on Friday when the game still was scoreless, Edman singled and Nootbaar walked. But Pujols grounded into a double play and Goldschmidt grounded out.

“That was the difference for me,” Marmol said. “It was the inability to cash in on some of those. It just changes the overall vibe and confidence level.”

Arenado, turning again to how the Phillies’ starters dominated the Cardinals, said, “It doesn’t feel good right now. But those guys are good. They made good pitches. And they had better at-bats than we did. We just didn’t play good enough.”

The only Cardinal who had had any previous success of note against Wheeler and Nola was struggling shortstop Paul DeJong, who hit himself out of the lineup in the final month of the season. He had a .444 batting average and two homers off Wheeler — the only homers off him by a current Cardinals player — and a homer off Nola.

Referring to his hold over Wheeler, DeJong said, “That was ancient history, 2017. But it would have been nice to be in there.”

The Cardinals’ seventh-place hitters — Corey Dickerson, rookie Juan Yepez and rookie Nolan Gorman — had four of the Cardinals’ 12 hits for the series and Yepez, who played right field on Saturday, had another hit as the sixth-place batter. The Cardinals had one extra-base hit, Yepez’s two-run pinch homer on Friday.

“I think Atlanta is the best team we’ve faced all year,” Marmol said. “I felt that if we could get through this series and get through Atlanta, we’d have been in good shape.”

The Cardinals had a 93-win regular season and coasted to the National League Central Division title abetted by a huge August in which they were 22-7. They spent the final couple of weeks trying to find the right fit for October, with injury considerations involved, too.

Two-time Gold Glover Tyler O’Neill, off and on as a slugger this year because of a myriad of injuries, the latest a hamstring injury, wasn’t on the postseason club and Marmol lamented that O’Neill could have made a difference.

Then, closer Helsley jammed the middle finger of his right hand into the ground while making a fielding play in the next-to-last regular-season game, in Pittsburgh, and was on the postseason roster but didn’t have a feel for his pitches.

“That would have been really neat,” to have had the Helsley pitching like he did in the first 26 weeks of the season, Marmol said.

Mozeliak said, “You always think about building rosters to get you to postseason and then you hope have the right roster for postseason.

“Unfortunately, in a short series, it really just depends on who’s hot and what’s clicking. (Friday) was a tough loss. Historically, we win that game, having a two-run lead going into the ninth.

“Still, it was a memorable year in so many ways. There’s a lot to be proud of. Clearly, we go back to the drawing board as we do every off-season.”

Wainwright would have started

Had there been a third game on Sunday night, the Busch Stadium fans would have seen one more veteran star in action in addition to future Hall of Famer Pujols, who finished his career with two hits and future Hall of Famer Molina, who singled in his final at-bat in the ninth inning.

Adam Wainwright, who had pitched well against the Phillies this season, was going to start the game, backed up by Jack Flaherty.

“They were going to split that game,” Marmol said.

“If he was starting, he was going nine,” said Flaherty, sitting next to Wainwright. “There was no second guy.”

Wainwright, playing along, said, “If I started it, he wasn’t going to be pitching.”

Wainwright, who might not by retiring, would have been pitching to Molina, of course, his fellow record-setting battery mate.

But the 19-year veteran Molina, who was not the same player this year as time had taken its toll, showed his postseason mettle by collecting his National League record 102nd hit, singling on an 0-2 count with two out in the ninth.

“I haven’t had a base hit in the last two weeks,” said Molina, smiling, “and just to help the team to stay alive made me feel good and to give Tommy a chance to win the game.”

As he did for Pujols in the eighth, Marmol sent out a pinch-runner for Molina in the ninth.

“For them to get pinch-run for the right reasons and to come off the field and get an ovation was pretty special,” Marmol said.

The manager said he had no intention having Gorman, more of a home-run threat, pinch-hit for Molina in the ninth.

As he made his way through well-wishers after the game, Molina said, “It (stinks) to be here saying good-bye. I want to be here for longer.”

Molina’s next baseball job will be as a manager in winter ball in Venezuela and then next March he will manage the Puerto Rican club in the World Baseball Classic.

In the previous four WBC Classics, he played. But he will not be a player-manager.

Photos: End of an era, as Cards swept by Phillies in Wild Card playoff series

Under interim manage Rob Thomson, the Phillies swept the Cardinals in the National League Wild Card.

The Philadelphia Phillies pose for team picture after beating the Cardinals 2-0 on Saturday, Oct. 8, 2022, at Busch Stadium to sweep a best-of-three National League wild-card playoff series.

Philadelphia designated hitter Bryce Harper watches the ball he hit in the second inning soar for a home run in Game 2 of a National League wild-card playoff series against the Cardinals on Saturday, Oct. 8, 2022, at Busch Stadium.

Philadelphia's Aaron Nola pitches against the Cardinals in the seventh inning of Game 2 of a National League wild-card playoff series on Saturday, Oct. 8, 2022, at Busch Stadium. He did not allow a run in 6⅔ innings of work in the Phillies' series-clinching 2-0 victory.

Philadelphia Phillies starting pitcher Zack Wheeler (45) goes to work in the fourth inning of game 1 of the National League Wild Card series against the St. Louis Cardinals on Friday, Oct. 7, 2022, at Busch Stadium.