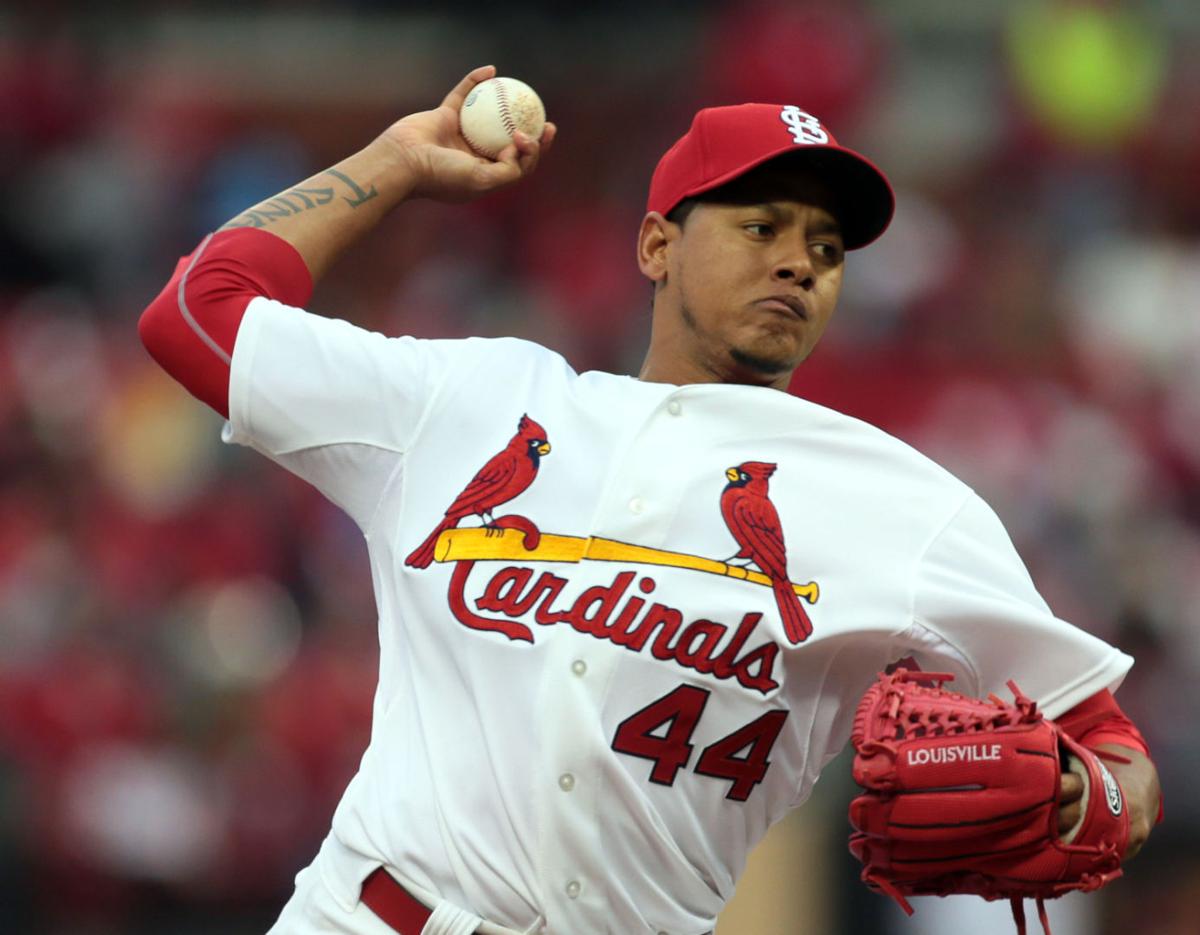 Carlos Martinez made three abbreviated starts in the Dominican winter league and walked no batters while striking out 12 in 12-plus innings. (Photo by Laurie Skrivan, lskrivan@post-dispatch.com) 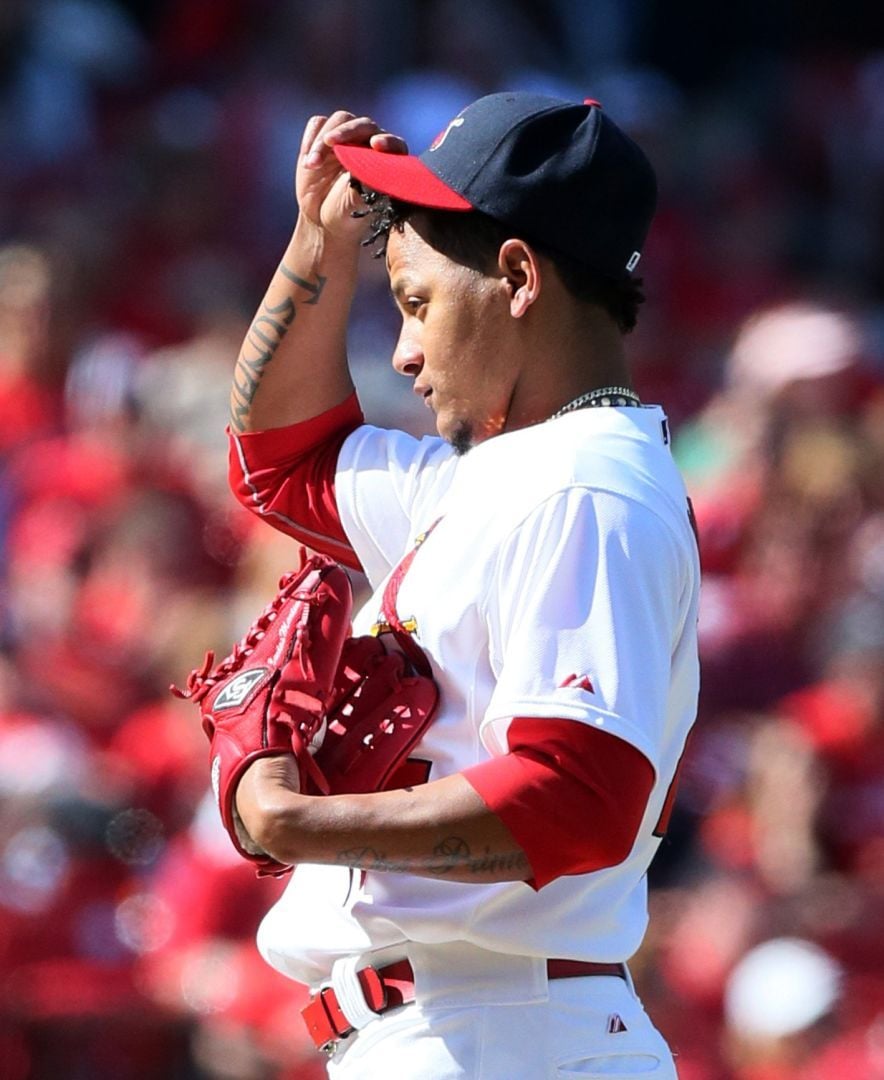 St. Louis Cardinals pitcher Carlos Martinez reacts after his wild pitch allowed the go-ahead run to score in the ninth inning during a game between the St. Louis Cardinals and the Atlanta Braves on Sunday, May 18, 2014, at Busch Stadium in St. Louis. Photo by Chris Lee, clee@post-dispatch.com

SAN DIEGO • Carlos Martinez, who had approached the Cardinals with an idea to honor his close friend Oscar Taveras, has received permission from the team to wear No. 18 for the 2015 season.

Cardinals general manager John Mozeliak notified Martinez's representatives today about the number, and it's possible that Martinez could wear the number for the remainder of his career with the Cardinals. That is something that he has requested, and depending on what the team chooses to do to memorialize Taveras he may get that chance.

Martinez will get the number he has requested and is set to get the role that he's coveted too. Martinez is throwing well in the Dominican Republic. Mozeliak said the stats that the righthander has posted shows that he's "pitching with a purpose."

Taveras was killed in a car accident shortly after the Cardinals' season ended. Martinez and Taveras grew up nearby each other in the Dominican Republic, and they grew up together as professional players as two of the top prospects in the Cardinals organization for the past four years.

Also during his meeting with the media tonight, Mozeliak:

• Reaffirmed that the team is comfortable with its starting pitching, and while not going into any specifics outlined how unlikely it is that the Cardinals will enter into the bidding for the top tier starting pitchers.

• Said he's likely to see what pitchers are available in January.

• Allowed that he's no longer looking for a backup catcher because the targeted catchers felt they could get more playing time elsewhere. Tony Cruz will return to the team as the backup catcher, a reality signaled by the team tendering him a contract.

• Said that a righthanded bat for the bench remains the target.

• Outlined how he'll have more meetings here in San Diego with agents than other teams. The trade market isn't likely to be where the Cardinals find their final needs.

• Said that Michael Wacha has changed his offseason conditioning work as a result of the stress reaction that put him on the disabled list this past season. He is, for example, lifting with less weight and doing less weight over his head as a way to avoid the overuse injury.

There will be more on Max Scherzer, Ned Yost, Martinez and many more nuggets coming shortly for tomorrow's Post-Dispatch.

Chairman of the Cardinals outlines how young outfielder will be memorialized. Also says it's "important" St. Louis keeps the NFL.

Goold: A modest proposal to improve Hall of Fame voting

A backlog of PED-laced players and an archaic rule have made voting for Cooperstown difficult. Here's one way to fix that.

Matheny will give his No. 22 to Heyward

Matt Belisle's durability is virtually unmatched by other MLB relievers in recent seasons, but he experienced some slippage in 2014.

Martinez will get a shot as a starter

Cardinals not expected to do much at winter meetings

Mozeliak's assessment of current roster: ‘The Cardinals are in a pretty good spot.’

Carlos Martinez made three abbreviated starts in the Dominican winter league and walked no batters while striking out 12 in 12-plus innings. (Photo by Laurie Skrivan, lskrivan@post-dispatch.com)

St. Louis Cardinals pitcher Carlos Martinez reacts after his wild pitch allowed the go-ahead run to score in the ninth inning during a game between the St. Louis Cardinals and the Atlanta Braves on Sunday, May 18, 2014, at Busch Stadium in St. Louis. Photo by Chris Lee, clee@post-dispatch.com