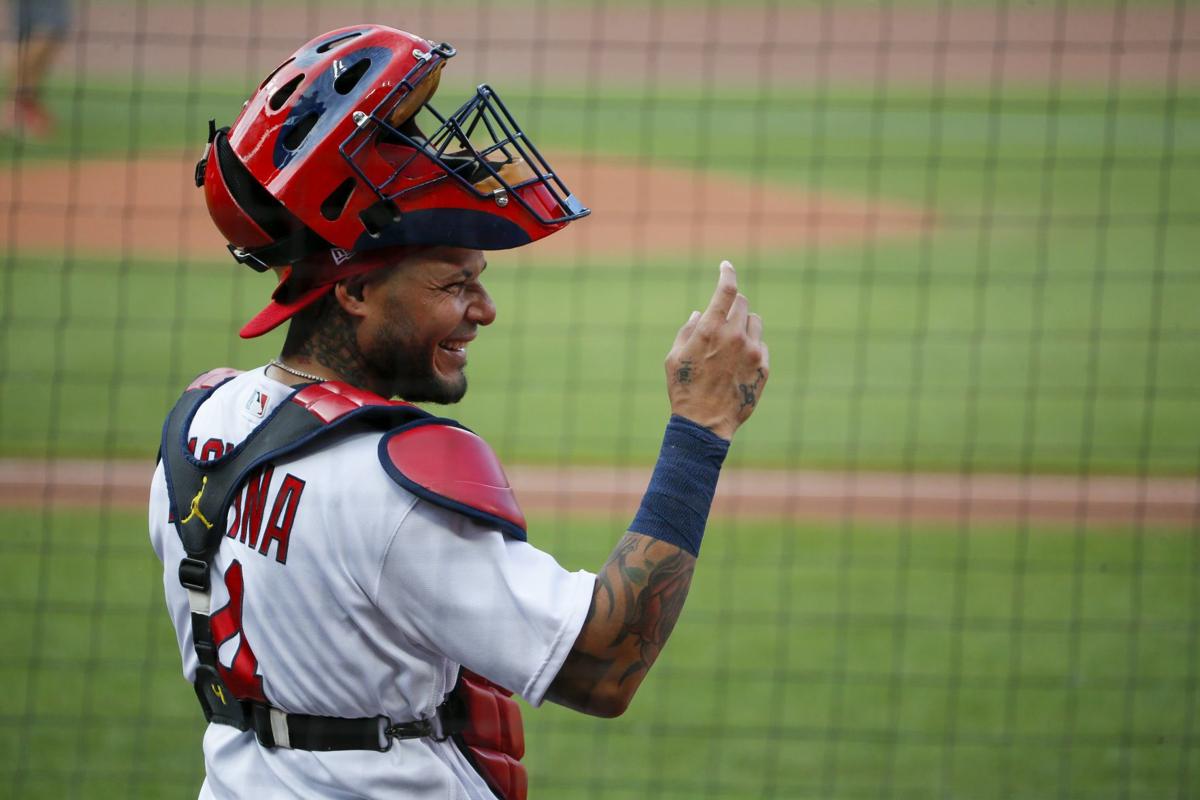 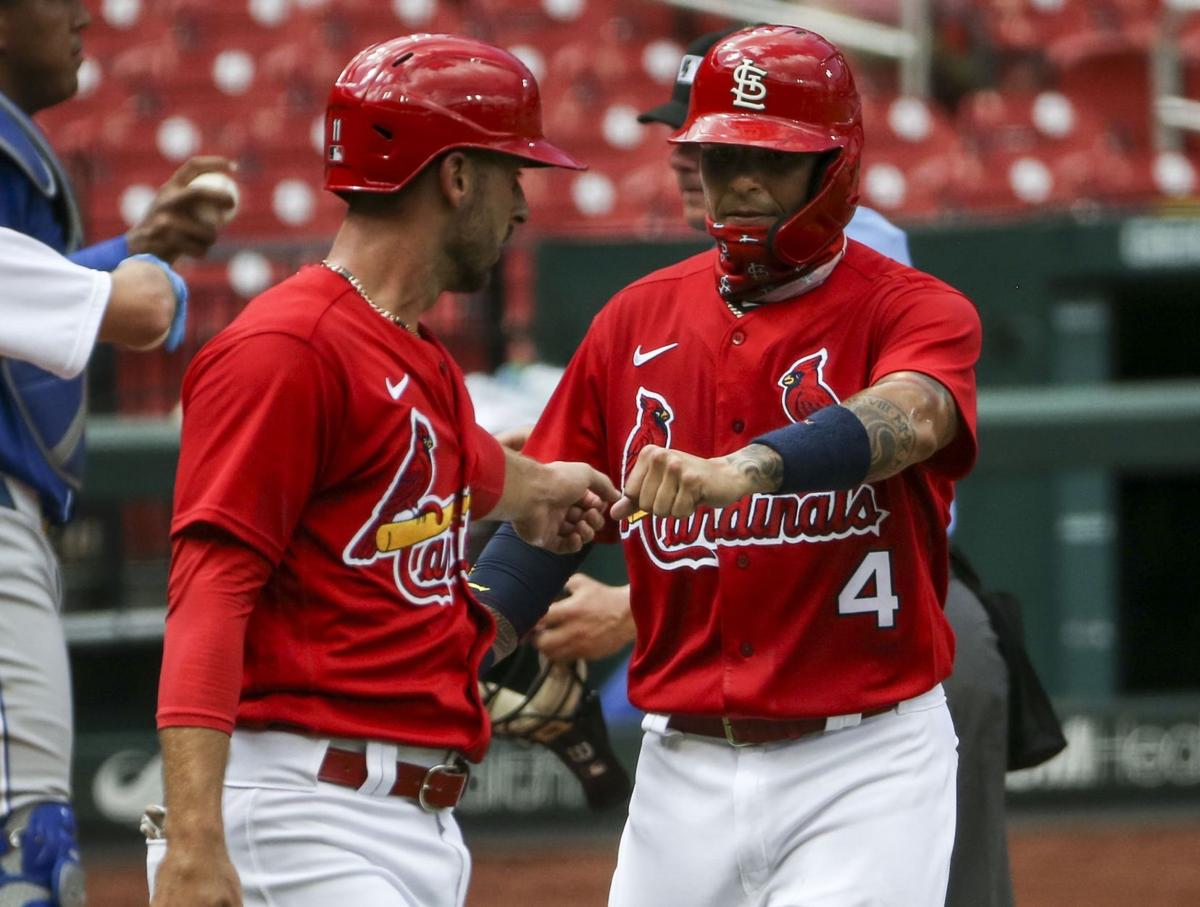 St. Louis Cardinals catcher Yadier Molina (4) and shortstop Paul DeJong (11) bump fists after scoring on as RBI in the second inning of an exhibition baseball game at Busch Stadium in St. Louis on Wednesday, July 22, 2020. Photo by Colter Peterson, cpeterson@post-dispatch.com

MILWAUKEE — In a social media post on Instagram, Cardinals catcher Yadier Molina said he was "saddened" to reveal that he was one of the seven players who tested positive for COVID-19.

Through the team, five of his teammates also revealed that they had positive tests for COVID-19: All-Star shortstop Paul DeJong, relievers Junior Fernandez and Kodi Whitley, infielder Edmundo Sosa, and corner infielder Rangel Ravelo. All but Ravelo were placed on the injured list, which is not the normal 10-day or 45-day variety for actual injuries.

"I am saddened to test positive for COVID-19 even after continuing with the recommended prevention measures," Molina wrote in Spanish on a post that came accompanied with a photo of him walking onto the field carrying his catching gear. His message continued, in Spanish: "I will do everything in my power to return as soon as possible for the Cardinals fans, the city of St. Louis, and my teammates."

DeJong issued a statement, through the team: “I am disappointed to share that I have tested positive for the COVID-19 virus, even though I followed team protocols. I will approach my healing as I do all other things in my life – with education, commitment, and persistence. I look forward to re-joining the team soon and ask that you respect my privacy at this time.”

The Cardinals had 13 members of the traveling party test positive for COVID-19. All 13 have returned to their St. Louis-area homes.

One player declined to be identified by the team and also has not responded to requests for confirmation by a reporter. But the Cardinals did announce they had placed righthander Carlos Martinez on the injured list.

In a release, the club also said further roster changes would occur once the team is cleared to resume play here on Friday against the Chicago Cubs and additions to the Cardinals' 60-man player pool would be made as players complete their in-take testing.

Eight of the 13 who tested positive had symptoms of the virus that ranged from coughs and headaches or low-grade fevers. The individuals with symptoms were not identified.

The remainder of the team stayed in quarantine in their downtown Milwaukee hotel. They have a scheduled flight home to St. Louis on Wednesday, but they must clear two consecutive days without another positive test before they are cleared for travel.

On Tuesday, the team learned, via an official, that they had cleared one day without a new positive test, putting them closer to leaving isolation.

The Cardinals had one new positive test in the 24 hours before Monday, and the other positive tests were confirmed from the weekend spike in those results.

Players have the right to exercise their medical privacy and decline to be identified as having tested positive.

Six members of the team's staff also tested positive for the virus over the past weekend. Media relations director Brian Bartow confirmed his positive test in a text to the media.

Each player who tested positive will be out for at least eight days since their most recent positive test. To return to the team and the field, players must have consecutive negative tests — including a confirmation test from MLB's lab — and they must be taken 24 hours apart. That begins the reentry process that also requires a player be symptom-free, go at least 72 hours without a fever, and pass a series of other exams, including an antibody test and a cardiac evaluation.

The injury list for COVID-19 does not have a minimum number of days, so players are eligible to come off of it when they are cleared by protocols.

The positive tests leave the Cardinals without their cleanup hitter DeJong and their bedrock Molina. Whitley made his major-league debut this season and had worked his way toward high-leverage assignments in the coming games.

Cardinals believe a member of their traveling party had contact with an asymptomatic individual outside of the team that 'brought the virus into our clubhouse.'

Redbirds look for direction, hope to travel from Milwaukee to Detroit on Monday.

Series with Tigers postponed. Tentative plan is to resume play Friday at home against Cubs.

St. Louis Cardinals catcher Yadier Molina (4) and shortstop Paul DeJong (11) bump fists after scoring on as RBI in the second inning of an exhibition baseball game at Busch Stadium in St. Louis on Wednesday, July 22, 2020. Photo by Colter Peterson, cpeterson@post-dispatch.com