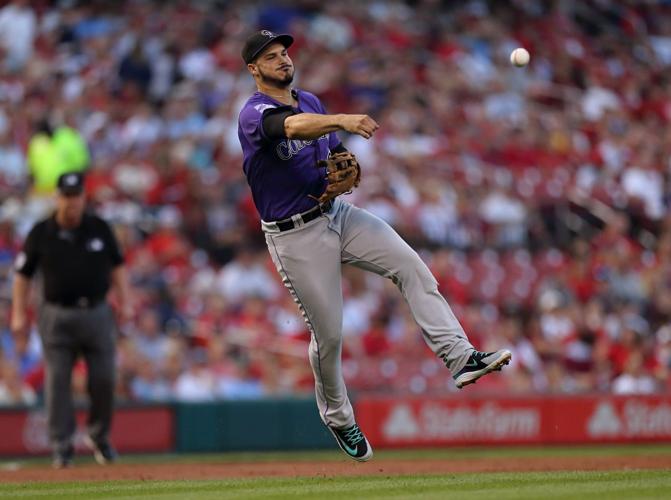 Rockies third baseman Nolan Arenado makes a play in a 2018 game against the Cardinals at Busch Stadium. (David Carson, dcarson@post-dispatch.com) 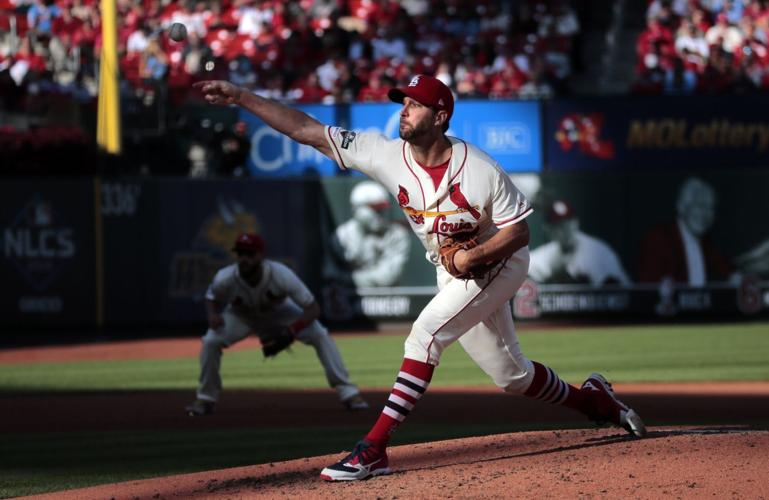 The Cardinals' Adam Wainwright pitches against the Washington Nationals in  Game 2 of the National League Championship Series at Busch Stadium on Saturday, Oct. 12, 2019. (Robert Cohen, rcohen@post-dispatch.com)

When Cardinals president of baseball operations John Mozeliak said January was the new December, he had no idea he’d try to cram a month of movement and a franchise-altering trade into its final hours.

The Cardinals finalized a contract with Adam Wainwright on Friday, neared an agreement with Yadier Molina that afternoon, and by that evening moved closer to completing an aggressive and creative trade to acquire All-Star third baseman Nolan Arenado from Colorado.

The complexities of the trade, which includes rewriting some of Arenado’s contract and salary relief Cardinals sought, could take several days to finalize. Arenado, who has been working out in Florida, has agreed to waive his no-trade clause for the Cardinals, two sources confirmed.

Another source aware of the Cardinals’ view of the deal asserted that a trade was not completed “at this time.” The amount of money involved, the money Arenado is deferring from his contract, and the rewriting of opt-out clauses all require approval from the commissioners’ office and players’ union.

The Cardinals did not say much about the deal. Their buoyancy throughout the day said it all.

“I’ve got a feeling that there’s some goodness happening here,” Wainwright said during a news conference to officially announce his return. “Yeah, that’s all I want to say. The guys who are running our organization are really, really smart businessmen, obviously. They don’t get where they are if they’re not really smart, genius business-type minds. I think there are some things they might be thinking about trying to pull of that would make people pretty happy. We’ll see.

“There’s some things I really like about our chances of winning this year,” Wainwright continued. “I wouldn’t sign back, honestly (otherwise). I would have gone somewhere else.”

The Cardinals entered the winter insisting their priority was to re-sign Wainwright and Molina and allow both “legacy” players to finish their careers together as Cardinals. Competitive offers from contending teams such as the San Diego Padres earlier this week prompted the Cardinals to improve their offer to Wainwright. He agreed to a one-year, $8-million deal that he said was for less money than two other teams offered.

When he does, it looks as if there will be a familiar face crouching behind it.

The Cardinals, a source said, expect to complete a one-year deal with Molina when he returns from the Caribbean Series in Mazatlan, Mexico. Molina, 38, has been the designated hitter for Puerto Rico’s championship team and representative in the tournament.

Wainwright, 39, said he and Molina have spoken several times a week throughout the winter. On Thursday night, shortly after agreeing to terms with the Cardinals, he spoke to Molina, who was in full catcher’s gear and standing outside a dugout.

The burst of activity from the Cardinals came after several quiet months and within a few weeks of spring training.

When they announced the deal for Wainwright, the Cardinals became the 30th and final team to make an addition to their major-league roster. They have spent the winter exploring trades that would boost their offense, and those interests inevitably bring them back to Colorado.

The Cardinals’ interest in Arenado pre-dates his eight-year, $280-million extension with the Rockies. A year ago they explored a trade for the Gold Glove dynamo as his frustrations with the team and general manager Jeff Bridich became public. The Cardinals found the Rockies’ asking price too steep and Arenado’s contract too rich and too tricky for a trade.

The Cardinals have checked back periodically, their internal fondness for the Rockies’ third baseman as obvious as their comments about him have been vague.

“There are a lot of rumors floating around the industry right now, and I imagine those things will probably continue,” Mozeliak said Friday morning. “There’s not a whole lot I can add to those other than recognize that they’re out there, and in terms of what we’re doing, where we’re going, clearly spring training is right around the corner. As I mentioned a while back, I thought January would look a more like December (normally does). You saw a lot more player movement. Certainly some of the things you would have likely seen at the end of January will now roll in February.

“Still time to improve the club. Still time to look at things,” Mozeliak said. “So, we’re going to remain open-minded and see what other things we possibly could do.”

The Cardinals have negotiated deferred money as part of the contract, and an additional year that will extend Arenado’s contract through 2027, a source described. Arenado, 29, maintains his opt-out after the 2021 season, when he can elect to be a free agent.

The Rockies’ willingness to include cash in the deal and the reworked contract moved this week’s conversations past previous stalled talks, and momentum for a deal came at the start of the week. The Athletic reported as much as $50 million would be coming from the Rockies to the Cardinals. That has to be approved by the commissioner’s office.

The Cardinals intend to cut payroll for 2021 from the planned budget for 2020, and when asked about spending Mozeliak said Friday: “I suspect it will be lower.”

The Cardinals have shaved $35.5 million from last year’s payroll through departing free agents, and they have added, before Molina, close to $9.5 million, including raises owed arbitration-eligible players.

Another hurdle the Cardinals had been trying to clear before was Arenado’s opt-out clause following the 2021 season. Their preference is to avoid bidding on free agents such as Arenado, but they were reluctant to part with prospects and have Arenado walk after a year.

The exact prospects included in the deal were not confirmed Saturday morning in part because of the approval hurdles the deal had yet to clear. The Rockies have interest in lefty Austin Gomber as part of the deal, a source confirmed. Other prospects discussed in the talks included pitcher Jake Woodford and rising, young outfielder Jhon Torres. Luken Baker had been also discussed by the two teams, according to a source.

Cardinals players, current and former, have talked to Arenado about how much he’d enjoy playing in St. Louis — and how the club fits his desire to annually contend.

During the Cardinals’ recent discussions with Molina and Wainwright, the potential addition was an added draw for their return.

Wainwright said the first few weeks of free agency were exciting as he received initial interest from contending teams. But in the middle of the winter he and Molina, along with the marketplace in general, felt conversations go quiet and the waiting begin.

“Deep down, I don’t think teams think we’re going to leave St. Louis, me and Yadi,” Wainwright said. “At first, there was this — everybody was intrigued. And then there was this period in the middle when: ‘They’re not going to leave St. Louis. Those guys are going back there.’ I think teams would be surprised at what goes through a players’ mind even as long as we’ve been there. New adventures seem fun, sometimes.

“But,” Wainwright concluded, “winning is the thing that drives you.”

BenFred: The few concerns about the Cardinals' trade for Arenado get smaller the harder you look

Will he stick around? Will he hold up? What about those home-road splits?

Righthander was the Cardinals' most reliable starter in 2020, pitching two complete games and leading the team with a 3.15 ERA in his 15th season.

Molina has decided to represent Puerto Rico in annual tournament of champions. Carlos Martinez, the Cardinals' righthander, has been named the first game starter for the Dominican Republic's team in the annual Caribbean Series.

Cardinal Nation's concerns: Molina, Wainwright and whether fans will be able to stream in 2021

In his weekly chat, Cardinals writer Derrick Goold fielded plenty of questions about the makeup of the team for 2021 and beyond, and whether f…

Arizona leaders have asked MLB to postpone Cactus League play. Cardinals have worked with St. Louis officials on a plan allowing a limited number of fans at the home opener, hope to learn from ticket sales in Jupiter.

Rockies third baseman Nolan Arenado makes a play in a 2018 game against the Cardinals at Busch Stadium. (David Carson, dcarson@post-dispatch.com)

The Cardinals' Adam Wainwright pitches against the Washington Nationals in  Game 2 of the National League Championship Series at Busch Stadium on Saturday, Oct. 12, 2019. (Robert Cohen, rcohen@post-dispatch.com)