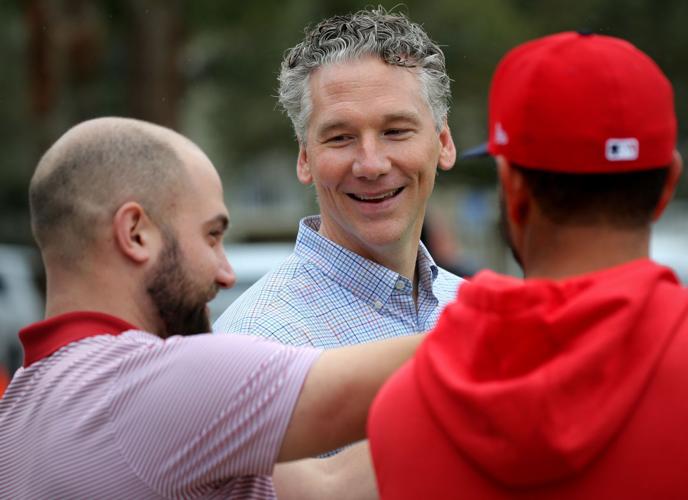 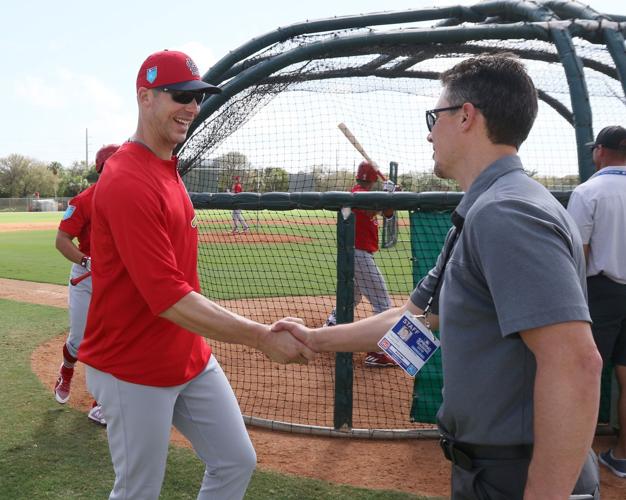 Cardinals scouting Randy Flores, right, and instructor Chris Carpenter greet each other at spring training on Feb. 21, 2018, in Jupiter, Fla.

The Cardinals started their offseason by keeping together the group that will help guide them through the discussions and acquisitions ahead.

Girsch has been the team’s general manager since 2017, and Flores has overseen some of the team’s most successful drafts since taking over with the June 2016 first-year player draft. Their contracts were set to expire in the coming weeks .

Cardinals chairman Bill DeWitt Jr. “and I are excited to know the future of the organization is in strong hands,” Mozeliak said Monday morning. “We’re glad our leadership group is intact.”

Mozeliak continues to lead the baseball operations department with Girsch as his vice president. The current front office has directed 15 consecutive winning seasons, and this year’s National League Central title was the team’s sixth in that span. When extending the contracts for Mozeliak and Girsch in 2019, DeWitt stressed the role “continuity” had played in the team’s ability to annually contend for a playoff berth while maintaining a farm system to supply talent for trades or depth.

For most teams, that positions the president of baseball operations ahead of the general manager for team decisions. The Cubs, White Sox, Dodgers, and Giants are among the teams with front office titles similar to the Cardinals, and within the division the Brewers and Reds both have president of baseball operations who also carry the title general manager.

At the trade deadline, Mozeliak lauded Girsch’s role in putting together one of the unexpected deals, landing lefty Jordan Montgomery from the New York Yankees for center fielder Harrison Bader. Montgomery, who remains under club control for the 2023 season, helped stabilize the rotation and was one of the leading pitchers in the majors during August.

Girsch recently brought a contract extension with reliever Giovanny Gallegos from conversations that started in spring to completion in the final week of the regular season.

A graduate of Notre Dame and the University of Chicago’s Booth School of Business, Girsch joined the Cardinals in 2006 and would later spend seven years as Mozeliak’s assistant general manager before a promotion to the general manager title.

Some of the analytic advancements that Girsch brought to the Cardinals are now widespread throughout the industry. His initial proposals to teams included standardizing the monetary value of players at all levels, allowing for streamline comparisons between amateurs and their expected production in the majors and major-league players production in the future. He also was a part of the Cardinals’ heavy investment in an analytics groups and expanding how they accumulated and utilized data for the draft and other decisions.

Flores has been credited with restocking the farm system and the Cardinals boast as many as six top 100 prospects, based on third-party rankings. One of Flores’ picks in the shortened 2020 draft, outfielder Alec Burleson, made his major-league debut this season. Another, first-round pick Jordan Walker, is poised to get consideration as the top prospect in all of baseball coming out of a successful Arizona Fall League campaign.

Flores returned to the organization after several years as a student and entrepreneur that included using technology that allowed coaches, families, and scouts to get video from amateur games, such as those in the Cape Cod League.

Best Podcast in Baseball: Magic season. More of the same postseason. How can Cardinals change trend?

Ten Hochman: On day of Albert Pujols ‘Lidge homer,’ five facts you may not know

In today’s 10 a.m. video, columnist Ben Hochman shares tidbits about the famous Pujols homer against the Astros on this day in 2005. Plus, a h…

Cardinals scouting Randy Flores, right, and instructor Chris Carpenter greet each other at spring training on Feb. 21, 2018, in Jupiter, Fla.