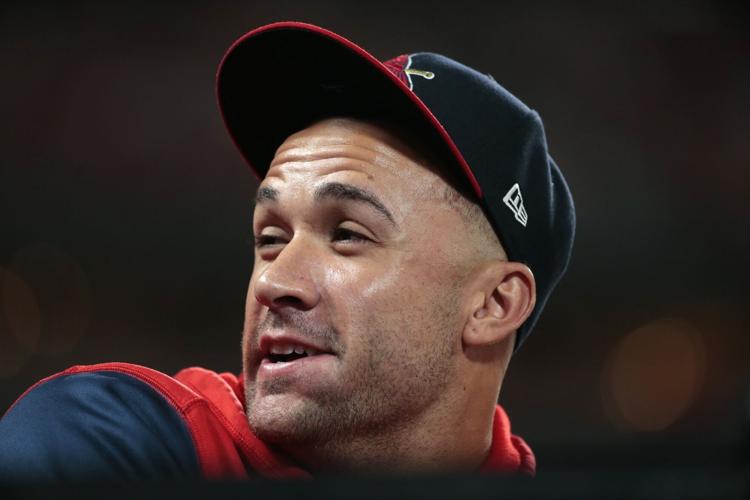 Cardinals pitcher Jack Flaherty exchanges words with a heckler in the stands during the Cardinals' game against the Braves on Sunday, Aug. 28, 2022, at Busch Stadium. 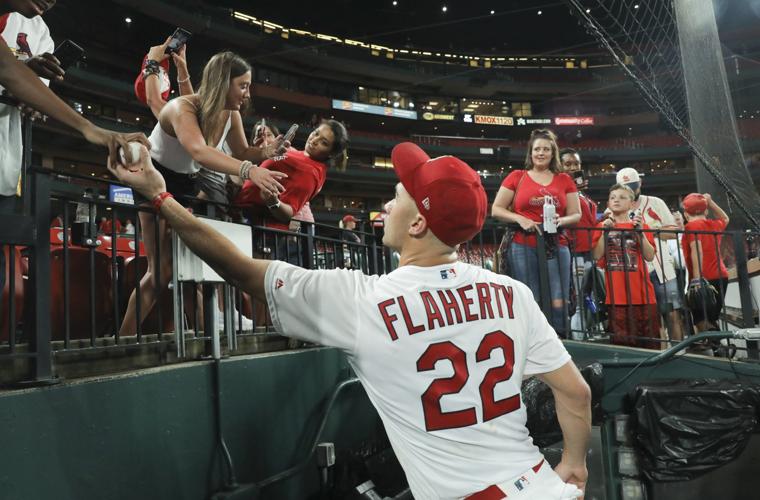 Fans pose for selfies and get autographs from Cardinals starting pitcher Jack Flaherty, who was the last player to leave the field after the Cardinals' 1-0 win over the San Francisco Giants on Sept. 3, 2019 at Busch Stadium. Photo by Laurie Skrivan, lskrivan@post-dispatch.com

In advance of Friday's deadline that send the Cardinals and a handful of players to arbitration hearings throughout spring, the club finalized contracts with two members of the rotation and continued to negotiate others with players such as Gold Glove-winners Tommy Edman and Tyler O'Neill.

Jack Flaherty and Jordan Montgomery agreed to terms on one-year contracts for the 2023 season Friday morning and avoided the need for arbitration, according to multiple sources.

Their signings started a blitz of agreements for the Cardinals that left only two arbitration-eligible players unsigned before Friday's deadline to exchange salary figures. All-Star closer Ryan Helsley and lefty Genesis Cabrera did not come to an agreement with the Cardinals and are likely headed to an arbitration hearing.

Both pitchers are in their final year of arbitration eligibility and can become free agents at season's end.

The Cardinals also finalized a one-year deal with Edman before Friday's deadline. He will make $4.2 million, and his performance this past season also earned him a bonus paid from Major League Baseball's new general fund that is allocated to top performing players before they reach arbitration.

Jordan Hicks also reached a one-year, $1.8-million agreement with the Cardinals on Friday afternoon to avoid arbitration. He, too, will be a free agent at the end of the 2023 season.

Representatives for Helsley and Carbera will present the Cardinals a salary request Friday evening and the Cardinals will counter with a salary offer. Those numbers will be public and the basis for an arbitration hearing this spring. An arbiter will choose between the two.

The Cardinals acquired Montgomery, 30, from the New York Yankees at the trade deadline, and the lefty went 6-3 with a 3.11 ERA in 11 starts with his new team. With only one starter under contract for the 2024 season, the Cardinals intend to explore extensions with at least two starters this spring, and their agreement with Montgomery on Friday does not preclude them from approaching him with a longer-term offer at any point.

Flaherty, 27, is coming back from a season he finished in the Cardinals' bullpen. The previous three seasons have been interrupted by quarantine and injuries and kept the young right-hander from building on his impressive second half in 2019.

The Cardinals have been encouraged by Flaherty's health and progress this offseason and he'll come to spring training expected to be one of the pitchers who leads the rotation.

From his home in California, Nolan Arenado says he wants to be a lifelong Cardinal

For the first time in several winters, Nolan Arenado knows for sure where he’ll spend the next several years, electing to remain with the Cardinals through at least 2027 and not opt out of his contract for a crack at free agency.

How does Cardinals Lars Nootbaar build on breakout ’22? He could start with Team Japan

Nootbaar is expected to be named soon to Japan's national team for the World Baseball Classic, joining teammate Tommy Edman in notable firsts for international tournament.

The New Year begins on the baseball beat at the St. Louis Post-Dispatch with a major acquisition -- Lynn Worthy, the former Royals beat writer for the Kansas City Star.

Cardinals pitcher Jack Flaherty exchanges words with a heckler in the stands during the Cardinals' game against the Braves on Sunday, Aug. 28, 2022, at Busch Stadium.

Fans pose for selfies and get autographs from Cardinals starting pitcher Jack Flaherty, who was the last player to leave the field after the Cardinals' 1-0 win over the San Francisco Giants on Sept. 3, 2019 at Busch Stadium. Photo by Laurie Skrivan, lskrivan@post-dispatch.com