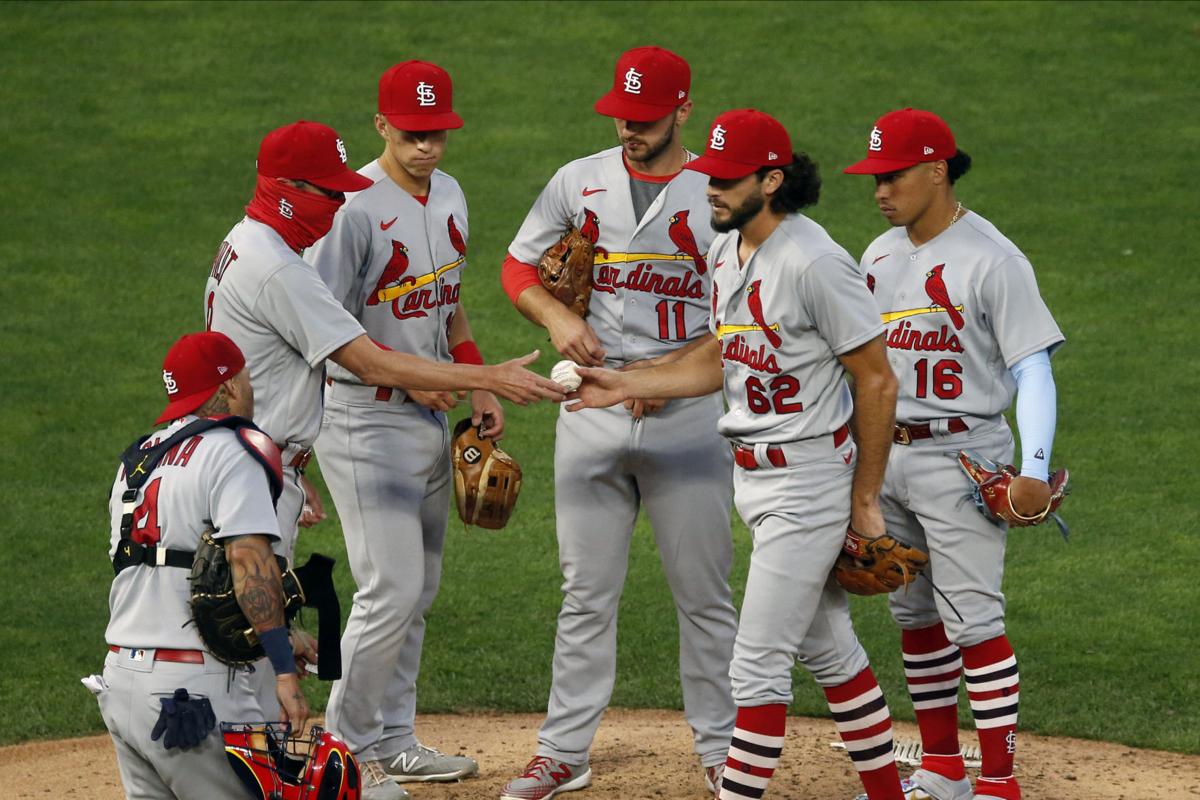 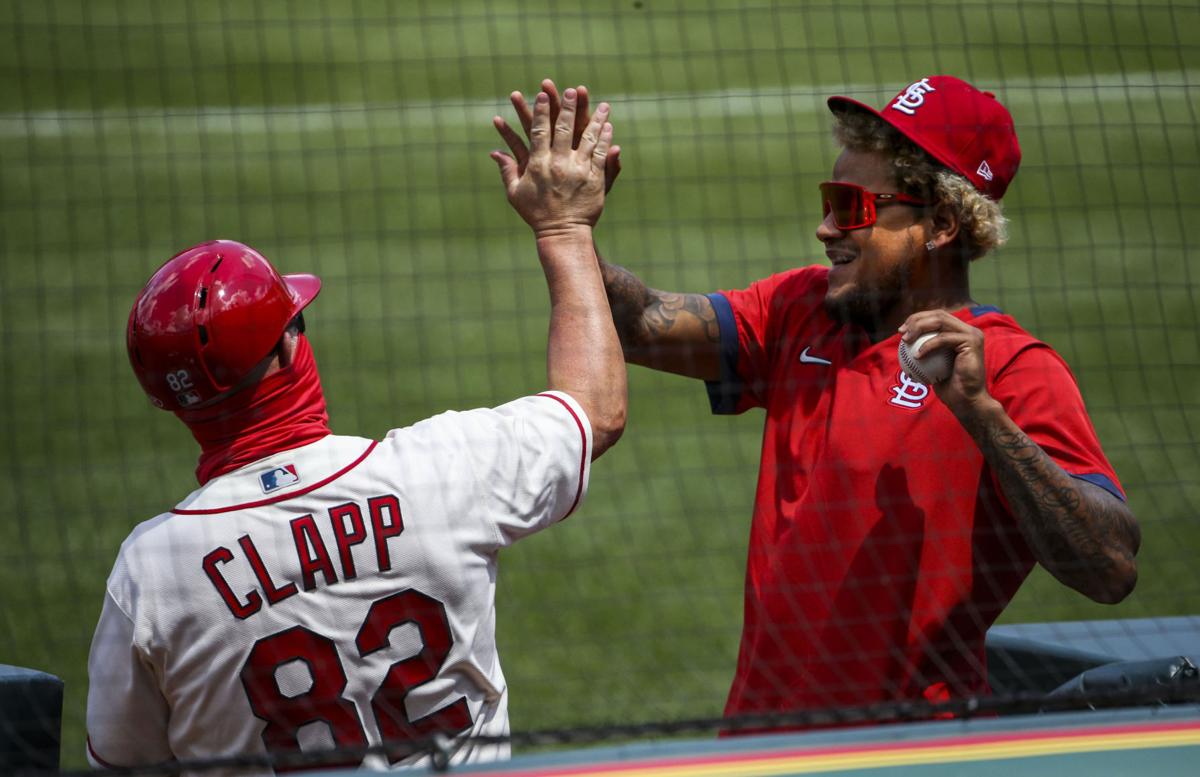 Cardinals first base coach Stubby Clapp and pitcher Carlos Martinez high five during the first inning of a game on Saturday, July 25, 2020 against Pittsburgh at Busch Stadium. That form of celebration is against Major League Baseball protocol during the coronavirus pandemic. (Colter Peterson, cpeterson@post-dispatch.com)

MILWAUKEE — The Cardinals' traveling party has been instructed to self-isolate in their hotel rooms after two players tested positive for COVID-19 and other players are going through subsequent exams, sources confirmed to the Post-Dispatch.

As a result, the team will not leave the hotel Friday and will continue to undergo an additional round of tests, according to a team source. The afternoon game at Miller Park was postponed, the Brewers announced later Friday morning.

The teams and Major League Baseball are in the process of contact tracing to determine what that means for the weekend series. As of now, the teams plan to play Saturday's game, as scheduled.

Major League Baseball says that the Cardinals have followed the protocols in place, isolated players, and have enough time for additional testing to resume their road trip with only Friday's interruption. The Cardinals wanted to have early decisions on their isolation and the game because, an executive said, they didn't want to get to a point of "people not wanting to play."

"We have since put the entire traveling party through two different tests today," said John Mozeliak, president of baseball operations, during a Zoom conference call with St. Louis media. "We’re hopeful we get results by either tonight or first thing tomorrow morning, and that way we have a little more clarity on what we look like for tomorrow. And then we will also really assess through our tracing program just to understand if we have concerns and how to manage that. We have a lot of balls up in the air. It’s obviously creating a lot of anxiety here. We understand the importance of trying to get back on the field, but we recognize the importance of player and staff safety as well."

The two tests the team had were the rapid-response test and the swab test. The first test was administered by a Milwaukee-area hospital at the team hotel, and the Cardinals will use those tests to determine if there are any additional positives that need to receive additional testing. The second test will be delivered to MLB's testing site as a double-confirmation for the rapid tests.

It is possibly, Mozeliak said, that the Cardinals will play Saturday with less than a full roster depending on the results of those tests.

The two players with positive tests have exercised their medical privacy rights and not given the team permission to identify them.

MLB has announced the plan for a doubleheader Sunday to make up for Friday's postponed game.

That doubleheader will be two seven-inning games, according to an official source. That rule is set to be announced and go into effect this weekend.

The official description of the doubleheader will be a "traditional" doubleheader, meaning the second game will start soon after the first one ends, and it will not be a day-night doubleheader for new ticket sales. That's because there are no tickets sold for these games.

Shortly before noon Friday, the Cardinals released a statement that detailed their previous 24 hours. The club learned late Thursday that two players had tested positive for COVID-19. Those tests were conducted before Wednesday's game in Minnesota.

The statement from the teams stresses that no members of the traveling party have left their hotel rooms Friday for Miller Park.

"The team is currently conducting rapid testing of the entire traveling party, has implemented contact tracing, and will continue to self-isolate," reads the statement from the team.

The Cardinals arrived in Milwaukee on Wednesday evening and had an off day Thursday before planning to play the Brewers in their home opener on Friday.

The Cardinals' situation is an alarm for Major League Baseball, which was already dealing with an outbreak on the Miami Marlins and the postponements that caused for the Phillies, Yankees, and Orioles. The Marlins have not played since Sunday due to more than half of their active roster testing positive for COVID-19 in the past eight days.

The Cardinals are in the process of doing contact tracing in order to determine who else should be concerned.

The Cardinals last played at Target Field on Wednesday night with the Twins. Since then, however, Cleveland has come to Target Field and presumably used the same visitors' clubhouse.

The Cardinals have two people assigned in their offices to conduct contact tracing, and that includes assistant general manager Moises Rodriguez. John Mozeliak, the Cardinals' president of baseball operations, is with the team on the road trip. He did not immediately respond to a request for comment.

For several years, the Cardinals have had some of the protocols in place that are now standard for travel as baseball tries to play a season during a pandemic. Years ago the Cardinals purchased advanced cleaning equipment that they travel with to disinfect the visiting clubhouse at each ballpark as they arrive and before they depart. Mozeliak has often stressed to the support staff that reducing the spread of illness is something that they can control, and he has made that a part of the team's practices even before the threat of COVID-19.

The Cardinals are traveling with only one player on their taxi squad, infielder Max Schrock. They had planned to carry two, but pitcher Jacob Woodford was added to the active roster Tuesday in Minnesota.

Teams are permitted as many as three players on the taxi squad, but if they have three one must be a catcher.

The abbreviated schedule has all teams playing 67% of their games against division rivals.

Redbirds go down meekly as their offensive woes mount.

At Springfield, there's no place for games as Reyes, Cabrera, Carlson make their case for promotions

Cardinals have outfitted their alternate-site camp with the tech to measure players who won't have traditional game production to make points.

Twins win, 3-0. Cardinals don't get a runner to second base.

Cardinals first base coach Stubby Clapp and pitcher Carlos Martinez high five during the first inning of a game on Saturday, July 25, 2020 against Pittsburgh at Busch Stadium. That form of celebration is against Major League Baseball protocol during the coronavirus pandemic. (Colter Peterson, cpeterson@post-dispatch.com)