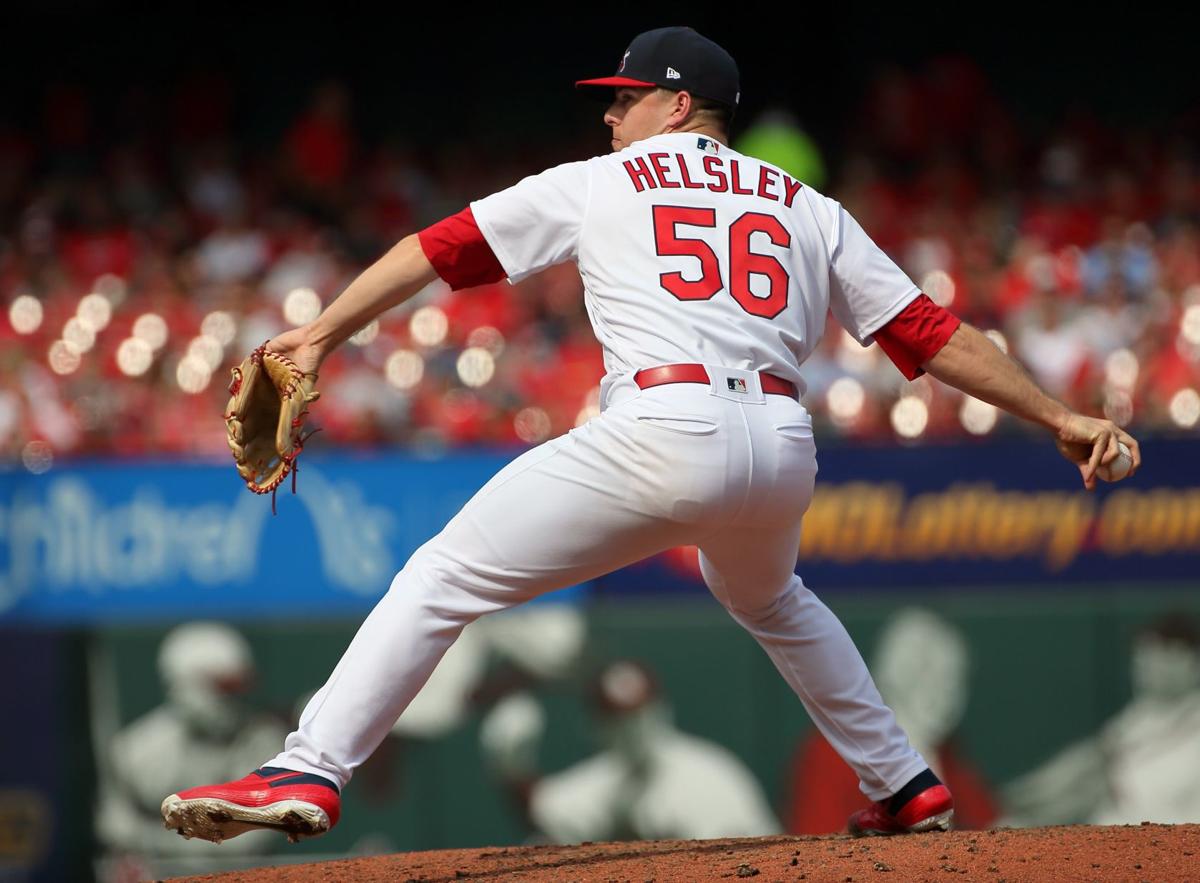 ATLANTA — The contrast was striking Thursday as Cardinals reliever Ryan Helsley, pride of Tahlequah, Okla., and member of the Cherokee Nation, took the mound at a pivotal moment in the eighth inning while a stadium full of Braves fans swung foam tomahawks distributed by the team and chanted as they have for nearly three decades in Atlanta.

The cheer, called the "Tomahawk Chop," was not directed toward Helsley, per se.

Still, he felt something personal.

“I think it’s a misrepresentation of the Cherokee people or Native Americans in general,” Helsley said Friday at SunTrust Park. “Just depicts them in this kind of caveman-type people way who aren’t intellectual. They are a lot more than that. It’s not me being offended by the whole mascot thing. It’s not. It’s about the misconception of us, the Native Americans, and it devalues us and how we’re perceived in that way, or used as mascots. The Redskins and stuff like that.

“That’s the disappointing part,” he continued in a conversation with The Post-Dispatch. “That stuff like this still goes on. It’s just disrespectful, I think.”

Helsley retired one of the two batters he faced in Game 1 of the NLDS. He said he did not notice the chant as he came onto the field because he was zeroed-in on the game and his assignment. But he did take note of it early in the game, and he noticed the foam tomahawks that are placed at every seat at SunTrust before the start of the game.

He said he didn’t watch many Braves games as a kid — he had his own baseball and other sports to chase — so the chant and its role in the Braves atmosphere got him curious. After the game Thursday, he did some reading on its background and various attempts to change it or even erase it from the Atlanta baseball experience.

“It’s interesting that people have suggested that they should change it, and it’s still the same thing,” Helsley said.

Helsley's grandfather was full-blooded Cherokee, his mother said, and the family has deep roots in the heart of Cherokee Nation. His great aunt teaches at an immersion school where the Cherokee language is taught to assure its continued use. Helsley volunteers at the school as a tutor during the offseason. From an earlier story on Helsley: "Ryan's mother, Sherry, works in radiology at the Cherokee Nation health clinics. His father, Jason, does heating, air, and electrical work for the hospital. After playing football in college, his twin brother Kyle returned home to Tahlequah and works at a concrete plant, one that has (aided) in the construction of a new 469,000-square-foot health center in town that will be the largest of its kind for a tribe in the country."

The Braves mascot has traveled with the franchise to Atlanta from two previous homes, first in Boston and then later with Eddie Mathews, Hank Aaron and Warren Spahn in Milwaukee. Called the Doves and Rustlers and other nicknames before they became the Braves, Boston’s National League team took the “Braves” name from the logo of Tammany Hall, the Democratic Party’s monster political machine in New York. A chief of a Delaware tribe had been used for the Hall’s logo, and using the name, Braves, was seen as a nod.

The “Tomahawk Chop” reached Atlanta many decades after the team, migrating from Florida State, where it’s been part of the football team’s cheer there. The Seminole Tribe of Florida has given written permission to the athletics program for the use of it and other symbols.

Borrowed by Atlanta, the cheer grew in presence and popularity as the Braves began their dominant run of division titles through the 1990s and had regular appearances in the postseason and constant appearances every season through the national reach of TBS. Earlier this decade, there was an animatronic cow at Turner Field that would promote Chick-Fil-A and do the motion for the “chop” cheer.

While Major League Baseball has put pressure on Cleveland to stop the usage of its “Chief Wahoo” logo and mascot, change has been slower for Atlanta’s “chop.”

On Saturday, a workout day for the teams at Busch Stadium, the Braves organization issued a statement about Helsley's concerns, which he shared with The Post-Dispatch and other outlets: "We appreciate and take seriously the concerns of Mr. Helsley and have worked to honor and respect the Native American community through the years. Our organization has sought to embrace all people and highlight the many cultures in Braves Country. We will continue to evaluate how we activate elements of our brand, as well as the in-game experience, and look forward to a continued dialogue with those in the Native American community once the season comes to an end."

There have been many mixed messages from baseball and the team about the presence and persistence of the chant. When Turner Field closed as the Braves’ home, a “Final Chop” was advertised, but that was more about the last chant at a location than the last chant, period. The Braves also sold a T-shirt that gave instructions on how to do the “chop” cheer, without the foam tomahawk. Baseball has nudged Atlanta in the opposite direction.

“The Braves have taken steps to take out the tomahawk chop,” commissioner Rob Manfred told The Washington Post in February. “I’d be remiss if I didn’t mention that.”

Yet the official hashtag for the team this season is, “#ChopOn.”

It’s painted on the wall outside the team’s team store at SunTrust Park.

As Game 2 began Friday evening at SunTrust Park, the fans were encouraged to do the chant, the drumroll blaring over the speakers, thousands of foam tomahawks being chopped by thousands of fans, and a graphic on the scoreboard showing the Braves’ tomahawk logo being swung like a hammer. In the first inning, when the Braves got a runner to third base, the chant started up again.

“I feel like there are a lot of other things they could use as mascots,” Helsley said. “Using our heritage as a mascot — it isn’t the best thing. There have been schools who in the past 20, 30 years have changed their mascots. I don’t see why professional teams are so far behind on that.”

Former Reds outfielder was pinch-hitting for Atlanta starter Foltynewicz, who shut out the Cardinals on three hits through seven innings. Relievers Fried and Melancon locked down the final two innings for a 3-0 win that tied the National League Division Series at 1-1.

Hochman: With offense back to its old self, Cardinals should put Carpenter's bat in for Bader

There was much offensive bravado in the Cardinals' Game 1 win — seven runs and seven extra-base hits. In Game 2? Zero and zero. So it's time to get Matt Carpenter’s bat back in the lineup. He’s had one at-bat (a hit) in the first two games. He had a .500 slugging percentage in September.

The Cardinals' final 15 batters produced six runs to tie the game, take the lead and withstand what the Braves threw at them in the bottom of the ninth for a 7-6 win in Game 1 of the NLDS. A couple of slick plays by Paul Goldschmidt and and just enough steely pitches from Carlos Martinez cinched the win.

ATLANTA — As the Cardinals finalized their bullpen for this short-burst playoff series against Atlanta, they sided with left over right, recen…

As if inviting the Cardinals to tame them with lefties, three Atlanta hitters -- Freeman, Donaldson, and Markakis -- have hit .240 vs. lefties, striking out more times (98) than getting hits (92).

Quick Hits: Shildt ready for October? What's on Mo's winter to-do list? How much to lock in Flaherty?

Check out these and other hot topics from baseball writer Derrick Goold's chat with Cardinals fans, including: Rotation for the five-game divi…

The Cardinals, the last of baseball’s six division champs to clinch a division title, arrive at the best-of-five division series within arm’s reach of their best baseball, but also counting on several players who had sub-par seasons.

Wong will return to Cardinals lineup for Game 1; Hudson to bullpen

ATLANTA • After testing his injured hamstring with a series of fielding and running drills and rounds of batting practice against teammates, K…