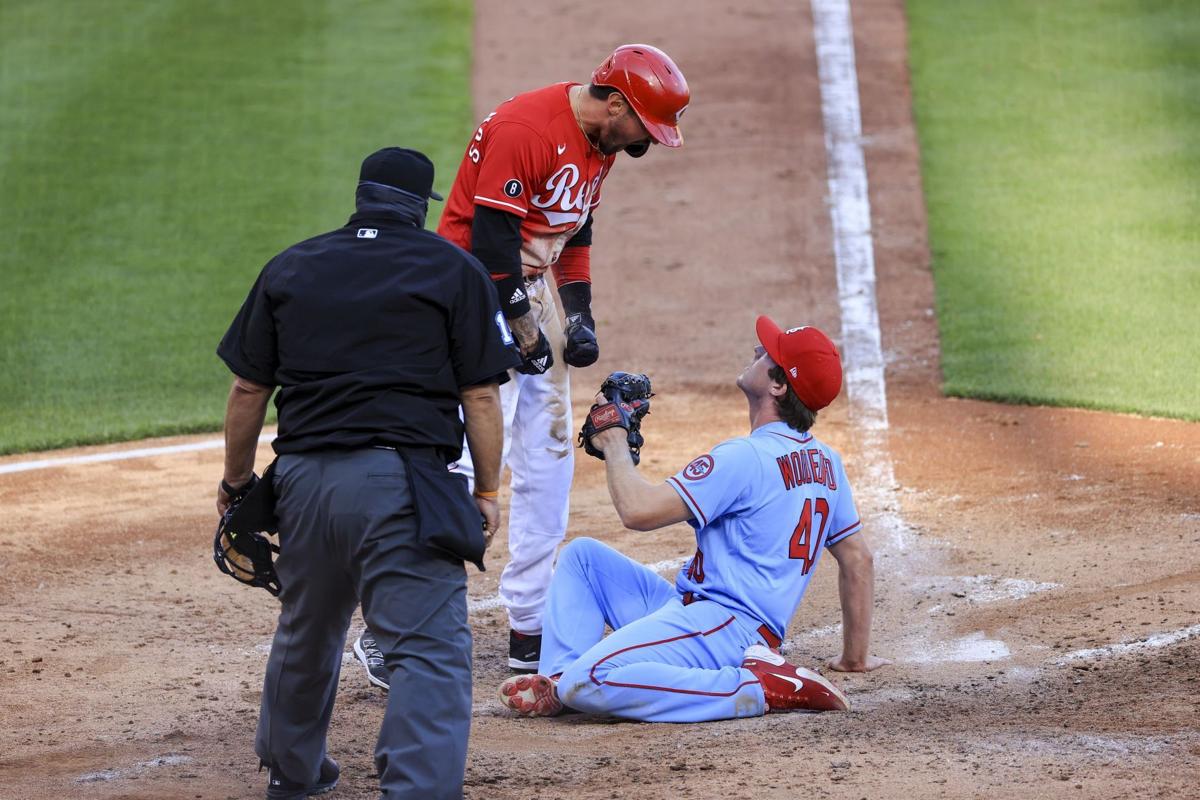 Cincinnati Reds' Nick Castellanos, center, reacts after scoring a run ahead of the tag by St. Louis Cardinals' Jake Woodford, right, during the fourth inning of a baseball game in Cincinnati, Saturday, April 3, 2021. (AP Photo/Aaron Doster) 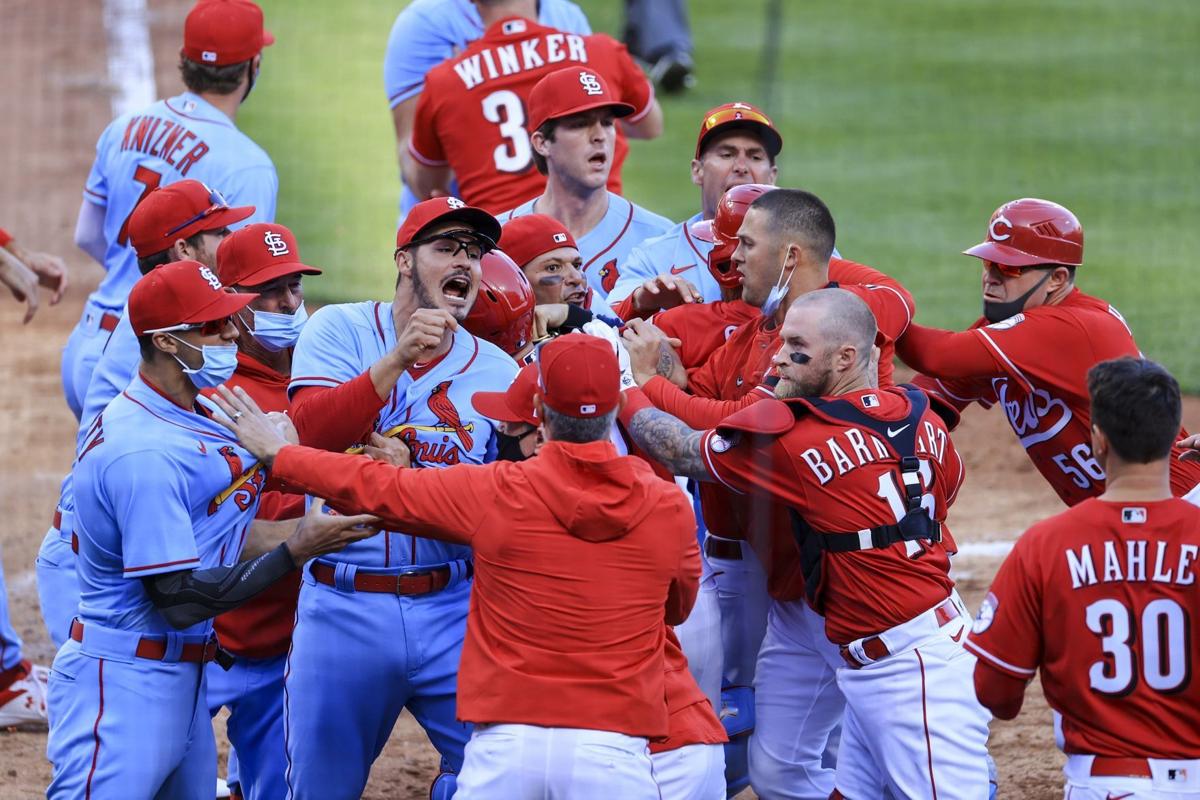 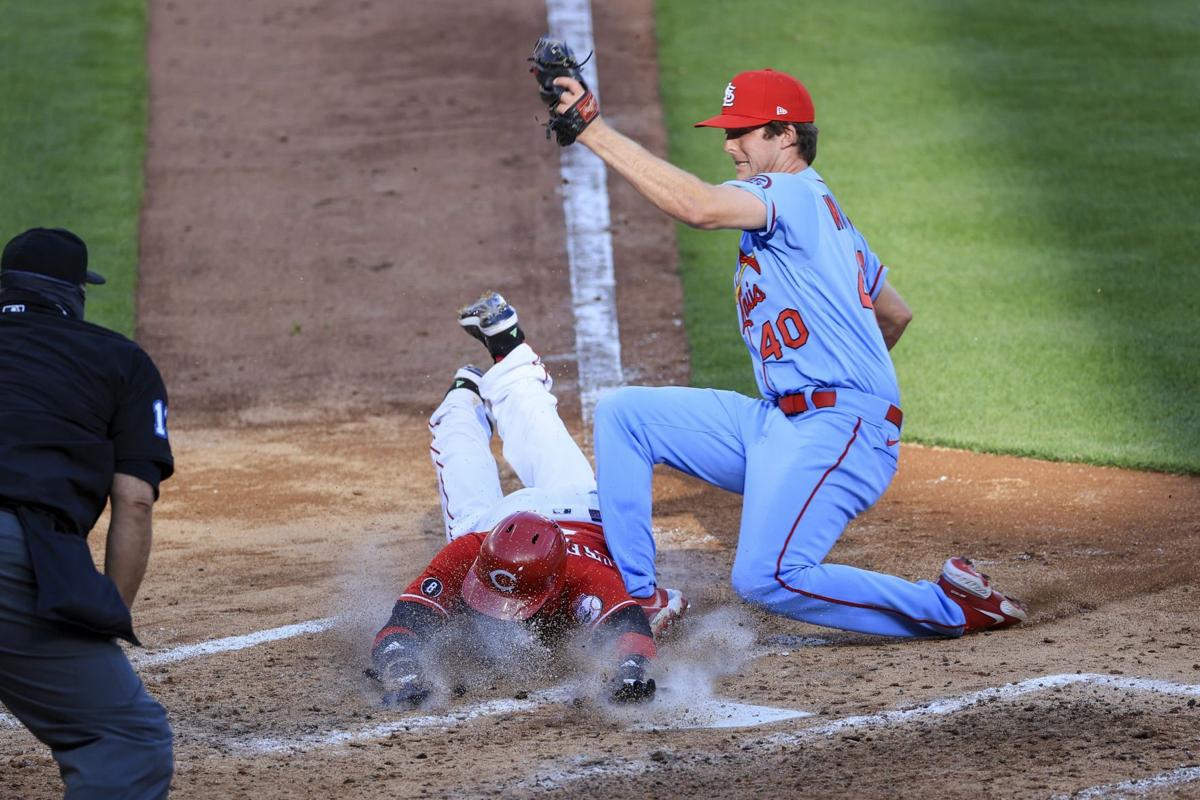 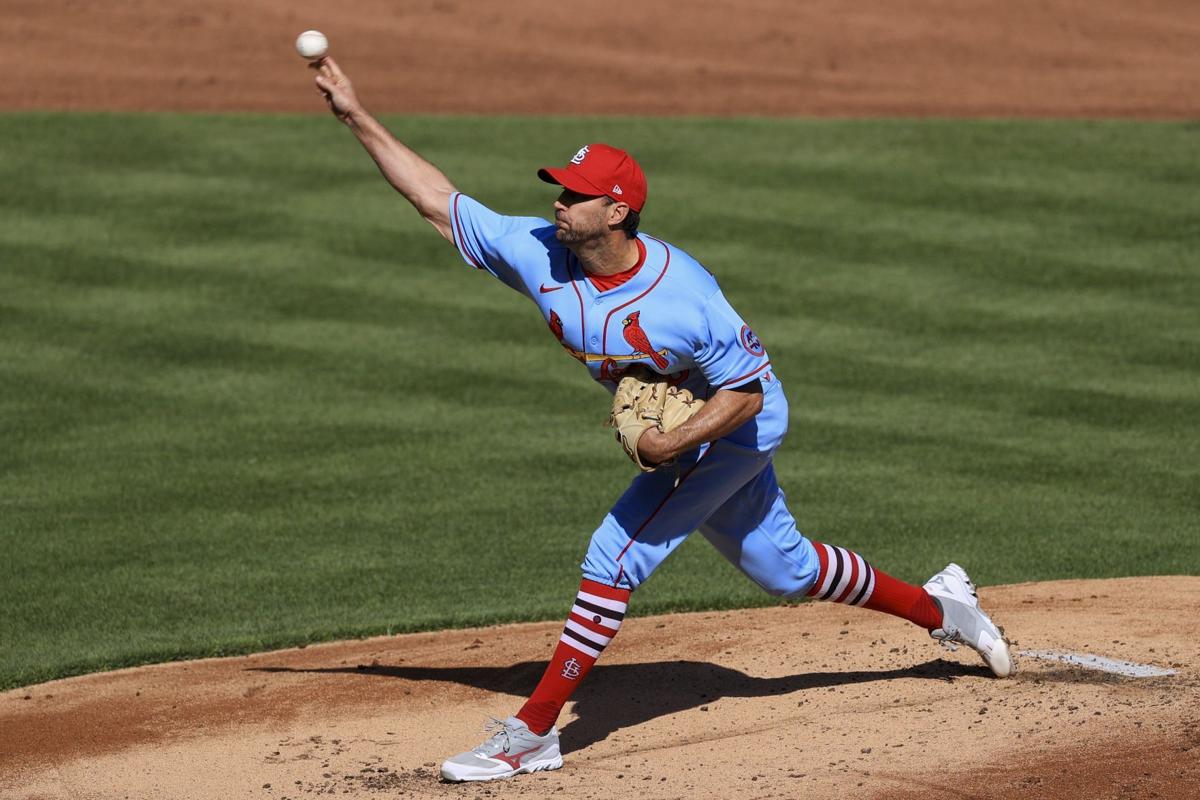 CINCINNATI — As if trying to present the baseball back to the rookie pitcher who hit him wasn't enough to draw the ire of the Cardinals to him, Nicholas Castellanos' flex at the plate after colliding with Jake Woodford assured it.

In the fourth inning of a game rapidly getting out of control for the Cardinals, Woodford hit Castellanos with a misplaced pitch.

Castellanos took issue with the bruise.

He had an epic bat flip in the Reds' decisive loss on opening day, and perhaps expected some rib tickling for that display. Regardless, the Cardinals weren't in a position to do much with starter Adam Wainwright out of the game before he got a ninth out. Woodford had some innings to shoulder not scores to settle.

Castellanos didn't see it that way and carried it with him all the way around the bases to third, where he was when Woodford uncorked a wild pitch.

Woodford raced to the plate.

They met there with Woodford sliding in, but not in time to apply the tag to get Castellanos. The Reds outfielders popped up and looked down at the Cardinals' rookie and flexed over him, as if claiming a knockout or a takedown in some pro wrestling scene.

Catcher Yadier Molina got between the two, and took clear issue with the display of Castellanos. Molina placed his hand on the back of Castellanos' jersey. Woodford got up and toward Castellanos, too.

Nolan Arenado was one of the first teammates to join Molina.

Austin Dean was among the players who tried to remove Woodford from any potential melee. Pitching coach Mike Maddux was one of the first out of the dugout and on the scene trying to separate players.

A donnybrook broke out, with more shoving and jawing than anything. Once tempers cooled, the relievers started back toward the bullpens, and the shouting at each other continued. At one point Cardinals righthander Jordan Hicks had to be held back after shoving a Reds player. He tried to shake loose of teammates and his jacket in order to get back a group of Reds. John Nogowski, who had probably started the inning in the batting cage beside the clubhouse, was among the group that tried to hold Hicks back in the outfield.

Castellanos was the only player ejected.

The COVID-19 protocols forbid such events on the field, and suspensions for some of the Cardinals involved could follow for members of both teams as a result. Major League Baseball will review reports and video from the incident.

There is a history of altercations between the Cardinals and Reds. Brandon Phillips referring to the Cardinals in impolite terms was not forgotten when he tapped Molina on the pads before an at-bat. Molina stood up, went jaw to jaw with Phillips. The Reds and Cardinals' differences also resulted in a mosh pitch behind home plate that left several Cardinals scarred. Chris Carpenter has cleat marks down his back from being kicked by a Reds player, and catcher Jason LaRue sustained a concussion during the brawl. He retired soon after.

The opening series of any season for the Cardinals at a location that doesn't house its club under a roof is usually going to contain as many off days as on days.

There's the mandatory off day, negotiated by the union a few years ago. There's the workout day. And there's the mid-series insurance day — that day set aside in case the opener is rained out, snowed out, or otherwise postponed. That island off day readily available to catch the ceremony.

Cardinals third baseman Nolan Arenado, during a Zoom call with reporters on Saturday afternoon, mentioned how there "are a lot of off days."

What the Cardinals could count on in this season-starting visit to Cincinnati is the consistency of the opposing pitching, and perhaps the lineup that the Cardinals will run out there each day as a counter. They're going to see a righthanded starter in every game of the three-game series, according to the Reds' pitching plans, and based on the Cardinals' preferences that sets up the weekend for rookie Justin Williams to make a first impression.

The lefthanded-hitting outfielder made his first opening day start Thursday and had a key leaping catch near the right-field wall. While the other two outfielders each hit a home run, Williams went hitless at the plate, though he did sting a pitch — as he did throughout spring training.

With Tyler Mahle starting Saturday at Great American Ball Park and former Colorado Rockies pitcher Jeff Hoffman set to go Sunday, the matchups are there for Williams to stake his claim to right field.

In the small sample size of spring, Williams went six-for-24 (.250) with two extra-base hits off righthanded pitchers. He walked twice and struck out only four times in those views of righthanded pitching, and he finished the spring with a .724 OPS and .417 slugging percentage in the splits.

"At the moment we feel Willy being in there against righties," manager Mike Shildt said before Saturday's game.

When the Cardinals headed north without center field Harrison Bader, they brought outfielders Williams and Austin Dean with them. As Dylan Carlson roams center, the next month or so will allow Dean and Williams to make their case for more playing time — even featured playing time — in right field. The best way to get a job in the lineup is to keep it by making the most of having it.

Dean, a righthanded hitter, would be used against lefthanded starters.

On Monday, in Miami, the Cardinals are set to face lefty Trevor Rogers. That would also be Dean's return to Miami after the Cardinals snagged him from the Marlins before the start of the 2020 season.

Here are the lineups for Saturday, the second game of the season.

Some notes: Miles Mikolas threw a bullpen session Friday in Jupiter, Fla. He'll move to the team's alternate-site camp in the near future so that he can with the Cardinals' trainers and do most of his rehab and recovery at Busch Stadium. ... Nick Senzel (shoulder) was not placed on the injured list, and he has been participating in the Reds' batting practice. ... The Cardinals are wearing their victory blue jerseys for the first time in 2021.

A new Cardinals villain has arrived.

To stem the trend the Cardinals turn to Carlos Martinez, who wasn't a sure thing entering spring until he was due to injuries elsewhere.

Reds right fielder, a day after sparking a fracas on the field, triples and has home run sends Cardinals to 12-1 dud.

'Deeply disappointed' Braves say they had hoped 91st Midsummer Classic would serve as a 'platform to enhance the discussion' on controversial law.

Cardinals could use Reyes as an increasingly rare 100-inning reliever.

First baseman has four hits, Arenado has first single and RBI with Cardinals, and Carlson becomes youngest Cardinal to homer on opening day since 1936.

The 4 2/3 innings relievers covered Thursday hinted at how the bullpen will be utilized and the roles cast during spring.

Showtime: After blockbuster trade for Arenado, Cardinals & Flaherty primed to unveil team to an audience

Cincinnati Reds' Nick Castellanos, center, reacts after scoring a run ahead of the tag by St. Louis Cardinals' Jake Woodford, right, during the fourth inning of a baseball game in Cincinnati, Saturday, April 3, 2021. (AP Photo/Aaron Doster)