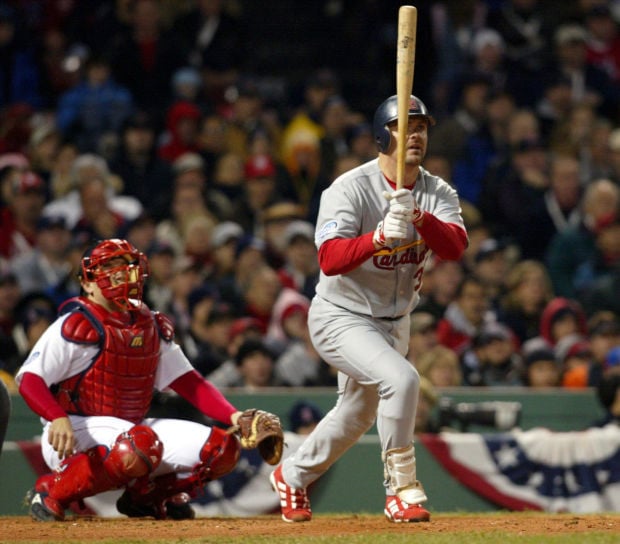 Larry Walker of the Cardinals hits a home run in Game 1 of the 2004 World Series against the Boston Red Sox at Fenway Park. (Photo by J.B. Forbes/Post-Dispatch) 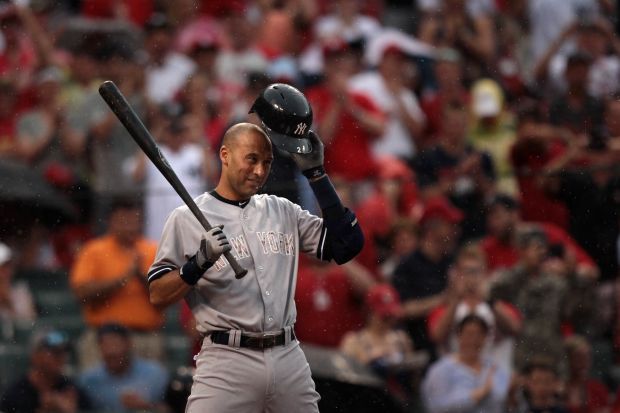 Yankees shortstop Derek Jeter gets a standing ovation from the crowd at his first at-bat in the first inning on Monday, May 26, 2014 at Busch Stadium in St. Louis. Yankees won 6-4. Photo by Huy Mach, hmach@post-dispatch.com

A legend famous for how high he jumped at his position and an all-around great who had to fight the perception altitude was the reason for his aptitude will join Ted Simmons in Cooperstown, N.Y., as part of the National Baseball Hall of Fame's class of 2020.

In addition to New York Yankees shortstop Derek Jeter, Colorado Rockies great and former Cardinals outfielder Larry Walker achieved induction. He did so in his 10th and last year on the writers' ballot. Walker received six more votes than the minimum for election.

"I had the numbers in my head and was prepared for no-call, and then the opposite happened," Walker said on MLB Network shortly after learning of his election. "And then the call comes, and all of sudden you can't breathe."

Jeter finished one vote shy of a unanimous selection. He appeared on 396 of the 397 ballots cast. His teammate Mariano Rivera remains the only player to receive unanimous election, as he did a year ago.

The results of the voting by eligible members of the Baseball Writers' Association of America were announced Tuesday evening.

Walker, the National League MVP in 1997 and a three-time batting champ, had expressed doubt earlier Tuesday, taking to Twitter to write: "Although I believe I’m going to come up a little short today I still wanna thank all you that have been pulling for me and showing your support. I’m grateful for all of you! It’s been fun leading up to today reading everyone’s thoughts."

In 2004, the Cardinals acquired Walker in August and he was a part of two Cardinals teams that won 100 games and reached the National League Championship Series. He won a NL pennant with the Cardinals in 2004.

Walker closed his career with the Cardinals and in 144 games for them hit .286 with a .387 on-base percentage and a .520 slugging percentage. He had 26 homers and 79 RBIs, and he spent most of his time batting ahead of Albert Pujols to score 95 runs. In his career, Walker played a total 1,988 games for the Expos, Rockies, and Cardinals and he retired with 2,160 hits and 383 home runs. His final batting line was .313/.400/.565 for a .965 OPS, though he had an uphill battle with voters because of the time he spent at hitter-friendly Coors Field.

The argument was loaded with thin air.

Less than 40 percent of Walker's at-bats came in Denver, and everywhere else he played he had a .900 OPS and compared well with the other elite hitters of his era.

Although limited by injuries at times through his career, Walker was an all-around great with seven Gold Glove awards and three Silver Slugger awards in his career.

Jeter, now part of the ownership group in Miami, won five World Series, five Gold Gloves, and five Silver Slugger awards during his 20 year career, all with the Yankees. Jeter played only one game in his career where the Yankees were not eligible for the postseason, and that was his last game in pinstripes. He won it with a walk-off single.

"I tried to stay away from that conversation," Jeter said of his Hall of Fame induction. "Reggie (Jackson) used to constantly remind me that, 'You're not a Hall of Famer, yet.' I am big on trying not to jinx things and I basically shied away from those conversations."

With a less crowded ballot than in recent years, many players saw significant and telling jumps in support. Curt Schilling appeared on 70 percent of the ballots and is poised for election in the coming year.

Candidates must receive 75 percent for induction.

Roger Clemens and Barry Bonds, two players anchored by their connection to steroids, jumped to 61 percent and 60.7 percent, respectively.

Omar Vizquel appeared on 52.6 percent of the ballots.

Scott Rolen saw a sizable increase in his third year on the ballot, rising to 35.3 percent.

Walker and Jeter will be inducted with Simmons and Marvin Miller, the longtime and revolutionary head of the players' union, during the annual induction ceremony in Cooperstown, N.Y., in July.

A one-stop shop for all of the Cardinals' Winter Warm-Up coverage from STLtoday.com, including almost 40 bylines and news galore.

Larry Walker of the Cardinals hits a home run in Game 1 of the 2004 World Series against the Boston Red Sox at Fenway Park. (Photo by J.B. Forbes/Post-Dispatch)

Yankees shortstop Derek Jeter gets a standing ovation from the crowd at his first at-bat in the first inning on Monday, May 26, 2014 at Busch Stadium in St. Louis. Yankees won 6-4. Photo by Huy Mach, hmach@post-dispatch.com