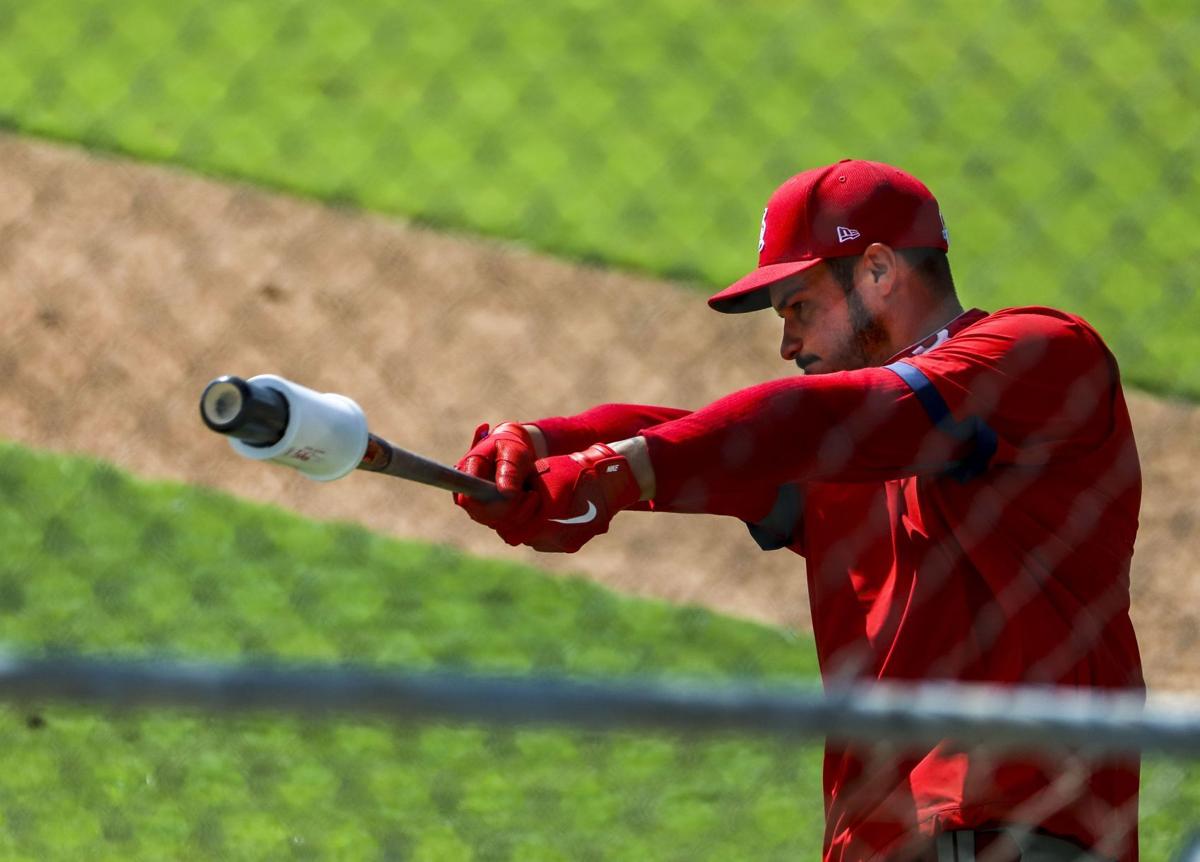 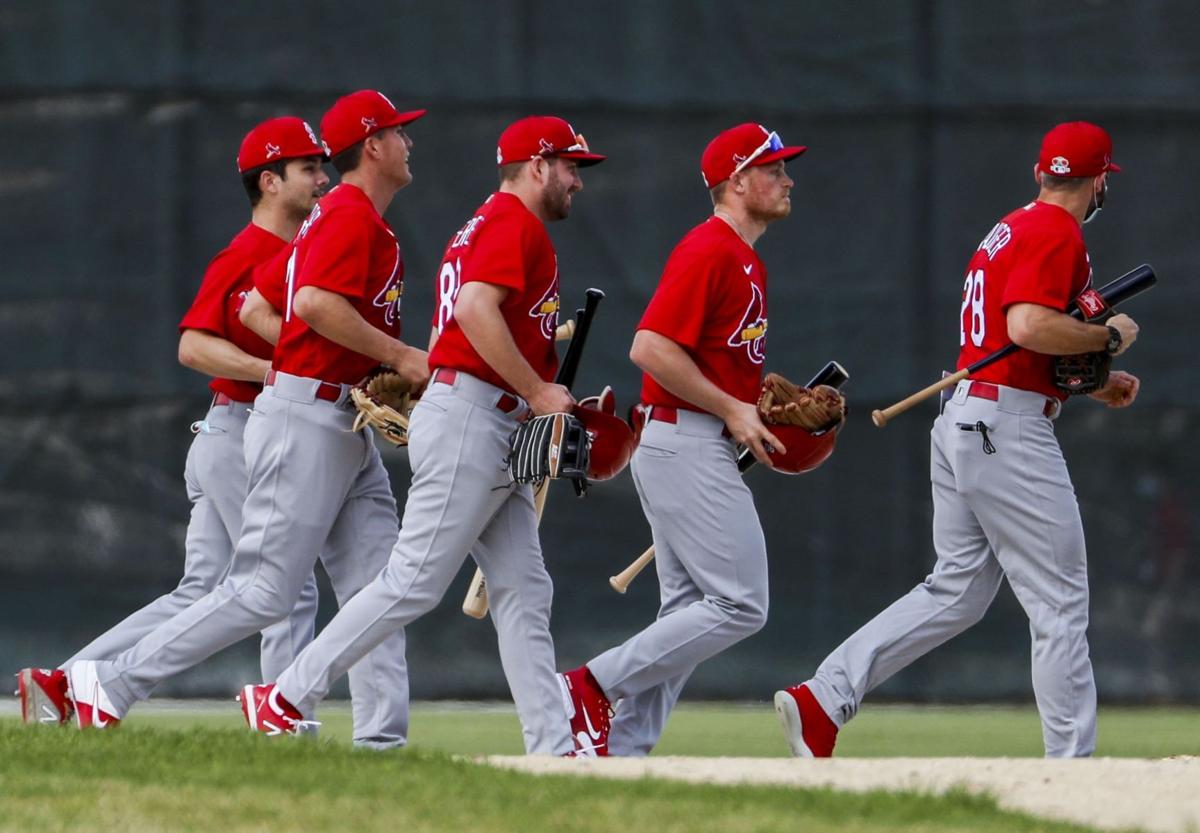 A group of players run through the Roger Dean Stadium complex during Cardinals spring training in Jupiter, Fla. on Monday, Feb. 22, 2021. This is the first day of full team workout for the 2021 spring training session. Photo by Colter Peterson, cpeterson@post-dispatch.com

JUPITER, Fla. – Awaiting them on the back field as Tyler O’Neill and the other two outfielders who could be the Cardinals’ opening day trio had their first official workout of spring was, in O’Neill’s words, a couple of “flamethrowers.”

One from the left in Genesis Cabrera.

The other from the right in Ryan Helsley.

What else did they expect?

The Cardinals’ first full-squad workout of 2021 spring training did not play to the usual full house of fans Monday at their Roger Dean Stadium complex. The roster was carved up into small groups, scattered across the 6 ½ fields, and coordinated in such a way to promote physical distancing and limited numbers. One of the last groups to face live pitching on Day 1 was the one featuring Nolan Arenado. The Cardinals’ new third baseman made his official debut with the team against Tyler Webb in a live BP setting, and he also faced Jake Woodford.

Arenado traveled in a group that included Paul Goldschmidt, Matt Carpenter, and Yadier Molina. A shoulder injury ended his 2020 season, and the Gold Glove third baseman said he hasn't been bothered by it during his warmup to spring training.

"Felt better than pretty good," he said after the workout. "It was a good, solid day. Felt good to be out there with the team, putting pants on again."

The groups were organized by position and service time but also to give pitchers different looks at the plate.

Live BP – the name for pitchers throwing to teammates – is all about the pitcher at this point. Pitchers have a week head start on the hitters, and many of the hitters are tracking pitches more than swinging at them. One of the first pitchers to throw live BP on Monday was lefty Zack Thompson, and he faced a handful of fellow non-roster players, coming immediately after slugger Luken Baker sent some souvenirs into a parking area.

Alex Reyes followed, drawing a group of hitters that included Lane Thomas and Justin Williams – two of the outfielders vying to force their way into the lineup.

As camp opens, the Cardinals see their starting outfield as O’Neill in left, where he won a Gold Glove in 2020; Harrison Bader in center, where he’s been a Gold Glove finalist; and rookie Dylan Carlson in right, where the Cardinals cleared playing time by trading Dexter Fowler. Cardinals president of baseball operations John Mozeliak said his view of camp includes Carlson moving around some because he have the versatility to play all three outfield spots, but that a majority of his time would likely be in right, as it will be in left for O’Neill.

After watching some of Reyes’ outing against teammates, Mozeliak moved over to watch O’Neill & Co. face first Cabrera and then Helsley.

Mozeliak was one of the few spectators on site.

Due to COVID-19 protocols, the back fields, which are normally swarming with fans for the first workout, are closed to the public. The Cardinals have streamlined the number of officials from the team who circulate back there. Four members of Mozeliak’s baseball ops department were present, including general manager Michael Girsch. Chairman Bill DeWitt Jr. was one of the officials roaming the back fields to watch, checking in on Reyes before moving diagonal to the other side of the quadrangle to get a view of Arenado’s BP. The Cardinals’ director of the performance department helped catching coach Jamie Pogue gather fly balls during Baker’s round of BP. Multitasking.

Media access is set up in shifts with the workout schedule split in half. The media has access to the high rise – the perch, if you will – in the center of the George Kissell Quad. The two-story platform at the center of the quad used to be off limits to anyone but coaches and scouts, and it is a favorite place of scouts so that they can see activity on all four fields. Current MLB protocols prohibit the media from sharing the same pathway as players and coaches. Most interviews will continue to be via Zoom.

There were fans who gathered along the grassy areas beyond the field to watch. One pickup truck pulled up snug against a fence so a fan could watch from just above the fence, as close as possible to the ½-field that is used for infield drills.

Some kids got away with baseballs as souvenirs hit over the fence.

An adult who brought his glove got away with more, it seemed.

Other than the previous advertised visa issues, the Cardinals had all position players report on time to camp and cleared to the join the team through coronavirus testing and intake procedures.

Tommy Edman and Paul DeJong were on the field across from Arenado’s group, and along Edmundo Sosa they faced Kodi Whitley and Austin Warner. Again, right then left by design. Of the pitchers in camp, the Cardinals expect Andrew Miller and Jordan Hicks to be slightly behind on their throwing programs. Hicks is coming back from elbow surgery and has not been in competition in 20 months, and he’s throwing every third day instead of every other day, as other pitchers. Miller, veteran reliever, does not need many innings to be ready for the season and has saved his throws in springs past, accelerating to be ready for opening day.

The first formal workout maintained an inform feel because there were so few people gathered, the groups of players so small, and the usual throng around the cage to see, say, Arenado take those opening swings as a Cardinal prohibited. There was no grand team stretch, no full team meeting, and some of the position players sported t-shirts and pullovers instead of their official spring jerseys for the workouts.

That meant O’Neill did trot out his new number.

Fresh off arbitration victory vs. Cardinals, Flaherty focuses on present, does not see free agency as inevitable

Righthander talks about the 'not fun process' of arbitration for first time. Also: Shildt says Kim is getting ready to be part of the rotation.

'There is a lot of attention to detail,' club's star acquisition tells the Post-Dispatch. 'They say things I haven’t really heard before. ... It’s a different vibe.'

John Gant, 'good at baseball,' aims to convince Cardinals he's good enough to be a starter

As full-squad workouts begin Monday, the Cardinals' have an assortment of pitcher vying to start, but may need Gant, others, in more versatile roles.

Molina, club must 'balance that with us trying to create that pipeline of sorts for the next person who is going to get that catching role,' says Mozeliak.

'If you hit, you play': Cardinals prep Carpenter for utility role, but his bat will decide where he fits

Acquisition of Arenado has ripple effects on roster, moving Carpenter to utility role and prompting prospect Nolan Gorman to learn a new position, second base.

Cardinals feel time is right and prospect Thompson is right fit for Kile's No. 57 to be worn again

The jersey No. 57 was last worn by a Cardinal in June 2002, the month Kile died suddenly. Thompson, 23, says the number feels "like an honor."

A group of players run through the Roger Dean Stadium complex during Cardinals spring training in Jupiter, Fla. on Monday, Feb. 22, 2021. This is the first day of full team workout for the 2021 spring training session. Photo by Colter Peterson, cpeterson@post-dispatch.com