Goold: The time a St. Louis baseball team tried to move to LA
0 comments
Share this
{{featured_button_text}}
1 of 2 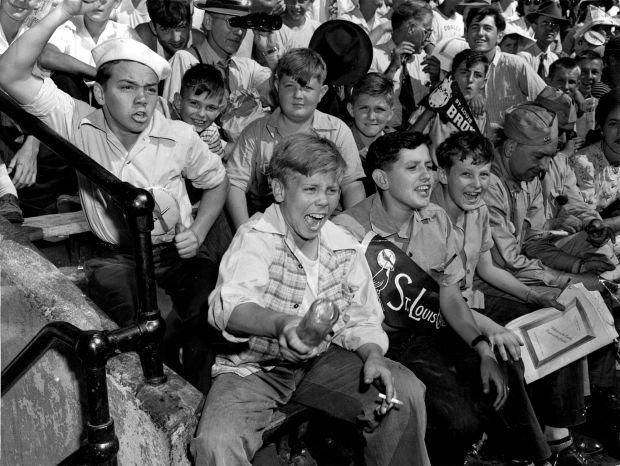 A rowdy group of boys — one holding a cigarette — watches on Oct. 7, 1944, as Harry "the Cat" Brecheen pitches the Cardinals to a 5-1 victory over Sig Jakucki and the Browns in Game 4 of the World Series. The "Streetcar Series" featured two hometown teams. (Post-Dispatch archives) 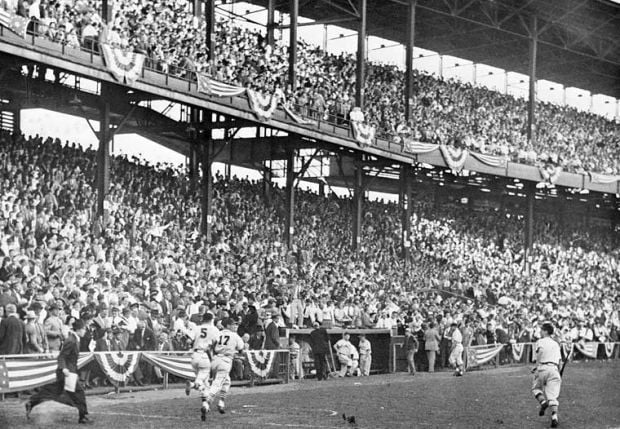 The 1944 World Series between the St. Louis Cardinals and the St. Louis Browns marked the only time for the championship to feature two St. Louis teams.

ST. LOUIS • On the morning after the owners’ vote that kept a St. Louis team from moving to Los Angeles, the Weatherbird, that longtime resident of the Post-Dispatch’s front page, appeared in different military uniforms. Each of the birds snapped a salute beneath a drawing of the U.S. flag. There was a story about how the country had seen its biggest enlistment rush since 1917, when the United States declared war on Germany.

Also tucked into that Dec. 9, 1941 edition of the PD was a story few people may have noticed and fewer people may have cared about at the time: The American League had voted against the Los Angeles Browns.

As an entire city awaits word from Houston on whether the St. Louis Rams will be relocated by the National Football League to Los Angeles, it’s worth recalling that this is not the first time the owner of a St. Louis team had tried to hightail it west to the coast for the promise of greater incomes. It’s also not the first time that owner went to meetings believing it was a gimme putt for relocation. The St. Louis Browns felt that way nearly 75 years ago.

In 1941, Donald Barnes was entering his fifth season as Browns owner, and according to several reports, had yet to turn a profit. The Cardinals were the behemoth at Sportsman’s Park, the team that drew fans, the team that had stars, the team that won championships and was about to enter a stretch when they would win even more. In September 1941, the Cardinals had debuted a young player by the name of Stan Musial, who would became so famous and so good that he would inspire the Kroenkes of central Missouri six years later to give their newborn son Stanley as his middle name.

The Browns, meanwhile, were, as John McGuire once wrote in The Post-Dispatch, the “nearest thing major-league baseball had to a vaudeville act.” The Cardinals and Browns – for much of baseball’s first century – were the furthest west and furthest south teams in the leagues. The Browns, like that classic movie plot, saw a chance to head to Hollywood and reinvent themselves out from the shadow of their prettier, more popular sibling.

At this time, Los Angeles was the third largest city in the United States, behind Chicago and New York, and it was the largest market without a team.

“Capitol of the movie industry, center of styles, a city of some million and one half, Los Angeles cannot be denied its place in the sun,” an article stated, as quoted The National Pastime Museum, “whether it is in baseball or in other activities of the nation.”

Barnes wanted to find a way to get his team to LA, and set about overcoming some of the hurdles holding the Browns in St. Louis, not the least of which was the length of rail travel to an outpost so far away from the other teams. He dispatched his general manager, Bill DeWitt Sr. (father of the Cardinals' current chairman Bill DeWitt Jr.), to New York and elsewhere to make it possible. According to a few accounts, DeWitt worked with American League officials at The New Yorker hotel to map out a schedule that would work. The league was interested because it had to contribute money to keep the Browns going despite a deficit of about $100,000. Stock sold to fans of the Browns had plummeted in value.

Many parties wanted to make it possible for an AL club to call LA home as early as 1942.

“He had these long sheets and wide sheets,” DeWitt described, per the pastime museum. “We had to get a card table in there to spread things out. We’d try it this way and that way, trying to work it out so the other clubs could get out to the coast and back again. On the train. There was no flying then.”

At the same time, Barnes and DeWitt felt that they had gained the support of the American League president and owners for a move. The plan was to have a vote in December 1941 at the winter meetings, and many felt it was a given that the Browns would be going to Los Angeles, more than a decade before the Brooklyn Dodgers did. The Browns had the votes. The Browns had the league president’s support. The Browns even had the schedules, and there was a minor-league ballpark awaiting the Browns arrival.

The vote was set to take place in the second week of December.

But it was against the Browns relocating.

What happened between the beginning of December and the Browns believing they had momentum for a move and the vote was this: Dec. 7, 1941. Pearl Harbor. War.

As the United States joined World War II and a nation shuddered from the attack on Hawaii, the American League owners gathered and decided the fate of the Browns. The belief was that transportation would be limited in the coming season. Trains would be needed for the war effort, not for baseball’s westward expansion. The league couldn’t, with the country going to war, support the move of the St. Louis Browns, and so they stayed put. Three years later, the Browns faced the Cardinals in the 1944 World Series, the Streetcar Series, and the last World Series to be held all at the same ballpark.

A decade after that the Browns did move – east to Baltimore.

The ballpark that was set to host the Browns didn't get a big-league team for decades. The description of it at The National Pastime Museum is lovely, every bit as shiny and appealing as the artists renditions of Camp Kroenke: “Snuggled into a residential neighborhood, the beautiful Spanish-style ballpark, with its double-decked stands and bell tower behind home plate, was a beloved city landmark. Recent upgrades included a state-of-the-art electronic scoreboard.” It had good burgers.

It also had a familiar name.

The Los Angeles Browns would have played at Wrigley Field.

DeWitt era with Cardinals is 20 years old — and going strong

Club marks anniversary Monday of day DeWitt family returned to baseball in St. Louis, 100 years after its first steps into the game.

Jim Thomas has written about the NFL for the Post-Dispatch since 1991 and has covered every Rams game since their arrival in 1995. As relocation to LA looms over the franchise, he reminisces about the good and bad.

Disney exec: Time to act is now on LA relocation

LA Opportunities committee votes 5-1 in favor of Carson project backed by the Chargers and Raiders. But Post-Dispatch sources said there's still a strong push by some in the NFL to unite the Chargers with the Rams' Inglewood proposal.

In 1995, mail carrier Geno Iberg delivered letters from the Rams telling people whether they would get season tickets.

Cardinals closer could wind up with a 2016 salary around $6 million.

A rowdy group of boys — one holding a cigarette — watches on Oct. 7, 1944, as Harry "the Cat" Brecheen pitches the Cardinals to a 5-1 victory over Sig Jakucki and the Browns in Game 4 of the World Series. The "Streetcar Series" featured two hometown teams. (Post-Dispatch archives)

The 1944 World Series between the St. Louis Cardinals and the St. Louis Browns marked the only time for the championship to feature two St. Louis teams.