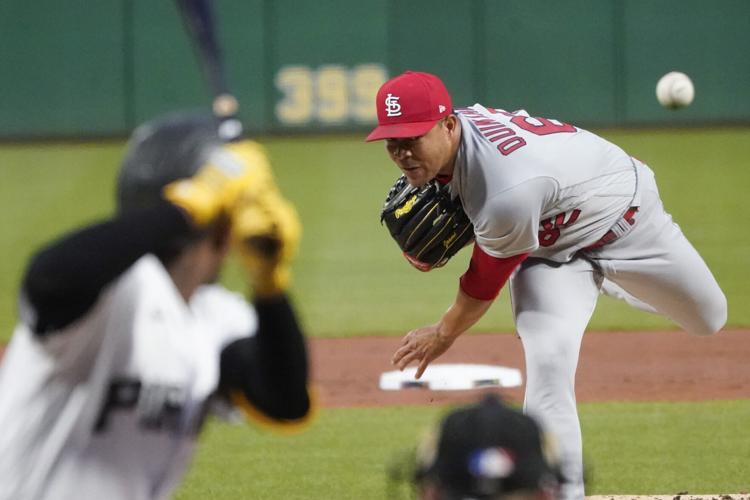 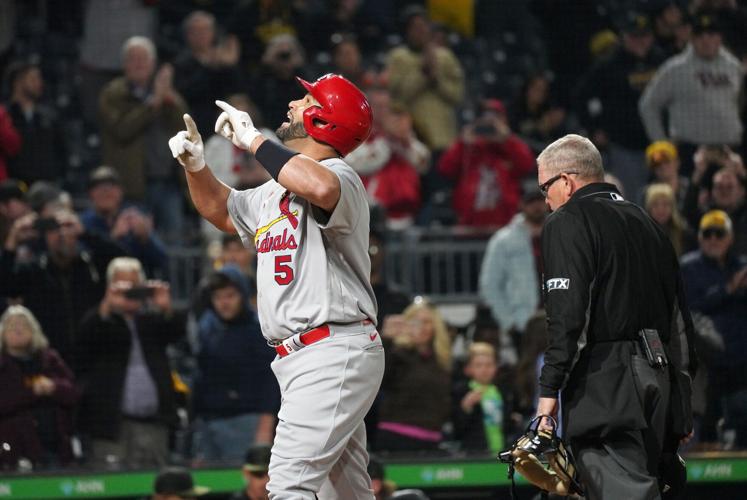 The Cardinals' Albert Pujols celebrates after hitting No. 703, a two-run homerun off of Pirates right-hander Mitch Keller, pulling a two-run shot into the left-field stands to snap a scoreless tie in the sixth inning of a baseball game against the Pittsburgh Pirates in Pittsburgh. (Emily Matthews/Pittsburgh Post-Gazette via AP)

PITTSBURGH — He doesn’t know when or how or against who, but if the Cardinals are able to pitch deep into October, Jose Quintana is certain at some point he will emerge from the bullpen as Miles Mikolas did Monday — a starter recast as a reliever.

“One time the starters are going to go in the bullpen,” Quintana said late Monday. “Our goal is to win the World Series, and one day, I’m going to come (from the bullpen) for the playoffs. I’m going to be really excited. That’s completely different for a starter. You are willing to do that both ways.

“It’s going to happen, for sure.

“I expect that,” he concluded. “That’s going to happen.”

In a game notable for Albert Pujols’ 703rd home run and 2,216th RBI — the latter to surpass Babe Ruth into second place — and ignoble for walking in the losing run, the Cardinals offered a peek at how they’re preparing to use their pitchers in the postseason. Starting with Quintana, relieving with Mikolas, and stretching all the way to end and a tight spot for lefty JoJo Romero, the Cardinals held a walk-through in Monday night’s 3-2 loss to the Pirates at PNC Park. They had roles. They had an understudy, or three. They even had a script.

The Cardinals’ plan was to split the first six innings of the game evenly between starters Quintana and Mikolas, either of whom could start Friday’s playoff opener. Setup man Giovanny Gallegos was going to pitch at least three outs, take the next two days off, and be ready for Friday. Closer Ryan Helsley requested an appearance Tuesday — regardless of score — and then plans to take a day off to be ready for Friday. The Cardinals hoped to get a high-leverage spot for lefty Steven Matz and did with a one-run lead in the seventh. He pitched a scoreless inning, struck out a left-handed batter, and passed the lead ahead. The Cardinals sought the same opening for young lefty Romero. He got wedged into a bases-loaded mess left by Gallegos in the ninth and walked ONeil Cruz on four pitches to end the game on a walk-off walk.

It was not the result the Cardinals wanted, at all.

It was the rehearsal they planned.

“We got to see quite a bit today,” manager Oliver Marmol said. “At this point, it’s getting all the pieces to feel good going into Friday, bottom line. We’ll piece together to make sure guys are getting exactly what they need. The score (stinks). The scripting was actually — can’t plan the Romero thing. But that’s what we wanted to see.”

The Cardinals are playing these final games of the regular season for nothing more than preparation. There is no positioning, no berth to clinch. They won the National League Central crown last week. They’re the third seed into the National League playoffs and have known that for almost a week. Their potential opponent gained clarity Monday night as Philadelphia won to set the field of NL teams and eliminate Milwaukee. The Cardinals will host either the Phillies or San Diego in a best-of-three series this weekend at Busch Stadium. The Cardinals are largely going to base their pitching decisions and roster choices based on the matchup with the opponent, not — if they can help it — some 11th hour performance. (The one exception could be Jordan Hicks possibly appearing in Wednesday’s game.)

That gives these final games the feel of spring training.

With a twist of previewing fall strategy.

While Quintana and Mikolas are targeted to start the first two games of the playoff series, the Cardinals have also been tinkering with the idea of piggybacking starters. How that would look is similar to what they did Monday, just with different starters.

For a team that shifts its lineup significantly based on the handedness of the starter, the Cardinals want to be in position to flip that script.

The starter of the game may only go once through the lineup or pitch to a point in the lineup when the matchup pivots. At that point, a starter from the opposite side of the mound would enter, either to have the upper hand in matchup or force an opponent’s lineup change. The Cardinals could go Mikolas (right), Jordan Montgomery (left), and then after the changes counter with an assortment of right-handers looming, from Hicks to Gallegos to Helsley to possibly Jack Flaherty or Adam Wainwright. Had Milwaukee qualified for a rematch, the Cardinals could start Quintana to challenge how the Brewers used Christian Yelich or counter with a lefty when Yelich started against a right-hander.

“Guys have hit second, they’ve hit ninth, and the next day they’re leading off,” Marmol said, using the lineup as an example of shifting order based on matchup. “So, it’s no different on the pitching side. We’re now going into a situation where it’s all hands on deck. You may start. You may not. But you’re still going to bring a lot of value. Understand it’s about the team, yeah. And they have the right mindset for it. Thankfully.”

As a companion to the Post-Dispatch's Oct. 2 special commemorative edition celebrating the careers of Cardinals greats Albert Pujols and Yadier Molina, the Best Podcast in Baseball gathers several of the writers who contributed to that keepsake publication to discuss the Hall of Fame careers.

Marmol agreed that all his starters can relieve.

All have had experience doing it.

It’s just been a few years.

Mikolas made his first relief appearance as a Cardinal on Monday and his first in the majors since 2013. He spent most of his minor-league career as a reliever, complete with the 66 saves in the minors and 153 games finished. He knew the cadence of coming from the outfield to pitch the bottom of the fourth inning.

“Reliving the glory days, I guess,” he said.

Mikolas allowed one run on three hits through his three innings. The one run came on Bryan Reynolds’ RBI double that cleaved the Cardinals’ lead in half. All of the Cardinals runs Monday came on Pujols’ two-run homer. It was the ninth time in his previous 12 home runs that he’s tied or claimed the lead for the Cardinals, and he has been the most consistent source of offense for the Cardinals for several weeks. That has left little room for the pitching staff to maneuver, but, hey, that’s the playoffs.

Mikolas acknowledged that he was focused a few days ahead, when he’s set to make his third postseason start, his first since 2019. That meant he had pitches he wanted to get through Monday, like in that final tuneup before leaving spring training.

“Check off some boxes,” he said. “Throw some sliders, some curveballs, and then ready for the playoffs.”

Quintana had a similar description.

The Cardinals acquired Quintana from Pittsburgh at the trade deadline, and since then he’s yet to allow more than two earned runs in any start. He allowed a leadoff single and a leadoff walk in two of his three innings Monday and neither run got past second base. Quintana described later how a significant improvement for him in the second half has been how he pitches with a runner on base — aggressive, willing to use his sinker or changeup to get contact and trust in the defense to turn a double play. In the third inning Monday, he walked the No. 8 batter and then quickly got a routine grounder for a double play from the Bucs’ No. 9 hitter.

His next appearance will be his fifth playoff appearance, his first since two starts in the 2017 National League Championship Series with the Cubs. That postseason is the only postseason of his career. He came a year after the Cubs’ championship to the North Side club and allowed eight runs in seven innings to the Dodgers as part of the Cubs’ tumble in the NLCS. Quintana talked Monday about his experience in those playoffs and the “energy” around the game.

He also noted that he learned the importance of “one more game, one more game” and do whatever it takes to win that one game.

Once that meant appearing in the seventh inning to hold a lead.

And is eager to do so if needed again.

“Keep rolling,” Quintana said. “You need a lot of things to win during the playoffs. Go with the best you have. We play a long year to get this opportunity. Why not do really good things out there?”

Photos: Pujols hits career homer No. 703 as Cardinals face the Pirates in Pittsburgh

Cardinals vs. Phillies: 11 thoughts on a playoff rematch 11 years in the making

Phillies are back in the playoffs for the first time since 2011, and their draw? Facing Cardinals, who famously ousted them in 2011. A look at '22 teams.

Cardinals use a four-run rally in the seventh to tie game, Juan Yepez's RBI single in the 10th to win, 8-7. Helsley removed as 'precaution' after injuring finger on pitching hand.

A year that begin with the Cardinals clearing the way to commit to three everyday outfielders ends with the mixing and matching they've made work.

Cardinals think Ryan Helsley's finger will be OK. Jack Flaherty could be a 'force.'

Helsley jammed his finger awkwardly in the eighth inning of a 8-7 victory, right after Flaherty had breezed through a relief inning that hints at his October role.

Dakota Hudson and JoJo Romero were optioned from the major-league roster as Cardinals audition and consider how many lefties they'll take into first round.

The Cardinals' Albert Pujols celebrates after hitting No. 703, a two-run homerun off of Pirates right-hander Mitch Keller, pulling a two-run shot into the left-field stands to snap a scoreless tie in the sixth inning of a baseball game against the Pittsburgh Pirates in Pittsburgh. (Emily Matthews/Pittsburgh Post-Gazette via AP)