As he tried to slip on the brand new, home Cardinals jersey — freshly stitched with his name and the familiar No. 40 — Willson Contreras had a moment where it didn't quite fit up his right arm.

"Big guy," said John Mozeliak as he tugged the sleeve up and onto Contreras' shoulder.

The biggest of cleats to fill.

In a press conference Friday morning at Busch Stadium, the Cardinals introduced their new starting catcher and they finalized a five-year contract with the All-Star. The deal includes a previously undisclosed team option for a sixth year, in 2028, at $17.5 million. The contract is worth a guaranteed $87.5 million, per multiple sources, and with the sixth year it would reach more than $100 million, a contract the first of its size for the Cardinals.

That makes Contreras, who also received a no-trade clause in the deal, the highest paid free-agent ever signed by the Cardinals who was not previously with the team.

Though it felt Friday as if he was already fluent in the ways of the team.

"I'm a winner," he said. "I came here to help this team anyway to win games. ... This organization is built to win and their record shows that."

Contreras, 30, spent the first seven years of his career with the Cubs, winning the 2016 World Series championship as a rookie and later representing the Cubs at three All-Star Games, including this past summer's at Dodger Stadium. He was the starter for the National League in 2018, 2019, and 2022. Contreras hit .243 with 22 home runs for his fourth season of at least 20 or more homers. He had 55 RBIs to go with a career-best 65 runs scored and 47 extra-base hits.

The Cardinals view him as a potential No. 5 hitter.

That means he'll slide into the spot in the lineup last held by Albert Pujols and play the position last manned by Yadier Molina.

"I felt the connection right away," Contreras said of his meeting with Cardinals officials in Orlando, Florida, on Nov. 30. "I made the best decision. I'm here for you guys. I know I came here to succeed Yadier Molina, the greatest catcher of the last two decades. And, for me, it's an honor to be wearing this uniform and be behind the plate."

While at Busch Stadium and receiving a tour of the clubhouse and facilities, Contreras bumped into pitcher Andre Pallante, who was there working out.

The first call he received was from Adam Wainwright, who reached out before the deal was official to welcome him to the team. The two of them joked about making 329 starts together. Contreras said he's also already exchanged messages or phone calls with Giovanny Gallegos and Jack Flaherty, and he said his studying of his teammates "begins now."

During his career with the Cubs, Contreras grew into being the emotional center of the team, acknowledging Friday that he was not easy to play against and that he understood if teams like the Cardinals did not have a high opinion of him.

"Because I play for you not to like me," he said, smiling.

With the Cubs, Contreras played in four postseasons. He has a career average of .256 with 117 home runs and 365 RBIs. His on-base percentage of .349 ranks in the top five for catchers during his career. The right-handed hitter split time in 2022 at catcher and designated hitter, and he has familiarity batting almost everywhere in the top half of the lineup.

Contreras beamed as he described the chance to fulfill what he had previously described as a dream he had: Playing catcher for the Cardinals. It's a spot that he saw as fit while watching as a rival.

He was the longest-tenured position player on the 2022 Cubs but knew he was unlikely to return.

"I did everything I could for them," Contreras said of his time at Wrigley Field. "And I'm excited to turn the page. I'm excited for what my next chapter is."

Photos: First look at Willson Contreras in the No. 40 Cardinals jersey

Cardinals introduce 3-time All-Star after finalizing 5-year, $87.5-million deal with a club option for 2028 and present him jersey he daydreamed about wearing.

The five-year, $87.5-million contract, once finalized with three-time All-Star, will be largest ever for free agent who was not previously a Cardinal.

The St. Louis Cardinals have reached a deal with veteran free agent catcher Willson Contreras sources confirm to the Post-Dispatch. The deal is valued at $87.5 million over a term of five years.

The Cardinals signed the right catcher, but they should not stop there.

Walker, the Cardinals' top prospect and one of the top hitting prospects in baseball, could win a spot on the opening day roster with strong spring. 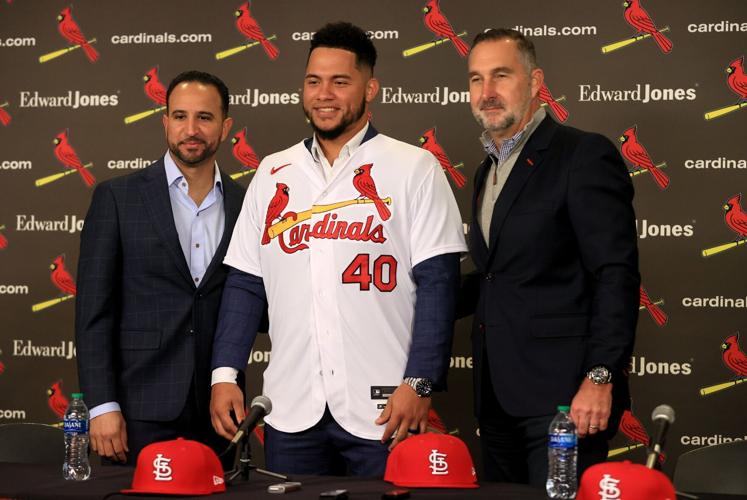 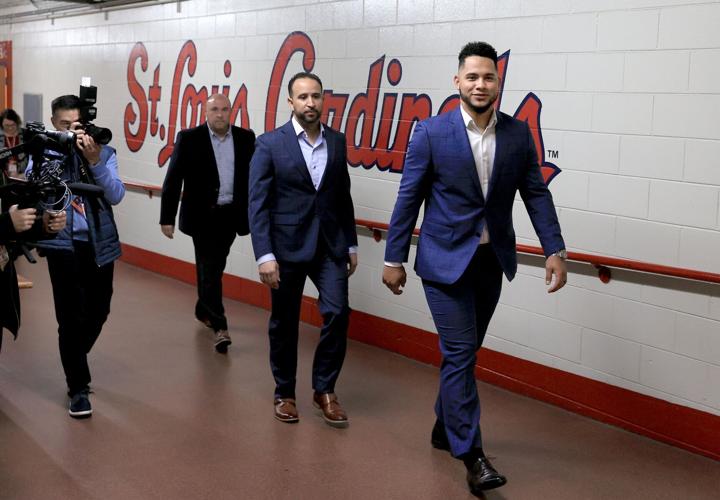 Cardinals manager Oliver Marmol (center) and Willson Contreras (right) walk to a press conference where Contreras would be introduce to the media at Busch Stadium in St. Louis on Wednesday, Dec. 9, 2022. Photo by David Carson, dcarson@post-dispatch.com