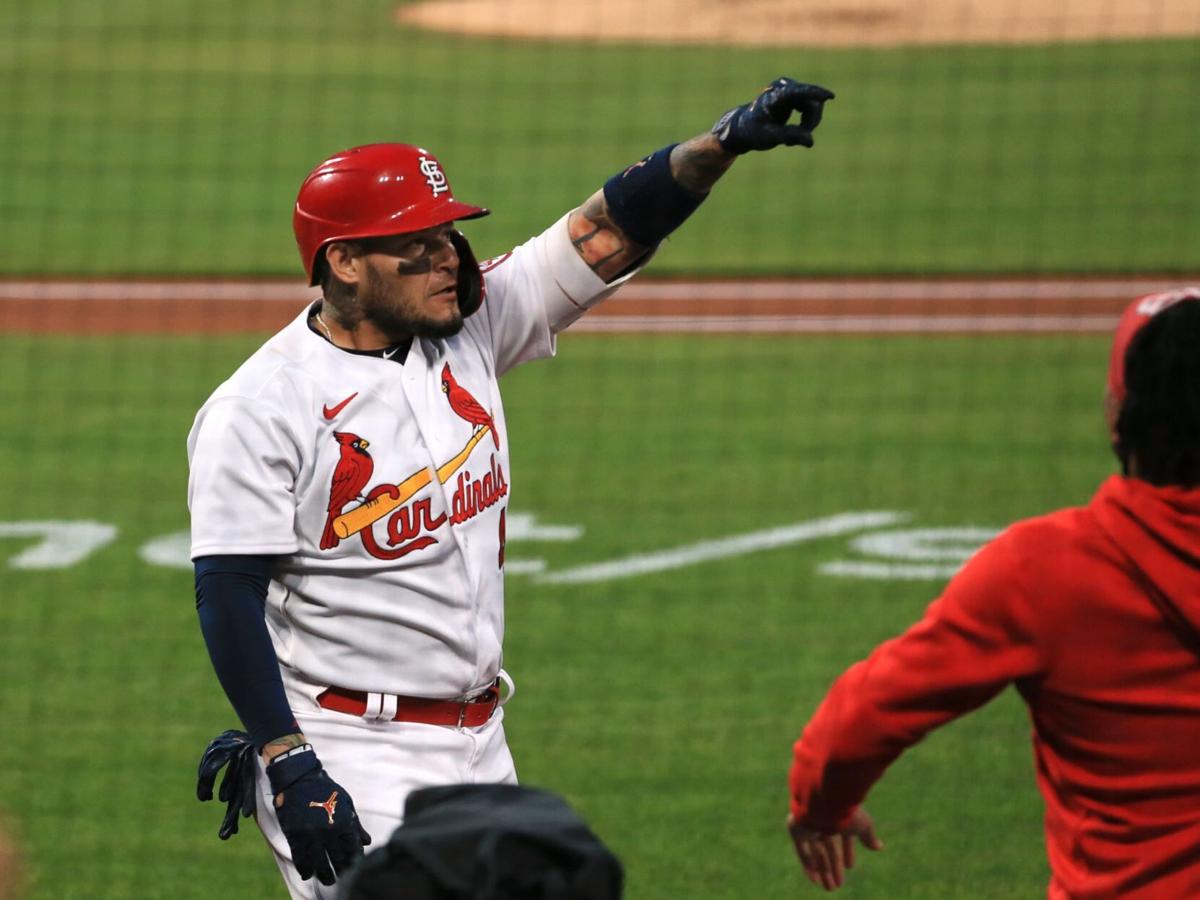 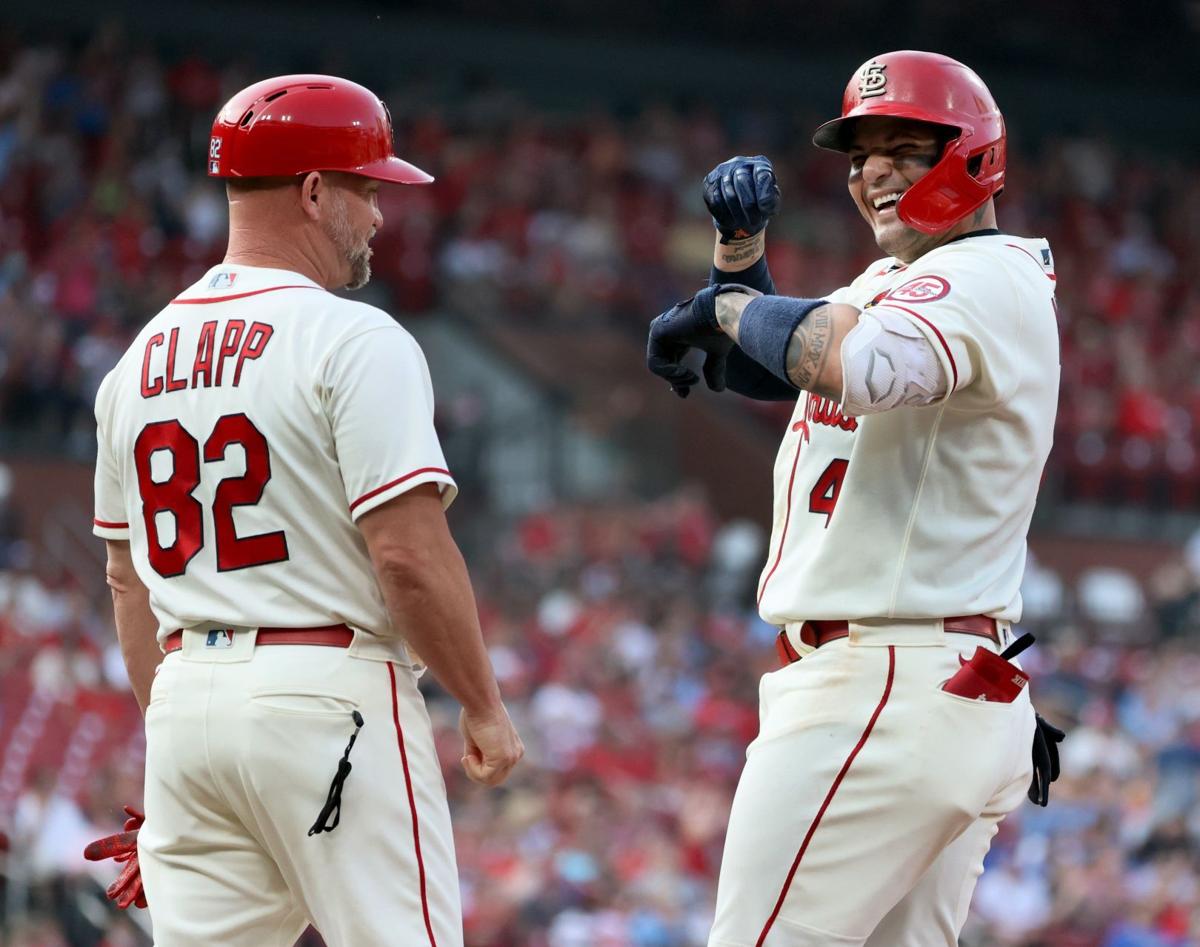 Cardinal catcher Yadier Molina celebrates at first base on Saturday Aug. 7, 2021, after a two-run RBI hit in the first inning of a game against the Kansas City Royals at Busch Stadium in St. Louis, Mo. Photo by Christian Gooden, cgooden@post-dispatch.com

He can already hear the reception he’s going to get in 2022 as he takes his farewell tour of the National League Central, tugging on his mask and rising from the sunken dugout at Wrigley Field for his final start in front of the ivy or walking toward right field to meet a pitcher as they ready for a game in Cincinnati.

“All the boos,” Yadier Molina said.

The Cardinals’ catcher, one of the finest ever to play the position in NL history, talked for the first time Wednesday morning about his new contract for 2022 and confirmed that, yes, it will be his last season before he retires. The wish to play one more season prompted the time of negotiations with the Cardinals so that he could assure he’d finish his 19-year career with them.

“It’s going to be my last year. I want to finish here in this great organization.”

Family, friends, and other close associates have spent the past few years urging Molina to announce his retirement ahead of his final season so that he could get some of the ceremony, the celebration other All-Star players and franchise greats have received. In his press conference, he mentioned seeing the sendoffs that David Ortiz got in Boston and Yankees shortstop Derek Jeter received as he traveled around the majors in his final year, including a stop complete with gifts at Busch Stadium.

Molina’s statement that he’ll retire after the 2022 season also allows the Cardinals to plan ahead, perhaps even sketch up a logo.

Molina, who has caught more games for one team than any catcher in big-league history, approached the Cardinals a little more than a month ago about an extension. Conversations were scheduled for after the trade deadline, and they picked up momentum in the past week. The two sides agreed to a one-year, $10-million deal for 2022, and president of baseball operations called it both the oddest and swiftest negotiations that he can remember.

“When you watch them play a long and distinguished and Hall of Fame career with the organization, to have someone to want to stay and be a part of something from Day 1 to where their career ends is just remarkable in this day and age,” Mozeliak said. “Anybody who was sitting on my side of table realized here you have this treasure, this person who has been iconic for an organization, and what am I supposed to do – fight over money? Yadi knows us. We would try to do anything to resolve this.”

Mozeliak and Molina both referred to each other as close friends throughout the press conference, and Molina referred to the “ups and downs, gives and takes” that close friends have through the years. Mozeliak oversaw the Cardinals’ draft when Molina was selected in the fourth round, back in 2000. They have both risen in influence since.

“The man has earned a lot of respect,” Mozeliak said.

When asked why now was the moment to decide on retiring, Molina smiled.

Molina will turn 40 during his final season, and he’ll be one of two catchers with 2,000 hits that had them all for the same team. Johnny Bench is the other. An All-Star this season, Molina will have a chance to earn an 11th All-Star invite and two seasons in which he could win a 10th Gold Glove Award. Only Bench and Ivan Rodriguez have more Gold Glove awards, and both are in the National Baseball Hall of Fame.

Molina said he will begin lobbying Adam Wainwright to return to the Cardinals so that battery will have a chance in 2022 to set the record for starts by a pitcher-catcher combo.

Molina grew up with the Cardinals, mentored by the late Dave Ricketts and around the greats such as Lou Brock and Bob Gibson and Red Schoendienst. Teams are no longer permitted to offer players personal service contracts as part of a playing contract, but the one-year extension does give Molina a bridge to go from playing for the Cardinals to spending his life around the Cardinals – visiting spring, working with young catchers, perhaps a larger presence at some point within the organization.

And, of course, a plaque awaits and somewhere the sketch of a statue exists.

“I can’t wait to put that red jacket on,” Molina said, grinning.

Cardinals will got with closer by committee. Also: Lefty Lester draws the start against the second-place Reds who have edge in wild-card race, too.

Sinking feeling: McFarland, Garcia have been fits to help fix Cardinals bullpen, but is it temporary?

Extra messy: Brewers rally, seize on mistakes for 6-4 win over Cardinals in 10th

Milwaukee ties game in ninth on solo homer, pulls away in the 10th thanks to a wild pitch, an error, and a misplay. Pushes Cardinals 12 games back in division.

Homecoming: Cardinals righty Flaherty makes first start at Busch since May with pivotal Brewers series in his hand

Flaherty was 8-0 when he last pitched at Busch Stadium three months ago.

'Belief can go a long way': Freese knows route Cardinals can take to contention; it brought him home as October legend

With a Golden career headed for Bronze, Molina, 39, repeated his plan to play one more year and intends for it to be with Cardinals. Also: 2022 schedule released.

Cardinal catcher Yadier Molina celebrates at first base on Saturday Aug. 7, 2021, after a two-run RBI hit in the first inning of a game against the Kansas City Royals at Busch Stadium in St. Louis, Mo. Photo by Christian Gooden, cgooden@post-dispatch.com