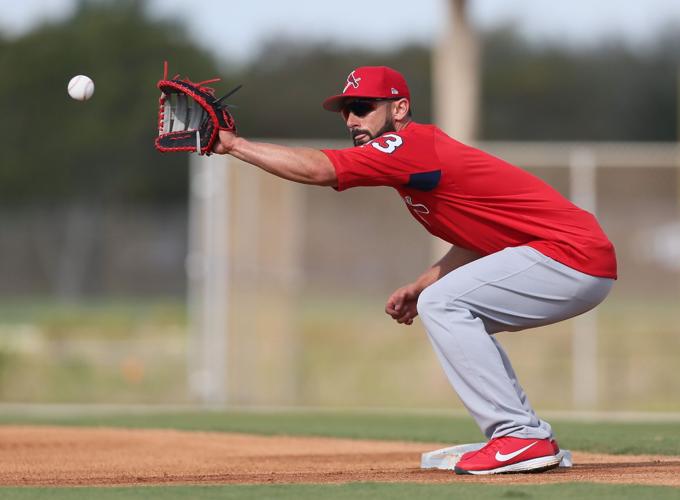 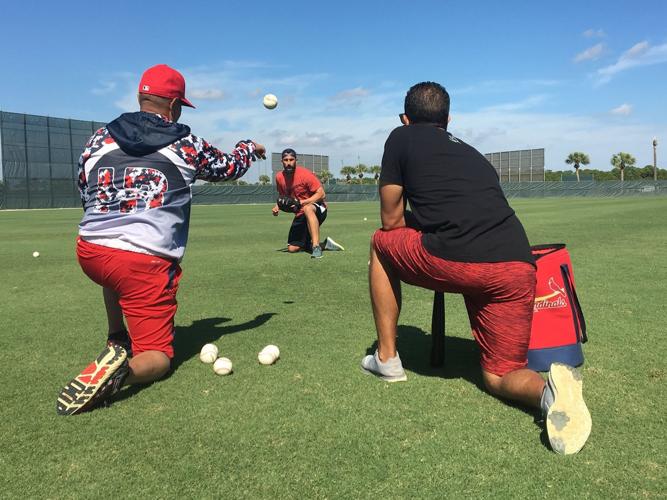 JUPITER, Fla. • At first glance, it could have been a basketball drill.

Cardinals infielder Matt Carpenter, cones at his feet and coaches all around, shuffled laterally to catch a soft-tossed baseball, jab-stepped back to catch another, and then hustled forward to catch another. The whole workout was captured on video by a member of the training staff so that Carpenter, that drill complete, could watch how he looked.

The weekend before the official start of spring training tends to be a quiet one around Roger Dean Stadium and other Grapefruit League sites. Carpenter was alone in his workouts after spending most of the past week running infield drills with Paul DeJong, Kolten Wong, Luke Voit and a rotation of others. Miles Mikolas and Jack Flaherty both threw bullpens, with Andrew Knizner reporting behind the plate. Sean Gilmartin and Preston Guilmet made their first appearances of camp and were able to take the field with each other for some catch.

Manager Mike Matheny visited the clubhouse, which is being organized for the week ahead. Name plates have been slid in above the lockers. Matheny and his coaches will meet Monday for their formal meetings with the front office at the start of spring training. And Sunday, many players said, figures to be a quiet day around the ballpark – that last break before the spring sprint to opening day begins. It’s just like last year. Same as it was.

That is the same word that Carpenter used to describe his shoulder.

The Cardinals’ All-Star leadoff hitter and expected first baseman spent most of last season swinging through a injury that left him with bone on bone scraping in his right shoulder. The Cardinals modified some of his schedule, reduced his batting practice, but still called on him to leadoff and, at times, even play third base with the soreness. He said he had to “manage” the injury – and some of that meant finding ways on base when he couldn’t drive the ball. He hit an uncharacteristic .241 but offset that with a .384 on-base percentage built upon a career-high 109 walks. The pain in his shoulder sapped some of his power. His slugging percentage dipped from .505 in 2015 and 2014 to .451 in 2017.

The remedy for the shoulder injury was rest, not surgery. Carpenter gave the joint the break it needed and then began an offseason program that was modified to help his shoulder.

“Just really did smart things with my training,” Carpenter said. “We are just being proactive about it. Cleaned up everything. Anything that I was having issues with has been absolutely cleaned up.

“A lot of it is just being focused on it, knowing ways to help.”

Carpenter said he hasn’t had to change much about his weightlifting or other workouts to protect the shoulder. Rather, the stress has been on some of the tissue work and the emphasis on flexibility. That dovetails with another focus of his winter: explosive movement.

Late last season, Carpenter described how he could have more of a jolt in the infield, and how that first step reaction that makes a fielder better would also help him improve as a baserunning. He added that work into his offseason and has continued the drills and work on “explosive movements” in the early days of February here at Roger Dean Stadium. He was out with Jose Oquendo do drills that could have been on a hardcourt. He’s done drills like it before, and he’s fitting them into the work he’s doing at first, second, and third to prepare if needed as the super utility player.

That’s what he’s thinking about.

Just as noteworthy, he said, is what he’s not thinking about.

“We’re just aware, but it’s not long something I have to worry about,” Carpenter said. “It’s not in the back of mind, like it was, not at all. It’s not limiting me in any way. I can go out and do whatever. It is as if everything is normal.”

Columnist arrives to Jupiter, Fla., for Cardinals spring training -- and takes in the early sights and sounds.

Looking at a key part of the Cards' bench.

Matheny: Fowler will start at leadoff, Carpenter likely back to No. 3

JUPITER, Fla. • The most likely roster allotment for the Cardinals this season would be 12 pitchers and five extra men to go with the eight re…

Wainwright: 'Now is not the time to save anything'

Veteran Cardinals starter coming off elbow surgery works through his pitches and talks about his plans for spring training as official workouts approach. Asked if he feels that he’s one of the team's big questions, Waino replied, 'I wouldn’t think so.'

Shortstop's profile on the field is growing — which has him thinking about balancing his interests off of it, too. He wants both to stay in tune.

Lance Lynn, slimmed down and several weeks into his throwing program, has everything he needs to start the season — except for a team. A source said seven or eight teams have shown interest in the free-agent righthander. The Cardinals are not in the mix.

Conner Greene, a bullpen candidate acquired from Toronto in the Randal Grichuk trade, struggled last summer because of reactions to a change in his ADHD medication. He was stuck in Class AA for a third consecutive season, and his starts were as erratic as his focus.

Who's on first (and third, and sometimes second) for Cardinals? Carpenter doesn't care