No foam tomahawks on seats at Braves ballpark after comments by Cards' Helsley; other changes expected
0 comments
Share this
{{featured_button_text}}
1 of 2 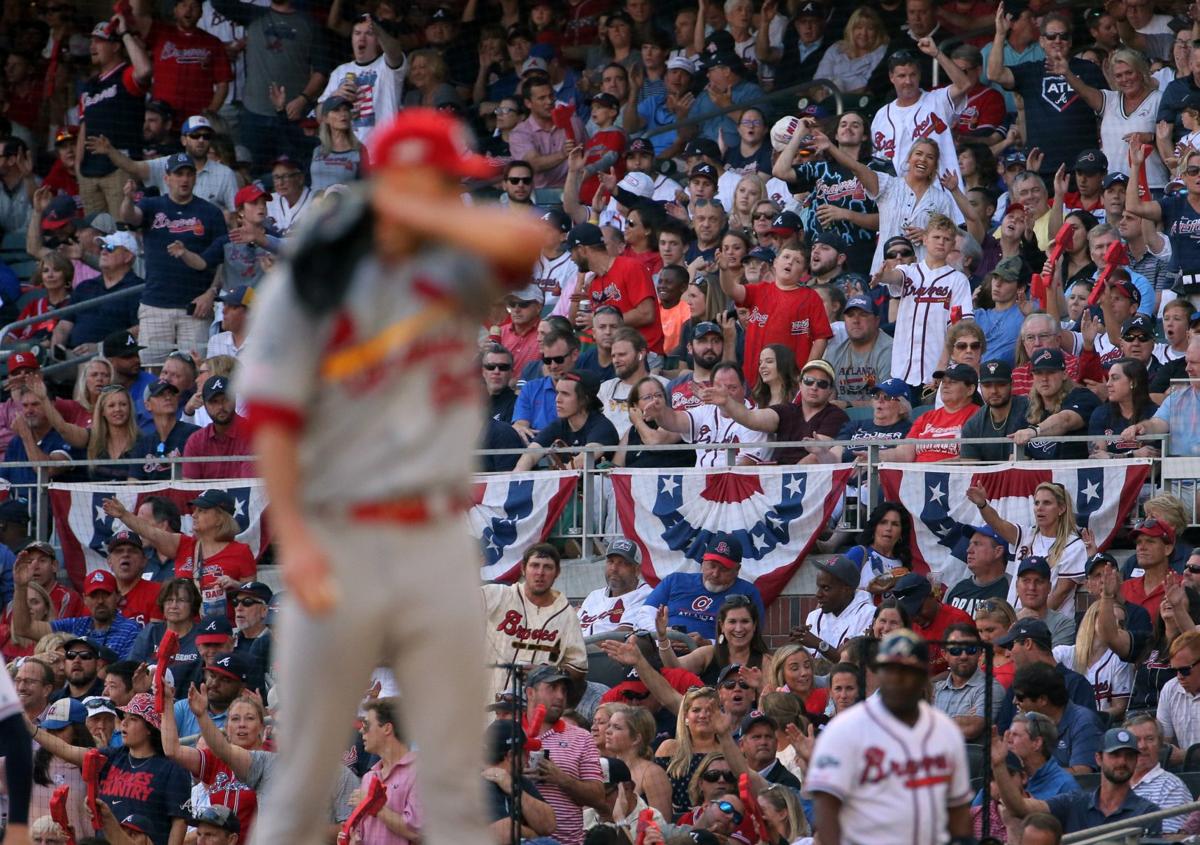 ATLANTA — When fans arrived Wednesday at SunTrust Park for Game 5 of the National League Division Series, one of the most important playoff games for the Atlanta Braves in more than a decade, there was something missing from their seats.

The foam tomahawks that had been placed at each seat before games 1 and 2 of this series against the Cardinals were not there this time.

Rookie Ryan Helsley's comments after Game 1 about how he found the Braves' 'Tomahawk Chop' chant "a disappointment" and "disrespectful" to his Cherokee heritage prompted the Braves to consider how they promote the cheer and how they could alter their game-day practices as a result of Helsley's thoughts.

Two officials at the ballpark confirmed that the foam tomahawks were not at the seats in response to Helsley's comments and the conversations the team had as a result of them.

There will be other changes during the in-game entertainment and fan interaction involving the "chop" that will be different from games 1 and 2.

"We're sensitive to it," a Braves spokesperson said.

For Helsley's comments and more please follow this link to the story at STLtoday.com from earlier in the series.

In Game 1 of the NLDS, Helsley entered the game with one out in the eighth inning. The Braves had encouraged their fans to join in the "Tomahawk Chop" chant several times throughout the game — including just before the Braves' lineup was announced — and did so again in the crucible of that late-inning moment. The cheer was not directed at Helsley, and it's doubtful Atlanta was even aware of his deep, family ties and his place in Cherokee Nation.

Helsley said he was not aware of the chant as he warmed up on the mound and only later heard it was going on. But he had heard it earlier in the game, and he was prompted by that experience to do research later that night about its origin and use in Atlanta.

The day after Helsley's comments appeared in the Post-Dispatch, the Braves issued a statement that they would "continue to evaluate how we activate elements of our brand, as well as the in-game experience." The changes Wednesday underscore that comment.

Helsley got a lot of feedback from his comments, some negative and some vulgar. He also said Wednesday that he received a lot of supportive comments, suggesting that it was important that he, having been on the mound during the chant, discuss his opinion.

He did not hear personally from Atlanta officials.

Helsley imagines that he will hear from the crowd during Game 5 and is unsure what will greet him if he pitches.

After this story was posted, Atlanta issued a statement to the media about the changes: "Out of respect for the concerns expressed by Mr. Helsley, we will take several efforts to reduce the Tomahawk Chop during our in-ballpark presentation today. Among other things, these steps include not distributing foam tomahawks to each seat and not playing the accompanying music or using Chop-related graphics when Mr. Helsley is in the game. As stated earlier, we will continue to evaluate how we activate elements of our brand, as well as the overall in-game experience. We look forward to a continued dialogue with those in the Native American community after the postseason concludes."

Atlanta's officials have considered what they'll put on the scoreboard and the role the stadium's urging for cheers could be a part of that. Of course, the "chop" can still develop organically through the crowd, as it did when it first became part of the playoffs and ballpark atmosphere in Atlanta.

"I respect Ryan's opinion. All he's doing is trying to support his heritage," Cardinals manager Mike Shildt said. "He's sincere about his heritage and the thoughts behind it. I don't think he's got anything malicious toward it. I think he was just honest about it. And I respect that completely. ... Hels is a pro. And the hope would be, look, he was speaking out of sincerity. He wasn't speaking out of maliciousness or anything like that.

"So people can take that in whatever context they want to take it in, and how they react is how they react," the manager concluded. "But I'm sure Ryan will pitch equally good regardless."

• Read live updates from Game 5 of the NLDS

'Feared' and 'fearless' Flaherty primed for his winner-take-all assignment

In this age of home runs and strikeouts, the Cardinals scored 10 runs in an inning without a homer.

FedEx calls for the Washington Redskins to change their name, a major shift in the debate

Politicians and celebrities have called for a name change in recent weeks amid a wave of social unrest in the country.