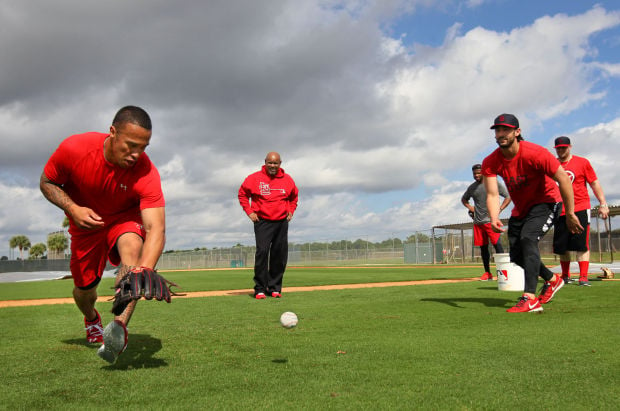 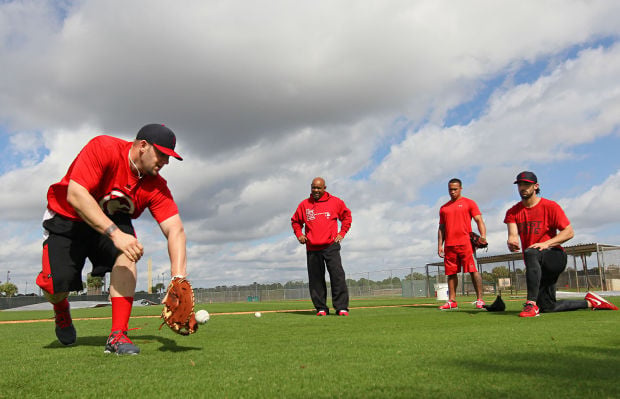 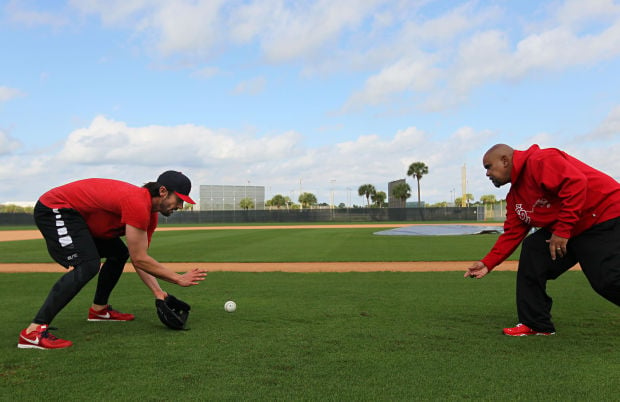 JUPITER, Fla. • After he had a chance to catch his breath and regain his legs, Cardinals third baseman Matt Carpenter offered a one-word assessment of the drill coach Jose Oquendo sprang on the infielders Tuesday morning.

A year ago, Carpenter was one of the first position players to report to camp so that he could some individual work with Oquendo at his new position, second base. Carpenter turned that schooling into a starting job and eventually into an All-Star summer at second base. Carpenter has again arrived early to spring training – full-squad workouts don’t start officially for another week – but not to get more work at second base. He’ll return to third base, and the past few mornings he been out on the field working with Oquendo.

After feeding Carpenter the standard-issue groundballs Tuesday morning, Oquendo had him and fellow third baseman Carson Kelly, a prospect, come into foul territory. There he introduced them to a speed-feed drill. Standing about three paces away from the fielder, Oquendo would bowl grounders to them – one right after another, before they could get their feet set. He had each one of them 10 straight on, 10 to their backhand, 10 to their forehand, and then the finisher, a round of 15 grounders, five in each direction.

The first round had them winded.

The second round had them gassed.

The final round had them determined.

“You can train all offseason, but fielding groundballs is like playing basketball – it’s a different kind of shape that you just can’t get into unless you’re doing it,” Carpenter said. “That’s a great drill to get your legs under you and get you ready for taking massive amounts of fungoes.”

Oquendo has a Rolodex of such drills. He put David Eckstein through a series of grounder tests at various points in the infield to help him work on his arm strength. He had Carpenter taking grounders on the grass last season to help him get a feel for the hands and throwing position he would need at second base – and how that was different than his experience at third base. For Skip Schumaker a few springs ago, Oquendo designed several drills for him to get a feel on how to turn a double play and the different places a second baseman must go to receive the ball from second.

Rookie Kolten Wong left Busch Stadium a few years back after the Cardinals drafted him with a DVD that Oquendo put together to show the young infielder drills he'd need to protect himself from runners on double play turns.

The speed-grounder drill is something that Oquendo said he has done in the past, but he mostly does it with young players – like the ones he instructs during the offseason in St. Louis – or with rehabbing infielders. It is, he said, a good drill for infielders who cannot throw.

“It’s something different that pushes them a little,” Oquendo said. “Get the quickness of where they need to go, build the legs. They may have to ask me to do it. Can’t do it everyday.”

One of the finer fielding instructors in the game, Oquendo has an eye for what Carpenter and other infielders have described as “the technical details of fielding a baseball.” Kelly, who is in camp early to continue learning the position of catcher, was striding for forehand balls with the wrong leg so that when he got to the ball he had to take an extra step to get in a throwing position. Oquendo drilled him on that. During the light bullpen throws on Monday, Cardinals major-league pitchers threw to Class AA catcher Casey Rasmus, Colby’s younger brother. Oquendo, observing from the side, kept reminding Rasmus to tuck his throwing hand behind his back or behind his knee – somewhere to protect it.

“Is this a throwing situation?” Oquendo asked him.

He suggested he treat the bullpen as if there wasn’t a runner on base and protect his hand, and that he practice now so it’s second nature in the game.

That’s one benefit of the speed-grounder drill. The grounders are coming so fast that the player has to rely on instincts to get there, especially as the legs tire. Crossing over with the wrong leg will foil the timing of the drill and a grounder will get past. It’s a quick way, Oquendo agreed, to create the muscle memory needed for fundamental fielding.

“One of the things that he’s a stickler for and a master for is just the basics of fielding a groundball,” Carpenter said. “He has a unique way of creating drills like that where it just takes the thought out of it. You’re reacting on instincts only. There’s method to his madness.”

After finishing their rounds of speed grounders, Kelly had to get back to his catching duties and Carpenter stayed. There were other infielders who had come for their turn on the infield and their rounds of garden-variety grounders. Second baseman Wong joined the group and Rasmus split time with him at second. First basemen Matt Adams and Xavier Scruggs alternated at their position. Once those grounders were done, they all came back to foul territory for their runs through the speed-grounder drill.

Carpenter got to do the bowling of grounders this time.

It was his turn to make the infielder work.

Wong out to 'prove everyone wrong'

Cards' rookie second baseman vows to put 2013 struggle behind him.

Burwell: Carpenter's workout shows what it takes to be a pro

Matt Carpenter says his experience at second base last season 'will ultimately make me better at third' in 2014.

Taveras arrives; not yet cleared to run

Cardinals top prospect says his surgically repaired ankle 'feels normal, good,' but he is not cleared to run full speed.

Matt Adams will wear No. 32 this season

JUPITER, Fla. • Top prospect Oscar Taveras, who reported to Cardinals camp today, will wear jersey No. 77 this spring. Here are the other numb…

Goold Q-&-A: On Kelly vs. Martinez, Cards' lineup and more

A 60-second glimpse into the day of Cardinals catcher Yadier Molina during spring training on Thursday, Feb. 13, 2014 in Jupiter, Fla.

Photos from Wednesday of the St. Louis Cardinals spring training.

Video: What does Wainwright eat before every game?

Cardinals chef and nutritionist Simon Lusky prepares healthy meals for the team including the first breakfast of spring training on Thursday,…

A 60-second glimpse into the first official workout for pitchers and catcher at the Cardinals spring training on Thursday, Feb. 13, 2014 in J…