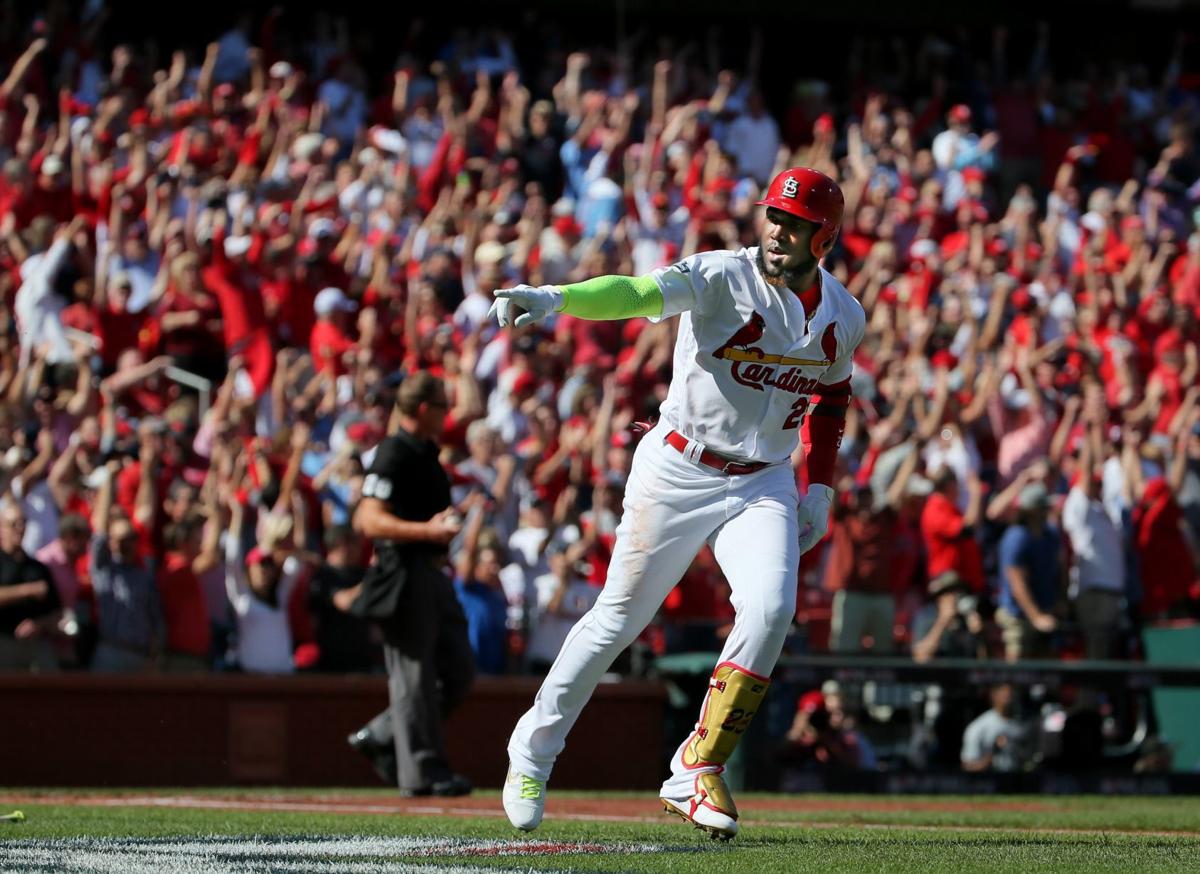 Marcell Ozuna homers for the Cardinals in Game 4 of the 2019 National League Division Series against Atlanta at Busch Stadium (Post-DIspatch photo by David Carson). 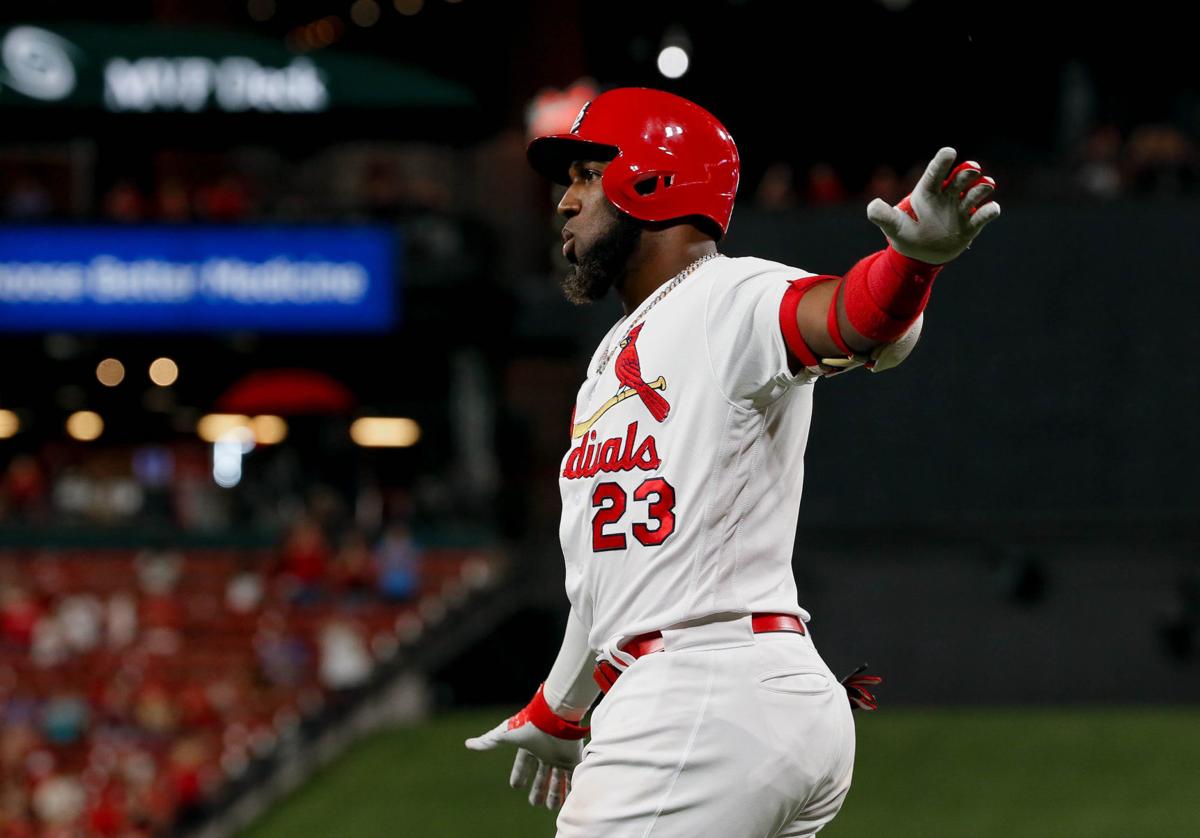 St. Louis Cardinals left fielder Marcell Ozuna celebrates getting to first base during a game between the Miami Marlins and the St. Louis Cardinals at Busch Stadium on Thursday, June 20, 2019 in St. Louis. Photo by Brian Munoz, bmunoz@post-dispatch.com 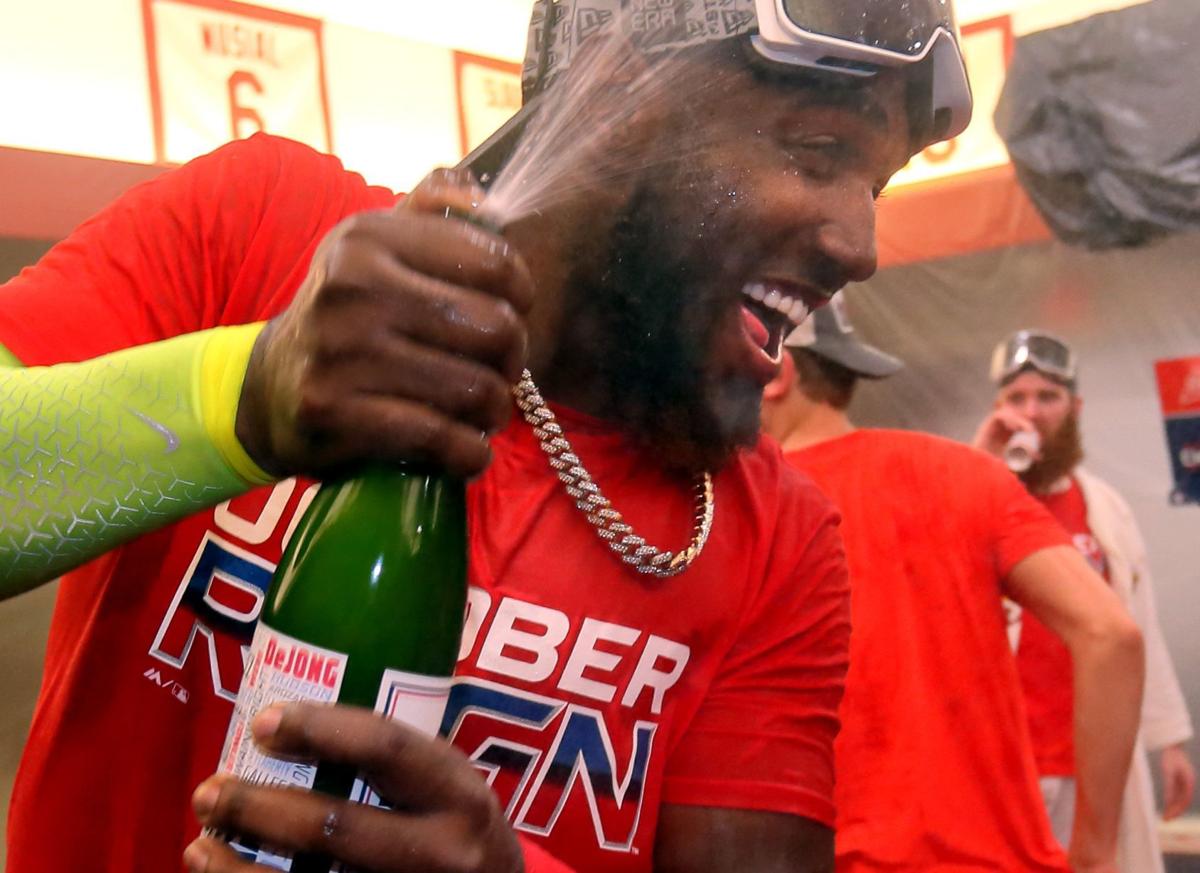 NORTH PORT, Fla. — If he knew then what he knows now, Atlanta Braves cleanup hitter Marcell Ozuna would have answered one of the Cardinals’ biggest questions of spring way, way, way back in mid-November.

In the Braves’ clubhouse early Thursday morning, hours before a game against his former team, Ozuna reiterated his wish to remain with the Cardinals for 2020 – and how in hindsight he would have accepted the one-year, $17.8-million qualifying offer presented him and been the Cardinals’ cleanup hitter. Instead, he’s on a one-year deal with Atlanta, out to thump his way to a larger deal next winter, and the Cardinals are auditioning a cleanup hitter, or four.

“If I knew before it was going to happen like this, I would have taken it,” Ozuna said. “But I wanted to make sure I had a chance (at a contract) for my career.”

Ozuna, 29, entertained a long-term offer from Cincinnati, and an official with the Braves said Thursday morning they would have discussed a long-term deal with him, too. Ozuna signed a one-year, $18-million deal that allows him to re-enter the free-agent market this coming offseason without the tagalong draft pick the Cardinals affixed to him. Ozuna said his agent remained in touch with the Cardinals “every time something moved.” Before accepting the Braves’ offer, Ozuna said his agent did circle back one last time to the Cardinals.

Their answer didn’t change – and what they told Ozuna’s representative was a lot like what Cardinals management said publicly: Their payroll was set. No room to add.

“If they offer a good offer, I would get it,” Ozuna said. “But they didn’t do it. … I thought the Cardinals were going to offer something (early), but they didn’t do that after I rejected the qualifying offer. So, I got patient. And I waited. And I talked to my agent a lot of the time. We were waiting – and then Atlanta was the team that gave me the opportunity for the one year and a good deal. I had to do that.”

Regardless of whether he re-signed with the Cardinals or with another team, Ozuna would not be eligible for a qualifying offer this fall, and he would be free of the draft pick Atlanta gave up to sign him.

The Cardinals acquired Ozuna in December 2017 from Miami as the Marlins divested themselves as of three of the best outfielders in baseball. A trade offer from the Cardinals was accepted by Miami for Giancarlo Stanton, but the reigning National League MVP used his no-trade rights to reject St. Louis and strongarm a trade to the Yankees. At the same time Miami notified the Cardinals of Stanton’s decision, president of baseball operations John Mozeliak pivoted the conversation to talk about a trade for Christian Yelich or Ozuna. Miami said they would engage in talks about Ozuna, not Yelich.

The Marlins told interested parties, like the Cardinals and Giants, and also Yelich’s representative that they did not intend to trade the future NL MVP. Come January, as Yelich readied for spring training in Florida, the Marlins reconsidered, shipped him to Milwaukee.

Ozuna spent two years with the Cardinals – each of them as their everyday cleanup hitter and each of them interrupted by an injury. He played both years with arm soreness that limited his throws from left field.

In two seasons with the Cardinals, Ozuna hit .262/.327/.451 for a .777 OPS. He had come to them off a career year with a .924 OPS, 37 homers, 124 RBIS and MVP votes in 2017 for the Marlins. Ozuna’s best season was his second season with the Cardinals as he had an .800 OPS with 29 homers and 89 RBIs. His OPS was among the highest for a team that scuffled offensively, and his power numbers were second only to Paul Goldschmidt’s. Ozuna’s advanced numbers – hard-hit rate, exit velocity – hinted at him being even better in 2020, especially as he put another several months between him and the fractured hand that cost him July. The number that mattered to Ozuna the most however came at the end of the season.

That’s how many playoff games he appeared in for the Cardinals – the first nine playoff games of his career. Ozuna raged in the division series against the Braves, batting .429 with two homers and five RBIs and an .857 slugging percentage. Five of his nine hits went for extra bases. Like the rest of the lineup, the Bear hibernated in the NL Championship Series with a .188 average and more strikeouts (eight) than total bases (four) against Washington.

“It was a good year because we made the playoffs and we competed in the playoffs, and that’s the most important as a player,” Ozuna said. “We fought to get there, and we got there. Luck – we did not have it in the second round. I wanted to be there to see what it is, what the playoffs are like.”

The two-time All-Star warmed to St. Louis as a home, especially in his second season and through October. Ozuna said he still talks to Yadier Molina on FaceTime several times a week, and he keeps up with Dexter Fowler and Yairo Munoz.

This past summer, Ozuna started wearing a Blues-themed tee shirt around the clubhouse, and he switched representation to have the same agent as catcher Molina. He urged his agent to try to get an extension with the Cardinals. His agent first approached them during the season, and then again immediately after the season. At the same time, teams like Cincinnati, Atlanta, Texas and the White Sox approached with interest. When Josh Donaldson signed with the Twins, the Braves turned to Ozuna as the bat they wanted to add. The Cardinals stood pat with their qualifying offer, and once it was rejected they moved on to sign free-agent Kwang Hyun Kim and start to peel outfielders off the roster via trade.

In the end, they valued the draft pick they would get in the top 100 this June ahead of bumping up the one-year offer to Ozuna. They’re betting they can get the same production he provided from one of their young outfielders, or a group of them, collectively.

“No, I’m not disappointed,” Ozuna said. “I feel like they did not give me the opportunity, so I had to walk away. It’s business.”

As sign-stealing scandal simmers, Shildt says MLB trying to get a grip on next 'gray area': the real sticky stuff

Cards manager says: 'The game has gotten more gray area. That’s what got the game in trouble. There’s no winner in the whole sign-stealing deal.'

Player just decided to leave team and return to Dominican Republic after being injured.

Both lefties, among 11 on the Cards' spring roster, are competing for a rotation spot while also making bids to be a reliever or even closer.

Cabrera impresses as Thomas, Williams, Miller back lefty with power in Cards' 7-5 win

Genesis Cabrera blitzes through two scoreless innings, strikes out two, and touches 96 mph with his sinker in his first Grapefruit League start.

Reyes 'electric' stuff enchants Cardinals, but his command will decide where and if he starts

Shildt says Cards have to entertain the idea that Reyes needs to make up for lost innings — and that could be in the minors.

Quick Hits: Goold on fans' frustration with front office, why Fowler will start in right, Reyes' shot at rotation spot

Could the Cardinals use an infusion of new blood in that front office? That's among the hot topics in baseball writer Derrick Goold's chat.

The conversation in the Cardinals’ clubhouse after a maddening loss in the NLCS was one that would echo into the winter.

Marcell Ozuna homers for the Cardinals in Game 4 of the 2019 National League Division Series against Atlanta at Busch Stadium (Post-DIspatch photo by David Carson).

St. Louis Cardinals left fielder Marcell Ozuna celebrates getting to first base during a game between the Miami Marlins and the St. Louis Cardinals at Busch Stadium on Thursday, June 20, 2019 in St. Louis. Photo by Brian Munoz, bmunoz@post-dispatch.com