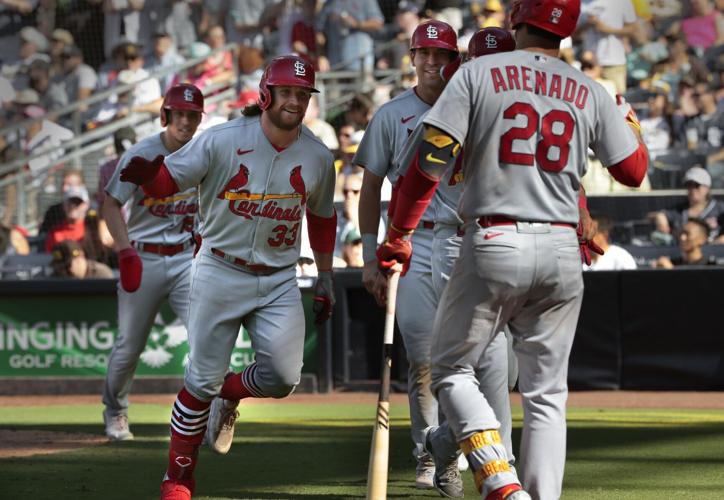 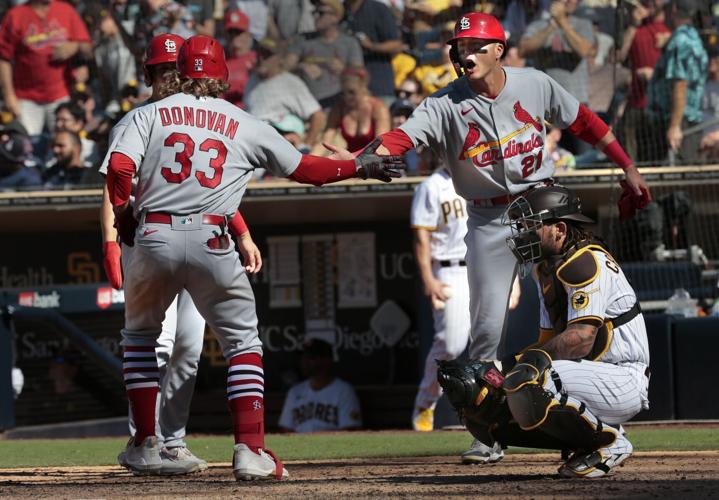 St. Louis Cardinals Brendan Donovan is congratulated by Lars Nootbaar, right and Tommy Edman after hitting a grand slam in the seventh inning, scoring Dylan Carlson, Nootbaar and Edman against the San Diego Padres on Thursday, Sept. 22, 2022 at Petco Park. The Cardinals won the game 5-4. Photo by Robert Cohen, rcohen@post-dispatch.com 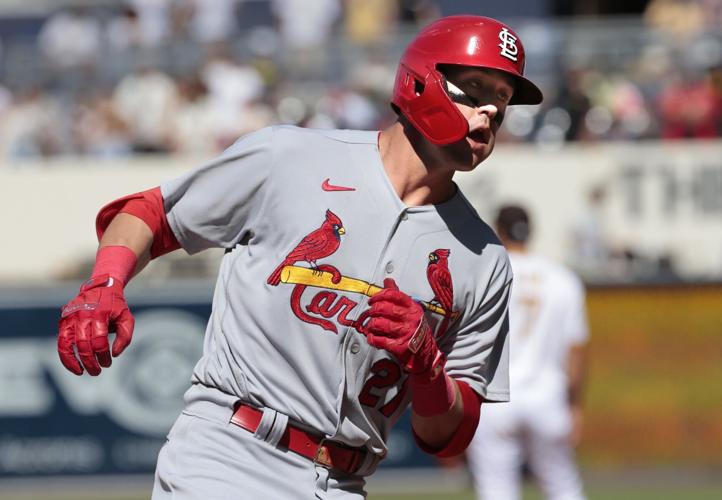 St. Louis Cardinals Lars Nootbaar rounds the bases after hitting a solo home run in the fifth inning against the San Diego Padres on Thursday, Sept. 22, 2022 at Petco Park. The Cardinals won the game 5-4. Photo by Robert Cohen, rcohen@post-dispatch.com

SAN DIEGO — The Cardinals had found a way to generate baserunners earlier in the game and even ended the long slog for that missing run with a solo homer.

It took a rookie to bring it all together.

Brendan Donovan blasted the Cardinals out of their offensive funk with a grand slam in the seventh inning to send them to a 5-4 victory Thursday against San Diego. Donovan’s first big-league grand slam helped the Cardinals to avoid a series sweep at Petco Park and gave them their first genuine outburst of runs in five days. Lars Nootbaar’s solo homer in the fifth inning ended the Cardinals streak of consecutive innings without an RBI or an earned run at 47.

Donovan’s homer got them the win.

Jack Flaherty bought time for the eventual rally with six steady innings that concluded with the strongest stretch of pitching by the right-hander in at least a year. Flaherty struck out nine and held the Padres to three runs, though two of which involved misplays on defense.

The Cardinals’ game-changing, week-altering, spirit-uplifting rally begam modestly enough with Dylan Carlson’s pinch-hit single. Nootbaar drew a walk to put the tying run on base and force the Padres into a decision. San Diego turned to right-hander Nick Martinez to put leadoff hitter Tommy Edman on the left side of the plate. He worked a full-count walk to load the bases. Donovan’s at-bat became a study in patience.

He ignored Martinez’s first three pitches, all of them balls.

He took a cutter he couldn’t punish for the first strke.

When he got the same pitch, Donovan launched it over the right-field wall to flip the game on the Padres. His hit was the first by a Cardinal to produce two or more RBIs since Yadier Molina’s homer in the third inning of Saturday afternoon’s game.

With the middle of the Padres’ order up in the eighth inning, closer Ryan Helsley handled it. He allowed a solo homer to Manny Machado that tightened the game to a run. Helsley then asserted command of the inning with raw velocity. His full-count fastball to Josh Bell was clocked at 104.0 mph – the fastest pitch thrown this season in the majors.

That left the ninth to Giovanny Gallegos. He pitched scoreless ninth for his 14th save of the same. The game ended with Paul Goldschmidt’s diving catch of a line drive down the first-base line.

In a bind, Flaherty at his best

That sixth inning he wanted to pitch, Flaherty had to earn by evading a dicey fifth.

Due to an error and a double, San Diego already had a run in the fifth before Flaherty had an out. He further complicated his inning by walking No. 3 hitter Manny Machado. An inning that could capsized on him and ended his start instead became a stage for his finest sequence of the season.

Flaherty struck out cleanup hitter Brandon Drury on three pitches. He darted a 96.3-mph fastball past the former Red for the swing and miss. Machado strolled into second with a stolen base to put two runners in scoring position for left-handed hitter Jake Croneworth. A single and the Padres’ lead would have widened to four runs, and the run the Cardinals finally delivered would have been vaporized by a mess in the bottom of the fifth inning.

With his start in the balance, Flaherty began the at-bat with a fastball. Cronenworth fouled it off. Flaherty followed with a slider to get ahead 0-2 with a called strike. After missing with a slider, Flaherty snapped a curveball and Cronenworth went fishing. The 80-mph pitch skipped in the dirt and Andrew Knizner tagged Cronenworth to end the inning.

In the sixth inning for the Cardinals for the first time in 13 months, Flaherty retired the side in order. He struck out the final two batters he faced to finish with nine. He had not had that many strikeouts in a start since May 31, 2021. Flaherty punctuated his start with a 96.9-mph fastball past Trent Grisham for the final out of the sixth.

Flaherty’s second pitch of the game gave San Diego the first lead of the game.

Jurickson Profar drilled his fourth career leadoff home run on a fastball that Flaherty leaked over the middle of the plate and slightly less than 92 mph. Profar pounced for his third leadoff homer of the season and 15th home run of the season. Two pitches into the game and San Diego had more runs than the Cardinals had in their previous 28 innings, combined.

The Padres doubled that lead in the second inning on a single to center field from Luis Campusano. Josh Bell wheeled around third to race Nootbaar’s throw home. The ball hit the mound and bounded high enough to be out of catcher Andrew Knizner’s reach and above Bell’s arrival at home. Nolan Arenado’s fielding error in the fifth inning put the runner on base for San Diego’s third run.

Two of the three runs Flaherty allowed involved an error of some type.

With his final two swings of BP, Nootbaar hit two baseballs into the seats that were close enough to each other that the same fan tracked them down.

The ball that ended the Cardinals’ scoreless skid followed that same route.

Nootbaar led off the fifth inning with a solo homer for his 13th homer of the season and the Cardinals first run in four days. The Cardinals had gone 31 consecutive innings without a run, and Nootbaar’s homer was their first RBI and first earned run created since the third inning of Saturday’s afternoon game.

The Cardinals are looking to avoid a sweep in San Diego Thursday and something even more unnerving — a fourth consecutive shutout.

Cardinals notebook: Dakota Hudson set for ‘meaningful role,’ but which one is TBD

SAN DIEGO — On the first day he was eligible to return to the active roster, the Cardinals added Dakota Hudson to the pitching staff.

Cardinals, Goldschmidt, and Pujols lead majors in several offensive categories against lefties, but it was San Diego's Snell who found a way to contain them in May.

Juan Yepez returns to the majors, joins team in San Diego, and will be a right-handed option as manager Oliver Marmol plots outfield trios by matchup.

St. Louis Cardinals Brendan Donovan is congratulated by Lars Nootbaar, right and Tommy Edman after hitting a grand slam in the seventh inning, scoring Dylan Carlson, Nootbaar and Edman against the San Diego Padres on Thursday, Sept. 22, 2022 at Petco Park. The Cardinals won the game 5-4. Photo by Robert Cohen, rcohen@post-dispatch.com

St. Louis Cardinals Lars Nootbaar rounds the bases after hitting a solo home run in the fifth inning against the San Diego Padres on Thursday, Sept. 22, 2022 at Petco Park. The Cardinals won the game 5-4. Photo by Robert Cohen, rcohen@post-dispatch.com