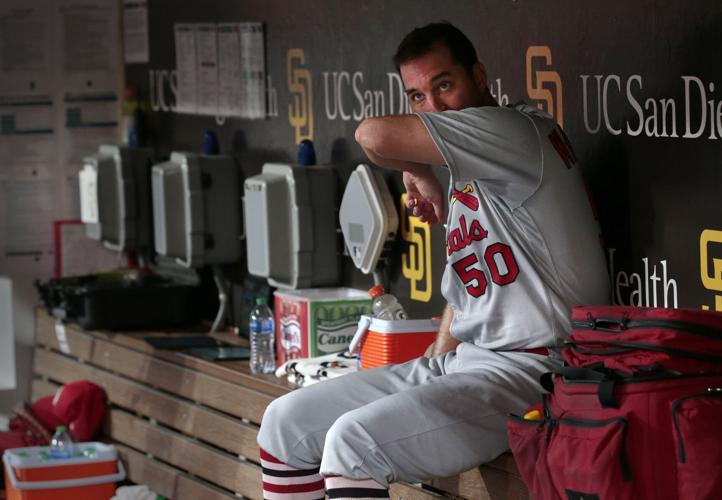 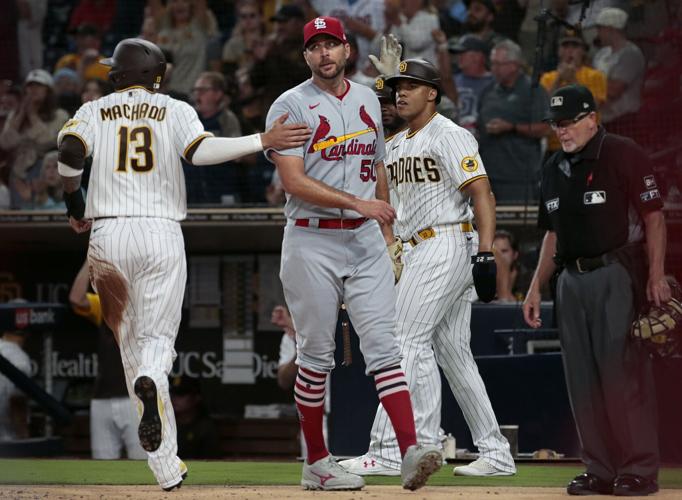 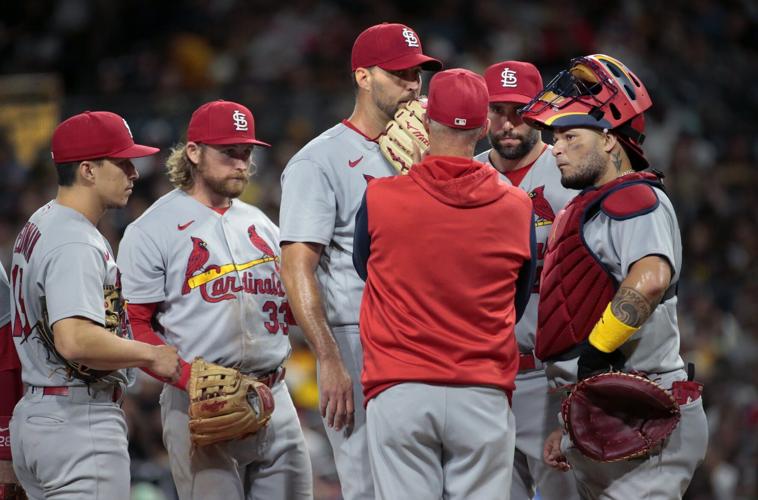 Cardinals pitching coach Mike Maddux visits the mound with pitcher Adam Wainwright, catcher Yadier Molina and the team's infielders in the fifth inning against the Padres on Tuesday, Sept. 20, 2022, at Petco Park in San Diego. 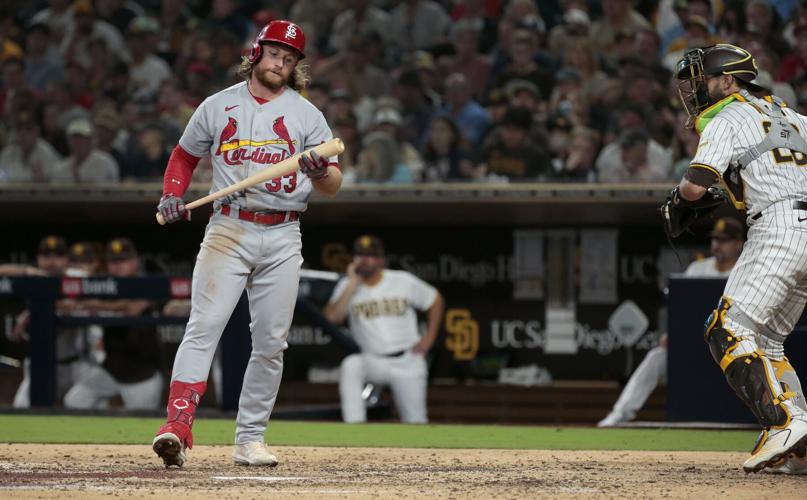 SAN DIEGO — Whether it was the finish on his curveball or that late, sharp, serrated bite on any of his fastballs, Adam Wainwright found it all lacking Tuesday night and pronounced later that, no, his arm has not been completely reanimated from its “dead” phase.

The Cardinals’ offense can empathize.

As the postseason appears out there on the horizon through the haze of their current performance, the Cardinals have their lead starter groping for the life on his pitches and a lineup that cannot find a pulse. Wainwright got closer to winning his “battle” with a strong sixth inning to cap a start that even flawless would not have been enough to hide the absent offense. The Cardinals were shut out for the second consecutive game and have gone 34 innings without producing an earned run.

For the fourth time in a week, the Cardinals were scrambling to produce a hit in the first half of game before losing, 5-0, to San Diego late Tuesday at Petco Park.

“We’re just not putting together quality at-bats,” said Oliver Marmol, whose first-place team had its magic number dip to six due to Milwaukee’s loss. “We’ve gotten to this position where we’ve built a cushion because we’ve slugged our way there. Our offense has done a really nice job to do that. And now we’re going through a point where we’re going to have to battle through it. Is it ideal? No. Will we come out of it? Yes.”

The last RBI the Cardinals had came on Yadier Molina’s home run in the third inning of Saturday’s afternoon game. That evening, the Cardinals scored the only run of the game in the 11th inning on a Cincinnati error. Since? Eighteen consecutive shutout innings and a grand total of 13 baserunners in 65 at-bats.

The autumnal chill from the Cardinals’ offense has happened as suddenly as it has completely – like a muscle car accidently fed diesel.

With the engines seizing, it’s sputtered to a stall.

Paul Goldschmidt had the Cardinals’ lone extra-base hit Tuesday and Nolan Arenado added a single, but since the start of September they’re a combined 27-for-120 (.225). Look no further for their influence on games than how the Cardinals have started them. The Cardinals haven’t scored a run in the first inning in eight days, and they have only one first-inning base hit – a single – their past seven games. The Cardinals are batting .155 in the first five innings of their past six games, including five against pedestrian Cincinnati.

“I’m aware. I feel it,” Marmol said. “I don’t think there’s anything of substance to (the trend). Here’s the reality of it: Your two big boys will get going here soon. We’ll feel good about it. All of these guys were hot at the same time. It allowed us to build a cushion that we have right now, but it’s frustrating because you feel what you just said as far as not getting anything going on the starter. So, yes, super-aware of it. But not overly concerned. We’ve got to figure out a way out of it.”

That could begin with how they got into it.

The Reds arrived in St. Louis for five games in four days with one wildly impressive rookie starter in Hunter Greene and his 102-mph fireball and a lot of sleight of hand.

Other than Greene’s dominant outing, the data-fueled Reds tested and teased the Cardinals with a lot of off-speed stuff. One of the starters in that series, Chase Anderson, threw more changeups than any other pitch. The Reds were able to tie up the Cardinals’ timing – and the offense’s decent began. They’ve been caught in yo-yoing as a group since Greene sped them up, the other Reds slowed them down. On Tuesday, San Diego’s happy-footed right-hander Mike Clevinger got ahead with his fastball and the deception created by his twitchy delivery. He got a dozen swings and misses from the Cardinals, seven of them on fastballs. Through four innings, Clevinger threw out of the stretch during only two batters.

The first time the Cardinals got two baserunners against him was also the last two batters he faced, and both runners came with two outs.

The inning fizzled with neither Cardinal moving.

“The bottom line: We haven’t generated traffic,” Marmol said. “We haven’t gotten the big hit. We’re not walking at the same rate we normally would. All aspects of the things we were doing well all at once haven’t been there.”

For four consecutive starts, Wainwright has not had the same crackle to his pitches. He saw a drift in his velocity Tuesday as he sidestepped trouble of various degrees. In the first inning, he didn’t get a call on a pitch that triggered a leadoff walk. Juan Soto followed with a single on an outside pitch that went against the shift and dribbled toward left field. Before Wainwright had an out, the Padres had two runners on and MVP candidate Manny Machado up. Wainwright was able to calm the inning with two quick outs before he did not get the late life on an elevated pitch. That meant it wasn’t elevated enough.

Jake Cronenworth flipped it to left for a two-run single.

Wainwright hung a curveball that Ha-Seong Kim pulverized for a solo homer, and in the fifth it was back to the just-miss pitches. A pitch meant to be in on Machado’s hands did not snap. That gave Machado enough to loop it to shallow center for an RBI single and the fourth of four runs against Wainwright (11-10).

That came in his sixth and final inning.

Unable to lobby for a sixth inning in either of his previous three starts this month, Wainwright got it Tuesday. His only strikeout of the game came from the first batter – on a full-count changeup – and then he got quick weak fly balls to finish the sixth inning. It was his best inning. After the game, Wainwright said these stretches of sogginess from his arm or slippery mechanics comes in three starts, maybe four, “but it’s never gone five before.” His next start, at Dodger Stadium, will be his fifth start of September.

He senses his pitches starting to perk up.

Photos: All eyes on Albert as Cardinals fall 5-0 to Padres in San Diego

Jack Flaherty had a standout finish to six strong innings and the Cardinals edge the Padres, 5-4, and end scoreless streak with homers from Nootbaar, Donovan.

The Cardinals open their west coast road trip, sending Adam Wainwright to the mound to take on the San Diego Padres.

With two weeks to go, 15 of the 30 major league teams are under .500. Thirteen of them absolutely have no chance for postseason play.

Blake Snell takes a no-hitter into the seventh inning before Albert Pujols snaps it with a ground-ball single. Pujols has three of Cardinals six hits in two shutouts.

Cardinals pitching coach Mike Maddux visits the mound with pitcher Adam Wainwright, catcher Yadier Molina and the team's infielders in the fifth inning against the Padres on Tuesday, Sept. 20, 2022, at Petco Park in San Diego.