After a year in the position that has become a steppingstone from the Cardinals dugout to a promotion, Skip Schumaker was named the Miami Marlins’ new manager Tuesday, and his departure offers a glimpse into what could be several changes coming to Oliver Marmol’s staff in St. Louis.

Schumaker is the fourth consecutive Cardinals bench coach to move from that role to being a rookie manager for a major-league club. The former Cardinals leadoff hitter and a World Series champion in 2011 with the club that drafted him, Schumaker leaves after one year on Marmol’s coaching staff to become the 16th manager in Marlins history.

He will still report to spring training in Jupiter, Florida.

He’ll just be on the other side of the Roger Dean Stadium complex.

“Delivering a winning, sustainable culture with the expectation of getting into the postseason is the next step for this organization and South Florida,” Schumaker said in a statement provided by the team. “And I can’t wait to get started.”

From the day they hired him for a return to St. Louis, the Cardinals were prepared for the possibility of Schumaker's quick departure to be another team's manager.

"We are happy and proud of Skip getting this opportunity," said John Mozeliak, president of baseball operations. "Miami is getting a qualified manager who will bring his own personality to this job. He is organized, thoughtful, progressive and ready for this job."

The Cardinals have been in the process of finalizing their leadership and coaching staff for the coming season. Earlier this month, the Cardinals awarded multiyear extensions to general manager Michael Girsch and assistant general manager Randy Flores. The Cardinals now have an opening for bench coach as Marmol begins his second year as manager.

And other notable changes to Marmol’s staff are possible.

Pitching coach Mike Maddux's contract is set to expire, inviting the question on whether he'll return after serving in that role for five seasons and three different managers. There is the possibility the Cardinals will explore other candidates at pitching coach. The team must also address hitting coach Jeff Albert’s current contract and the makeup of the group of hitting coaches.

The Cardinals have several internal candidates to replace Schumaker as bench coach, including first-base coach and infield guru Stubby Clapp. Third base coach Ron “Pop” Warner handled the bench-coach duties during Schumaker’s late-season absence, but Warner has also expressed his fondness for coaching third base. Class AAA Memphis manager Ben Johnson is highly regarded within the organization for what he’s done with the Redbirds and readying the parade of rookies the Cardinals have leaned on for several seasons. He could be a candidate for coaching positions opened by any other shuffles.

Matt Holliday, recently inducted into the Cardinals Hall of Fame, is close with Marmol, and he has had previous talks about a role with the organization.

The Cardinals plan to further detail their early offseason plans and discuss any decisions on the coaching staff with the media Wednesday.

When the Cardinals lured Schumaker back to St. Louis to be Marmol’s bench coach, they did so knowing he was viewed as a rising talent on his way to being a manager. They structured his contract as a series of options so that Schumaker could return to Southern California if the time away from his family was prohibitive or if there was an opportunity to pursue a role closer to home. Or, of course, a manager position was offered. Schumaker planned to return to the Cardinals for 2023 until being approached about the opening in Miami.

The Marlins conducted an expansive search for Don Mattingly’s replacement after the former MVP’s seven years at the helm. Schumaker’s candidacy generated momentum quickly after an initial interview.

“As we continue to grow as an organization, we felt it was important to find an individual who had been a part of a winning culture,” said Kim Ng, Marlins general manager, in a statement from the club. “Having been a member of two championship teams, along with his reputation for tenacity and getting every ounce out of his ability, Skip will be a tremendous example to our players. His leadership style, teaching skills and attention to detail make him the clear choice as the club’s new manager.”

A fifth-round pick by the Cardinals in 2001, center fielder Schumaker was part of the generation of minor-leaguers that included Yadier Molina and Adam Wainwright, all three of them arriving in the majors during the 2004 and 2005 seasons. Schumaker appeared in 28 games in 2006 with the Cardinals, who went on to win the World Series that season. By 2008, Schumaker was a regular with a .302 average and a .359 on-base percentage. By 2009, he was a second baseman. To keep his bat in the lineup and clear the way for another outfielder, Schumaker learned the new position on the fly at the highest level, often with coach Jose Oquendo using a pitching machine to fire 100 mph ground balls at him.

He spent parts of four seasons at second base for the Cardinals, starting at both second and center for the Cardinals during their 2011 title run. Schumaker had the game’s only RBI in the Cardinals’ 1-0 victory to clinch the National League Division Series in Philadelphia the night Chris Carpenter pitched a shutout.

Traded to the Dodgers after the 2012 season, Schumaker also spent two seasons with Cincinnati before retiring while in spring training with San Diego in 2016. The Padres offered him a role with the organization, and that grew into a coaching position. He spent time as first base coach and associate manager while joining the industry’s shortlist of likely future managers.

In his return to St. Louis, Schumaker had a quick rapport with Marmol — as a sounding board during games, as logistics expert for workouts and meetings, and as a confidant for strategy discussions, lineup decisions, potential roster moves, and game reviews.

He takes over a team that has a bona fide ace in former Cardinals prospect Sandy Alcantara and an uphill slog in the National League East against the big-spending New York Mets and the past two winners of the NL pennant, Atlanta and Philadelphia. Not to mention the struggles the Marlins have energizing the fan base and drawing crowds.

The Marlins have been to the postseason once since winning the World Series in 2003, and they have not had a winning record in a full season since 2009. They’ve twice won a championship in club history but never finished first in a division.

“Skip has a long list of distinguished accomplishments as both a player and a coach that showcase the remarkable individual he is as well as the high level of credibility and leadership he will bring to the dugout and the Marlins’ organization,” chairman and principal owner Bruce Sherman said in a release. “He has an incredible passion and winning spirit that will set the course for the Marlins franchise.”

Goold: A power bat, preferably an outfielder, should be at top of Cardinals' shopping list

Wainwright, 41, will return for an 18th season, his first without catcher Yadier Molina. He'll have the chance to chase 200 career wins.

Not many saw Cardinals prospect Moises Gomez's breakout season, including Gomez himself

Mozeliak details offseason needs, says he shared plans personally with Nolan Arenado, who must decide soon if he'll opt out or remain with Cardinals. 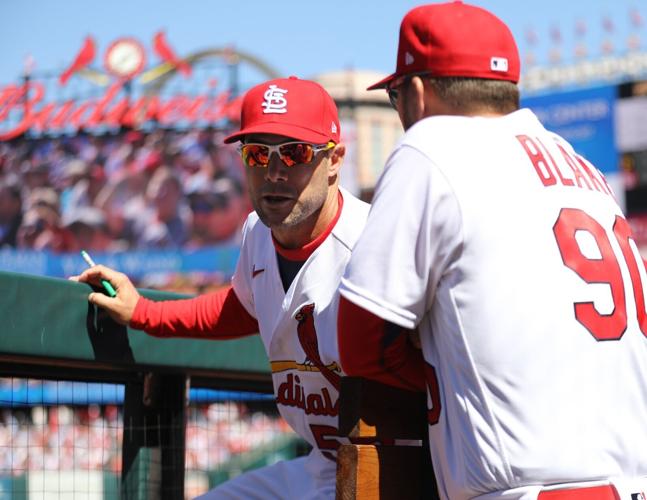 Cardinals bench coach Skip Schumaker, left, talks to pitching coach Dusty Blake on Saturday, April 9, 2022, while acting as manager in the absence of Oliver Marmol during in a game against the Pittsburgh Pirates at Busch Stadium in St. Louis, Mo. Photo by Christian Gooden, cgooden@post-dispatch.com 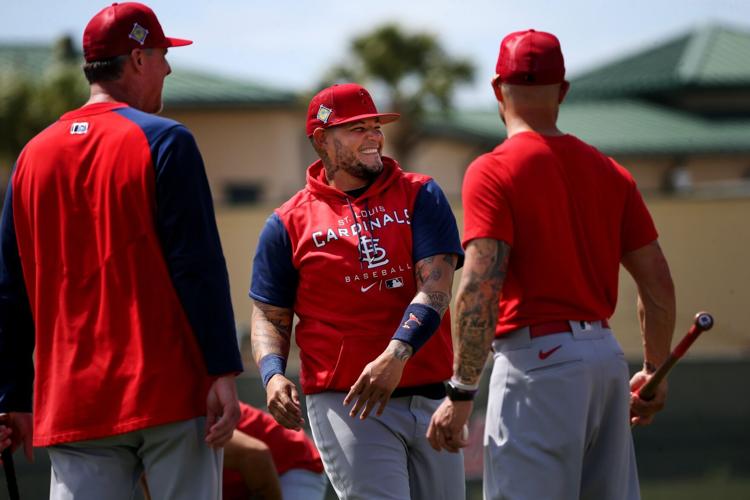 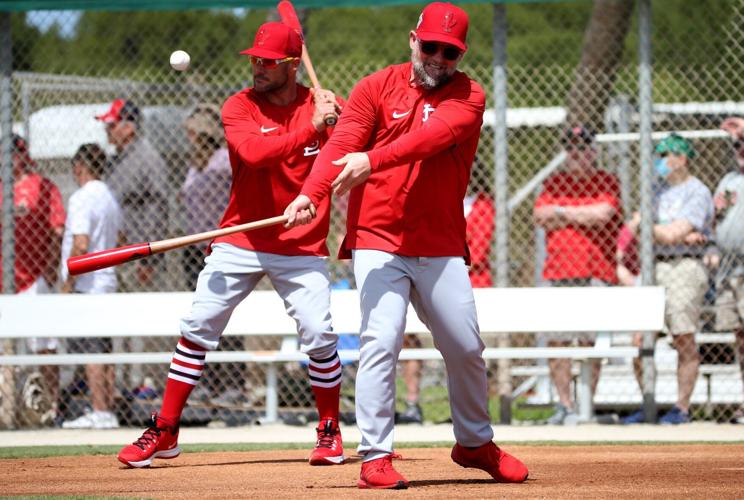 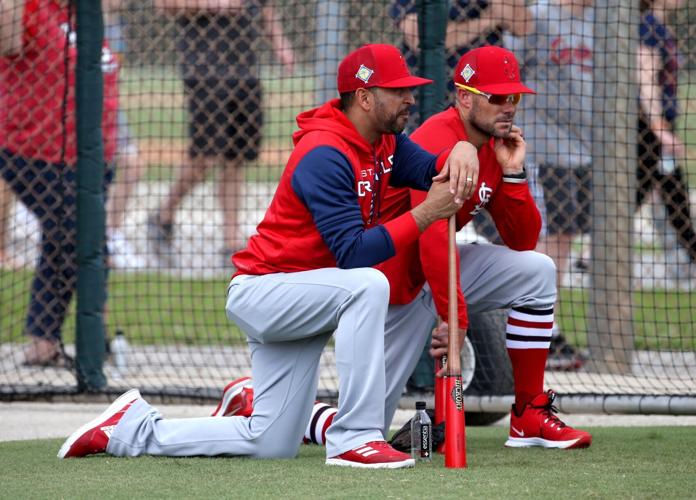 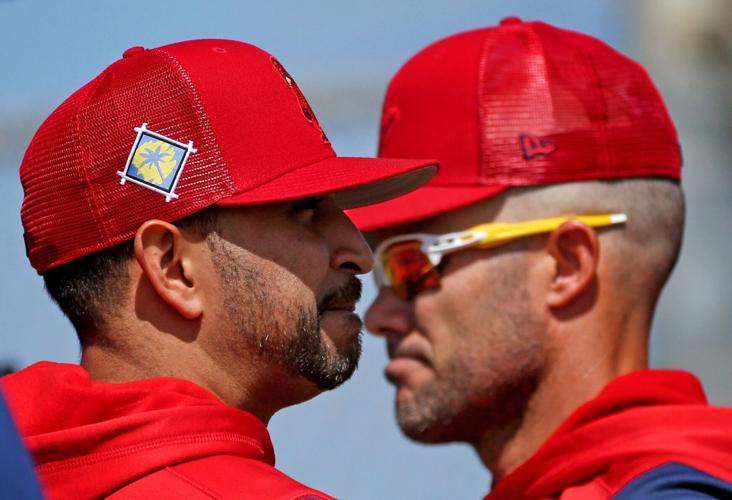