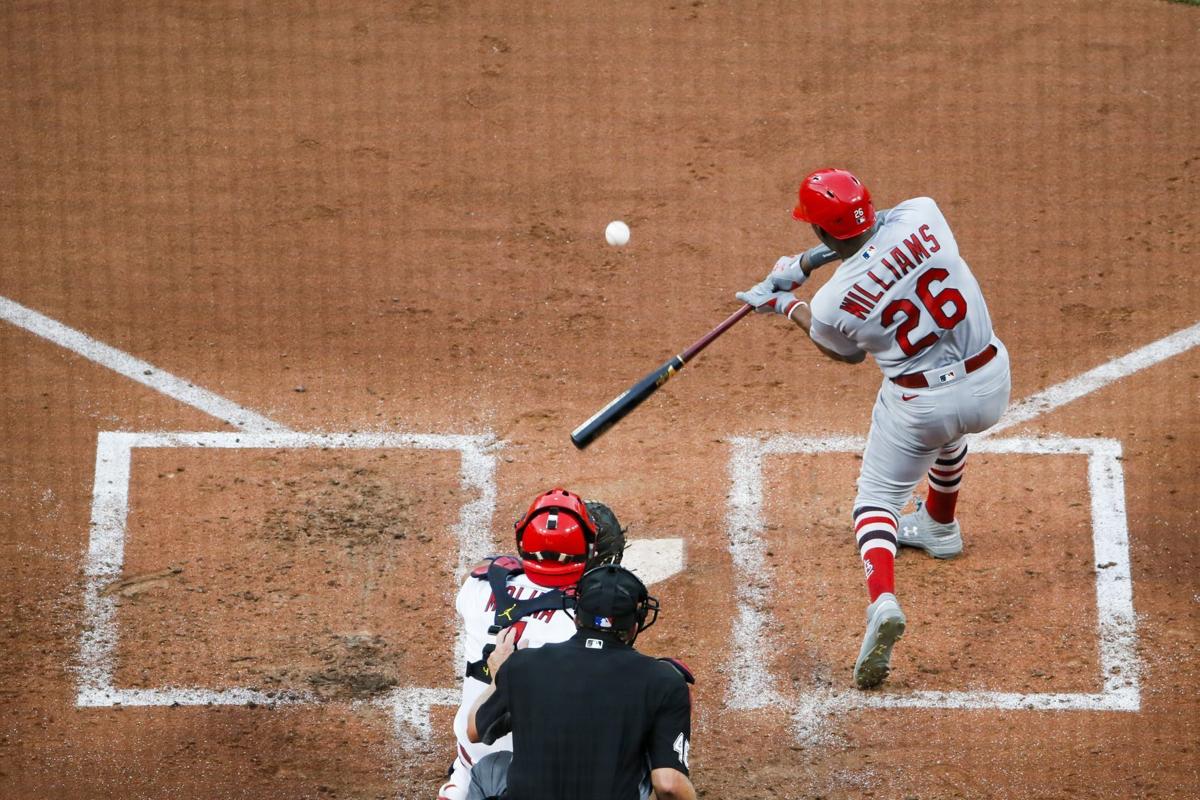 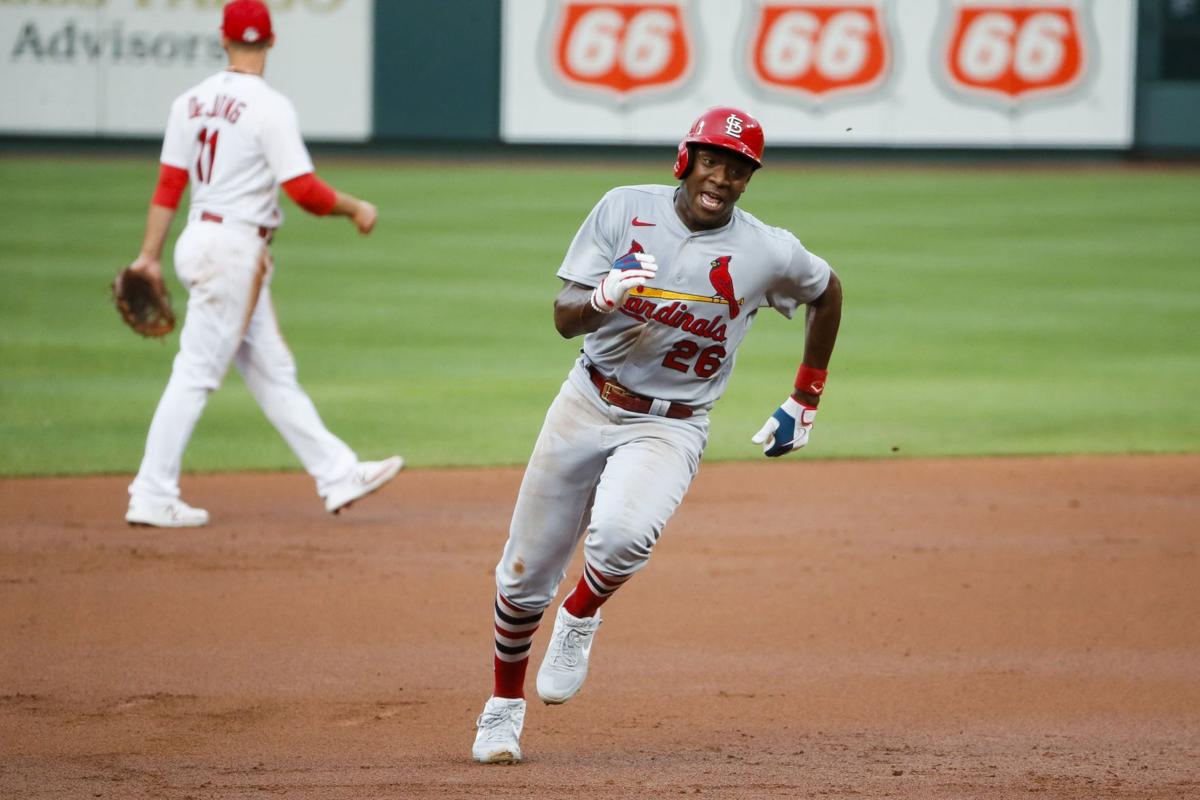 Cardinals outfielder Justin Williams advances to third base on a teammate's hit during the July 17 intrasquad game at Busch Stadium. (Post-Dispatch photo by Chris Kohley)

JUPITER, Fla. – With less than a month to go before the opener in Cincinnati, a significant roster decision hinges on a ruling the Cardinals have been waiting on for weeks and the commissioner’s office final definition on whether 60 games equal 90 days in 2020 math.

As mentioned briefly in Tuesday’s story about the Cardinals’ outfield option, Justin Williams may or may not have an option year remaining for 2021.

The Cardinals and the player still do not know.

They are not alone.

And this is only the beginning of these issues.

Williams, who is starting in right field Tuesday afternoon against Miami, is one of several players in the majors this season who may be eligible for a fourth option year. Major League Baseball and the union must agree with the teams that last season’s shortened schedule does not count as a full season because it falls shy of the required 90 days. That decision, which is before an arbiter along with other service time disputes, is expected in mid-March, according to an MLB official.

The ruling has roster ramifications and could be the difference for the Cardinals between carrying 14 pitchers or 13 on the 26-man roster into the regular season.

It also will shape the Cardinals’ bench, because if Williams has run out of options that assures his lefthanded bat a spot, so the team does not lose him on waivers.

Williams, 25, made his major-league debut on July 21, 2018, during a brief callup with the Tampa Bay Rays. He has appeared in that one game and three more in 2020 with the Cardinals, and yet the outfielder from Houma, La., has exhausted his three option years. Every player gets at least three option years when added to the 40-man roster. No matter how many times a player is promoted or demoted to the minors, one option covers the entire season. Williams was first added to Tampa Bay’s 40-man roster in November 2017.

Some players become eligible for a fourth option year through two primary avenues. Several years ago, Mitchell Boggs had a fourth option year added because he had spent less than 20 days on an option to the minors. The Cardinals gave Boggs the service time and salary he would have earned in the majors, and in return got that option restored as if it the demotion never happened.

The other – well, Williams’ eligibility for a fourth option year is trickier.

According to MLB rules: “Players typically have three option years, but those who have accrued less than five full seasons (including both the major and minors) are eligible for a fourth if their three options have been exhausted already. For the purposes of this rule, spending at least 90 days on an active Major League or Minor League roster during a given season counts as one full season.”

It's Rule 7(c) that prescribes what is a "season of service."

By that definition, Williams’ career has been bookended by incomplete seasons.

While salaries were prorated for the 2020 season, a full season of service time was given to players who spent the 60-game schedule in the majors. Service time overall was prorated, but that same agreement does not automatically apply to whether the season is, by definition, "full" if it didn't reach 90 days.

That's the question teams are asking as they seek to get a fourth option year for prospects and roster space.

This has ripple effects galore for minor-leaguers who shuttled between the alternate-site camp and the majors, for teams had to revise their roster on the fly due to COVID-19 outbreaks or doubleheaders, and so on. That means the precedent set this spring will also apply for more players who will be in this spot for 2022 and possibly 2023. Cubs pitcher Adbert Alzolay is another player awaiting the same word as Williams, as are Reds players Aristedes Aquino and Jose De Leon. Colorado's Chi Chi Gonzalez is also in this limbo, awaiting word on his option status. Are they eligible for a fourth option year, or not? Do they have a spot assured them in the majors, or does the team have the option to send them to the minors?

Like the universal designated hitter or expanded playoffs, teams will find out when they find out and adjust accordingly. The decision matters for the Cardinals this year and for Major League Baseball for years to come.

This year's alternate-site camp, housed last year at Springfield, Mo., will be focused on helping the major-league team, populated with a roster similar to the one planned for Triple-A Memphis.

'We've cleared the deck': Cardinals clearly hinting who will catch on in the outfield, if offense can catch up

Bader, O’Neill and Carlson seem to be ahead — for now.

Bring your Cards questions and comments to a live chat with Derrick Goold at 1 p.m. Monday.

BenFred: The Edman-Carpenter-Gorman discussion makes for one fascinating Cards cause-and-effect

Compared to the clearly defined competitions for the rotation and outfield, this one is much more intriguing

Back in the ballpark for the first time in 354 days, fans rise to greet Arenado in Cardinals debut

”It was awesome,” says Cardinals newcomer.

Leading man: Cardinals' search for offensive spark starts at the top, auditioning for new No. 1

Unwilling to disclose who will hit first as Grapefruit League play begins Sunday, Shildt's comments and Cardinals actions hint Tommy Edman will get a long look at leadoff.

As his personal “minister of culture,” Cardinals shortstop Paul DeJong’s agent gave him a list of classic movies to watch during quarantine, t…

Cardinals outfielder Justin Williams advances to third base on a teammate's hit during the July 17 intrasquad game at Busch Stadium. (Post-Dispatch photo by Chris Kohley)