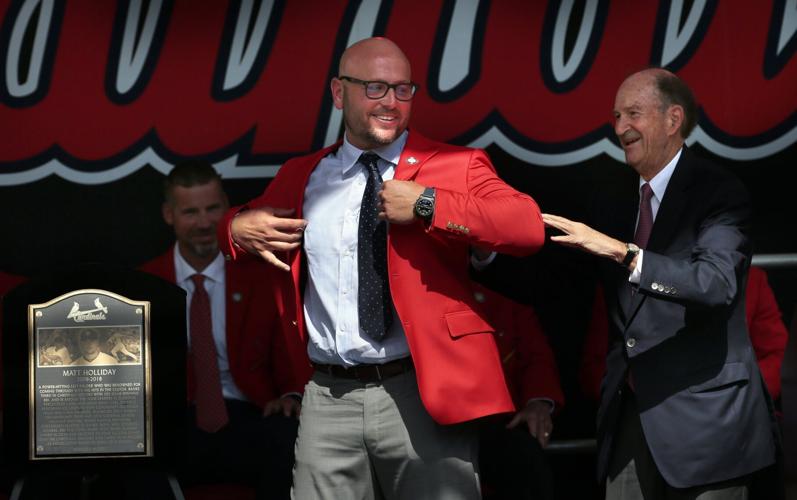 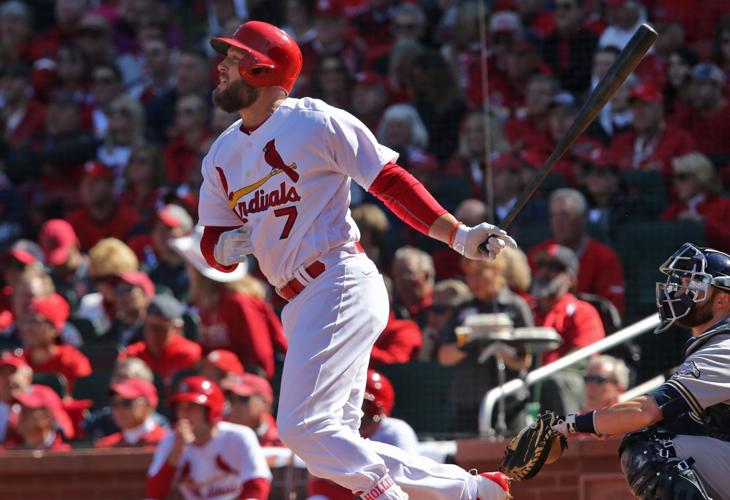 The Cardinals' Matt Holliday doubles in the first inning, driving in Jeremy Hazelbaker, on opening day at Busch Stadium on Monday, April 11, 2016.

HOUSTON — With his two oldest sons playing together for their only year together as Stillwater Pioneers, batting second and third in the Oklahoma high school’s lineup, there was no chance Matt Holliday was going to be lured away from the amateur ballfields a year ago, no matter how much the Cardinals tried.

But as Holliday mapped his return to major-league baseball as a coach he recognized whenever he decided to make that jump it was going to mean time away family.

There was no perfect time.

So it had to be the perfect fit.

The Cardinals offered that last week and officially named Holliday their bench coach Sunday. He replaces his former teammate and good friend Skip Schumaker. Holliday joins the staff run by a close friend, manager Oliver Marmol, and an organization that just a few months ago inducted him into its Hall of Fame, red jacket and all. The four previous people to hold the role of Cardinals bench coach have gone on to become managers, the Miami Marlins in Schumaker’s case.

“When I think about what am I going to do with the passion I have for coaching and the passion I have for leading and being around people, what does that look like?” Holliday told the Post-Dispatch on Sunday morning. “This is just such a great opportunity in a lot of ways because I know Oli, Oli is a close friend, and obviously my relationship with the Cardinals organization. Knowing all that I do, it’s just a unique opportunity. I can’t pass it up.”

The role of bench coach shifts and adapts to the manager and the personality of the personality of the person who holds it. Because of what Marmol called Holliday’s “passion for the offensive side,” the former batting champ will have a role with the hitters. He’ll also be a liaison between the manager and the clubhouse, and he’ll serve as a sounding board during games. Marmol used Schumaker as an ear for frustration and a challenger to his thinking.

The scope of the role intrigued Holliday more than pursuing a job as hitting coach, and that’s partially because he wants to learn if being a manager should be a goal, as it was for Marmol and Schumaker, the Cardinals’ previous two bench coaches.

“For me, that’s the most intriguing spot because I like a lot of the strategy and being a part of learning whether or not managing someday would be something I’d be interested in,” Holliday said. “Being able to help in a lot of different ways and not just be in the (batting) cage. You really have to be committed to being in the cage hours on hours. Not that I’ll shy away from that, but I look forward to what else I can bring.”

The Cardinals revealed Sunday the entirety of Marmol’s staff for his second season as manager. Two members of this year’s staff, Dusty Blake and Turner Ward, were promoted to pitching and hitting coach, respectively.

Blake, 40, replaces widely respected pitching coach Mike Maddux, who elected not to return as he sought a different role and pace from years of travel. Blake came to the Cardinals from Duke for a new position, pitching strategist, and was entrusted in advancing the use of analytics for pitch use, pitch development and pitchers. A former college pitcher, Blake became a trusted voice for pitchers as they looked to understand the statistical underpinnings of what made their pitches work.

“I think we’re going to look back at this move three to five years down the road and we’re going to have one of the brightest pitching minds in the game on our side,” Marmol said. “This is a very skilled individual who is going to help us on the pitching side get to where we need to get to.”

Ward, a longtime coach and confidant of Cardinals first baseman Paul Goldschmidt, joined the team as assistant hitting coach for 2022 when the team sought a former player and longtime hitting coach to connect with the offense. Ward, 57, quickly earned the trust of the hitters for how he was able to relate to them.

Ward will replace Jeff Albert, but there will be a continuum of Albert’s influence on the organization and the infrastructure he helped construct for hitting approach and tech. Brandon Allen, Class AAA Memphis’ hitting coach this year, will join the major-league staff as assistant hitting coach and maintain that connection the organizational approach that helped launch Brendan Donovan, Alec Burleson, Nolan Gorman, and Juan Yepez to the majors this past summer.

To Blake’s staff, the Cardinals brought Julio Rangel from the Boston Red Sox to be assistant pitching coach (bullpen), a new title for the bullpen coach role. Rangel has been the Sox pitching coordinator the previous two seasons and Marmol said Rangel’s ability to connect with the Latin pitchers and young pitchers in the bullpen will “close the gap in some areas.”

Holliday's contract will be similar to Schumaker's when finalized: It will have a three-year structure but after 2023 the years will be mutual options.

Holliday’s friendship with Marmol goes back to their days together as a Cardinals, when they met during the weekly spring training Bible studies. Both the Hollidays and Marmols lived year-round in Jupiter, Florida, and many nights the families were together at Holliday’s home.

“We spent a lot of nights talking baseball,” Holliday said.

Since then, he’s been part of his brother Josh’s coaching staff at Oklahoma State. That allowed him to be close as oldest sons, Jackson and Ethan, became some of the top prospects in their age group. Last June, Jackson, a shortstop, was drafted first overall by Baltimore. The Cardinals play Baltimore in their spring-training finale, allowing the Orioles to give the Hollidays a chance to share the same field as pros for the first time.

“The reality is he walks inside the clubhouse and has immense about of credibility because of his playing career, what he was able to accomplish,” Marmol said. “He checks a lot of the boxes we were looking for in that position. And, thankfully, he’s also someone who I really, really like as well.”

This past summer, Cardinals fans voted Holliday into the team’s Hall of Fame, fitting him for a red jacket and annual visit to the opening-day festivities.

He’ll be there this year in a working capacity, wondering if the jacket fits over the jersey.

Everything else is already a fit.

“Being a part of a group of people who have a goal and knowing that the goal is difficult — winning a world championship is difficult,” Holliday said. “As a coach, as a player what drives you is to contribute to a championship environment. You hope that you can bring something to the table that will enhance the group. That’s the goal for me now as a coach — you want to be able to pass along what you’ve learned to contribute to the success of this group.”

A total of 131 players became free agents at the conclusion of the World Series, and teams will have until Thursday to re-sign players before the market opens to all bidders.

The filing of retirement paperwork last week by Yadier Molina and Albert Pujols mean the Cardinals had only two players on the roster become free agents: pitcher Jose Quintana and outfielder Corey Dickerson.

Quintana, the Cardinals’ starter in their first game of the playoffs, expressed an interest in returning to the team, saying after the season that he felt “this was a good place for me and a team I’d like to be with. We’ll see.”

Cardinals rookie Brendan Donovan displayed different gloves in 2022. His next one will be Gold.

> Baker finally wins World Series as a manager. B3

The Cardinals' Matt Holliday doubles in the first inning, driving in Jeremy Hazelbaker, on opening day at Busch Stadium on Monday, April 11, 2016.