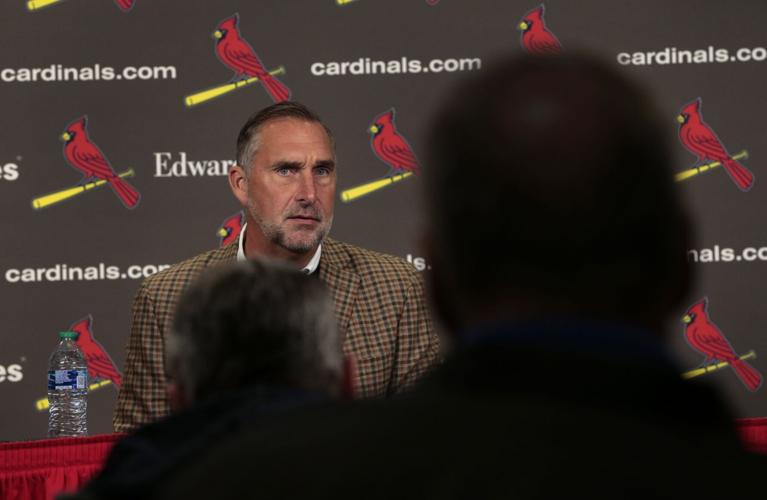 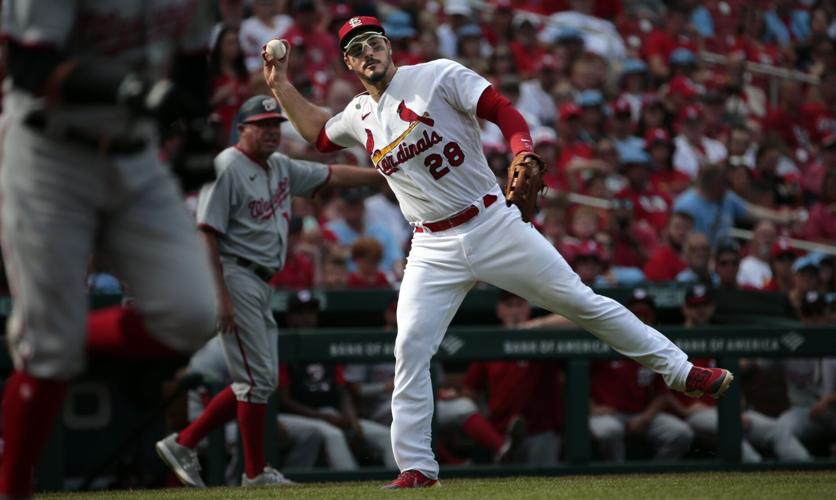 Cardinals third baseman Nolan Arenado handles a ground ball from hit by the Nationals' Ildemaro Vargas in the third inning on Monday, Sept. 5, 2022, at Busch Stadium. 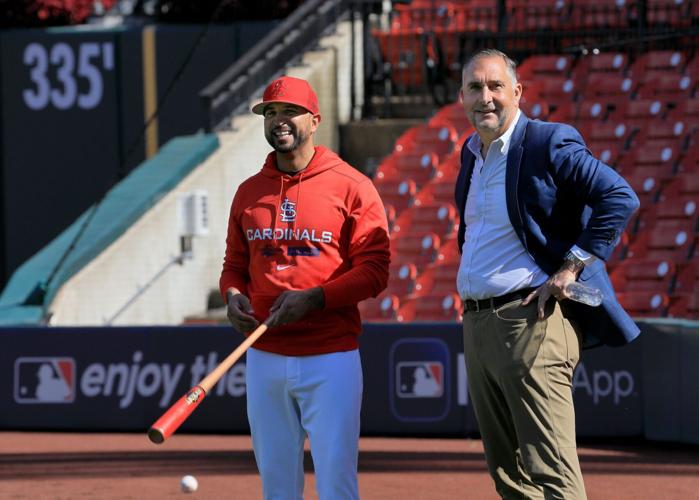 Almost 11 years after he stood at the same spot at the same ballpark to describe the same absence leaving the Cardinals lineup, John Mozeliak sat Wednesday behind a microphone at Busch Stadium and said, yes, replacing Albert Pujols’ production will be essential for the coming season.

They were able to find an answer before.

Doing so again could take them to a place they have not been.

“Clearly that second half, he was really carrying our offense, and now that’s gone,” said Mozeliak, the team’s president of baseball operations. “Don’t have a plan yet. Don’t have something we can go follow. Look at our offense. I think the key is how do you protect (Paul Goldschmidt) and Nolan (Arenado) in that lineup. And that’s just something we’re going to have to look at.”

Two days before the team that ousted the Cardinals from the playoffs — National League champion Philadelphia — begins the World Series, Mozeliak held a news conference chock full of news. The Cardinals disclosed that pitching coach Mike Maddux, seeking a break from years on the daily grind, and hitting coach Jeff Albert, seeking a new challenge elsewhere, had both declined to return to the club and there would be four openings to fill on manager Oliver Marmol’s staff for the 2023 season. The team also announced a one-year agreement with veteran pitcher Adam Wainwright to bring him back for a 19th — and final — season.

If the Cardinals are successful in one of their offseason priorities, Wainwright, who spent a career playing catch with Yadier Molina, will throw to a new No. 1 catcher for the first time. Mozeliak detailed an offseason shopping list that included an everyday catcher, pitching depth and looking for a hitter who would add dimension, depth and damage to the lineup. (Left-handed hitter preferred.)

To accomplish all of that, Mozeliak confirmed what had been expected — an increase in payroll for the 2023 season. As the Cardinals plotted their way out of a pandemic-shortened season and limits on ticket sales, they saw 2023 as a return to what had been steady payroll growth due to increase broadcast-rights revenue. And then they hit jackpot in 2022. Pujols’ return, his second-half thunder toward 700 career home runs and his farewell tour with Molina was good for business, restoring the Cardinals’ ticket-sales attendance to second in the league and ahead of estimates. That revenue will spill over into payroll, Mozeliak said.

“I think the good news is we anticipate our payroll going up next year,” Mozeliak said. “I know it will. Obviously, we had a lot of success at the game this year. So thank our fans for that. I definitely know that our payroll will go up.”

The Cardinals finished the 2022 season around $170 million, per Major League Baseball’s luxury tax calculations. That put them at the 12th-highest payroll, outside of the top 10, where they had ranked often before COVID-19 crowd limits. They also ranked last among the NL playoff teams, 50% lower than the average of the five other teams in the NL bracket. The next closest was Atlanta, which spent more than $210 million.

Eleven Cardinals are arbitration eligible and due raises, but with other contract relief and departures, the Cardinals can exert the power of their purse, if they choose. The Cardinals could see one of the largest single-season leaps in spending and still stay shy of $200 million. They’ll narrow that gap, not close it.

Asked if the bar has risen for spending in the NL and the contest is now to finish in the top two spots to earn a first-round bye in the expanded playoffs, Mozeliak pushed back.

“It’s a long season, and you have to build a roster to do that,” he said. “Asking these sorts of, to me, almost trivial questions on should something make us rethink our strategy or how we go about it? Internally, we talk about things all the time. We know what we can do, what we’re capable of doing. We’re going to be a pipeline-driven organization. We’re still going to try to draft well. And if we can do those things, we think we can continue to have success we’ve had.

“Our payroll is going up. That’s a fact.”

The question wasn’t about changing strategy as much as augmenting it with that increased spending, especially when it comes to answering the offensive need described.

With Wainwright re-signed, the next move for the Cardinals is Arenado’s.

Mozeliak met with Arenado in Southern California on Monday to discuss the third baseman’s opt-out and whether he intended to exercise it or remain with the Cardinals through at least 2027. Mozeliak left “optimistic” about Arenado’s interest in staying and hoping for a swift decision by the nine-time Gold Glove winner. Arenado has until five days after the end of the World Series to make his decision. Mozeliak said he did not expect to restructure Arenado’s contract. Although the contract already does include an option for 2027 that could be guaranteed as a condition of his declining to opt out.

Part of Mozeliak’s conversation with Arenado was mapping out the direction the team planned to go with spending, with additions and with arriving prospects.

For the first time in the 2000s, the Cardinals have an advertised opening at catcher. Mozeliak lauded Andrew Knizner's work as a backup catcher and stressed the organization sees upside with prospect Ivan Herrera, but several times already this offseason he has mentioned a starting catcher as a need for the team.

Mozeliak said the free-agent market will offer “some offensive upside” but the Cardinals do not want “to take a huge step backward defensively.” The Cubs’ Willson Contreras is the top offensive catcher available at free agent, while Christian Vazquez, a defensive-minded catcher who has modeled some of his game after Molina, is also a free agent. Oakland is expected to entertain trade offers for Gold Glove winner Sean Murphy, who is entering arbitration eligibility.

“There are obviously some obvious needs,” Mozeliak said. “We’re going to have to address the catcher. We have to look at how we want to augment the offense.”

Mozeliak referred to changing the “offensive profile” of the lineup, not just finding a way to recreate Pujols’ 24 home runs, 48 RBIs in the second half, and an .895 OPS in his final summer before retirement. Some of that must come from the returning outfielders. Some could come from adding an outfielder, designated hitter, or a middle infielder from the outside. Past superstar slugger Aaron Judge, the free-agent outfield market is thin, but for the second year, there are lineup-altering shortstops expected to be available, like Trea Turner and Carlos Correa. Seeing the power that has shaped this postseason, the Cardinals would like to find a consistent left-handed threat. As Wainwright summarized well Wednesday afternoon: “Big-time impact bats are big in the postseason.”

Mozeliak said any move for a free agent would have to account for the rising young talents the Cardinals see in prospects Jordan Walker and shortstop Masyn Winn. The Cardinals are prepared to invite Walker, 20, to spring training with a chance to win a job in the outfield.

Before the end of October, Mozeliak could identify six returning starters for a five-man rotation, but he fought the urge to trumpet the team’s pitching depth. Lesson learned, he said.

The Cardinals are coming off their 15th consecutive winning season. They’ll likely have the NL MVP and two top-five finishers. They’ll have at least two Gold Glove winners. And yet the chill in the air is their inability to remain in the playoffs long enough to see all the leaves change colors. Starting with a meeting Thursday to decide on 40-man roster moves — including potential releases and additions — the Cardinals will begin another winter of work to avoid a short fall.

“When you really take a minute to unpack 2022, we played September flat, we went into October flat and we got eliminated,” Mozeliak said. “That’s reality. And now I don’t think we have to totally rethink how we build a club. What can we do differently to create more depth or breadth of that lineup, and subsequently, how do you try to avoid those pitfalls?”

Gordo: John Mozeliak vows to stay the course for Cardinals but spend more in 2023

Nolan Arenado will be under contract with the Cardinals through the 2027 season.

The Phillies don't have the pitching depth or defense or experience or fancy record of Houston, but they're unbeaten at home; 5-0 at Citizens Bank this postseason.

Cardinals third baseman Nolan Arenado handles a ground ball from hit by the Nationals' Ildemaro Vargas in the third inning on Monday, Sept. 5, 2022, at Busch Stadium.