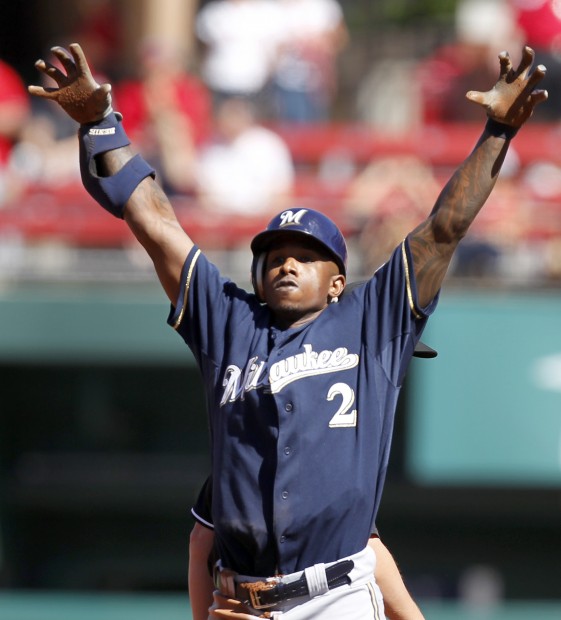 Milwaukee Brewers' Nyjer Morgan reacts as he looks into the Brewers' dugout after hitting a double during the first inning of a baseball game against the St. Louis Cardinals, Monday, Sept. 5, 2011, in St. Louis. (AP Photo/Jeff Roberson) 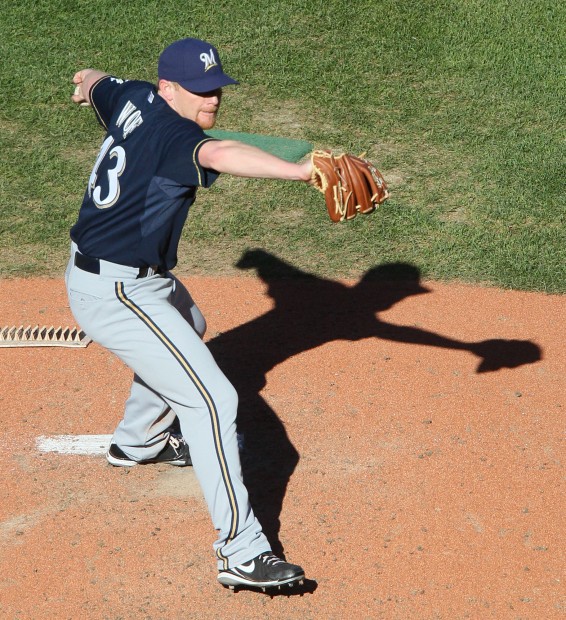 Although they weren't exactly snapping at the Milwaukee Brewers' heels, the Cardinals got the Brewers' attention last week with a fairly one-sided sweep of a series at Miller Park, where Milwaukee had won 76 percent of its games this year.

So, after Milwaukee's 4-1 victory in St. Louis on Monday, which boosted the Brewers' lead back to 10½ games over the second-place Cardinals in the National League Central Division, Brewers manager Ron Roenicke said, "These guys beat us pretty good over at our place, so I think we needed to come back and play a good game. It's important to play well against them.

"With the feeling they had when they left our ballpark, this was an important game for us."

As winning pitcher Randy Wolf said, "It was great to kind of put that series behind us and move on. The one thing about this team is that we have really short memories and we don't panic."

Milwaukee left fielder Ryan Braun, who homered in the third inning, said, "You never want to give somebody hope. We were in a position where we had a pretty dominant lead and they came in and kicked our butts. So they had a sense of belief that they could come back."

Wolf held the Cardinals to four hits and one run over eight innings. He had given up six runs to the Cardinals in five innings last week in Milwaukee, including a grand slam by opposing pitcher Jake Westbrook, whom Wolf bested Monday.

This time Wolf pitched much as he did here Aug. 10 when, again facing Westbrook, he limited the Cardinals to five hits and one run for eight innings.

"It was a tough one to swallow last time," said Wolf, referring to last Wednesday's game. "My fastball was really bad the last game,''

Roenicke thought Wolf's curveball hadn't been too good, either.

"You try to redeem yourself a little bit." Wolf said. "But you don't want to get too down over one start."

Wolf is 12-9 overall and 3-2 against the Cardinals this year. Jim Wolf, his older brother by seven years, would have been the home-plate umpire Monday by rotation on Derryl Cousins' crew.

But with Milwaukee playing here, Wolf was dispatched elsewhere and Dan Bellino had the game.

"Ever since the second half of last year," said Wolf, "whenever he's going to do a Brewers game, they just change the rotation. They just want to avoid any possible controversy that might come about, but I know the last thing he thinks about when he's out there is the Brewers. Or me.

"It's the path of least resistance."

But Wolf said, "He's an awesome big brother. The funny thing is that there's some restaurants in Milwaukee that he loves and he can't eat there."

Braun, one of the Brewers' Most Valuable Player candidates, along with first baseman Prince Fielder, kept his league-leading batting average at .335 and himself on track to be the second player in Brewers history to steal 30 bases and hit 30 home runs.

With 31 steals already, he is three homers short of joining Tommy Harper of the 1970 Brewers in the 30-30 club.

"It would be very appealing," Braun said. "Hopefully, I'll find a way to do it."

A batting title, he said, "also would be pretty cool. Neither was a goal of mine at the beginning of the year."

And then there was flamboyant Brewer Nyjer Morgan, who homered off Kyle McClellan in the seventh inning and unleashed his "Beast" gesture as he rounded the bases.

But no offense to the other team, Morgan said.

"That's just for our team," he said. "If the other team doesn't like it, then they've got to throw strikes if they don't want to see the Beast come out."

Morgan doubles as free spirit and team photographer, snapping a widely seen shot of the Brewers wearing their cowboy outfits they purchased in Houston as they prepared to board their plane Sunday night.

Cards are getting a look at call-ups

Cardinals will get a closer, longer look at select players in their system.

Cards lose as they struggle to see the ball

Shortstop indicates he would strongly consider coming back for 2012 season.

Milwaukee Brewers' Nyjer Morgan reacts as he looks into the Brewers' dugout after hitting a double during the first inning of a baseball game against the St. Louis Cardinals, Monday, Sept. 5, 2011, in St. Louis. (AP Photo/Jeff Roberson)