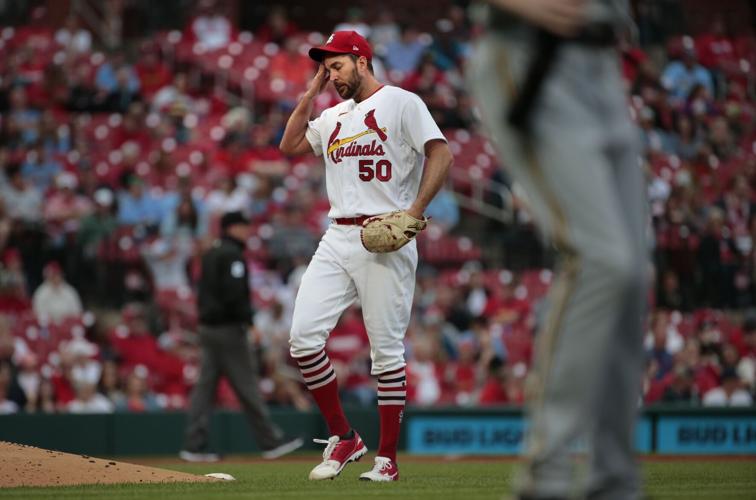 St. Louis Cardinals pitcher Adam Wainwright gives up a Christian Yelich single to score Jace Peterson of the Milwaukee Brewers in the second inning on Thursday, May 26, 2022 at Busch Stadium. Photo by Robert Cohen, rcohen@post-dispatch.com 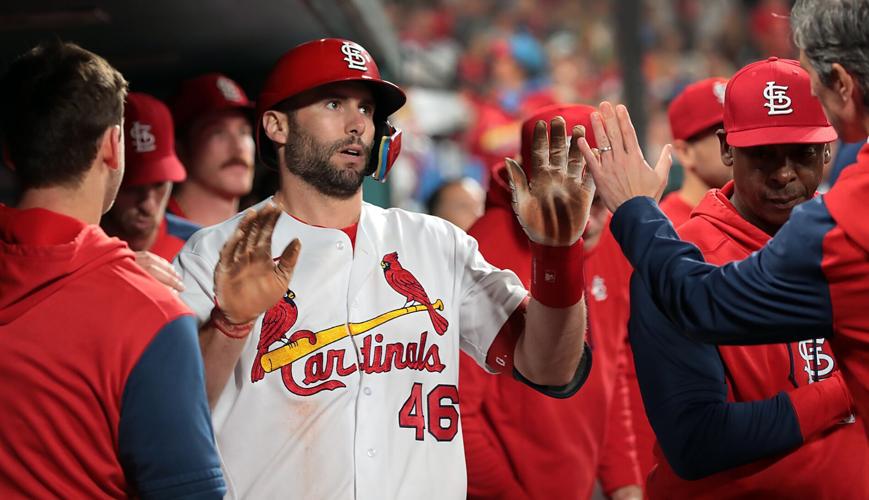 St. Louis Cardinals Paul Goldschmidt is welcomed to the dugout after hitting a solo home run against the Milwaukee Brewers in the seventh inning on Thursday, May 26, 2022 at Busch Stadium. Photo by Robert Cohen, rcohen@post-dispatch.com

Normally, when Adam Wainwright and Yadier Molina hook up as a battery, some sort of record is broken or, at least being challenged. On Thursday night at Busch Stadium, the pair made their 313th start together, three games behind the second-place Milwaukee Braves duo of Warren Spahn and Del Crandall.

Molina put his name in the 2022 books by drawing his first two walks of the season after 92 at-bats without one. But Wainwright, falling to the Milwaukee Brewers 4-3, reached a plateau that he hadn’t reached in his previous 50 starts — and didn’t want to reach.

The 40-year-old, seeking his fourth consecutive win, allowed double-figure hits (10) for the first time since his final start of the 2019 season when he surrendered 12 hits to the Chicago Cubs.

Only three of the four runs Wainwright allowed were earned as shortstop Edmundo Sosa had an uneven night in the field, but Wainwright’s record dropped to 5-4.

“It seemed like a lot of hits,” said Wainwright. “Nothing but runners on. Ducks on the pond the whole time. But, sometimes, it’s like that.”

His strike-ball ratio was good, 70-30. The issue was that he averaged precisely 20 pitches an inning as he endured only five.

“They’ve got a really good approach off me,” said Wainwright. “I need to switch it up a little bit.”

Manager Oliver Marmol said the biggest difference he deduced from Wainwright’s night was that there weren’t as many swings and misses at his curveball,

The Cardinals took a run in the ninth at Josh Hader, the Brewers’ record-setting closer who posted his 16th consecutive save from the start of the season and 37th consecutive scoreless outing over two seasons.

Tommy Edman singled for his third hit of the night and only the third all season off Hader in 16 games. After Paul Goldschmidt fanned, Nolan Arenado walked on a full-count pitch. But Albert Pujols fouled out and Juan Yepez popped up.

With Edman at second and Arenado at first with one out, the double steal was possible but Pujols quickly went down in the count 0-2 and the time had passed. Marmol admitted the double steal had crossed his mind.

“There’s value in doing it there,” said Marmol. “Is there risk? Yes. If you pull it off successfully, you’ve got second and third with one out. If you don’t, you’re still a base hit away from tying it. There’s a plus side to being able to do it there.”

Second baseman Kolten Wong was holding Edman close at second but Marmol said that didn’t matter. “I usually don’t care where the infielder is when I’m taking my lead,” Marmol said.

“It’s the pitcher’s ability to turn and go (to the plate). You can be standing on the bag and it doesn’t make a difference, in my opinion.”

The Brewers, who increased their National League Central Division lead to 4½ games over the Cardinals, jumped Wainwright for two runs in the first, featuring a home run by Luis Urias. That came with one out and then, with two out, the Brewers strung together three singles.

The second of those, Rowdy Tellez’s looper to short left, might have been caught but novice left fielder Yepez pulled up when shortstop Sosa raced deep into the outfield and appeared to startle Yepez. The ball dropped between them.

Marmol said, “I’m not sure if (Sosa) startled him or kind of called him off it. But (Yepez) definitely did slow down as he was coming in.”

But the Cardinals quickly rebounded to tie the score.

Edman doubled to left center off left-hander Eric Lauer and, after Goldschmidt walked, Edman moved up on Arenado’s fly to right. Edman scored as Pujols lashed his 3,317th hit, two shy of ninth-place Paul Molitor, a former Brewers star, on the all-time list.

The big part of this play was that Goldschmidt, not fearing the arm of left fielder Christian Yelich, never hesitated in going to third and Yelich instead threw to second. Goldschmidt scored easily on Yepez’s sacrifice fly.

“There’s particular teams and outfielders we’re more aggressive with,” Marmol allowed. “This is one of them and that was an example of it. I think our guys have established that they’re going to take 90 feet whenever it’s given. We’ll try to expose every part of the game possible.”

Sosa moved in front of third baseman Arenado to field Urias’ grounder in the second and, on the run, threw across his body, and wide of first. Goldschmidt couldn’t help him and Urias was safe on the error. Yelich took advantage with a run-scoring single to right.

Wainwright pitched around a two-out double by Omar Narvaez in the third. But he missed on a close 3-2 pitch to Yelich in the fourth, moving Wong to second with two outs. Andrew McCutchen moved Wong home with a single to left center.

That marked the third run scored with two out against Wainwright on Thursday, matching the three he gave up in Milwaukee on April 14 in a 5-1 loss.

“That bugs me a lot,” Wainwright said. “I’ve just got to do a better job with two outs. They’re doing a good job with their two-out approach against me. Two strikes, too.

“They’ve adjusted to me. “I’ve got to adjust to them. Three two-out runs is really what it comes down to.”

Wainwright still is 20-14 in his career against Milwaukee but this year he is 0-2 with a 6.75 earned run average against the Brewers and he is 5-2 with a 2.34 ERA against everybody else.

“It’s a head-scratcher,” he said. “I’ve got great career numbers off that team over there but the last few times they’ve made me work really hard.”

The Cardinals didn’t have a hit after Goldschmidt, who extended his hitting streak to 17 games with his single in the second, until the seventh. Then, Goldschmidt hit his eighth homer of the season and it was a parabolic one, with a launch degree of 40 degrees.

There was one more milestone for Wainwright and Molina. In the fifth inning, for the first time, the pair used the new electronic PitchCom communication system, so as to better safeguard the pitcher-catcher signals.

“I liked it,” said Wainwright. “Unfortunately, the game is in a way where if you don’t use PitchCom, you’re kind of silly because everybody’s relaying everything. It takes away from the best part of the game, too. Hitter versus the pitcher is the best part of baseball.

“(But) I’m all for whatever allows me to throw a pitch without anyone else knowing what I’m throwing besides the catcher.

“They had 10 hits (nine through four innings). Might as well throw it out there and see what happens. Throw everything at the wall and see what sticks.”

St. Louis Cardinals pitcher Adam Wainwright gives up a Christian Yelich single to score Jace Peterson of the Milwaukee Brewers in the second inning on Thursday, May 26, 2022 at Busch Stadium. Photo by Robert Cohen, rcohen@post-dispatch.com

St. Louis Cardinals Paul Goldschmidt is welcomed to the dugout after hitting a solo home run against the Milwaukee Brewers in the seventh inning on Thursday, May 26, 2022 at Busch Stadium. Photo by Robert Cohen, rcohen@post-dispatch.com