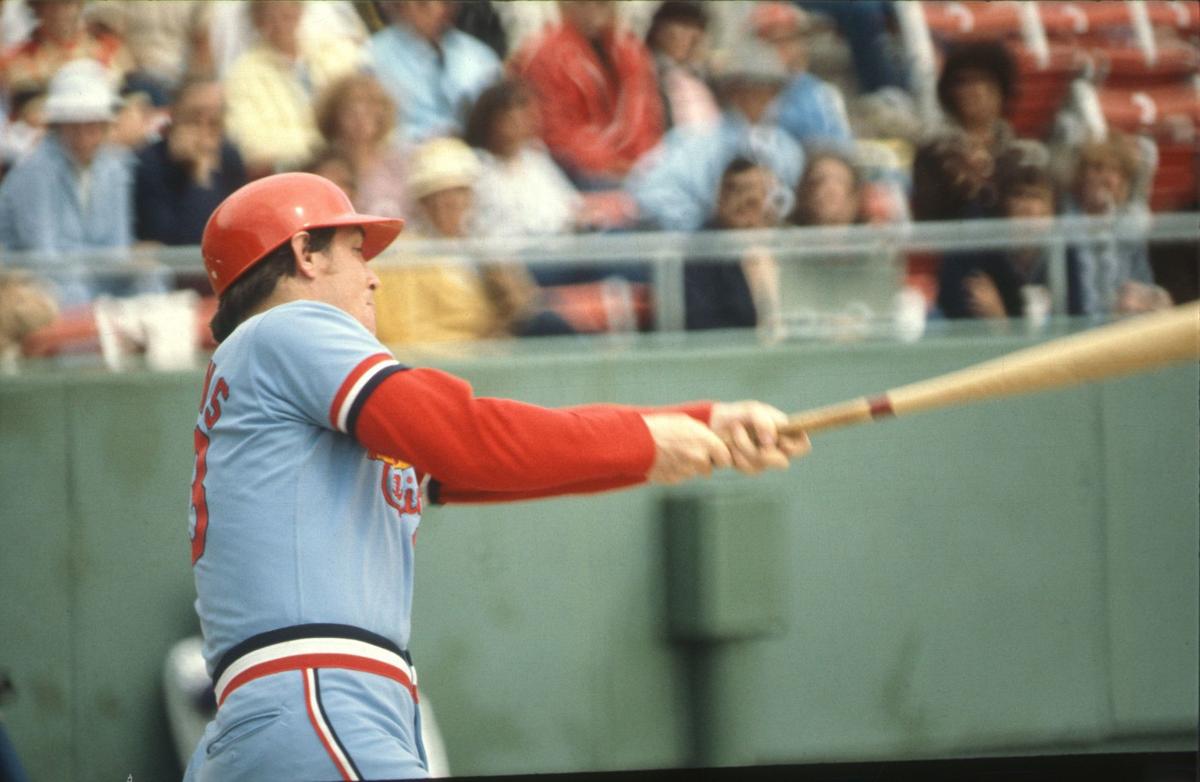 Cardinals catcher Ted Simmons lines a hit during a 1978 game against the Mets at Busch Stadium II. (Post-Dispatch file photo) 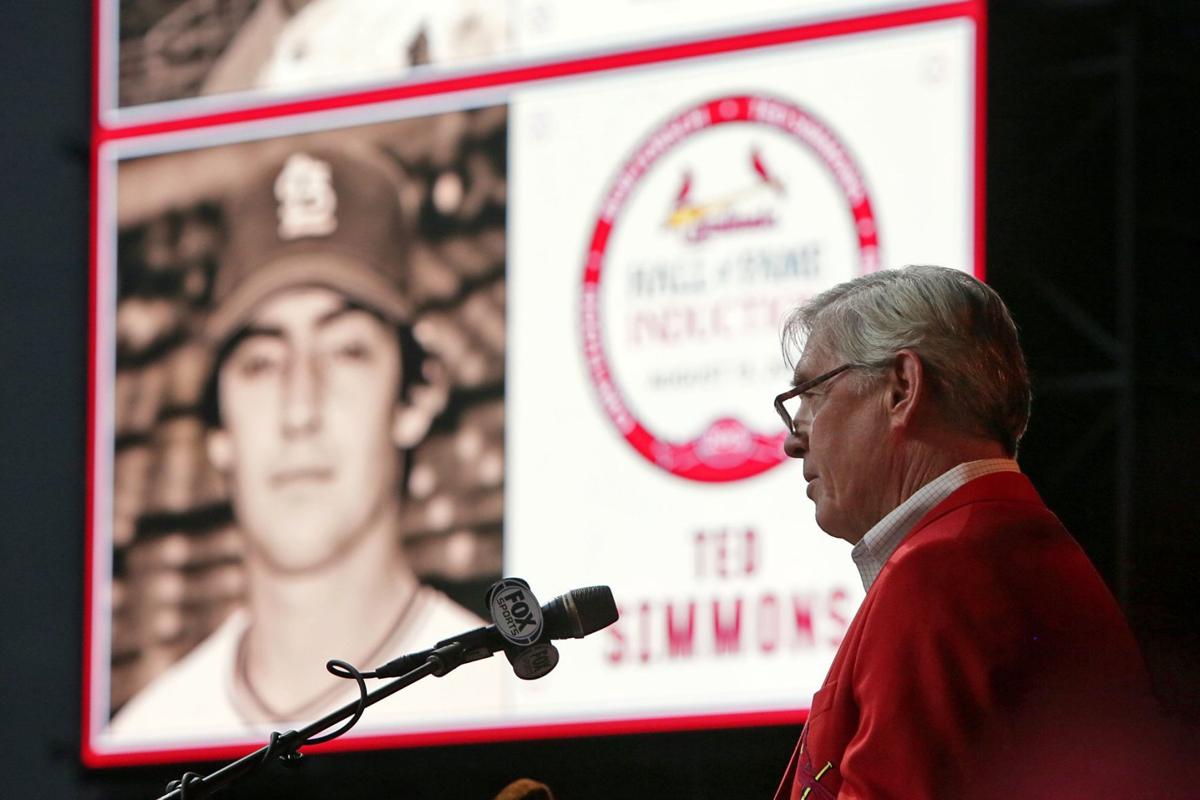 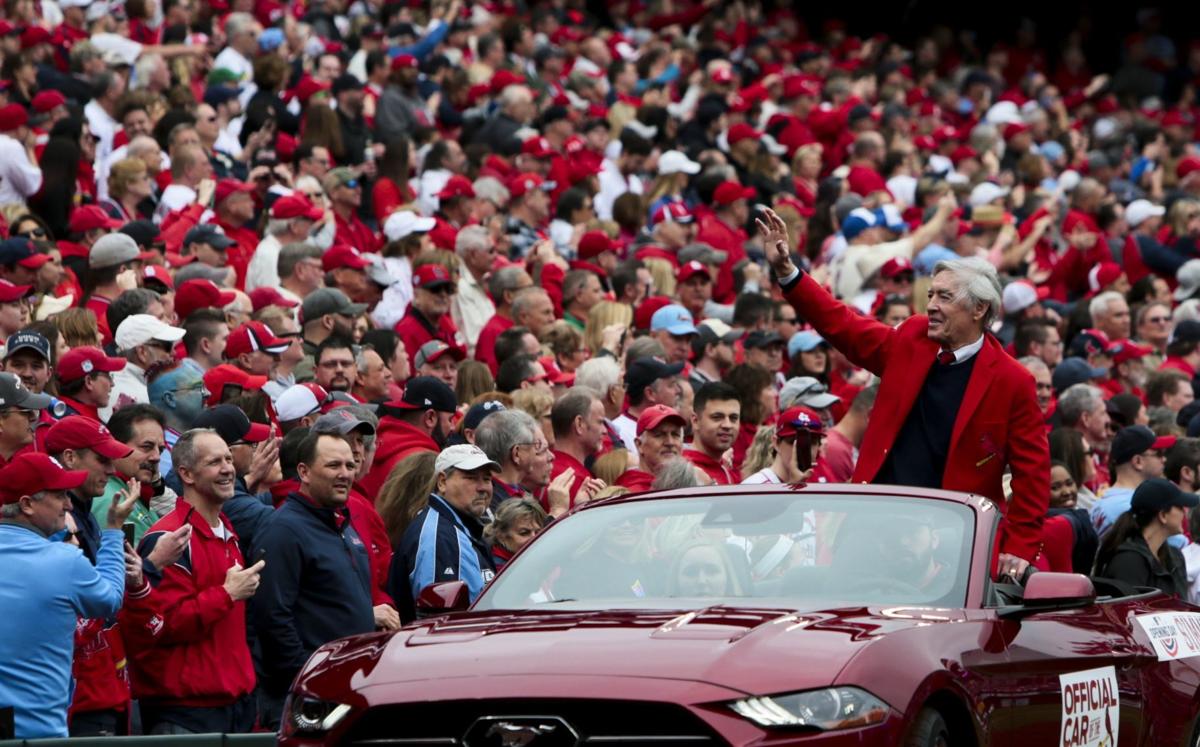 The wait had been 25 years for Ted Simmons.

After the former Cardinals star, one of the top-hitting catchers and switch-hitters of all time, had been knocked off the baseball writers’ Hall of Fame ballot after just one election in 1994 and after he had failed to gain enough favor in three different veterans’ elections, the 70-year-old Simmons finally received the ultimate individual prize for a player Sunday.

The Hall of Fame’s Modern Era 16-man electorate, in an announcement emanating from the baseball winter meetings in San Diego, gave Simmons 13 out of 16, one more than was needed. Simmons joined former players' association executive director Marvin Miller (12 votes) as new members of the Hall who will be inducted next July 26 in Cooperstown, N.Y.

The last time, the Modern Era veterans’ committee had met two years ago, Simmons missed by one vote of election. Miller will be inducted posthumously.

“This is a great, great day in my life,” Simmons said on a conference call. “It makes for a long day and a difficult day at times, but when I finally got the call, it was real special.

“There’s never too long a time to wait if you finally make the leap. And today, I finally did.”

Simmons had 2,472 career hits overall to go with 1,389 runs batted in and a .285 average, with 1,908 of those hits as a catcher, which is fourth on the all-time list. The overall hit total ranks second behind Hall of Famer Pudge Rodriguez for any player who had catcher among his primary positions.

Photos: A look at the career of Ted Simmons, baseball's newest Hall of Famer

Ted Simmons, one of the most accomplished hitting catchers in MLB history, was elected into baseball's Hall of Fame on Sunday.

From 1971-80 with the Cardinals, Simmons averaged .301 with a .367 on-base percentage. He finished in the top 10 a combined 15 times in either batting average, on-base percentage and slugging percentage, compared to Hall of Fame catchers Carlton Fisk (nine times), Johnny Bench (six) and Gary Carter (four).

His best offensive year with the Cardinals was 1975 when he drove in 100 runs and batted .332, second in the National League. As a catcher, he handled two no-hitters, one by Bob Gibson in 1971 and the other by Bob Forsch in 1978.

Over the past couple of decades, Simmons gradually had been viewed in a different light, with the accelerated use of analytics, specifically in the areas of on-base percentage and Wins Above Replacement. “I have to be honest,” said Simmons. “If it weren’t for the analytics people, my career as a potential Hall of Famer probably would have been shut down and forgotten about a long time ago."

Added to his 13 seasons in a Cardinals uniform (1968-80), Simmons played five years with the Milwaukee Brewers, homering twice in St. Louis in the 1982 World Series, his only Series appearance, and three years as a part-timer with the Atlanta Braves, for whom he scouts today.

And some of you will remember him as the general manager of the Pittsburgh Pirates, the last time the Pirates made it to the National League championship series in 1992. He had to give up that job the next year because of heart problems but stayed in the game, mostly as a scout, although he was a bench coach for San Diego and Milwaukee. Prior to moving to Pittsburgh, Simmons was in charge of player development for the Cardinals and later he had the same job with San Diego.

Yet, Simmons disappeared from the Baseball Writers’ Hall of Fame ballot after 1994 when he got only 17 votes out of 456, or six fewer than the required five percent to stay on the ballot. That surely delayed his entrance into the Hall by many years.

“When I got under four percent, that was referred to as ‘one and done,’’’ said Simmons. “Now that I’ve been elected, I’ll be the first ‘one and done’ to have survived that. It still kind of sits there on your shoulder.

“Somebody walks up to you and says, ‘How many years were you voted on?’ You say one and they say. ‘What are you talking about?’ But that’s the way it was. I didn’t get five percent of the vote.

“How do you deal with it? You look forward to it with anticipation and excitement and if you’re not selected. . . terrible disappointment. But that’s over for me now. I couldn’t be happier about it.

“How am I dealing with it? It’s wonderful. You look back at it all and I say it was supposed to be just like the way it is.

“I tell people I’ve lived a charmed life. My whole life has been charmed. Since I was a little boy, I wanted to be a major league baseball player, just like millions and millions of other people. I got to do all that. So, in the past years, when I was not elected to the Hall of Fame, I couldn’t in good conscience walk around with a chip on my shoulder.

Elected to the Cardinals’ Hall of Fame in 2015, Simmons took the next step—a big one—on Sunday. For Ted Simmons, life begins anew at 70.

He will be honored at the 62nd St. Louis Baseball Writers' dinner on Jan. 19 at the Marriott Grand Hotel.

Simmons, who didn't sign a contract until August 1972 in his protest of what the Cardinals had offered, was delighted to be elected along with famed labor chief Miller, with whom he had consulted before holding out that year, his second as a regular.

"What Marvin was so special at doing.  . . was that he was willing to listen to everybody's view," Simmons said. "Marvin would patiently wait for every single player to speak their mind.

Hochman: Why Simmons belongs in the Hall of Fame

Cardinals' Kim is back in St. Louis, might be permitted to return to South Korea to see family

Coronavirus cases have dropped sharply in his homeland. He might go there to be with his wife and two small children.

Cardinals demote Reyes, Cabrera to Class AAA as part of moves on what would have been opening day

Knizner and Fernandez also optioned to Memphis as MLB teams continue to make moves to narrow rosters toward their eventual 26-man limit.

With delay in start of season to be much longer, Cardinals' DeJong feels conflicted

Shortstop understands why caution has to be observed in wake of coronavirus outbreak but said it felt like a 'punishment' if players can't work out in groups at the facility.

Cardinals catcher Ted Simmons lines a hit during a 1978 game against the Mets at Busch Stadium II. (Post-Dispatch file photo)