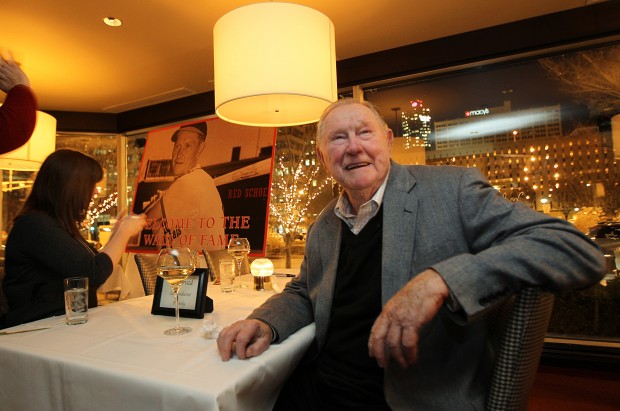 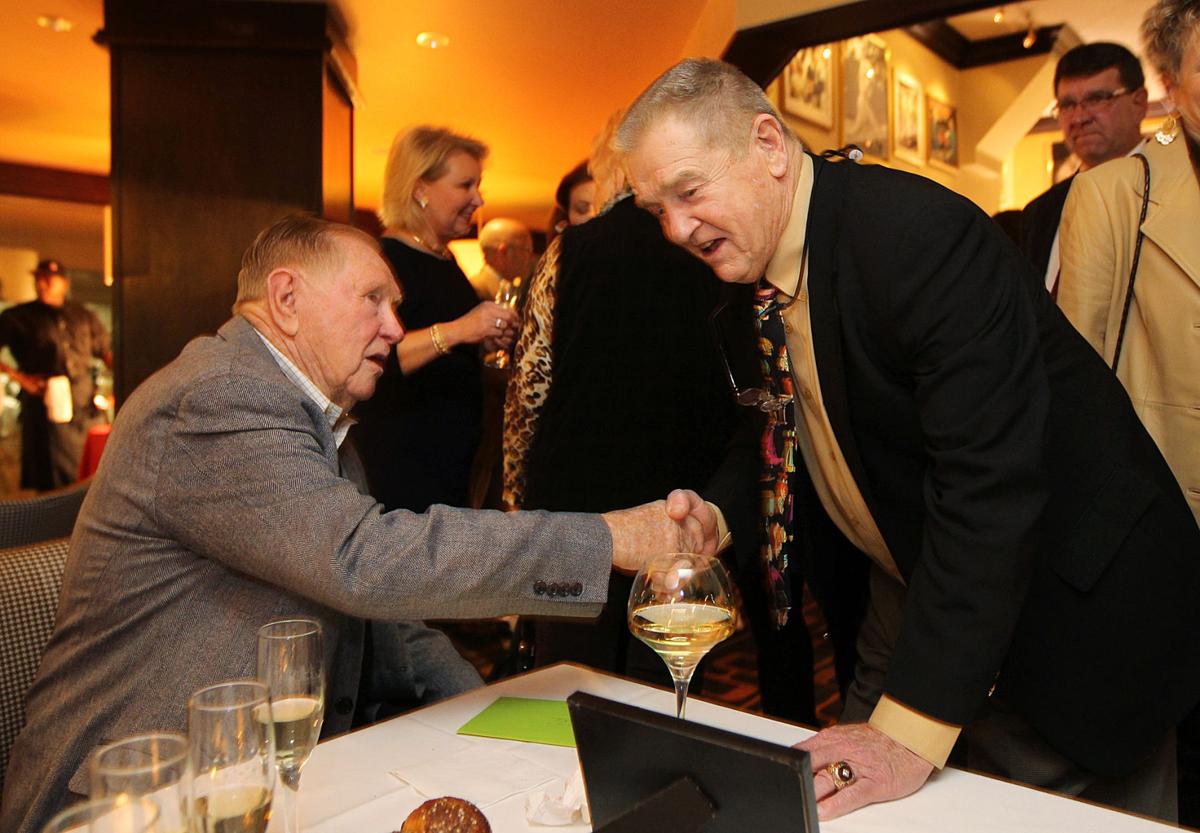 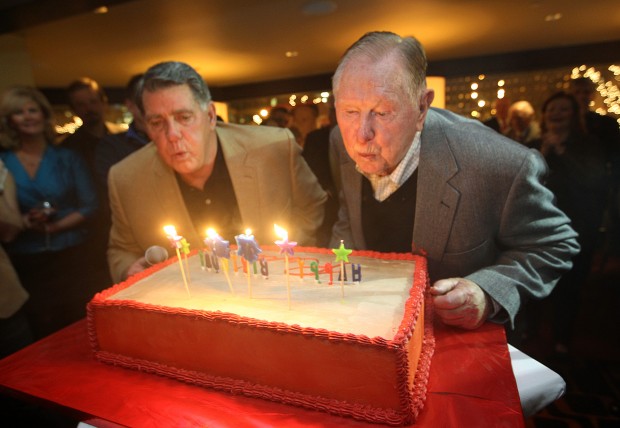 Editors note:This story originally appeared in the Post-Dispatch on Jan. 19, shortly before the death of Stan Musial.

Whether or not folklore groundhog Punxsutawney Phil sights his shadow two weeks from now on Feb. 2 traditionally means six more weeks of winter or an early spring. In any event, that day will signify the 90th birthday of Albert Fred “Red” Schoendienst and also six more weeks of the Hall of Famer in uniform during Cardinals spring training.

Schoendienst, at 89 and change, is fifth in age among the living Hall of Famers, with fellow Cardinals Hall of Famer and longtime teammate Stan Musial third at 92.

Musial, whose health and number of public appearances have declined in recent months as he has been in and out of the hospital, ranks behind former Boston star Bobby Doerr (94) and Monte Irvin (93) and ahead of Ralph Kiner, who is 90.

“I’d like to see Stan doing a little better than he is,” said a subdued Schoendienst, who roomed with Musial for 10 years while both played with the Cardinals in the 1940s, ’50s and ’60s.

Schoendienst, who was feted Friday night with a pre-90th birthday party at Mike Shannon’s Steaks and Seafood restaurant, surely couldn’t have imagined this long a life after the 1958 season when he became ill with what later was diagnosed as tuberculosis while he was playing with the National League champion Milwaukee Braves.

“Of course, I couldn’t imagine having a cellphone in my back pocket either,” Schoendienst joked.

By the time the 1958 World Series was over, Schoendienst, then 35, could barely make it home to bed, and the doctors were satisfied that his problems went deeper than pleurisy. But his wife, Mary, was going to the hospital for her fourth Caesarean section childbirth procedure. Schoendienst had not wanted to worry her earlier about his condition, and he insisted that the doctors delay his visit to the hospital until Mary had had the baby.

When his son was born, Schoendienst was photographed at the hospital, looking through the glass. When the cameramen had wanted Red to hold the baby, he said, “I’ve got a cold.”

The following week Schoendienst was in a sanitarium. The diagnosis was tuberculosis.

Schoendienst, an avid hunter, was put on bed rest and told barely to move, if at all. After four months and some experimental medicine treatments at the St. Louis County facility then known as Mount Saint Rose Throat and Chest Hospital, which specialized in tuberculosis patients, Schoendienst was deemed ready for surgery.

Schoendienst said Friday that a list of four or five doctors was presented to him but that when he heard the background of Dr. Joseph Lucido, who he heard had sold newspapers near one of the area bridges in order to afford his schooling, Schoendienst said, “That’s the guy I want.”

Lucido removed the diseased top segment of Schoendienst’s right lung, and he was back playing with the Braves in September 1959. But the surgery was not without incident.

“He did a great job, but when Mary saw him on the elevator before the surgery, she saw that he had cut himself shaving. She yelled, ‘You’re operating on my husband and you cut yourself shaving?’ ” said Schoendienst, chuckling as he retold the story.

“I was really fortunate when they were able to catch (the TB),” said Schoendienst, who went on to play several more years before becoming a coach with the Cardinals, then managing them for 12 years and then, after coaching for Oakland for two years, returning to the Cardinals as a coach, occasional interim manager and then a special assistant to the general manager, a position he fills now.

“His number’s retired. He’s not,” a sign hanging in former manager Tony La Russa’s office used to say. This was in reference to Schoendienst’s No. 2 being retired officially but Schoendienst’s wearing it every spring training during workouts and also during the season before home games at Busch Stadium. This will be his 69th season in a big-league uniform.

Former Gold Glove center fielder Jim Edmonds said La Russa made it a point to address Schoendienst’s presence at the start of every spring training.

“I was talking to Mike Shannon and Mike was talking about physically strong Red is when he goes hunting and through the ponds. People can’t keep up with him. He was playing golf at 80 years old when I got here and he hasn’t slowed down one bit.”

Whitey Herzog, who had Schoendienst on his staff during the 1980s and then turned the reins over to him as interim manager in 1990 when Herzog resigned, said, “When I was growing up in the ’40s across the river (New Athens, Ill.), Musial and Schoendienst were the Cardinals. They kind of went hand in hand.

“I knew Red and the Schoendienst brothers from Germantown (Ill.) When Red would come home from the minor leagues, we’d play (against the Schoendiensts) for a keg of beer.”

Schoendienst’s first spring training with the Cardinals was in 1945, but that didn’t go as scheduled. During war time, the teams weren’t training on Florida’s coasts, so the Cardinals prepared to train in Cairo, Ill. — until the floods came and more than a foot of water seepage covered the practice field.

Schoendienst had been assigned a fourth-floor room at the four-floor Cairo Hotel, but when he heard that the dams had been flooded, he shared the sentiment of others on the Cardinals, saying, “Get me out of here.”

Soon, the Cardinals were headed back to St. Louis to practice at Sportsman’s Park.

And some 68 years later, Schoendienst will leave St. Louis again and report to Jupiter, Fla., which has it all over Cairo.

The practice fields are numerous and the clubhouse facilities spacious. Of his first dressing quarters, Schoendienst said, “I had a nail.”

Schoendienst doesn’t have many responsibilities, other than to observe. Observe veterans trying to hang on to jobs. Observe rookies trying to win them.

“When there were just eight teams in each of the big leagues, I was always told, ‘It’s hard to come up but it’s just hard to stay in the big leagues,’ ” Schoendienst said.

“I tried to work as hard as I could to make sure that didn’t happen.”

Herzog, asked to define Schoendienst’s place in Cardinals history, said, “Think about how many years he’s been in the Cardinals uniform, getting traded to the (New York) Giants, going to Milwaukee, coming back here managing and then getting fired, and then he went with Charlie Finley (in Oakland). But he ended up here. (Former owner) Gussie Busch said he had a lifetime job here.

“(Busch) told me I had a lifetime job — but it was his (lifetime),” said Herzog, jokingly.

Weaver dies at 82; St. Louisan left his mark on baseball

Former Beaumont star became Hall of Fame manager with Orioles after failing to beat out Cards' Schoendienst on field.

Today marks  the 90th birthday of Albert Fred “Red” Schoendienst - the Cardinals Hall of Famer. Take a look back at his career.

They call him "The Old Redhead" and at 90 years young, he has spent 68 of those years in a Cardinals uniform. Red Schoendienst is a St. Louis …

Cards move toward deal with Motte; difference between club's offer and third baseman's figure is 56 percent.

Rising interest in younger players is reflected in the price of their autographs at Cardinals' Winter Warm-Up.