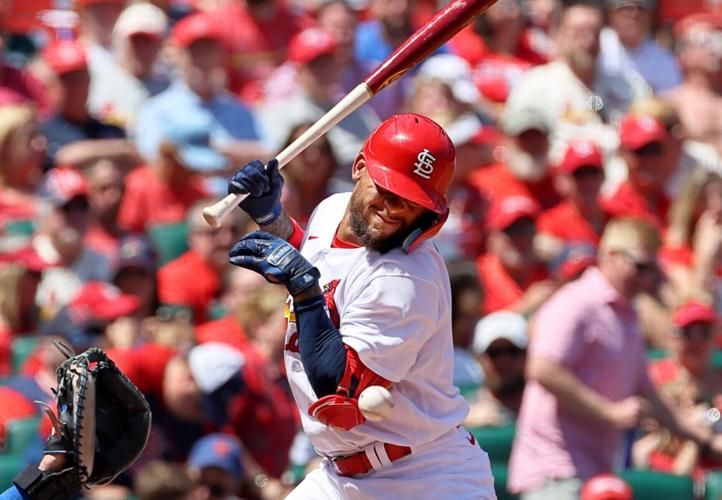 Edmundo Sosa (63) of the St. Louis Cardinals grimaces as he is hit by a pitch in the fourth inning during a game between the New York Mets and St. Louis Cardinals at Busch Stadium in St. Louis on Wednesday, April 27, 2022. Photo by David Carson, dcarson@post-dispatch.com 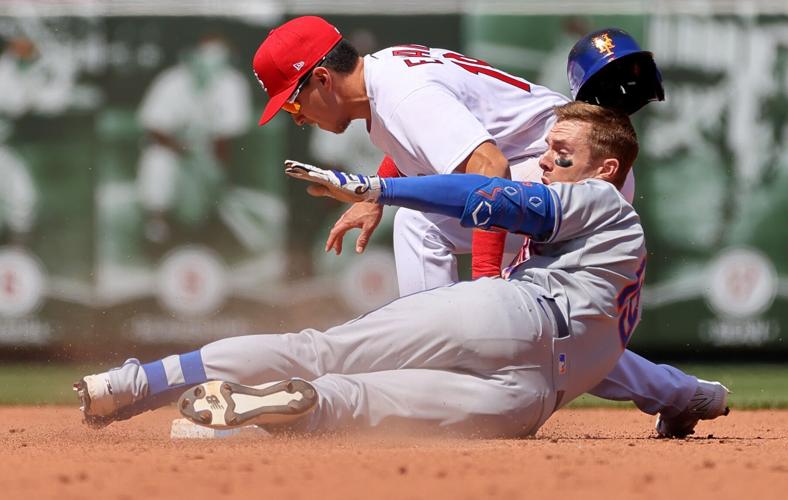 NEW YORK — The storm expected when the Cardinals arrived in Queens for a four-game series against the New York Mets proved out to be more literal than originally forecast.

As the two teams prepped for to face each other for the first time since a fracas at Busch Stadium, an exchange of several hit batters, and a brouhaha that resulted in the suspension of two Cardinals and no Mets, the first game of the series was postponed due to poor weather.

Monday's game will be part of a scheduled doubleheader Tuesday starting at 2:10 p.m. St. Louis time.

Both games will be at least nine innings.

The Mets preemptively called the game shortly after Jack Flaherty finished a flat-ground throw out in left field at Citi Field. Mets pitchers also go early work in ahead of the storm that was expected to arrive around first pitch.

The Cardinals have Miles Mikolas available to start one of the two games and Steven Matz was the announced starter for Tuesday's game. Manager Oliver Marmol said he and pitching coach Mike Maddux would meet later Monday afternoon to determine how to set up the pitching for the entirety of the day.

Both teams will have a 27th man added to the roster for the game.

Donovan's RBI double and Edman's solo homer is only scoring for first half of game. Hudson throws five scoreless.

Rookie has forced a rewrite of recent lineups with his production, reaching base in nine of his past 13 plate appearances, doubling home first run Saturday.

Hicks pitches a career-high five innings and 77 pitches to continue building toward a role in the rotation, but lineup continues recent fade.

Wainwright was cleared from the COVID-19 IL in time to throw a bullpen Thursday, make case to start Sunday, and attend Blues' game Thursday night.

A whiff of trouble: Cardinals strike out an unlucky 13 times and fall, 3-1, to Mets in Game 1

O'Neill returns to the lineup after two days to find his timing. Cardinals bring back lefty Naughton to be the 27th man for the doubleheader.

Edmundo Sosa (63) of the St. Louis Cardinals grimaces as he is hit by a pitch in the fourth inning during a game between the New York Mets and St. Louis Cardinals at Busch Stadium in St. Louis on Wednesday, April 27, 2022. Photo by David Carson, dcarson@post-dispatch.com